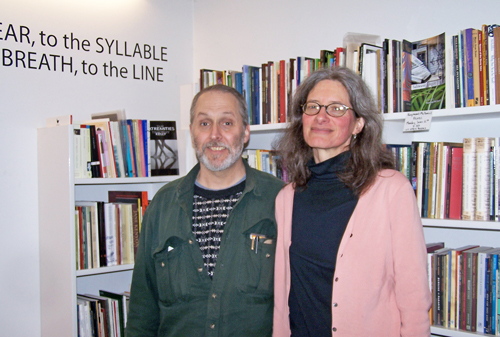 John Marshall and Christine Deavel, owners of Open Books, in 2008.

In case you missed it, Seattle's Open Books is up for sale. The owners of the poetry-only bookstore located in Wallingford are offering "its stock, its name, and perhaps a reasonable lease," as reported in the Seattle Review of Books.

My connection with this bookstore spans a decade and encompasses articles in three different publications. Besides my passion for poetry, I was fascinated by their business model and by the fact that both owners are also poets themselves.

I'd first discovered Open Books when I wrote about independent bookstores for Seattle Woman in 2007. Out of the 12 bookstores profiled in this piece, three have since permanently closed (Abraxus, Cinema Books, and Epilogue), and two others are fighting for survival through crowdfunding campaigns (Seattle Mystery Bookshop and Wide World Books and Maps). At the time, I reported that Open Books was one of only two poetry-only bookstores in the U.S. At least two more have since opened, in Boulder, Colorado, and in New York City, making Open Books still a rarity, especially in this digital age.

Here's what Marshall had to say back then:

“We wish there were more of us, but that’s not up to us,” says co-owner John W. Marshall. “In our darker days, we think of poetry as culturally vestigial,” he says of himself and partner Christine Deavel. “It’s something that may fall off through evolution.”

At that point, the bookstore had consistently turned a profit, and according to the email that went out a month ago, that is still the case. "This transition need not happen quickly; the decision was not based on economics or health," Marshall wrote.

Marshall and Deavel have long been sponsors of the Seattle Arts & Lecture series, and that's part of the Open Books business model, too. In my interview with Marshall for Poets & Writers in 2008, he explained:

The Seattle Arts and Lectures work is great for us, but it's economically great for us. While that's supporting the community, it's supporting the bookstore. Anything that supports the bookstore to some degree supports the community. At least it means that people can come here and find a relatively obscure book and find people willing to talk about aspects of poetry when it's difficult to find people who will do that outside the academy, or even inside the academy in some cases.

I wonder if the SAL sponsorship is somehow part of the torch being passed here, or just how that will shake out when the present owners are no longer selling books. Marshall has said he wants to stay involved with Open Books in some capacity.

The bigger question is that part of what works for Marshall and Deavel is that they own the building that houses the bookstore. As I reported in Crosscut in 2008:

The two admit that what really makes a difference to their bottom line, however, is the fact that they own the building that houses their shop. Purchased in 1993 for less than $150,000, it’s an old Craftsman-style house on busy 45th Street, a few blocks from the Wallingford neighborhood main drag. The shop is in what used to be a single-car garage facing the street. The house above they’ve always rented out to tenants; there once was a wine bar and cafe upstairs. Now Deavel and Marshall are renovating the house and preparing to move in.

So, with these factors noted, it might surprise you to know that the response to the call was pretty overwhelming, with more than 30 offers to purchase the store in the owners' hands within a day and a half of their announcement. As Paul Constant reports, the owners are currently in talks with an unnamed prospective buyer, someone who's very passionate about poetry and is a regular customer but who also apparently has the resources to take on the business, which was not the case with most of them. As Marshall told the Seattle Review of Books, “Most were well-meaning and thoroughly ill-thought out, and that’s fine. People’s hearts are very large organs, but their bank accounts may not be." 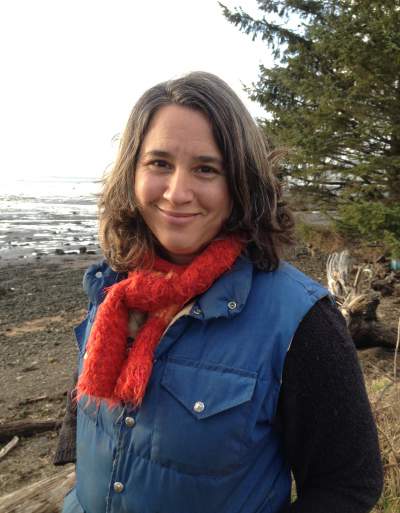 Today I'm thrilled to have a guest poet on the blog, Nancy Slavin, who indie-published her collection last year under the Bay City Books label. She's detailed her decision on this, including the costs to print the books herself, in the post "What You Love Has Value." It's a story that resonated with me since my own poetry publication is 100% a labor of love. Reading the exquisite poems in Oregon Pacific, I can't help but wonder at the voices we lose with so few opportunities for poets like Nancy. Working with traditional forms such as the sonnet, sestina, and ode, she calls to mind both the subtle and dramatic rhythms of the Northwest coast, a place where "the foghorn alone has discipline."

Here's a sample poem from the collection.

You are a new soul

that for eons wind has blown

bereft of your home,

left only the hurt

You wonder if this lot

is a perennial mistake.

For the ache of your body

stretched toward the sun

But all around, each hour,

more are being captured.

which, in spite of fear,

by the light on which they feed

open to the air 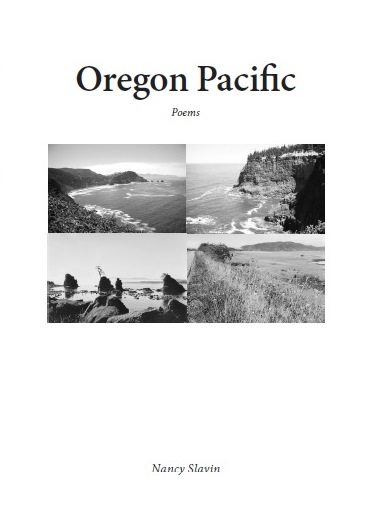 You can purchase a print copy of Oregon Pacific through Nancy's Web site, and she will send you a signed book if you do.

Nancy and I met in an online writing community and have been each other's editing coaches for the past few months. I value her feedback on my early drafts and pitches. In addition to Oregon Pacific, she's also authored a novel, Moorings, which won the first place prize for the Nina Mae Kellogg Award for Graduate Fiction at Portland State University. She is an English teacher and violence prevention educator who lived on the Oregon coast for twenty-plus years.