Vote for a Cover, Win a Free Book!
What's the Motive? Corrina Wycoff

Cover Reveal: Bound to the Truth Ta-da! You're looking at the cover for the next book in the Dreamslippers Series. Bound to the Truth releases November 11!

The Dreamslippers are a family of PIs who solve crimes using their ability to 'slip' into your dreams. But that isn't easy.

In Bound to the Truth, the dreamslippers are hired to investigate the murder of an up-and-coming Seattle architect. Did Nina Howell really fall under the spell of a domineering, conservative talk show host--as her wife claims? Or will Nina's buried past lead the dreamslippers down a twisting--and twisted--path to the truth? Find out as they chase a killer while navigating the kinky Seattle dating world. When Cat and Granny Grace hit the fetish scene, hilarity is sure to ensue!

The novel is now available to pre-order, which you should do because you want to see me live to write another book.

Thanks to everyone who voted for a favorite cover. In contrast to my previous cover vote-a-thons, this time there was no clear winner, with three tied for first place, earning 22 votes each. 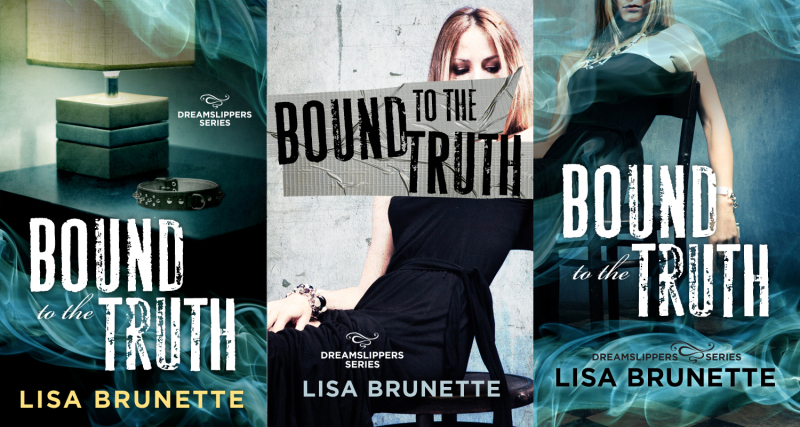 We considered all three of these very carefully. In the end, we decided on #4, but with the colored smoke effect from both #1 and #5 added, which I believe drew a lot of people to choose them since it made those covers a better match with the first two books in the series. We love, love, LOVE the new cover, so thank you for your votes, ideas, and arguments.

We've never had a tie before, so this was new territory. Since the final cover is #4 with aspects of #5 and #1, everyone who voted for all three will get a free ebook copy of Bound to the Truth when it releases November 11. You're welcome! And all of those voters' names will go into the pot for the drawing for the signed print copy. This applies only to voters who followed instructions and sent their votes by email, by the way, or voted on the blog, which auto-sends me a note with an email address attached. I'm a one-woman shop here and can't track voters down across all social media, yo.

If you didn't vote for #4 and are all like, "wha...?", here's a peek inside our decision to pick that one out of the three-way tie.

Ultimately, I balked at the idea of putting a collar on the cover, both because several voters said it screamed "50 Shades" (a reaction I'm not actually going for here) and because it doesn't quite fit the plot. I also liked the idea of continuing a human figure on the cover, and I wasn't opposed to showing more of her even though the first two covers don't. The problem with #5, though, was that the female figure resembles neither of my protagonists nor the victim, so what exactly would that foreshadow?

A couple of other points about the three above. A few voters said they didn't like the cursive "to the," and I agreed. As much as I love that nightstand, cover #1 didn't seem to mesh enough with the first two books in the series, plus the collar issue.

We got some interesting ideas out of the mix, like this variation in which voter Stan Brown tried to make more of an obvious handcuff out of the bracelet in #5: 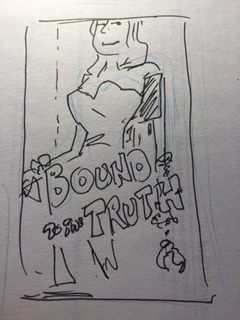 A lot of my reasoning for choosing #4 I can't totally explain without spoilers, but I will say that my cover designer and I both loved that one best, and to sweeten the pot, the figure on that cover was a dead ringer for my vic, from her hair to the more conservative style of dress than you see in #5. The duct tape across the mouth is flippin' perfect. I mean, gah. I fell for that hard, and I love how the three covers harmonize with each other across the series instead of looking like perfect matches, which to my eye always seems a bit boring, as if I'm going to read several variations of the same story. This does it for me, and I hope readers feel the same way: 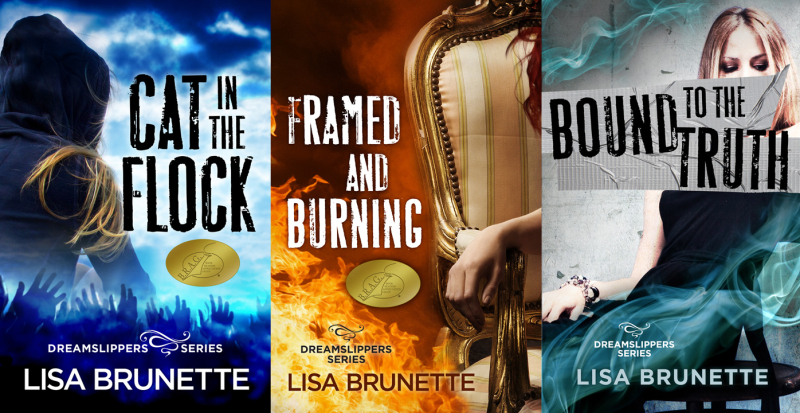 Thanks again for playing along. Now pre-order the book and tell everyone you know to do the same! The Dreamslippers will love you for it, and me? I might not go hungry.

Posted by Lisa Brunette on 08/31/2016 in Bound to the Truth, Cat in the Flock, Dreamslippers Series, Framed and Burning, Sex/Romance, Yogi Detective Series | Permalink | 0 comments