The Goodness of Gathering 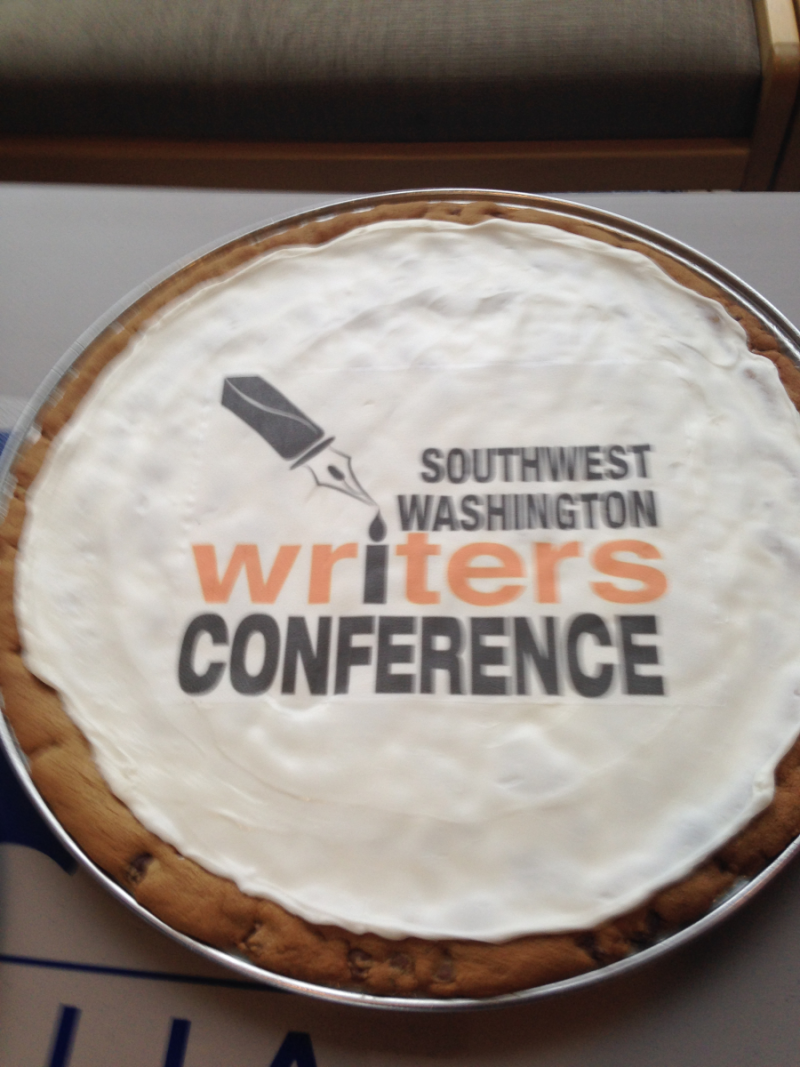 It's tempting, when you're freelancing or otherwise working from a home office, to become a hermit. You're finally free of the crowded bus; you no longer have to endure the cutthroat competition for the microwave at lunchtime. Even pants are optional.

But after you've soaked up scrumptious solitude for a good while, you start to crave communication. Someone to bounce ideas off of. Alternative answers to the questions you ponder silently every day.

That's where writing conferences come in. As a writer, editor, and teacher with 25 years' experience, I've attended many conferences over my career, and I always learn something new at each one. At this year's Southwest Washington Writers Conference, there was plenty to absorb, from the art of cover design to the craft of villainy. 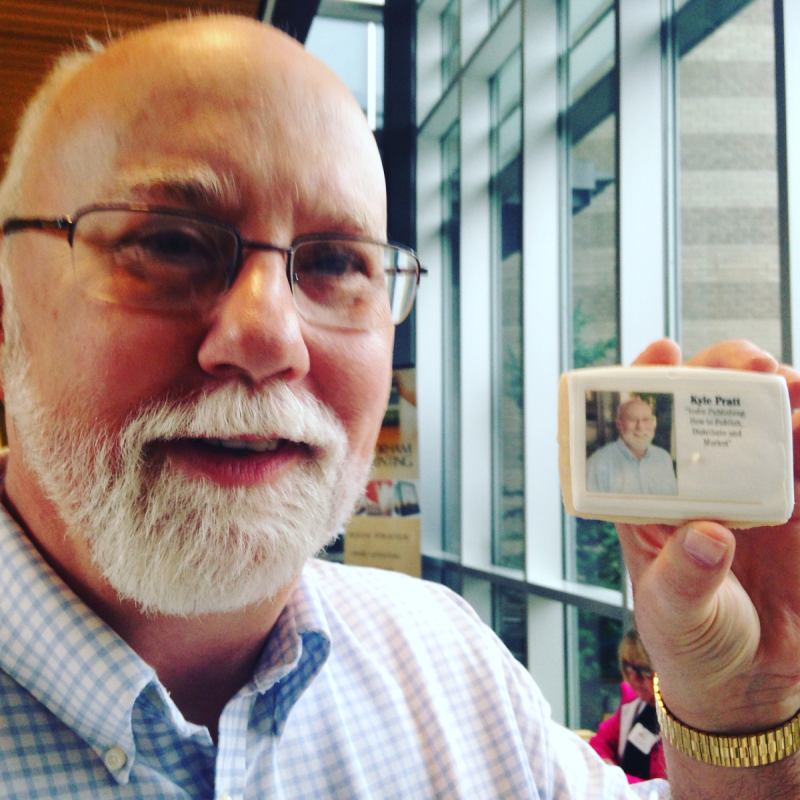 Author Kyle Pratt, who presented at the conference, with his mug on a cookie.

Having recently completed a cover vote-a-thon, I found Gorham Printing rep Kathy Campbell's presentation on cover design very interesting. I hadn't realized that male readers prefer blue covers or that Millennials have a thing for vintage photos from the 60s and 70s. (Hmm... wonder what that's all about... ).

Memoirist Jennifer Lauck's presentation served for me as the perfect follow-up to Annie Dillard's The Writing Life, which I'd re-read right before the conference. Both Lauck and Dillard present a vision of the writing life that requires strong commitment, a dedication to the work, and an active reading practice. I loved Lauck's advice to read a book looking specifically for a particular aspect of structure, such as where and how to turn a scene or develop a character. 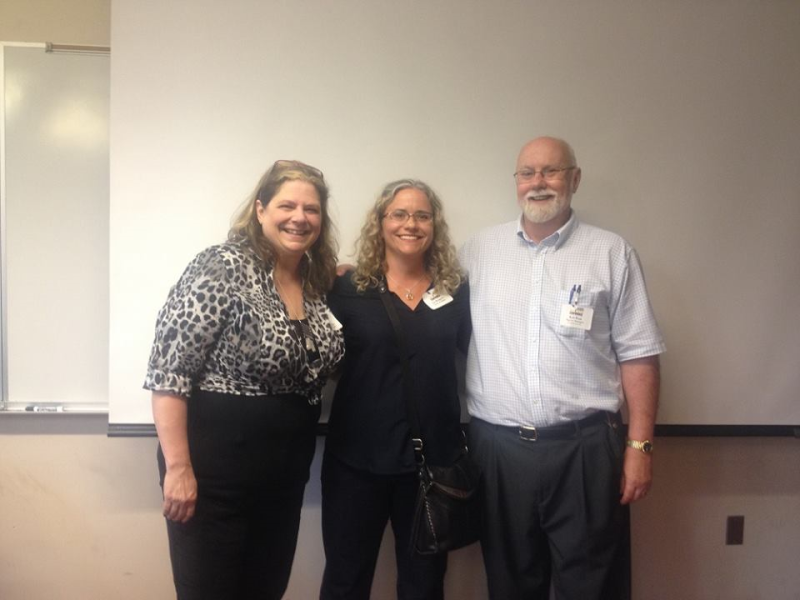 Author Carolyn McCray, me, and Kyle.

I felt more in the mood for craft discussions over business talk, but when I read Carolyn McCray's bio, I realized I couldn't miss her showdown with Kyle Pratt over whether or not to publish exclusively with Amazon. The two presented equally compelling models for how to make it as an indie writer. They've both achieved great success but with radically different approaches.

Which brings me to this: There are so many different ways to be a writer. Sure, you can get advice and take a lot of rules to heart, but the writing life is as wide open as the sky. For example, there's writer Terri Read, who's published more than 40 books with Harlequin since 1993. She thinks of writing in terms of layers of cake, and her process is very structured, to the point of adhering to a set formula. Another conference presenter, Jill Williamson, takes a less structured approach with her self-described "weird books." She devoted her whole talk to villains, pointing out cliches and arguing that "the best villains are the ones readers actually like." 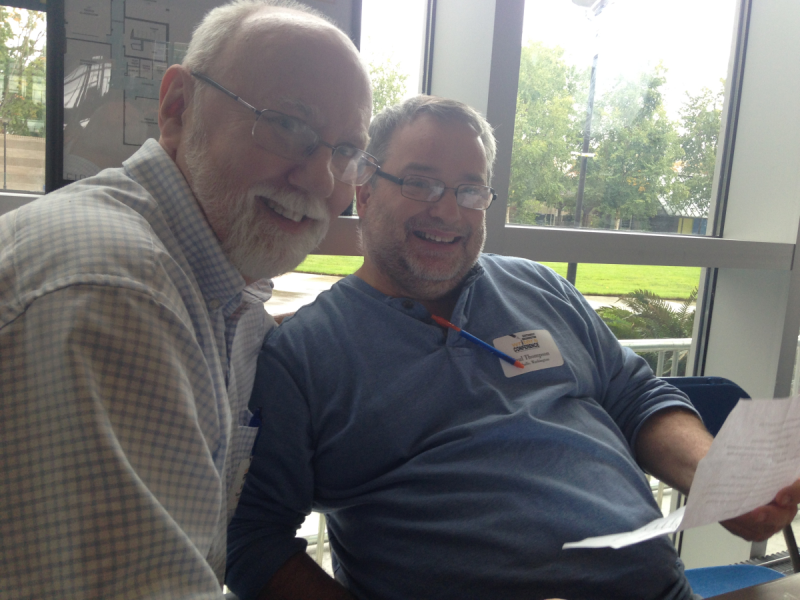 Speaking of villains, get a load of these two. Just kidding - Kyle* and Pat are my fellow members of the Lewis County Writers Guild.

The most rewarding aspect of attending conferences is the opportunity to meet other writers. While there are always plenty of published and veteran authors in attendance, most of the people I meet are noobs just dipping a toe into the writing waters for the first time. So if you're holding back because you don't think you're experienced enough, let go of that right now. I hope to see you at the next one.

*I realize from the pics here it looks like I'm stalking Kyle Pratt. But I'm not. At least I don't think so. I think it's just that we're both becoming less camera-shy. ;) 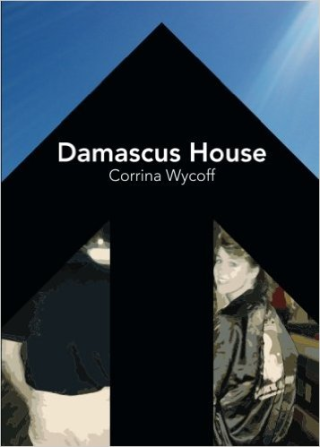 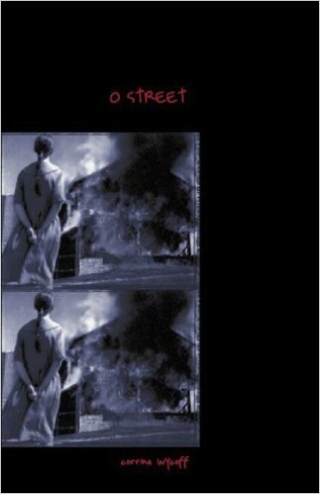 Welcome to the inauguration of "What's the Motive?" In this regular blog series, guest authors discuss the motive behind their latest books. Maybe that’s the motive for murder in the traditional mystery sense, but writers will share some aspect of motive in their novels without spoiling the plot. For example, rather than focusing on the killer, what is the protagonist’s motive? This could also be the author’s motive for writing the book. Why this book? Why now? Contributors are free to explore “motive” in all of its connotations.

Here Corrina Wycoff shares the motive behind all of her main characters, the "unattainable desire to outrun public failure." In this age of daily public online communications, it's one I'm sure many readers feel keenly.

In 1980, at nine years old, I auditioned for Annie. I lived on the East Coast, and going to a cattle call Broadway audition was practically as common a rite of passage as a first kiss. I wasn’t a particularly good singer, but I was a creditably good mimic. My Andrea McArdle impression was decent enough to get me a lot further in the audition process than it should have, far enough that every kid in my neighborhood knew about it, far enough that when I didn’t get cast after two call-backs, my failure became an ongoing subject of playground gossip and cafeteria scorn. Years later, after personal devastations much worse than the Annie experience, I still occasionally thought about this ruined chance, about the happier roads that might have arisen from earlier roads, if only.

I’ve never written about my unsuccessful childhood stab at professional theatre, but the important part of the story can’t be found in its literal details—the suffocating crowd of young girls waiting outside the Alvin Theatre on 52nd Street, admitted inside by the dozen to stand on the black, dusty stage and to sing a few bars of “Tomorrow”; the choreography I was shown twice and then expected, to my horrified astonishment, to repeat; the polished, young performers waiting backstage with me, wearing brand new, hot pink OshKosh B’Gosh overalls and comparing their agents, their private tap dance lessons in Manhattan, and their resumes. However, those details, once fictionalized beyond recognition, have repeatedly become the scabs overlying the singular stinging wound at the psychological core of all my main characters. My characters’ primary motivation—like mine, it seems—is always the unattainable desire to outrun public failure, a hopeless quest to transfigure it into something, anything, less painful.

My first book, O Street, describes a character’s twenty-year attempt to escape the humiliating aftermath of having been, in childhood, the victim of a well-publicized sexual assault. My newly published second book, Damascus House, follows six characters, members of a fundamentalist Christian church, each trying, in different ways, to restore dignity after suffering a small, public scandal. Currently, I’m working on a third manuscript, still untitled, that revolves around a woman who, with decreasing success, tries to rationalize her failings as they become increasingly apparent to everyone who knows her. Although we live, now, in a post post-Freudian world, the idea of a surveillant superego still captivates me as a source of narrative tension, as do the (very human) methods by which characters try to avoid the judgment and contempt of that surveillant Other.

Playwright Harold Hayes explained, “The essence of drama is that man cannot walk away from the consequences of his own deeds.” I repeat this advice to my creative writing students, to remind them to establish necessary elements of character motivation, tension, and conflict in their fiction. When I’m writing, I repeat this advice to myself, too, with the caveat that people also cannot walk away from the aftermath of their own humiliations, no matter how assiduously they try. 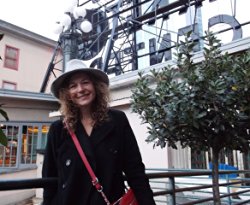 Corrina Wycoff’s fiction and essays have appeared in journals, magazines, and anthologies. She is the author of two books of fiction, a linked story collection, O Street (2008, OV Books) and a recently released novel, Damascus House (Spuyten Duyvil Press). A single-mom-turned-empty-nester, she lives in Washington State, where she teaches English and Writing at Pierce College.