I'm Taking Today Off - Here Are Pics from the Stepson's Graduation
Cool Announcement Coming Soon... For Now, Lessons from the Garden

How to Embrace Your Dark Side Without Getting Lost 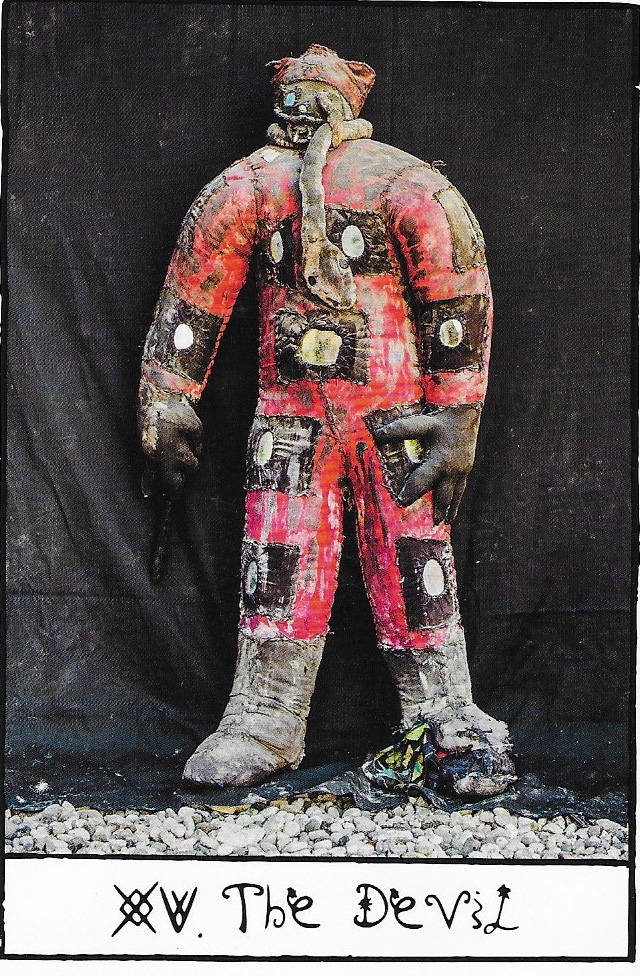 From the Ghetto Tarot by Alice Smeets.

I begin most days by drawing a tarot card. It's part of my spiritual practice to think about the current challenge or lesson and draw a card that, when it's all working well, gives me insight. One day last week, I drew The Devil.

This can be an alarming card to have pop up in a reading, thanks to the bad rap the hooved one gets in Christian-influenced culture. I'm many decades away from the colorful images of El Diablo that illustrated my Catholic children's bible, and it still gives me pause. These days, I see the world less in terms of good vs. evil and as more of a continuum. But The Devil in a one-card reading is cause to sit up and pay attention nonetheless.

The deck I currently use is the Ghetto Tarot, created by talented photographer Alice Smeets, who based it on the 1909 work of another artist, Pamela Colman-Smith. There's a lot to love about Ghetto Tarot. First, it's a photographic representation of each card in the traditional deck, of which most people are familiar, and set entirely in the Haitian ghetto. The images are stunning and powerful, showing how the themes in the traditional deck resonate well in a culture outside that tradition. Second, this deck uniquely embraces the darker side of the tarot. Smeets offers her argument:

We tend to concentrate on the light aspects of the seemingly more positive cards and are afraid of the apparently negative cards such as Death, the Devil, and the Tower ... That's because we are conditioned by our society, our parents, and our teachers to categorize the negative as bad, instead of helpful. Many of us fear pain instead of welcoming it. But every negative situation is an opportunity to grow and learn, while every positive situation has the potential to spin out of control.

The deck plays on "shadow" as well as "light," with each card in the deck possessing both sides. The Devil's shadow side can be "acting against your convictions." The "light" is "finding and accepting your dark side."

Drawing The Devil would have been reason enough for me to mull over the idea of finding and accepting my dark side, but sometimes the Divine hits you over the head with things that seem to have extra importance.

The same day I drew The Devil, I went to the library to pick up a book I'd requested through interlibrary loan. I had learned of the book from a review and either hadn't seen or didn't remember the cover, which is this: 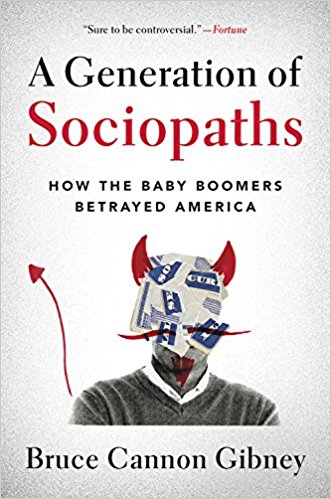 Yeah, I know. Pretty interesting coincidence. The book is a provocative read, all right, challenging everything I've believed about my parents' generation. Maybe that was the lesson of the day: To go there, to push my thinking into a dark place again. The book sort of chose me, along with a few others on class in society--after this in my stack are White Trash and Poor But Proud. It's all research for an in-progress novel based on a real-life murder.

My previous work is a lot of light: the Dreamslippers Series. Back in 2012 when I began to write those stories, I started to take my first book in a darker direction, and the result is that I relapsed into PTSD nightmares, which I'd been free of for some time. So I backed away from that and wrote a cozy-ish series about a 70-something yogi named Amazing Grace instead.

I'd been content to relegate it to the edges. But this Devil showing up in my life with such force made me wonder. A recent bout of writer's block specific to the aforementioned novel-in-progress came to mind. Maybe the block had to do with suppressing the dark side? Not wanting to go where I sense this story will make me go? And if I had any doubt, scanning through my email the same day of the two devil-related incidents above dispelled it, as one subject line in particular jumped out at me:

Writer, give in to your dark side

The email came from one of my favorite follows, Colleen M. Story's Writing and Wellness Blog. And lo and behold, the entire newsletter was devoted to this "dark side" issue, and specifically for writers. The articles? Here you go:

The email was illustrated with another devil: 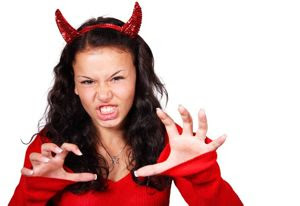 At this point, I'm like, OK, OK! Dark side! Got it! Thanks, Spirit! Paying attention now, I promise!

Didn't I already know this?

Over the winter, my stepson turned us onto a movie he loved called Inside Out. It's a Pixar animated film, brilliantly done, and the gist of it is that [spoiler alert] the character you think is the hero, the one who's relentlessly positive, actually turns out to be the villain. At least of a kind. The movie does a remarkable job of illustrating how terrifically bad it is to suppress feelings because they're "negative." The filmmakers consulted psychologists in making the film. I highly recommend it for anyone who's convinced--or is tired of those who are convinced--that positivity is the only way to go, all the time. You're welcome.

There's a real benefit to healthy expressions of negativity. If someone's wronged or harmed you, swallowing your anger or outrage could actually make you feel complicit in their act, an enabler to your own victimization. Denial, sugar-coating the truth, false positivity--none of these things serve us well.

But there's a balance to it.

One of many dead manuscripts I have in a drawer is something I finished back in 2007 called Meat: A Memoir. I gave it to the agent I had at the time, and, based on the title, she had high hopes. (She described me at a party once as "very talented and very intense.") She loved the short story collection she was then shopping around to publishers. But Meat? "I couldn't get through it," she told me.

It was all darkness, with very little light.

So that's my challenge, as both a writer and a human being.  To integrate my shadow and light sides, to allow them to coexist without judgment, suppression, or imbalance.

But how do you do that? Here are five ways I strike the balance:

What it comes down to is your shadow side and your dark side actually need each other.

Thanks to Alice Smeets for her lovely Ghetto Tarot and Colleen M. Story for her insightful essays. I hope you'll check out their work.