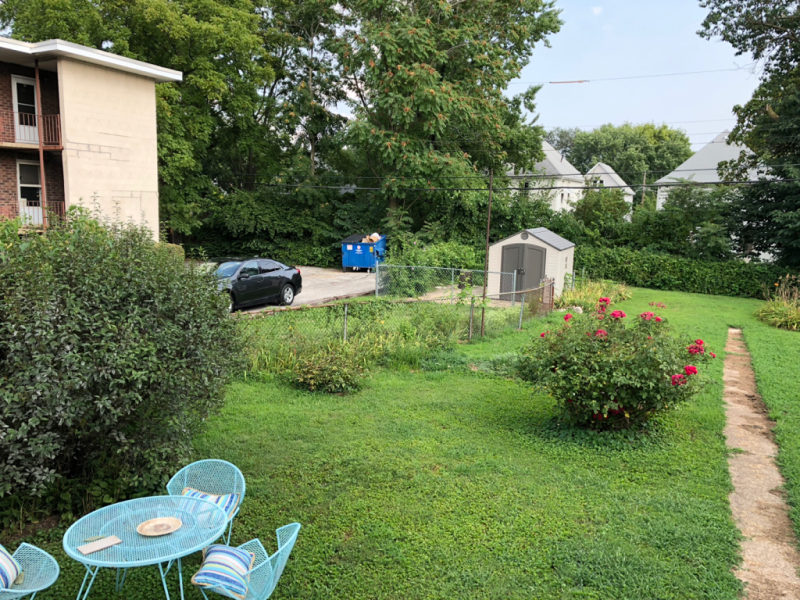 When Anthony and I bought our St. Louis home last fall, we were well aware of its flaws. After all, those flaws gave us a below-market price for a near-pristine World's Fair-era home with loads of period charm. It's the kind of house that makes you swoon and want to break into song like Judy Garland in "Meet Me in St. Louis." For my West Coast friends, let me list some of these drool-worthy details of which you might not be familiar, since I know you have less exposure to homes built during the turn of the last century: tall ceilings and oversized windows, character mouldings, original wainscoting, copper (!) doorknobs, transoms on both outside and inside doorways, original hardwood floors, a carved bannister, and finally, a dramatic fireplace graced by a wooden shield adornment. Yeah, that's right. A shield.

The house is also in a very walkable neighborhood full of funky shops and restaurants and more yoga studios per capita than any neighborhood I encountered in the Pacific Northwest (so take that). Side note, gamers: we can walk to not one but two places to buy comic books and games--plus there's a pinball bar. I like the 'hood better than Seattle's Ballard neighborhood, where I lived for a decade, and I was a super-loyal Ballardite who thought I'd never leave. Maplewood has all the good parts of Ballard, in my opinion, and none of the bad, as it's still working class, affordable, and somehow retaining its original Route 66 vibe even though we've got an entire shop devoted to bespoke knives and a restaurant that serves "shaved kale salad."

So those are the USPs, or unique selling points, for ye who aren't addicted to HGTV. But back to the flaws. I'm sure when you weren't distracted by the 60s vintage table set (I've had that beauty for 20 years) and lovingly rehabilitated rose bush in the photo above, you undoubtedly noticed the apartment building.

Hmm... yeah, the apartment building. It's a doozy of a flaw, for sure. Here's another shot so you can get the full effect. 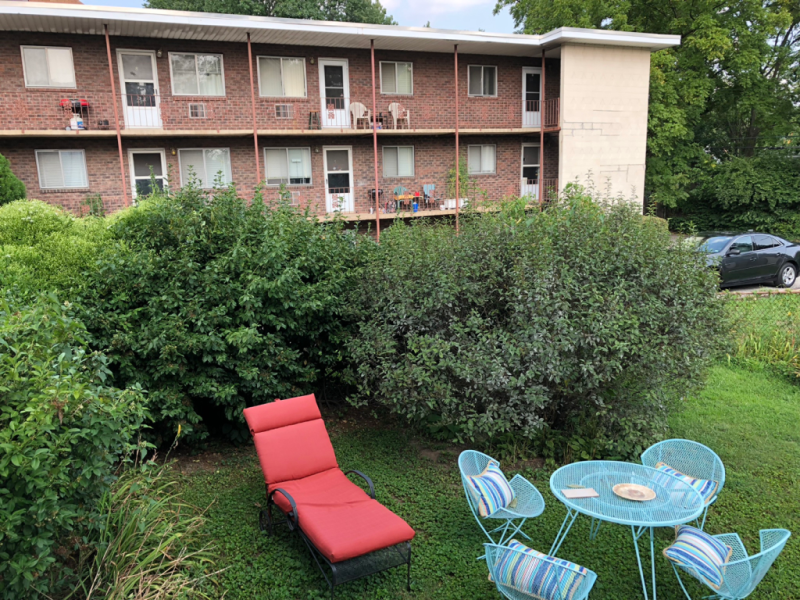 Yep, that's a double-decker balcony staring right down into our yard.

A lot of people would run screaming from this, and a lot did. The house had sat on the market for nine months before we bought it.

But Anthony and I fell in love with it... and we smelled an opportunity. The lot is 1/4th of an acre, walking distance to the St. Louis city limit. Within a 10-minute drive is the world-famous St. Louis Zoo, Art Museum, and Science Center, all flanking Forest Park, which is not only hands-down the loveliest city park I've ever seen, it's larger than New York's Central Park, a fact that seems to shock even St. Louisans. The only thing that would make the home's location better would be a view of the Arch, which you can get a short walk away.

Anthony loved the property's quiet, farm-like feel. A quarter acre is a lot of land to play with, the biggest plot either of us has had across the span of adult lives spent in ten different cities, six different houses, and more apartments than we can count. Besides, we'd outgrown our last garden, a tiny in-town plot in Chehalis, Wash., in pretty short order, filling it within two years and wishing we had more room.

We discussed the matter and decided that the house's main flaw (and its smaller ones, too) could be fixed, with a little hard work and patience. And that brings me to the big reveal.

This summer, we initiated STEP ONE of our master plan, which was to remove the eyesore chainlink fence zigzagging across the left side of the yard and replace it with a 6-foot tall wooden one. We actually wanted an 8-footer, but the city of Maplewood would only permit to a max height of 6 feet. So much for property rights. Here you can see an orange broom my husband is holding up, showing where the 8-foot fence would have reached. Ah, well. 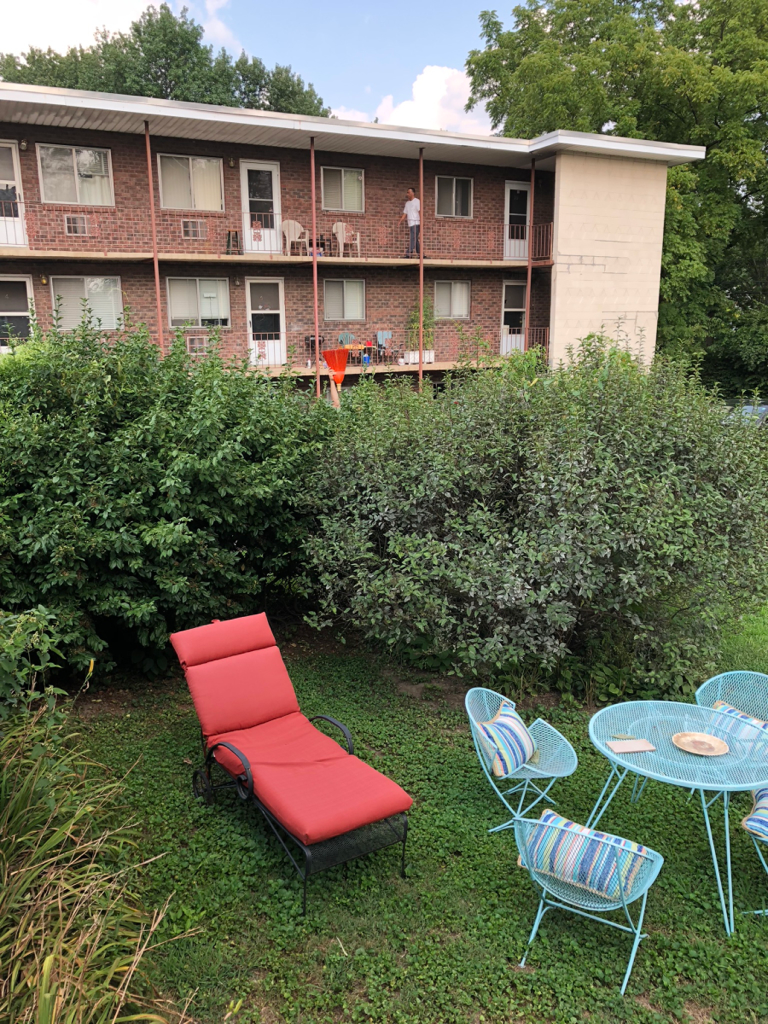 Once the powers-that-be nixed the 8-foot option, we knew we wouldn't get the first-tier-balcony coverage we wanted, but the fence was necessary anyway to block off the wall of cars that is the apartment building parking lot, which butts right up against our property line. Not to mention an eyesore of a Dumpster that was all-too-visible from the house. And yeah, the zigzagging... which was weird and bad feng shui for sure and probably a holdover from when there was a garage at the back of the house, as the fence once skirted a gravel drive that is now buried under a layer of turf. Good times.

I hate chainlink fence. Just hate it. We were worried we'd have to remove it ourselves, but the fence company we hired removed it for us--along with a metric ton of vegetation that had to go as well. 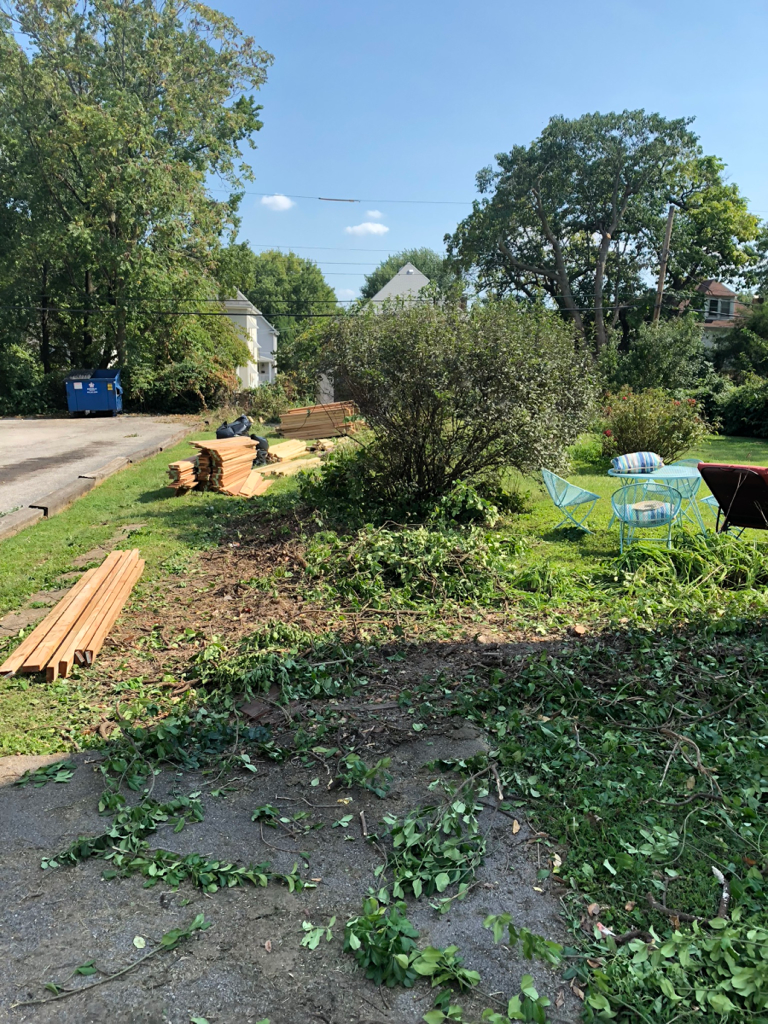 We got bids from 3 different companies, and Just Wooden Fences was the best fit for us. I can't say enough good things about this company. The owner, Walt Thorngren, came over to measure for the bid himself, was very helpful in going over the options, and even provided us with a list of recommended contractors and providers for other home improvement services. Walt was super-responsive throughout the process, and his crew worked quickly and efficiently, to a high level of quality. 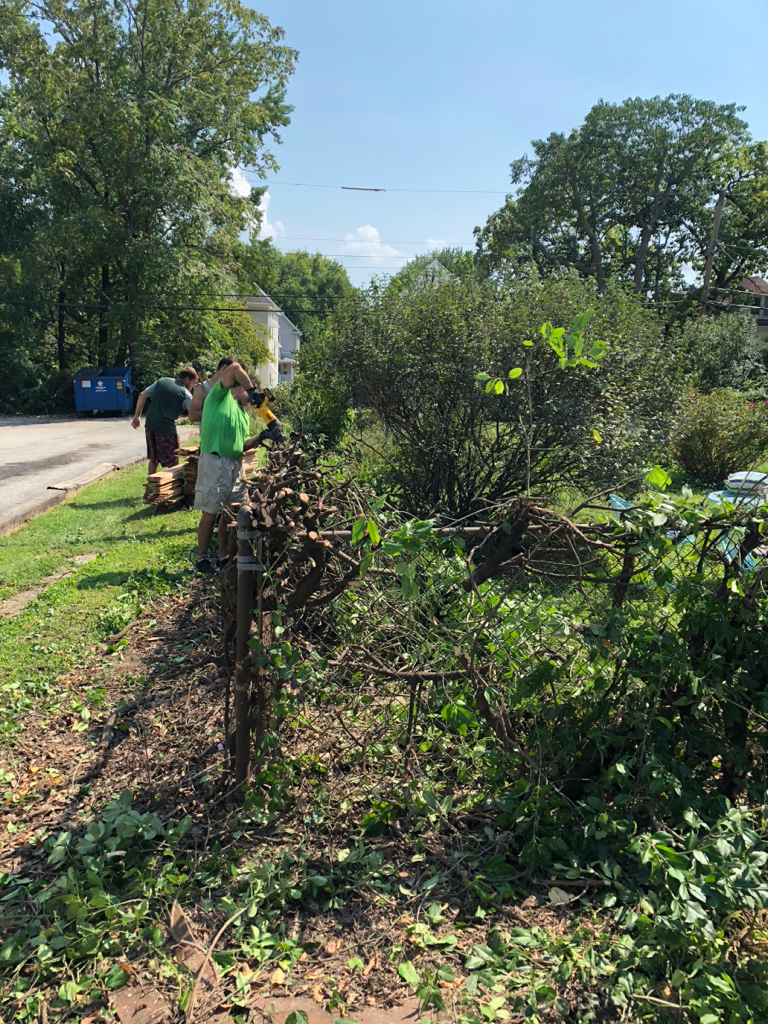 A tough job, but the crew pressed on.

We were particularly impressed that the Just Wooden Fences crew tackled a tricky situation: A very mature plant meant to be a ground cover that had grown around and through the chainlink. At first I felt guilty because removing the chainlink would definitely mean removing the plant, but during our visit from the St. Louis Audubon Society, we found out that the plant was none other than wintercreeper--also known as Euonymous fortunei--which is considered an invasive "thug" here in Missouri. They recommended eradicating it, so we did. 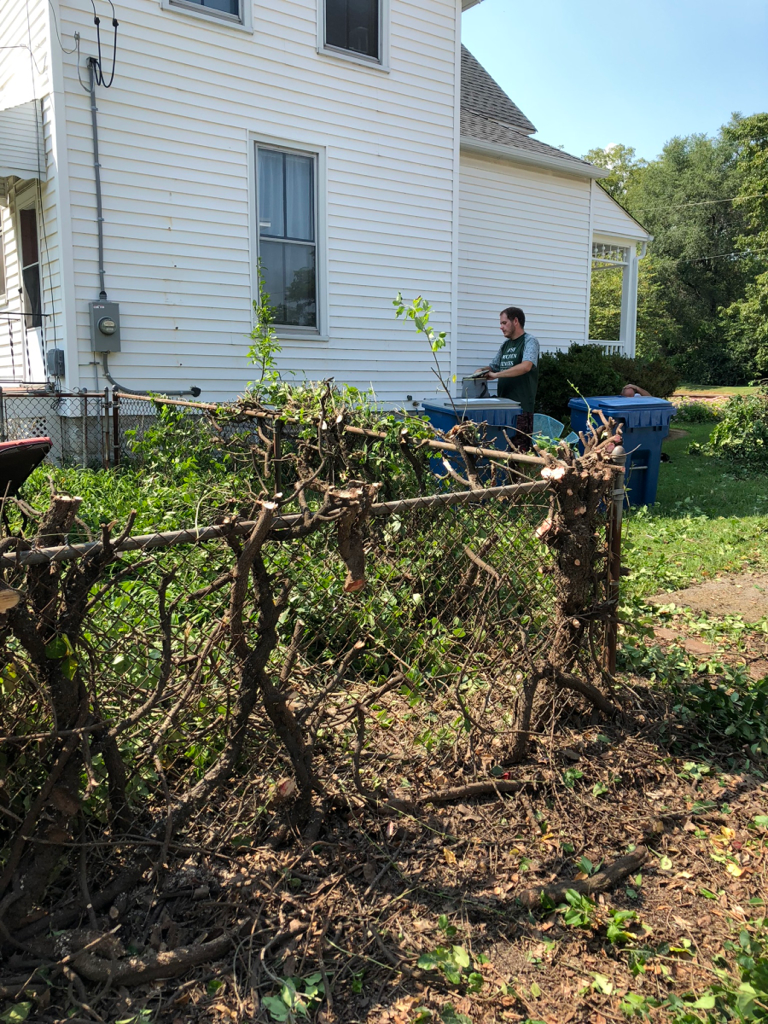 Later, we treated the exposed stumps with an herbicide, which normally, I'm opposed to, but this plant unfairly competes with and displaces native plants and is particularly noxious in the way it spreads. After doing a lot of research, we made the tough call to treat the stumps. There's wintercreeper EVERYWHERE, so I'm sure we haven't seen the last of this little villain.

On to happier topics... I don't know if you've ever had a fence installed, but this is my first one. So you can imagine the emotion I felt when that pile of lumber the crew brought started to look like, you know, a fence! 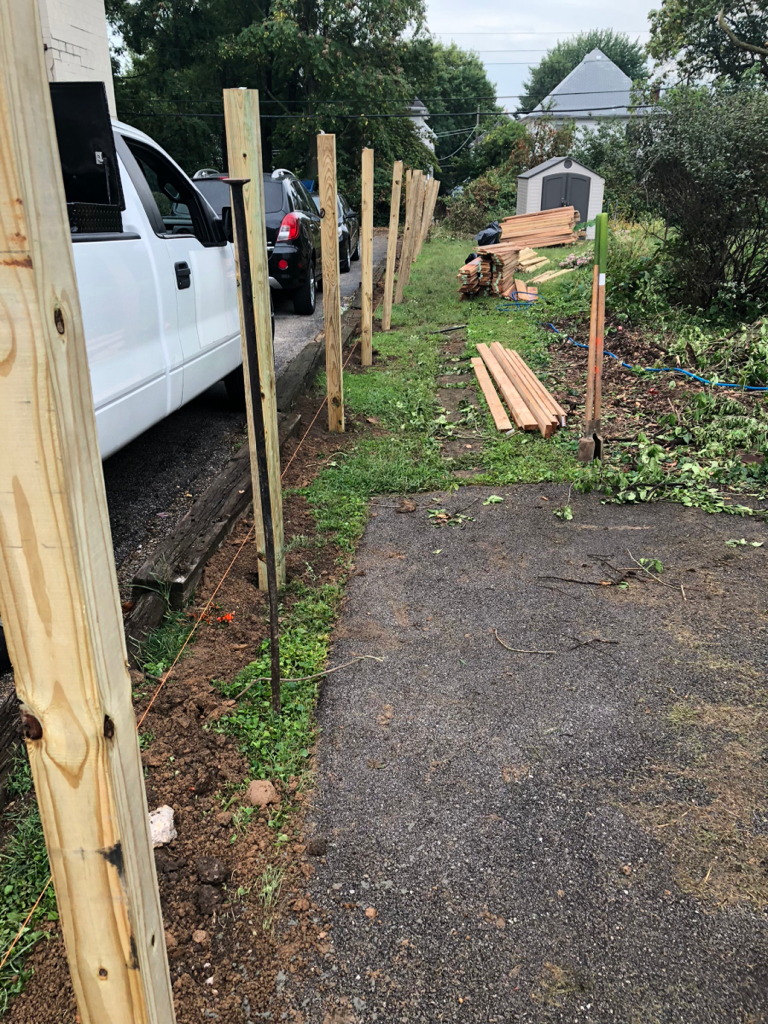 When the posts went up, so did my excitement!

If I'd known getting a new fence was this easy, I'd have been getting new fences all my life. Of course, what made it easy for us is that we hired a company to do the work, one that specializes in fences--JUST wooden fences! My brother installed his own fence, with my other brother's help, but they are mechanics and guy-guys who are good at that stuff. (And younger. I'm the oldest of four.) Anthony and I knew ourselves well enough to know that actually building a fence was outside our limits. As recently as this past spring, we both hurt our backs, like a couple of typically middle-aged people with desk jobs. 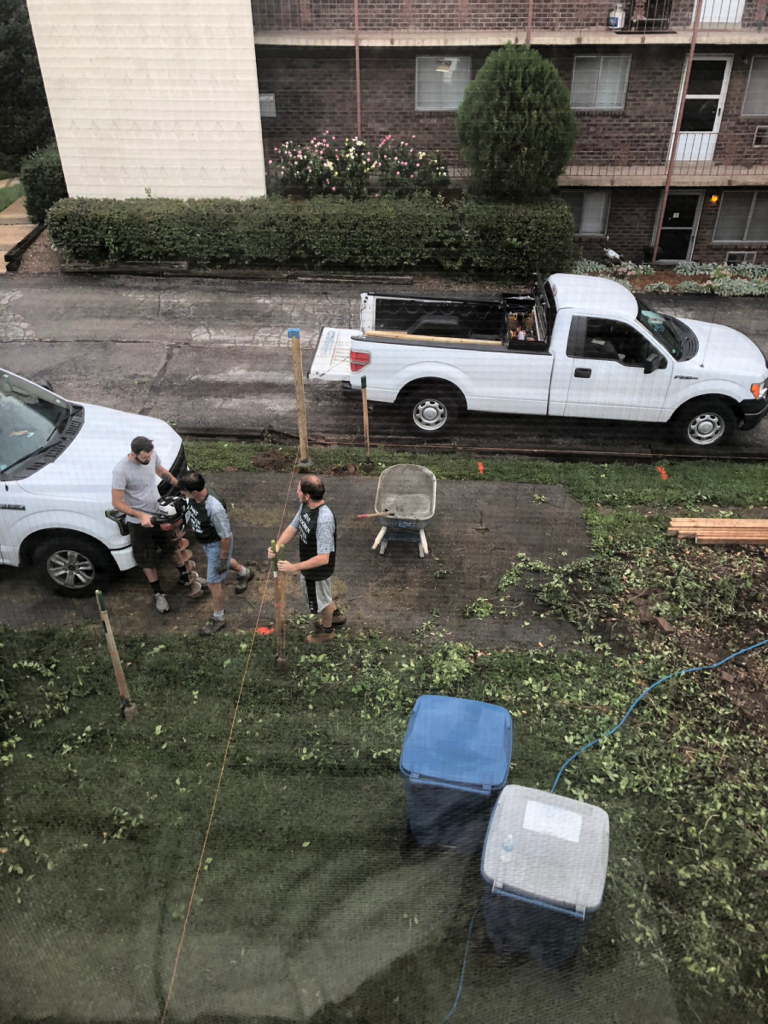 Aerial view of the awesome crew.

The fence installation only took two days: one to remove the old fence, and another to put up the new. Just Wooden Fences cleared out the chainlink entirely, gave us a referral for someone to haul away the vegetation debris, and left us with a gorgeous, brand-new fence. 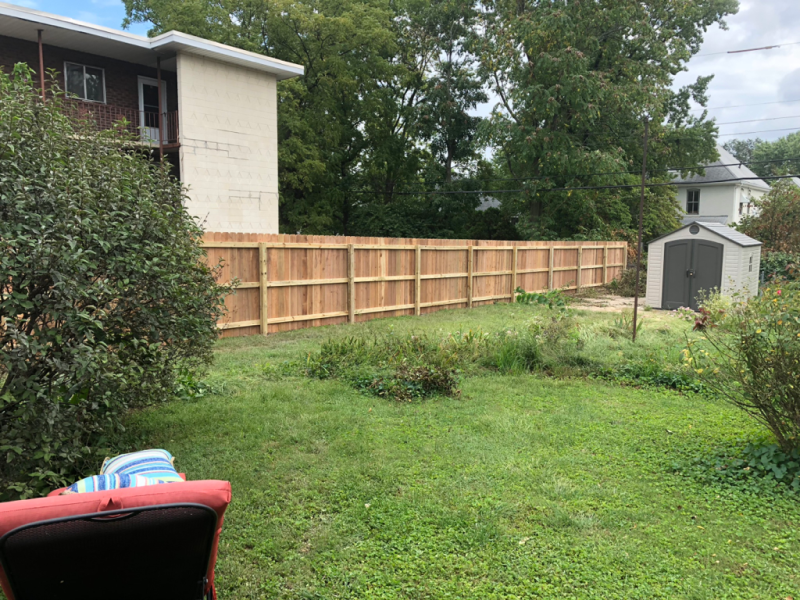 I've never loved something so utilitarian like this before.

OK, so we opted to get the raw cedar, which is stunning, as you can see. But in a couple years' time, that will turn drab grey, so we needed to stain/seal it ourselves, to preserve both the color and the integrity and lifespan of the fence. That was a harder job than we'd thought, mainly because it required using an oil-based stain (yes, we realize there are latex options, but all the research says it won't last). The fumes were as noxious as that durn wintercreeper, and since I can barely stand perfume, let alone oily paint fumes, it was more than I could take. Next time, we hire someone with spray equipment to get the job done lickety-split. 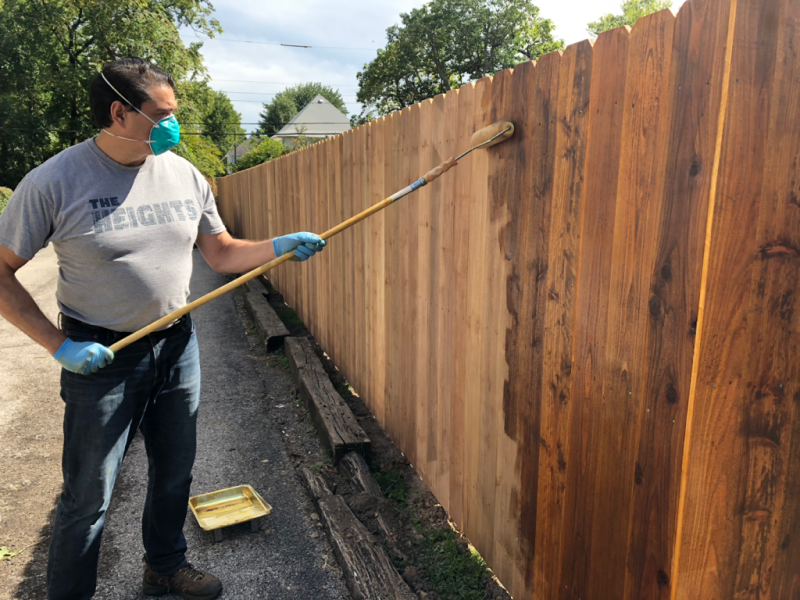 My husband, the hunky fence guy. Between the construction-worker vibe and the doctor's gloves, this might be more fantasy than I can handle.

Here's the view from the dining room before and after...

Now you see the Dumpster... 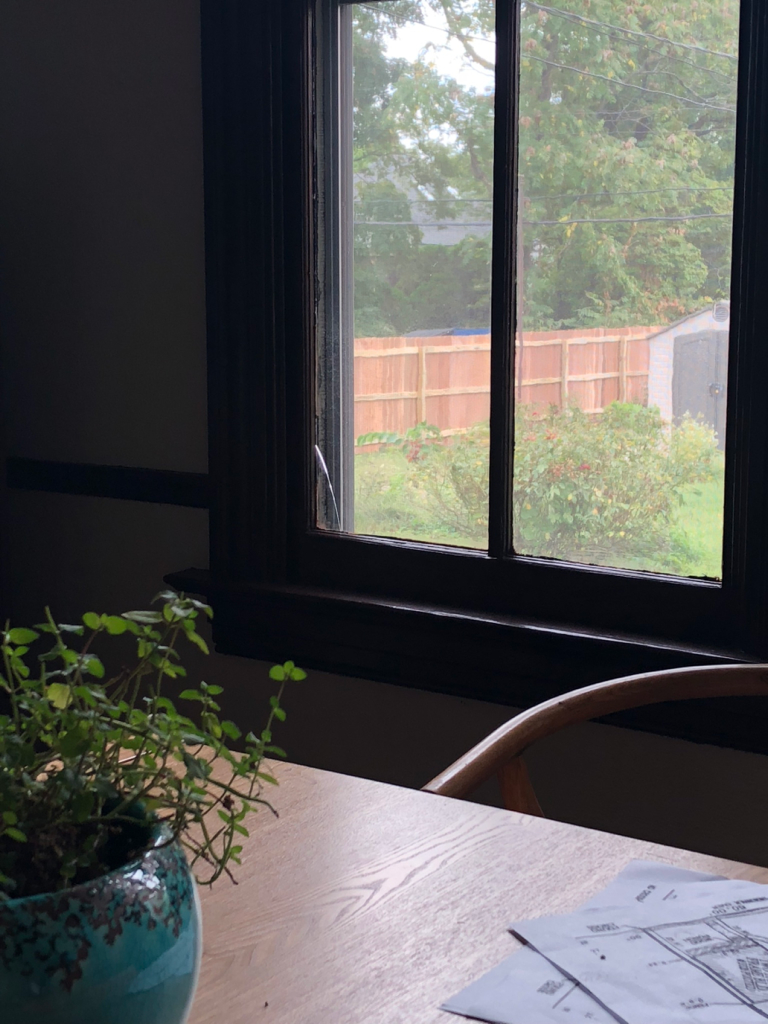 What a difference a fence makes, people. If you don't have a fence, I highly recommend getting one. If you're in the St. Louis area, seriously, just call Walt at Just Wooden Fences. 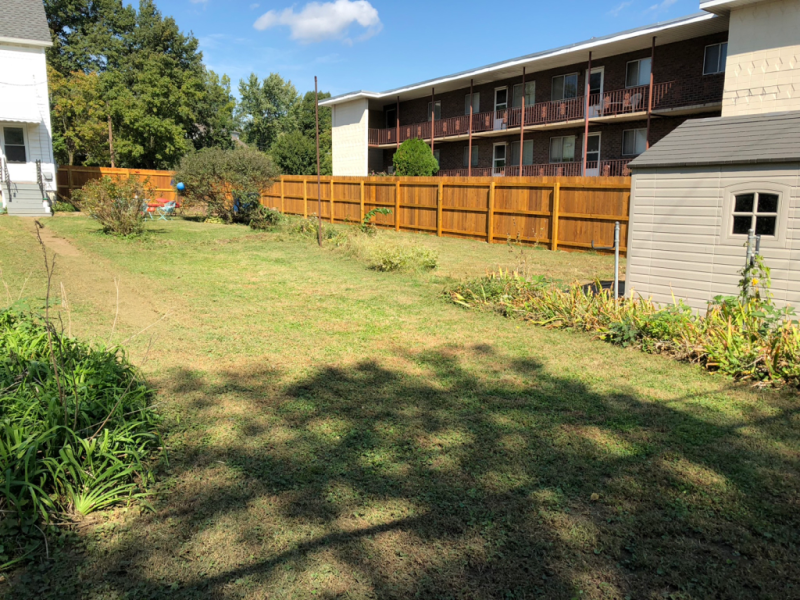 I know, I know... you're like, wait! What about the balconies! They can still look down on you! But don't worry. We have a fix in store... stay tuned.

What do you think of the project so far? Any tips, from those of you who've been down this road? What sayest thou? Don't you want to come over now and plant some carrots????

Note: We received a discount on our fence in exchange for the write-ups on this blog. We wholeheartedly recommend Just Wooden Fences as a quality business.