Big Blog Changes That Affect Our Readers!
Should You Practice a Set Yoga Sequence, or Free-Form?

After 25 Years of Practice, I Sign Up for My First Yoga Teacher Training 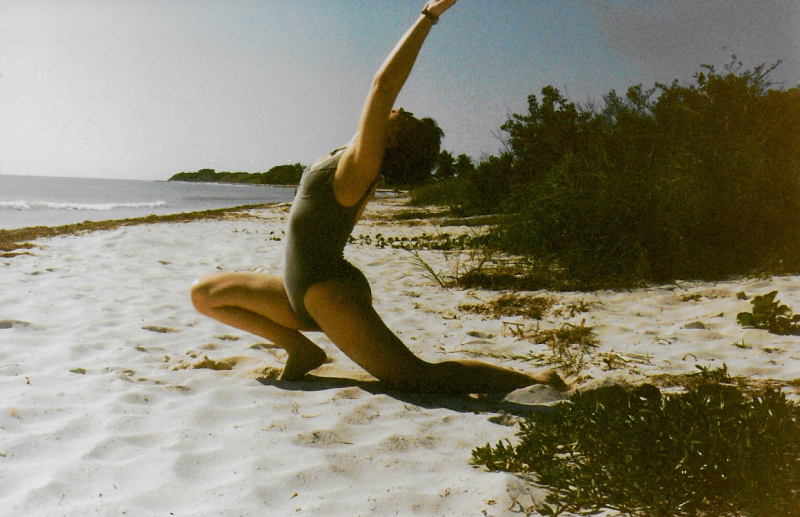 Here I am in Crescent Moon pose, one year into my practice. All photos taken in 1995.

My yoga practice began 25 years ago - with a yoga video tape I played on a VCR at home.

Imagine what St. Louis, Missouri, was like in 1994. There were no yoga studios to speak of back then. The only yoga I had ever encountered was on PBS, in the form of a super-slender woman in leotard, with a long braid running down her back, who led you through a series of bendy, twisting poses. She was like the Bob Ross of the yoga world. Yoga was something that people who followed gurus did.

But then I read a glowing review - printed in the back of a women's magazine - of a yoga video. I'm not sure what it was that convinced me, maybe the white sand dune setting in the marketing image, or the fact that the yoga guide in the video was actor Ali MacGraw. But I went right out and bought it, back when you could go to an actual store, look for a video on a shelf, buy it, take it home, and pop it into the black box under your TV.

Note: This post is neither sponsored nor the product of an affiliate relationship, and we receive nothing in exchange for mentioning this DVD.

It's a beautifully done video, now a classic in the yoga world. The setting is gorgeous, and the soundtrack - by the band Dead Can Dance - became the rhythm of my breath and movement, weaving itself into my muscle fiber and psyche. While Ali MacGraw acts as your guide, Master Yogi Erich Schiffmann is the teacher here, and his calm, meditative voice is still with me at times when I practice:

Ujjayi breathing is the most important single element of our practice.

If you start to sway, don't give up. Trees sway, get more grounded.

As first yoga teachers go, you can't get much better than Erich Schiffmann, and although I've never met him in person, he narrates so well in Yoga Mind and Body that I feel like I've taken his class, in real life.

The video holds up really well after all this time, with its cast of yogis - diverse both in terms of age and ethnicity - and the distilled elements of what is yoga at its heart. MacGraw's opening profession of wanting something more than a workout, something to "still the chatter" in her mind, captures what makes yoga so transformative. It was for me then and continues to be.

My yoga practice has changed and evolved as I have over the years since that initial connection. By 2002, I had migrated out to the West Coast, where you can't throw a rock down the street without hitting a yogi. (Not that you should throw rocks at yogis!) My first in-studio yoga experience was Bikram's now-infamous hot yoga - the same 26 poses done each time in a room heated to 104 degrees. Bikram is a powerful, disciplined practice, and I recommend every yogi try it at least once in their lives. My teacher was a gentleman I knew only as Scott, who taught nearly every class I took, sometimes seven days a week, at Bikram Yoga Tacoma. The studio closed a while back, but the lessons Scott imparted are still with me. He taught me to focus on my own mat and ignore what's happening on my neighbor's, and he taught me to take Child's Pose when needed, but not for too long.

When I moved to Seattle proper, I continued to practice that style at Bikram Yoga Seattle (which has now morphed into Sealevel Hot Yoga). I'll never forget yoga teacher and owner Kevin Cooke calling out in his characteristic accent, "Ahms back, ahms back," to cue a standing backward bend. A line in a poem in my book Broom of Anger is inspired by moments in class when another teacher there told students to "look back with your eyes." 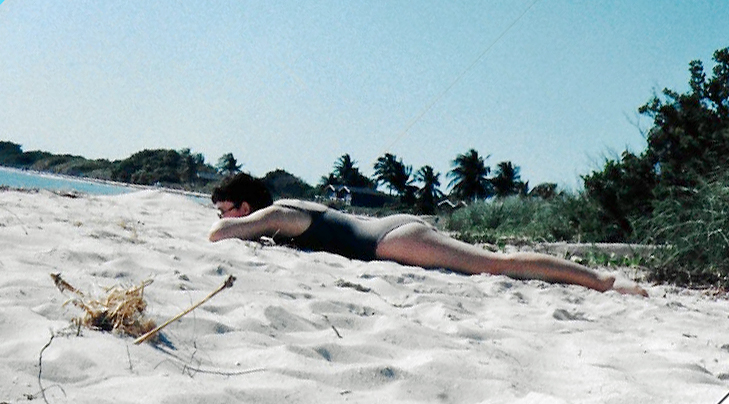 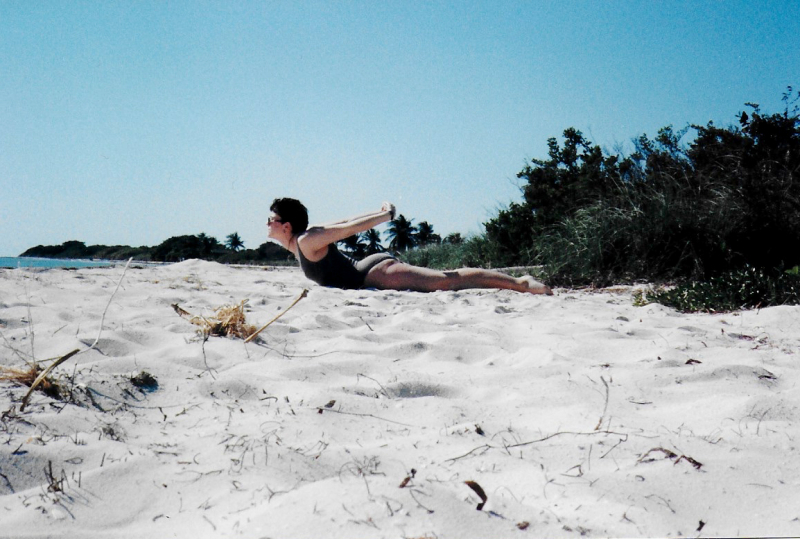 In 2005, I discovered Baptiste-style vinyasa flow, and that was it for me for the next decade.

Vinyasa style is free-flowing, like dancing on your mat, and the funky, cool studio where I practiced in Seattle often had music. Sometimes live music - more than once, we practiced with Steve Gold performing in the same room. Shakti was a lively, energetic, fun place to practice, and it was there that my practice reached its peak, at least in terms of the range of more difficult, challenging poses I could do. I was very lucky to get to practice with teachers Lisa Black (the studio's owner), Scott Simon, Eric Elven, and Jodi Boone - all very good guides.

From there, I tried acrobatic yoga, Pilates, a dance style called Nia, and even trapeze.

My husband was a brave partner for acroyoga, with my stepson joining us occasionally as well. We took classes taught by two fabulous sisters, Angela DiMario and Jill Baumgardner, both owners, for a couple of years at Kula Movement. Through acroyoga, I learned to fly, and finally I could practice inversions confidently. Kula is right in the heart of Ballard, and we would practice on market days in front of a big window of onlookers. For the first time, I didn't mind.

Trapeze is another story: It put me in touch with my intense fear of heights, and I came to quickly accept the limitation. I have a newfound respect for trapeze artists, who make something look so easy that is actually quite demanding on the body.

Pilates is great for your body, but it's very expensive and rare to find the one-on-one Reformer classes that have the biggest impact. Mat Pilates didn't quite do it, not when I can do yoga instead.

I practiced a somatic dance style called Nia for two solid years at Embody, a studio that became a sort of second home to me. Owner Christina Wolf is a fantastic teacher with true-blue leadership skills, and it was an honor to learn from her and her crew of fellow teachers, especially Rachael Prince (Nia, barre) and Greg Bowles (yoga). There I earned a white belt and a Moving to Heal certificate, which meant I could teach the dance style in both its more energetic form or its slower, more healing-focused pace. But life had other plans...

Now I find myself back in a transformed St. Louis, where there are three yoga studios within walking distance of my house, let alone in the city as a whole. And at the closest one, I've found the perfect place to take my first teacher training.

I feel really self-conscious telling people I've been practicing yoga for 25 years. Inevitably, it raises the expectation that after all these years of practice, I should be able to flip around in handstands with ease, twist my body into a pretzel shape, or even levitate. 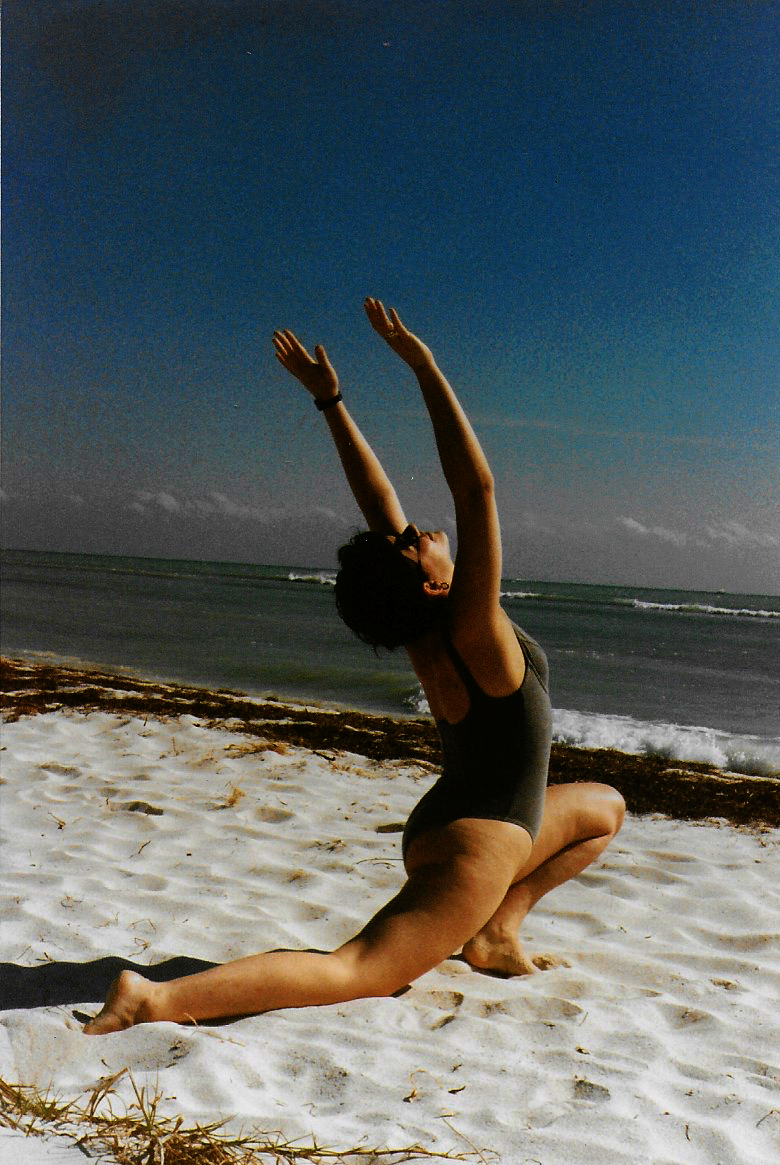 It's funny to see these pictures, taken on a pre-digital camera at a time when the Internet and email were both brand new. Loooong before Insta yoga photos.

But I can't do any of those things. I realize we're conditioned - especially by inexperienced yoga teachers - to believe that over time, any depth or achievement in a pose is possible, as if yoga can be represented as a line graph, the arrow soaring upward and to the right over time. Truth be told, my yoga trajectory looks more like a bell curve.

And that's OK. Because of a lifetime of car accidents and a 22-degree scoliosis S-curve, I have pain in my left shoulder and right hip that has signaled to me it's time to recalibrate. Here in my late 40s, my body craves a slower, more contemplate practice. Fortunately, the teacher training I've enrolled in fits with that recognition exceptionally well. You can tell by the fact that my fellow students range in age from their 20s to age 70, encompassing a wide variety of yoga expressions. Our teacher espouses the snowflake principle - no two yoga poses are ever alike.

The teacher training also includes private lessons. During my first one, the instructor expressed delight with what she could see in my practice as evidence of a long history of good training. That's part of why I decided to honor my past teachers in this post. I thank them deeply for sharing their lessons, helping to calm and center my mind and make my body stronger and healthier. They have been amazing guides, and I will endeavor to continue their examples.

Wish me luck as I begin my yoga journey anew, and tell me about your experiences in the comments below. How long have you practiced? How has your yoga changed with you?