Should You Practice a Set Yoga Sequence, or Free-Form?
Inspiration Garden: My Father’s… Grandmother’s Garden…? 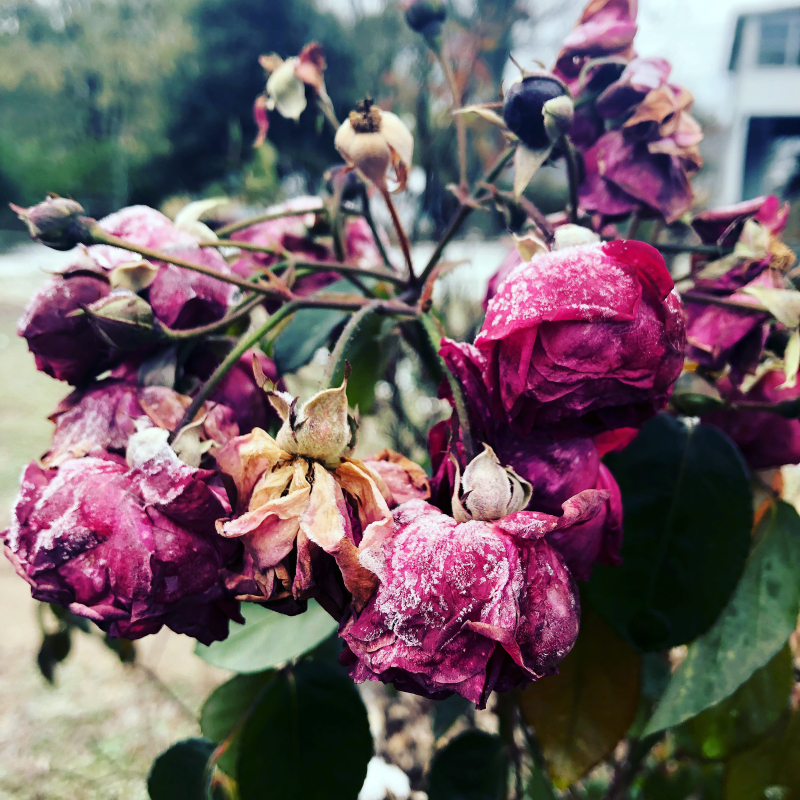 Aren't these roses lovely? They're one of the few plants in the Dragon Flower Farmyard that we were able to keep, since they aren't invasive or nuisance plants that steal resources from native plants, pollinators, and animals without giving anything in return. Not that they're GREAT or anything, from an ecological point of view. They're still ornamental and exotic. But at least they're not on the Missouri Conservation Department's list of thug plants, as were the winter creeper (now gone) and Japanese honeysuckle (also gone).

Last time here on the blog, we chronicled the tremendous effort that went into removing those invasives. They took up most of the yard's greenery and had grown into and around a legacy chainlink fence as well.

This time I'm here to share the last chapter of the fence-install story, and it's a shocker.

For financial reasons, we split the fence job, completing the side between us and the apartment building during the summer and opting to finish in November. I wasn't sure they could dig the posts in as late as the week after Thanksgiving, but our friends at Just Wooden Fences said it would be no problem.

In between, we had Horstmann Brothers Landscaping remove the honeysuckle, and what lay in wait underneath kind of horrified us.

You already saw the chainlink fence on the southeast side of the property, and it was eyesore enough, not to mention tough to remove since the winter creeper (which is supposed to be a GROUND COVER) had woven itself up through the chainlink so that the fence and the creeper had essentially become one.

We assumed the fence on the rear and northwest sides would be the same. But we were wrong. It was much, much worse. 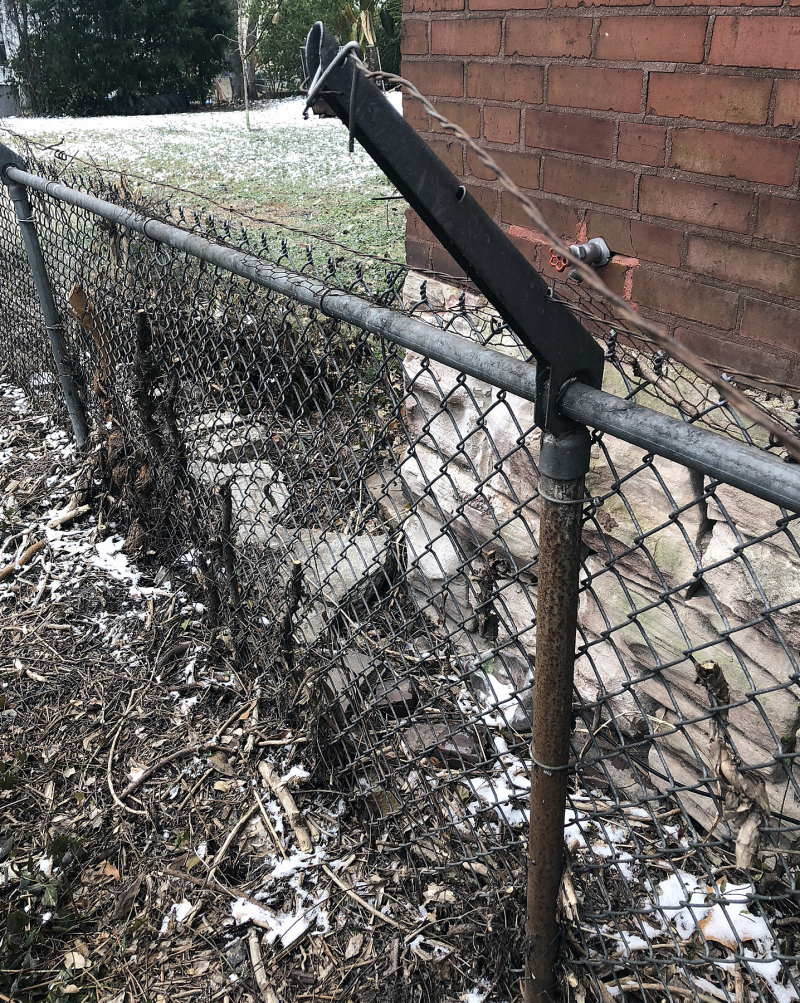 Yeah, it looked like the edge of the demilitarized zone. Images of the Gestapo came to mind.

Although the honeysuckle vine was invasive, it had served as a rather attractive green screen. Taking it out left a large swath of bare, ugly fence topped with barbed wire. 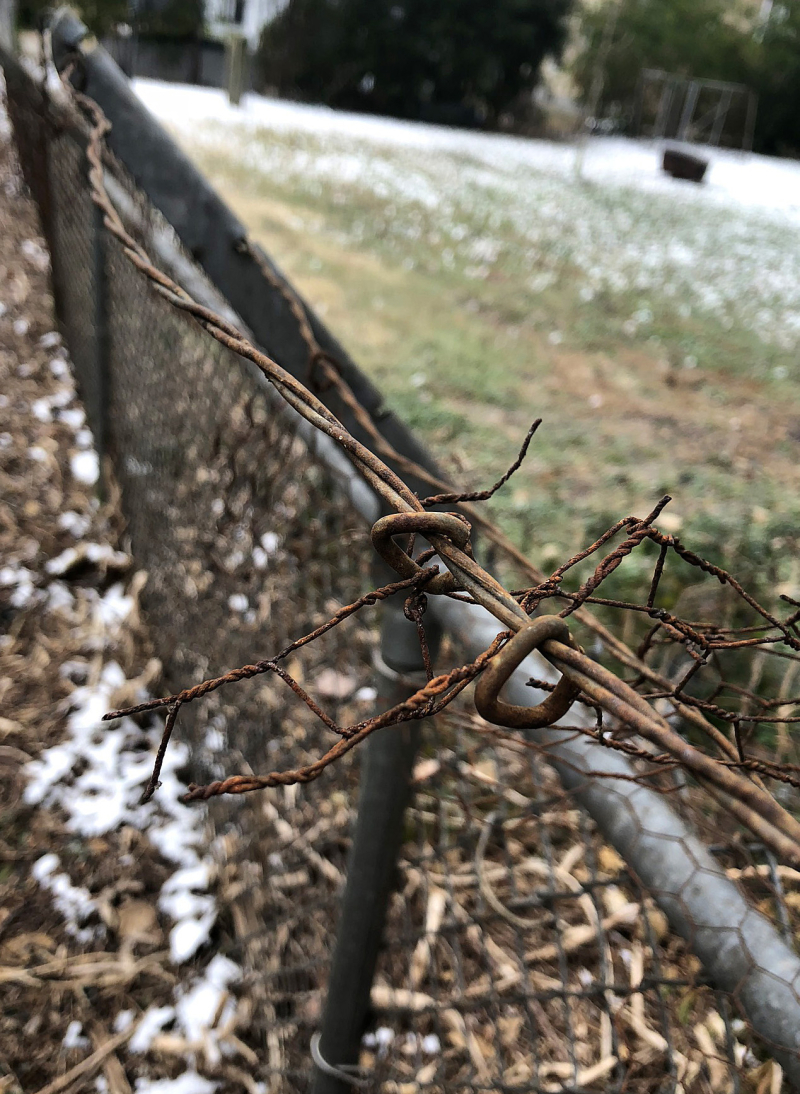 But why? Who or what had they kept in? Or out?

We'll never know. But that fence had to GO. 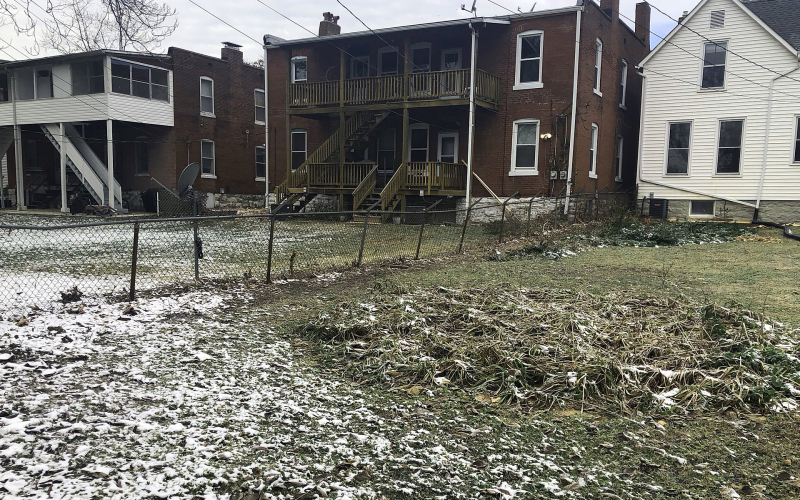 By the way, in the above photo, you can also see the tremendous round mound of ditch lilies, reviled by many but actually pretty harmless, as far as plants go. A big circle of orange ditch lilies doesn't do much for us, aesthetically or self-sufficiency-wise, but I understand they ARE fully edible, so maybe we'll keep some around and experiment.

Again, you can imagine what a relief it was when the fence posts went up. 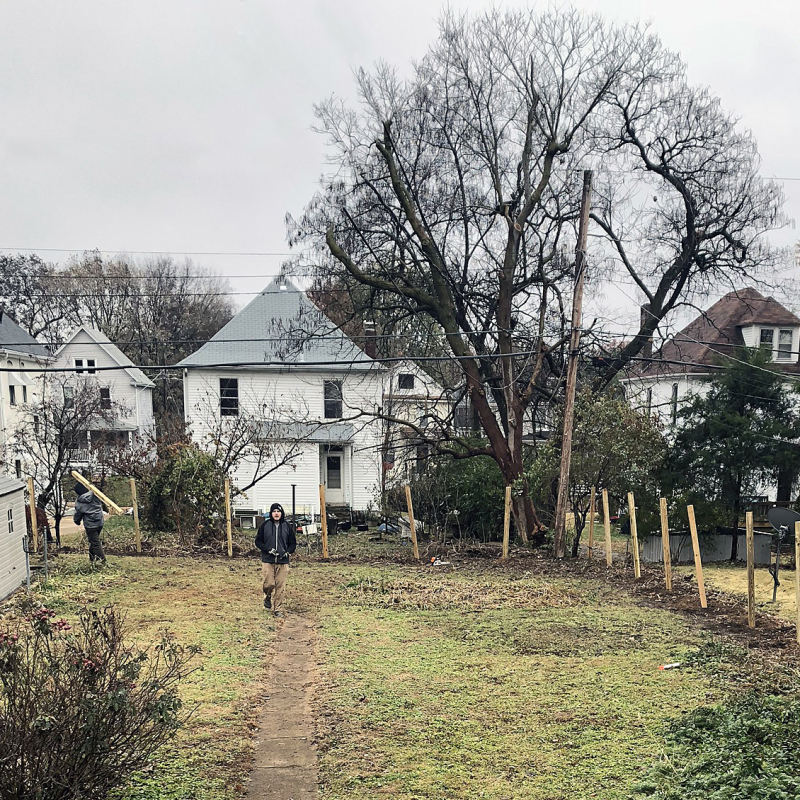 We felt really exposed after the honeysuckle came down and before Just Wooden Fences began work, but once the fence started to take shape, the farmyard began to feel a lot cozier. And we got a ton of compliments from our neighbors on all sides. 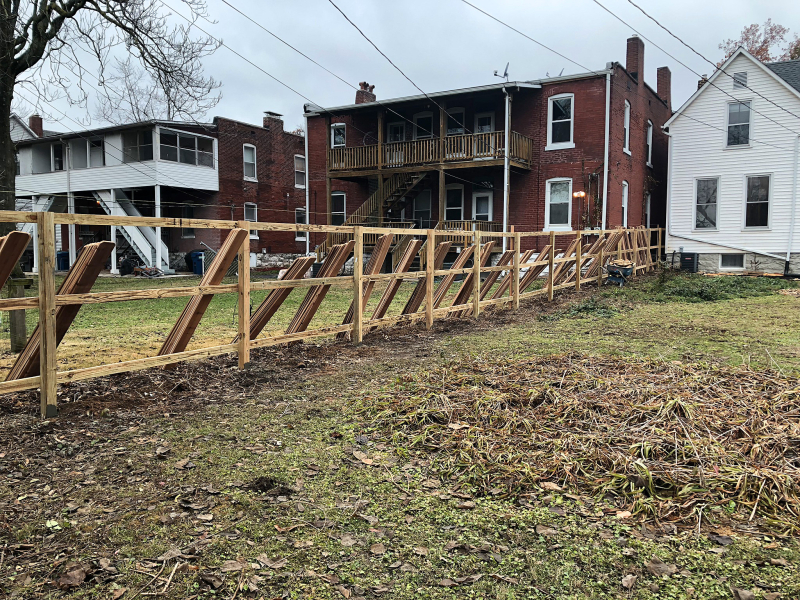 The cedar really is lovely in its natural state, and I wish we could leave it that way, but of course if we didn't stain and seal it, the planks would weather to a dull grey in no time. The fence also wouldn't last as long. 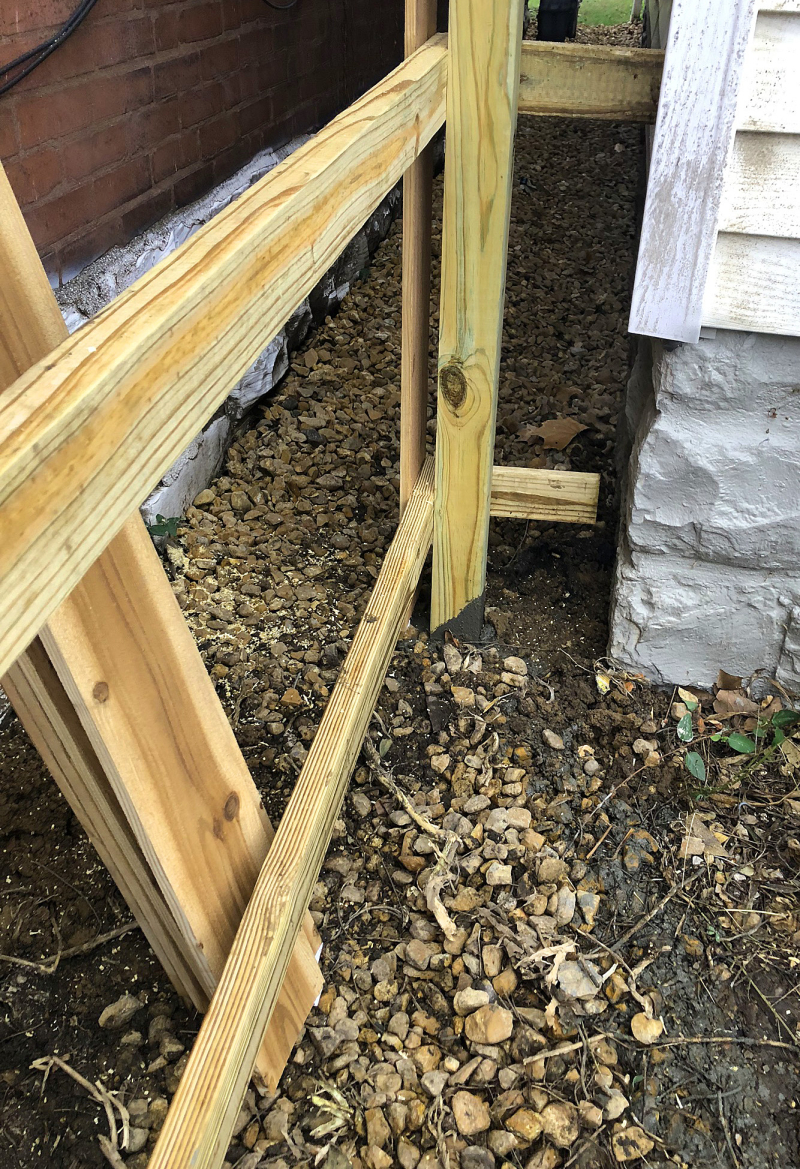 By the way, here above is another view of the french drain installed by Horstmann Bros. The drain is underneath these rocks, between our house and the four-family flat next door. We have had ZERO leaks in the basement since the drain went in, despite torrential downpours, a foot of snowmelt, and generally a ton of moisture all winter long. The farmyard is basically one big mudscape right now. But the basement's dry! Yay! 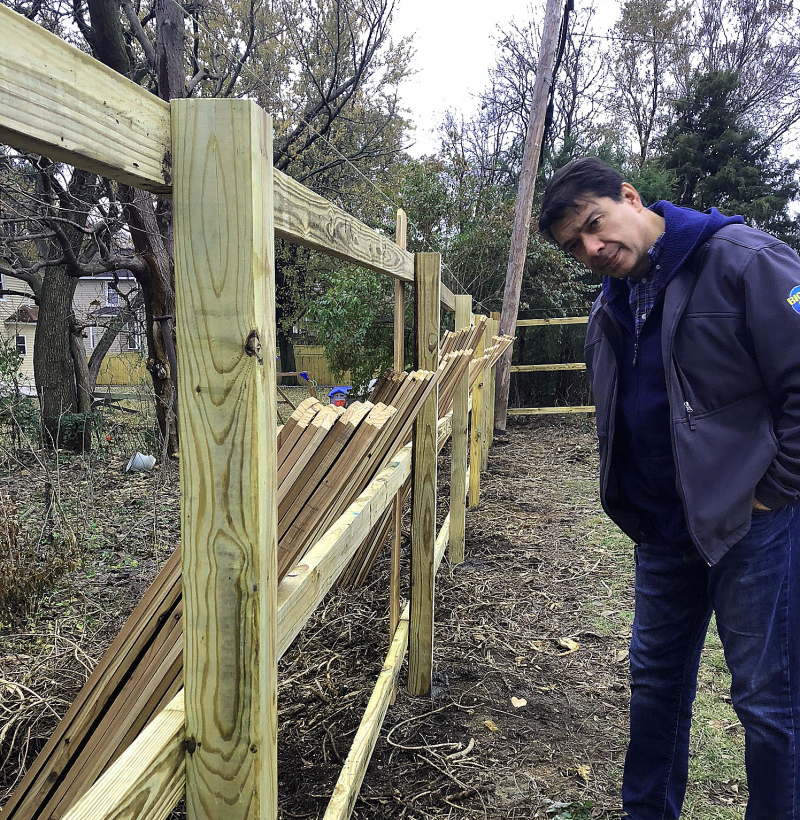 Here's my handsome husband, Anthony, surveying the job, mid-install. Behind him you can see the empty spot near the corner of the yard where we had Horstmann remove a willow tree that had been badly sited beneath power lines and then aggressively topped off. The tree was ill-grown and damaged, half of it succumbing to disease. 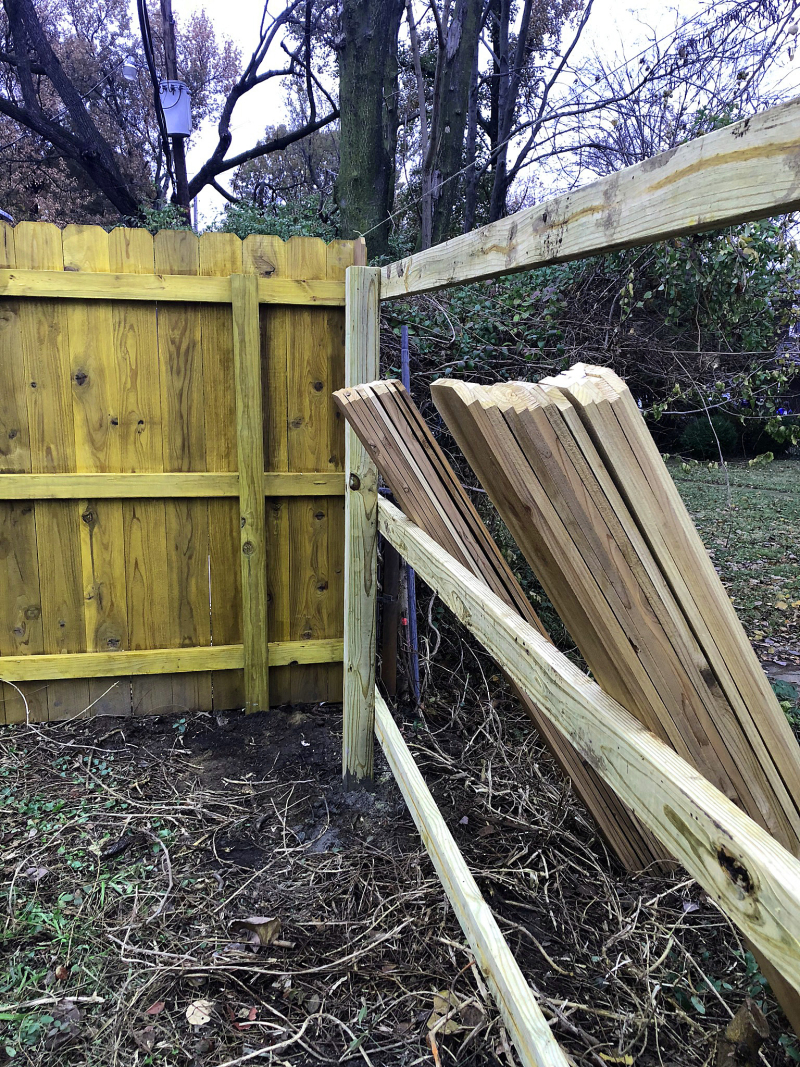 Here's where the new fence joins the section installed in the summer. You can see how the stain gives the wood a golden hue. I still like the look of the raw cedar better, myself, but the golden version is lovely, too, and totally worth it to protect the fence, which is quite an investment!

Next time, I'll share details on our first plantings, which happened all through the late fall and early winter, too. I guess this is surprising to people, since most do all their planting in spring, but it's actually better to plant many trees and plants in the fall and winter, when they are dormant.

Thanks again for your interest in our urban farm project, and please tell us what you think in the comments below. Are you pro-fences? Anti? I know some people think of them as unnecessary barriers, but we wanted the privacy, security, and visual screen only a fence affords.

Note: We received a discount on our fence in exchange for the write-ups on this blog. We wholeheartedly recommend Just Wooden Fences for your next fencing project.

Blog Hiatus, Photos from the Yarden