A Natural, Native Privacy Screen
A Bird Built a Nest Inside Our Friend's Bathroom Window 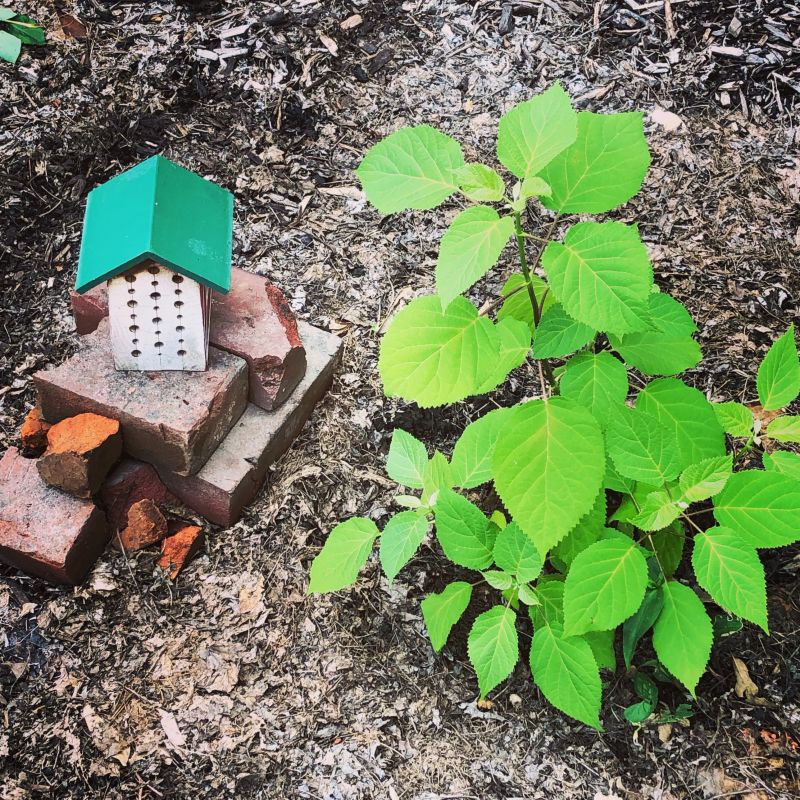 An insect hotel, a wild hydrangea.

Last week, we revealed our grand plan to screen the apartment buildings neighboring Dragon Flower Farm with a row of 'Taylor' juniper trees, in keeping with the spirit of our native-plant focus. This week, we can let the "green screen" intention go and focus on trees and shrubs for their own sakes.

We're still in the throes of a long-term project to replace turf with a blend of plants that are ideally both native and edible, or at least one if both can't be satisfied together. I'll describe the very important turf remediation project in a future post dedicated to one of my favorite topics, mulch. But for now let's talk about the super fun part of gardening: putting in new plants. While we slowly deal with the turf layer on the ground, we've begun to carve out the green infrastructure of the garden, the really big plants that give the garden its bones. That means trees and shrubs.

As briefly mentioned last week, we got a jump on the planting when we put in two important trees in the fall: 1) a serviceberry and 2) a grafted persimmon. The two trees satisfy both criteria in being simultaneously native and edible. The serviceberry (Amelanchier arborea) produces white blooms in spring, followed by red berries that look a lot like blueberries when they ripen in the fall. The birds will eat them, and so will we. The persimmon (Diospyros virginiana) will provide year-round interest, with its characteristic broken-block bark, greenish-yellow blooms, and deep orange fruit, also edible for both humans and animals. If you haven't eaten a ripe persimmon fresh off the tree, I highly recommend it. 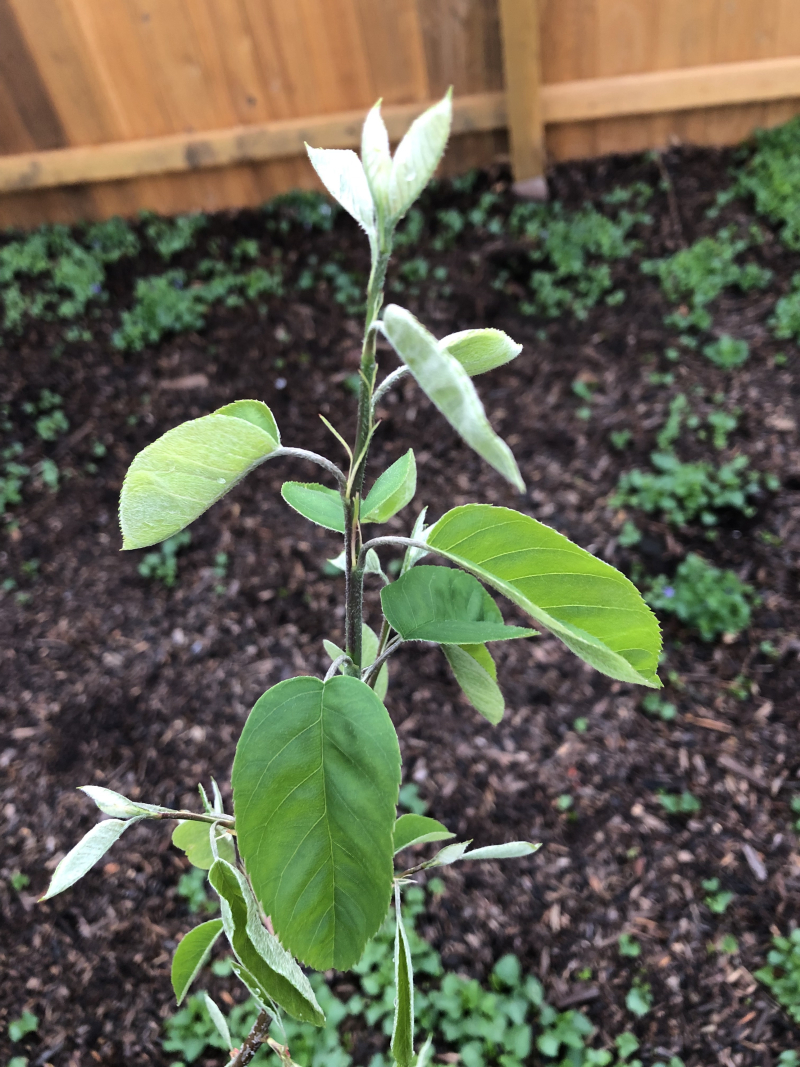 Also last fall, I took time off on my birthday in November and spent the day planting a blueberry patch. The whole affair was prompted by a 75 percent off sale at Home Depot, which really means I rescued four withering blueberry bushes leftover from the summer rush. These were 'Spartan' blueberries, AKA Vaccinium corymbosum, and since blueberries need another species nearby for cross-pollination, I ordered four of another, compatible variety, the 'Dukes,' from Stark Brothers, a Missouri grower recommended to us by the St. Louis Audubon Society. So it's the Dukes vs. the Spartans here at Dragon Flower Farm. 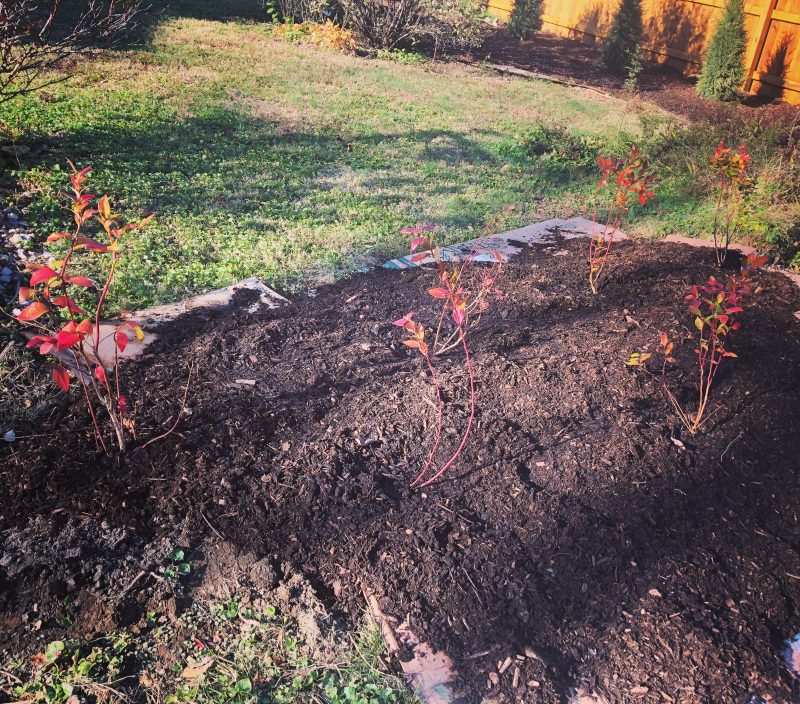 Sadly, the blueberry bushes nearly met a tragic end over the winter, when the rabbits saw them as tasty treats. The Spartans (from Home Depot) suffered the most damage, not surprisingly, as they were far weaker. So early this spring, we cordoned off the patch with netting, and that has kept the rabbits at bay. However, we think the bushes are lacking something. After a bit of research, the list of potential amendments that could do the trick is pretty long: pine needles, citrus peels, lemon juice, sawdust, epsom salt, and even a horseshoe, though that last one seems to be as much for the iron as for the luck. Wish us some of the latter as we try these out. 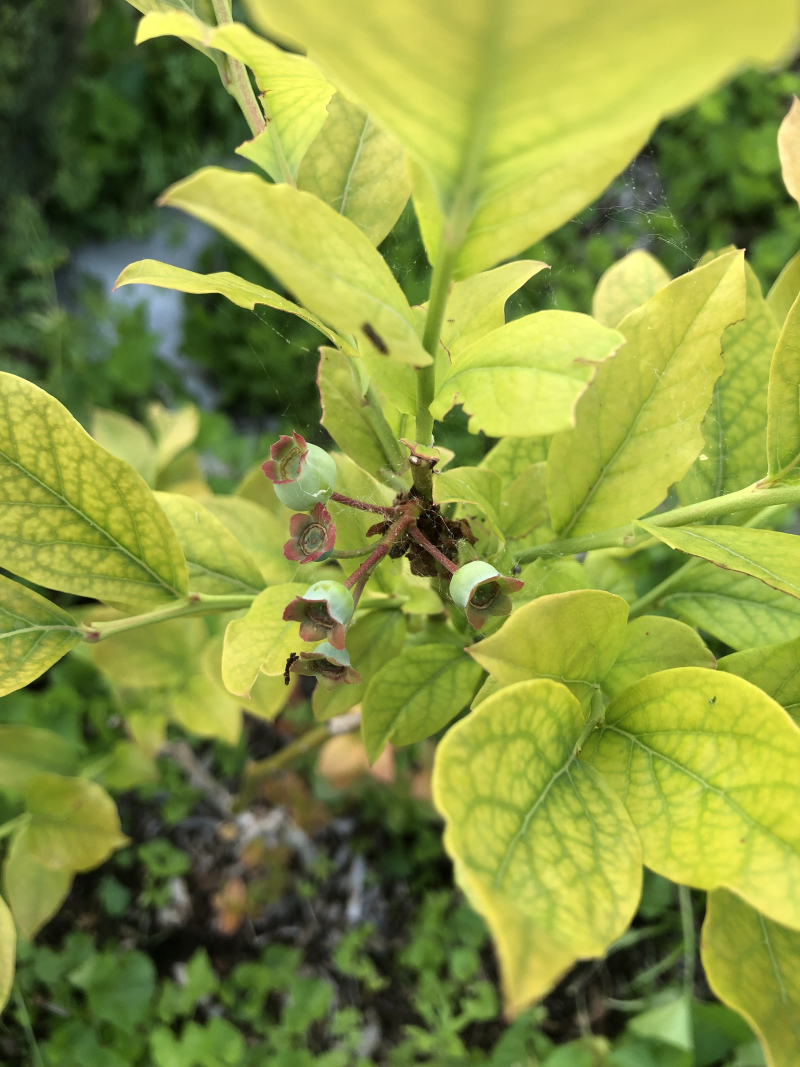 One of the Dukes has already produced a bit of fruit. So the Dukes win.

That was that for the fall. Our spring planting began with a trip to the Butterfly House for the Wild Ones native plant sale - I mentioned this sale excursion previously when I went on about daffodils in April. (I told you I'd go into more detail later about the native plants we scored. Look at this, promise kept!) Channeling our inner Monty Pythons, we judiciously chose three shrubberies, all natives, of course: 1) New Jersey tea, 2) hazelnut, and 3) wild hydrangea.

The New Jersey tea leaves have been used as a non-caffeinated substitute for tea, the hazelnut is exactly what it sounds like, and the hydrangea has some known medicinal properties. So while the hazelnut squarely satisfies both the native and edible criteria, arguably, the other two do as well. 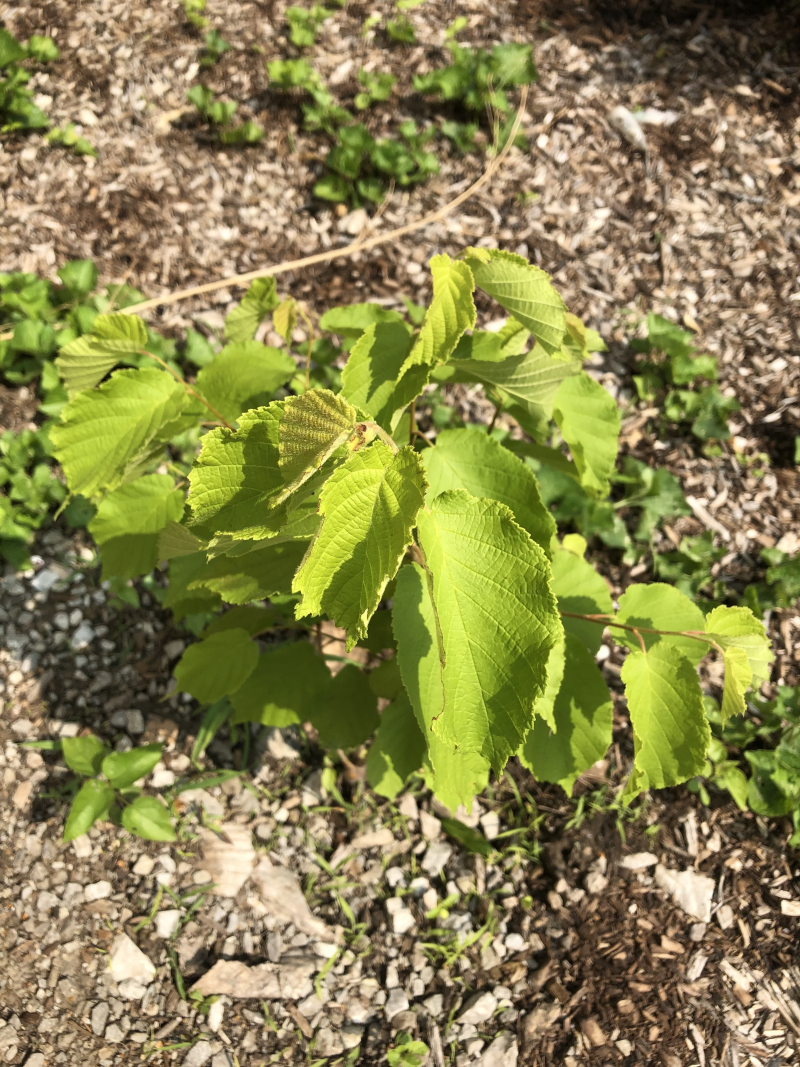 This plant will produce hazelnuts!

Our next wave of plantings happened over the past two weekends. This is a bit later than we would have liked, but we had that epic trip to Helsinki, Finland, in early May, and it took some time to get back into the routine after that.

The man and I have been talking about pawpaw for about a year, but we had trouble finding any last fall (we looked, we called, we scoured the web). It's native to Missouri and in high demand, as it produces a delicious fruit most people liken to banana custard (yum). Anthony sometimes lapses into a Walla Walla-by-way-of-Oklahoma mode of speaking he inherited from his father, whose people were Okies who up and decided at one point to head even further west. One of Anthony's country sayings involves a pawpaw and a prickly pear (which, incidentally, is another native, edible plant):

When you pick a pawpaw or prickly pear,

And you prick a raw paw, next time beware.

Don’t pick the prickly pear by the paw;

When you pick a pear, try to use the claw.

Of course, the Internet tells me this is from the Jungle Book, which makes sense, since my husband knows all the words to "I Wanna Be Like You," and now you can see why I adore this big Baloo.

Back to the plants. We wandered over to Sugar Creek a couple of weekends ago, and lo and behold, they had a mess of pawpaws. The only problem was, they didn't have the sexes marked, and you need both a male and female in order to get fruit. Apparently, telling the sex of a pawpaw is known to be difficult, at least until it flowers. We took our chances and picked two, but if we end up with two of the same, we'll just add a grafted pawpaw later next fall. Like our aforementioned persimmon, this would have both a male and female grafted onto the same trunk, so it will be self-pollinating, and it will pollinate the other two, because science.

CORRECTION: Some folks in the Missouri Native Plant Society's Facebook group schooled us on the fact that pawpaw flowers are "perfect," which means they contain both male and female parts. The trick with pollinating them is actually that they need another species of pawpaw nearby, and the pollination is typically done by flies. What this means is that people sometimes hang raw meat among the branches of the pawpaw to attract the flies. That or you can hand-pollinate with a special brush. Hmm...

Pawpaws (Asimina triloba) like a bit of shade, so we planted them where the neighboring building on the other side casts a shadow all day except in the morning. Here they are next to a funky little water bath I made for the birds, to Audubon Society specs. Birds like shallow watering areas, with places to perch. We haven't had any takers yet, and they prefer moving water, but a friend told me to wait a month before giving up or moving it. 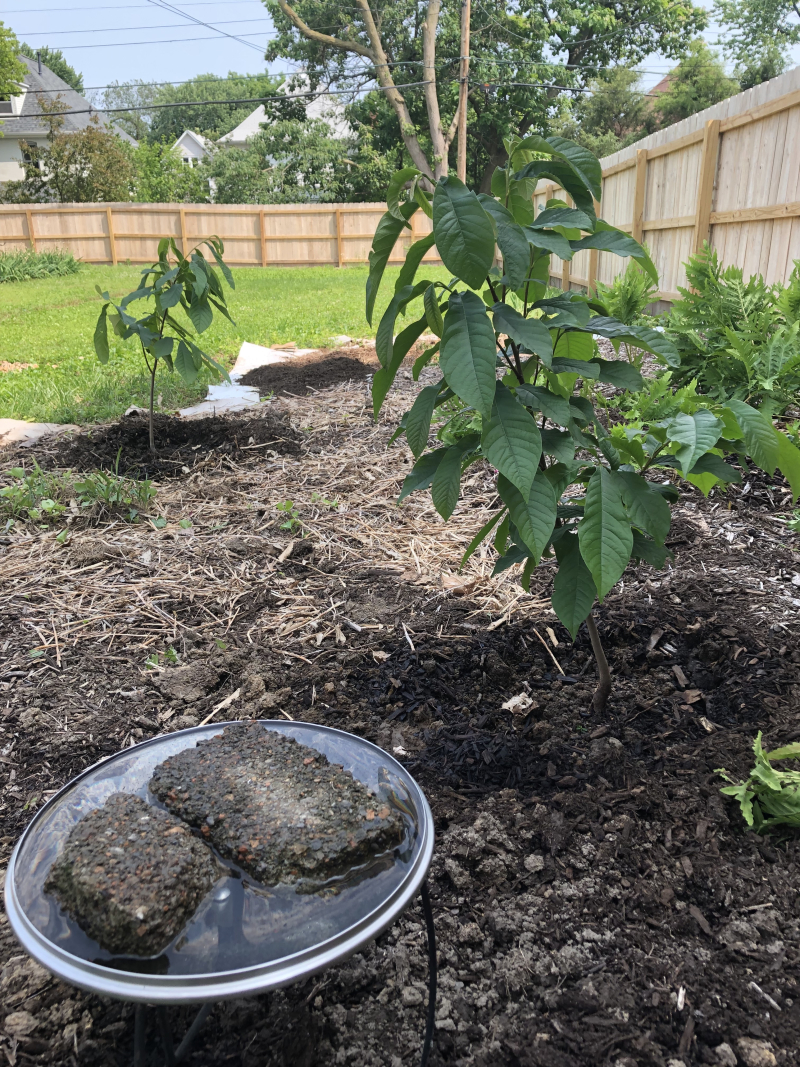 We scored two other lovely natives at Sugar Creek: 1) a vernal witch hazel and 2) a chokecherry. I was really impressed with the sheer number of natives this garden center had on hand, double what I'd seen there in the fall. The staff mentioned the interest in native plants had certainly gone up, which is great to see.

The chokecherry got a bit beat up in a dramatic thunderstorm. Hail pummeled it, knocking it over, and when we went to plant it, the leaves had curled. It seems to be recovering now, but when it went in, it looked a bit in shock. 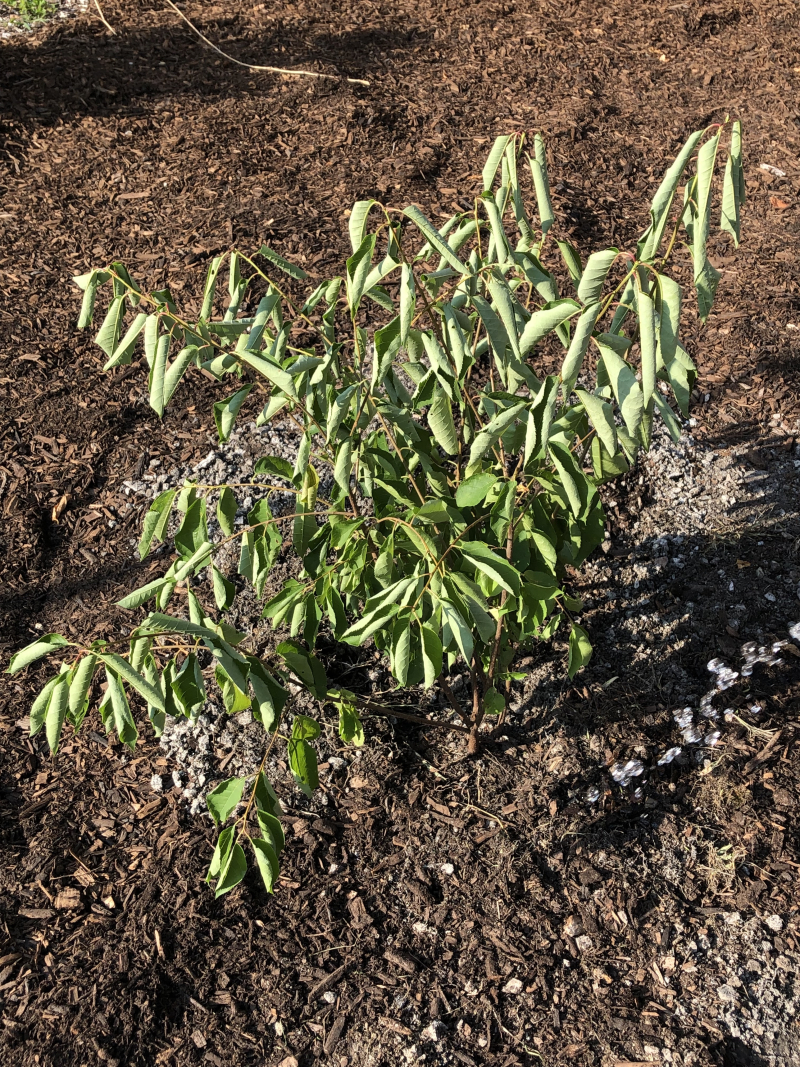 This lovely tree will grow to 30 feet, eventually screening the back part of the garden from the apartment building as well. Its berries are too astringent to eat off the tree, hence the name, but they do fine in jams, sauces, and the like, and the birds find them delicious.

We have a weird little corner that slopes down, receiving more water than other parts of the garden. It's directly under telephone wires, too, and this is right where we'd removed a stunted, diseased willow tree that had been topped too many times. So in this spot we put an Ozark witch hazel (Hamamelis vernalis), which will only grow to 6 feet. It will give us our first blooms of the new year - bright orange, ribbony crinkles appearing on bare twig as early as January. 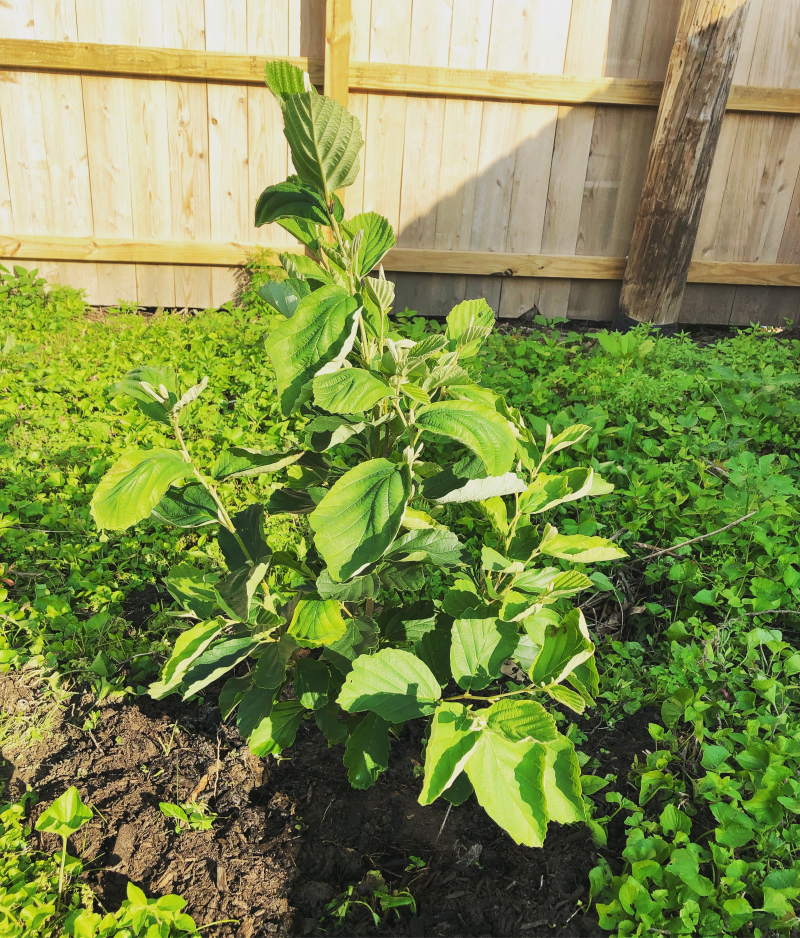 Last came a few fruit trees. We opted for pears, as they work marvelously for my arbitrarily-sensitive-to-everything eating situation; I've never reacted to pear. A full-sized Bartlett variety called 'Moonglow' went in right at the end of a long sidewalk path out our back door. The path was bad feng shui without the tree, draining energy out of the house, so the tree placed there blocks and balances instead. Its pollinator pair is a semi-dwarf Bartlett. 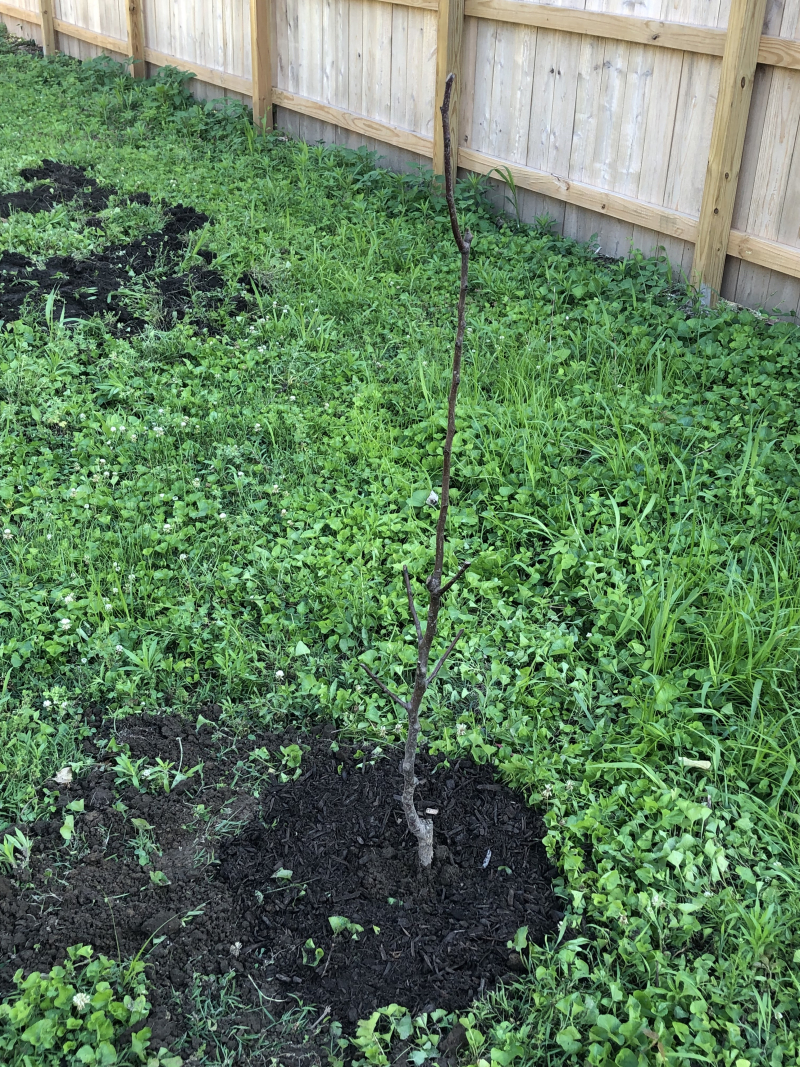 Fruit trees just look like twigs when they go in as bare-root saplings, and that's OK.

These pears aren't native, of course, but we made an exception in light of the future food value. Closer to native though not truly native is the Arkansas black apple we planted nearby. Its flesh will be dark red, nearly black, and it's rust-resistant, which is a good thing in light of the red cedars we have on the property, a potential source of rust disease. 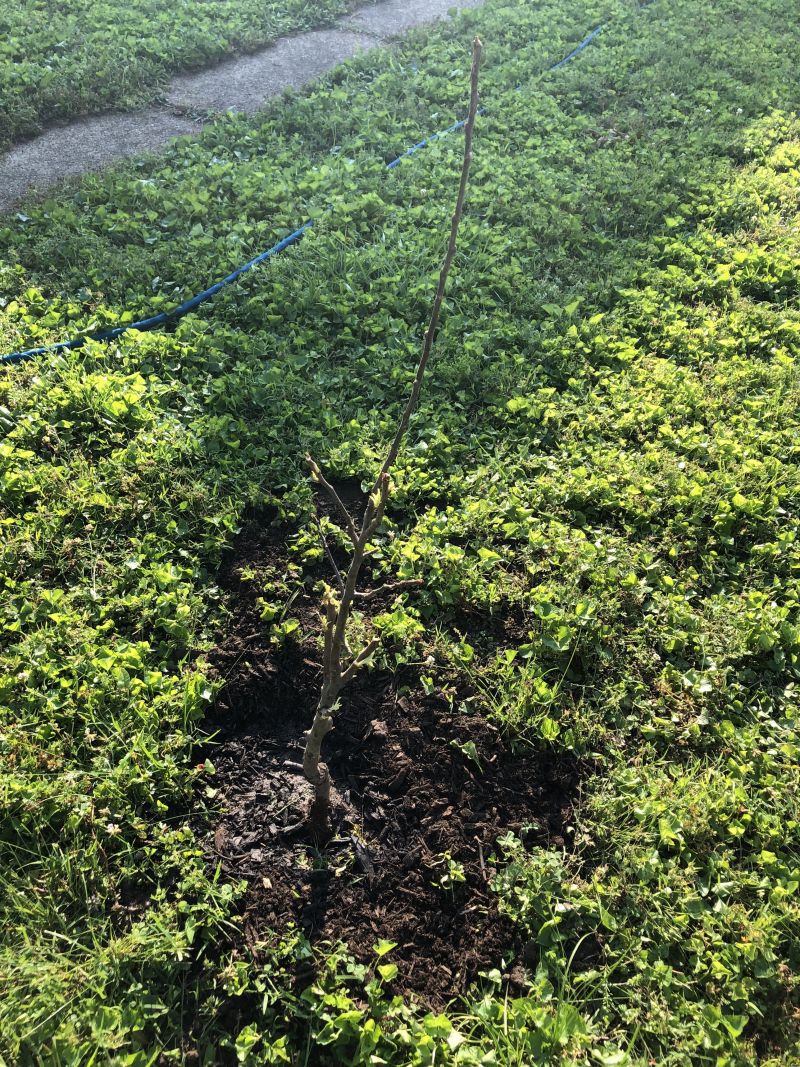 So there you have it. Since fall, we've planted 17 trees and 14 bushes on a property that had zero trees and only a few ornamental bushes. I realize this is a lot of plants already, but the reality is that we'll wait anywhere from three to five years before we see any output, so we wanted to get these bearing plants in as soon as we could. They also form the garden's main structure. We needed the bones in place before we can layer on flowers, vegetables, herbs, and other plants. So far, nothing has failed to take root and grow. We think that's a great sign.