A Bird Built a Nest Inside Our Friend's Bathroom Window
Kick Up Your Heels on the Fourth of July - Literally! 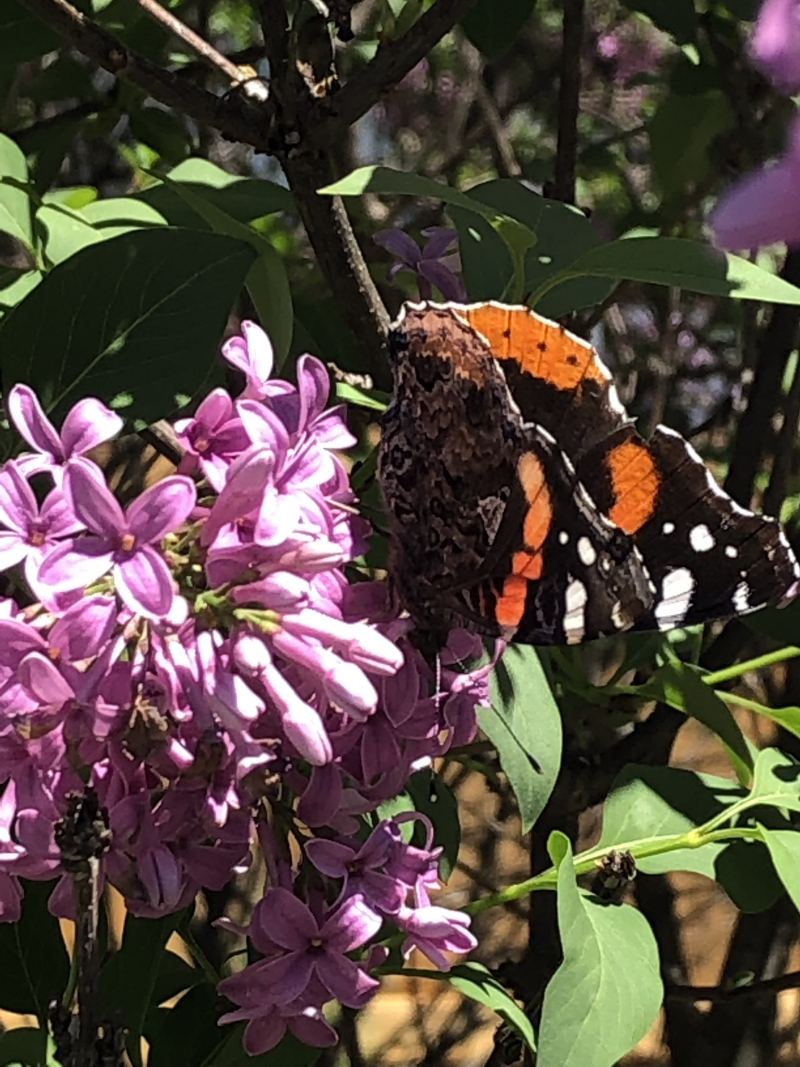 Not all ornamentals are thugs.

I've spent a good deal of time talking about what we had to extricate from the Dragon Flower Farm, i.e., invasive plants like honeysuckle vine, winter creeper, and autumn clematis. Yes, in certain moments, it's felt like nothing more than the tragic tale of what the botanists call "disturbed" areas in nature. But not everything onsite when we bought the house in November 2017 was "undesirable." You might be wondering what we're planning to keep. Here's a list by category.

Let me start with the lilac.

Oh, my God. Do we love our lilac. Lilacs naturally stir a romantic, traditional feeling in the heart, I think, without feeling overly fussy or too precious the way some classic ornamentals can. And, as pictured in the photo above, our venerable old lilac has no trouble attracting pollinators during its dramatic show of springtime blooms. 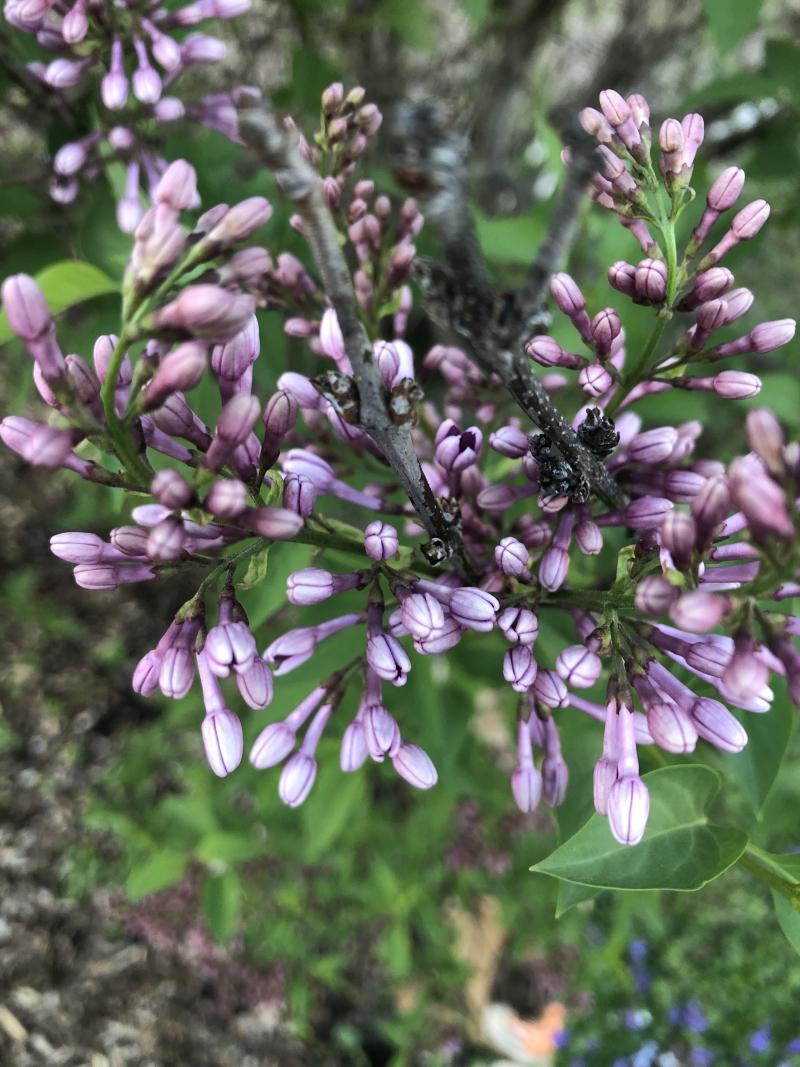 It's the focal point of the garden in spring, providing a lovely backdrop for our seating area (and some semblance of privacy), with a heady scent of lilac wafting into the house when the windows are open. 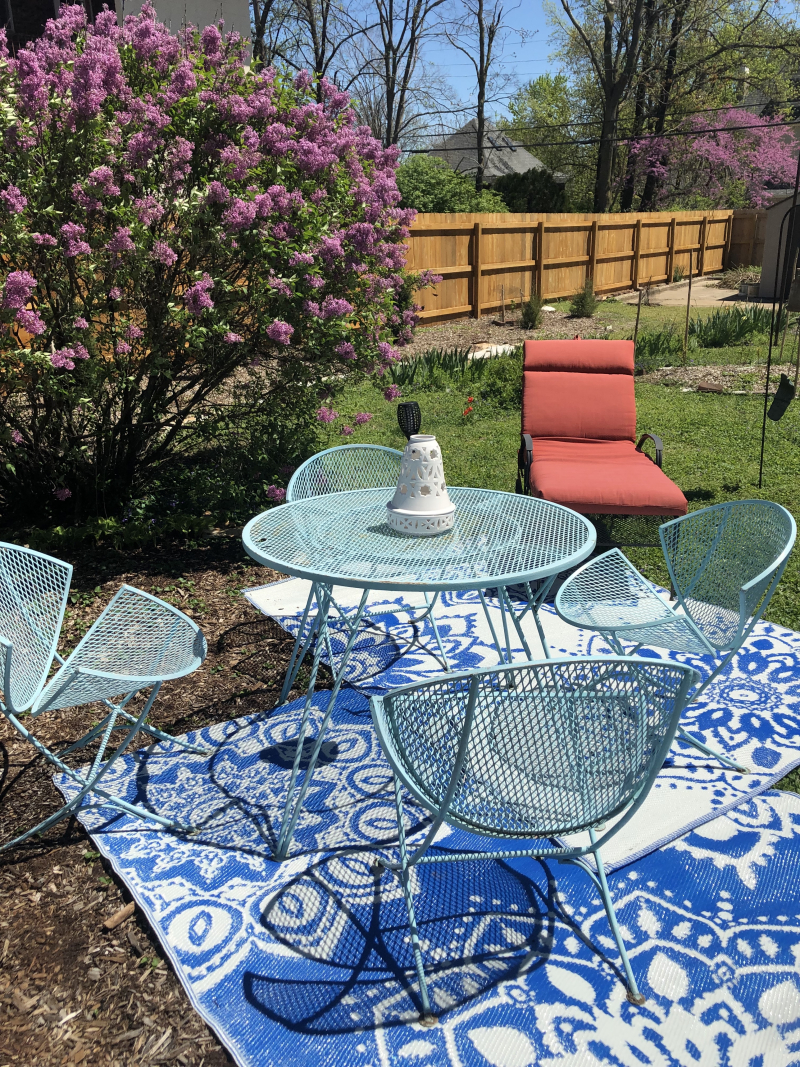 I once had a white lilac, when I lived in Tacoma, but this lilac-colored lilac really takes the cake. Speaking of cake, you can decorate cakes with the lilac flowers, as some people do. The blossoms are edible for both humans and animals. Here you can see Chaco chomping down the sugary goodness. 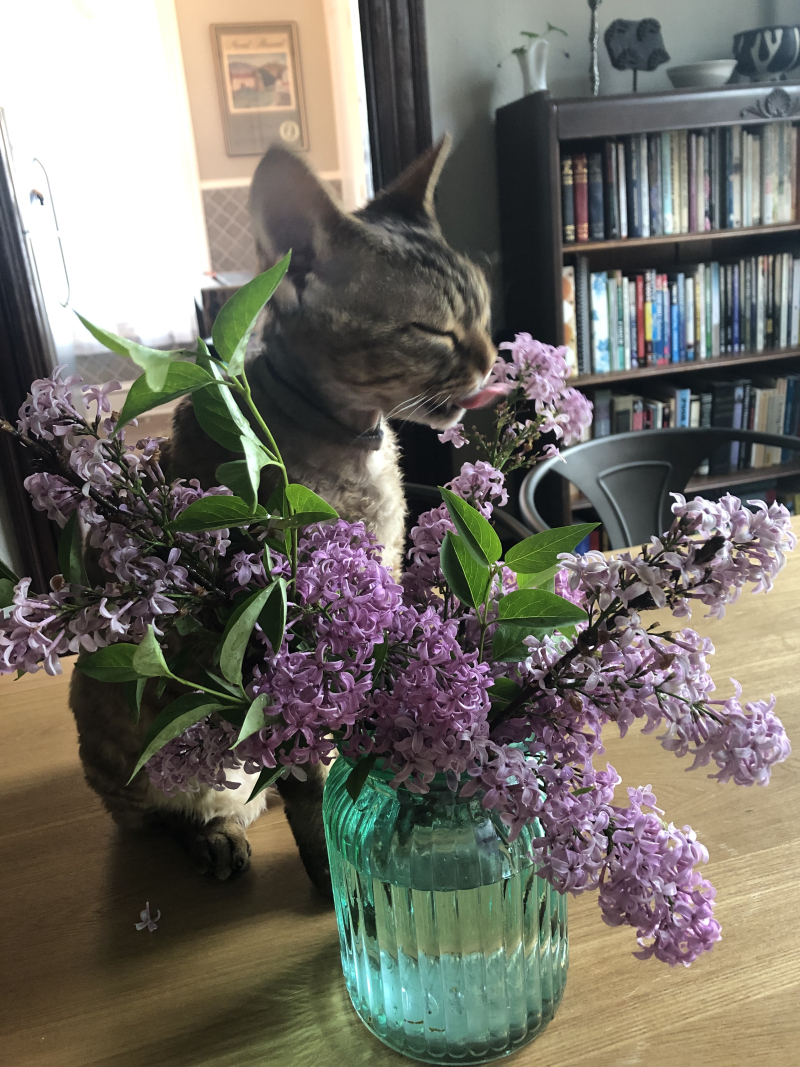 Our lilac has been allowed to sucker out into a rangy bush shape, but this spring after the blooms faded, I cut it back with as much tough love as I could muster. It's a bit more tree-shaped now, but it will likely always be more bush than tree. Either way, it provides gorgeous cut flowers for inside, and this year, it bloomed precisely on time to play a role in Easter decorating, which was nice since we hosted the fams this year.

Lilac has other uses as well, which besides its beauty make it a candidate for keeping around. You can of course fashion sachets for your linen drawers out of the blooms, but they're also used to make syrups, teas, and candies. Got another use for lilac that I haven't listed? Tell us in the comments below.

The other ornamental bush we've kept so far is the rose, which we're told is likely the 'Knockout' rose variety. It's a bit of a statue, in that few insects are drawn to it, but it's a big, healthy bush, and rose petals do have a wide variety of uses, from rose water to tea. Alas, this one doesn't produce many rose hips, but at least it has all those other uses, besides being gorgeous and fragrant.

We noticed early on that a large number of ferns were thriving in two shady areas, and we had them ID'd by the Audubon Society as native sensitive fern (Onoclea sensibilis). Unfortunately, the bulk of them were interwoven with honeysuckle vine and winter creeper, two thugs we needed to eradicate, so we had to cover over the ferns with our mix of cardboard and mulch meant to make anything underneath die off. This biodegradable mulch method worked great, and to our great joy, the sensitive fern, and NOT the two invasives, came bursting right up through the mulch. So we saved the native fern and destroyed the nasties. 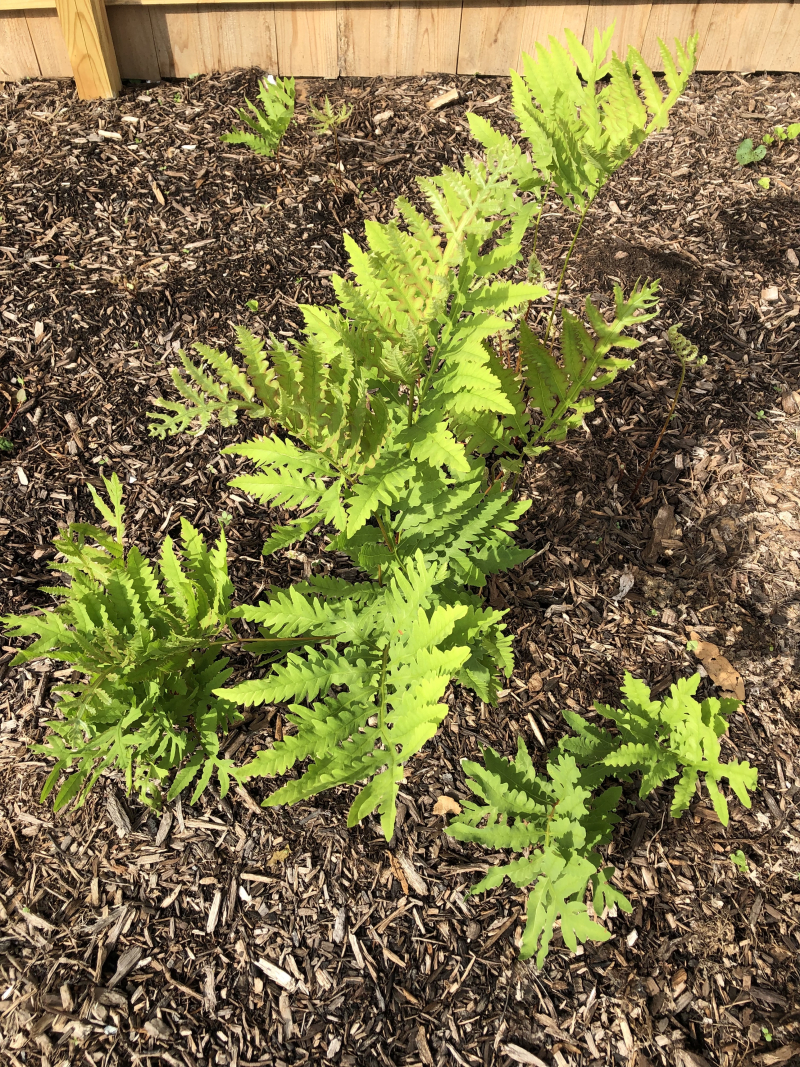 The second native that seemed undeterred by our cardboard/mulch barrier is vine milkweed. This one grows in profusion in the St. Louis area, and I remember it from when I lived here before. I didn't pull it out then, and I'm not going to now, either. Some people seem bothered by it, calling it a garden weed, but the monarchs love it and thrive on it. Given a choice between offending garden visitors by the sight of a so-called weed and giving monarchs and other pollinators what they need to survive, I side with the pollinators. 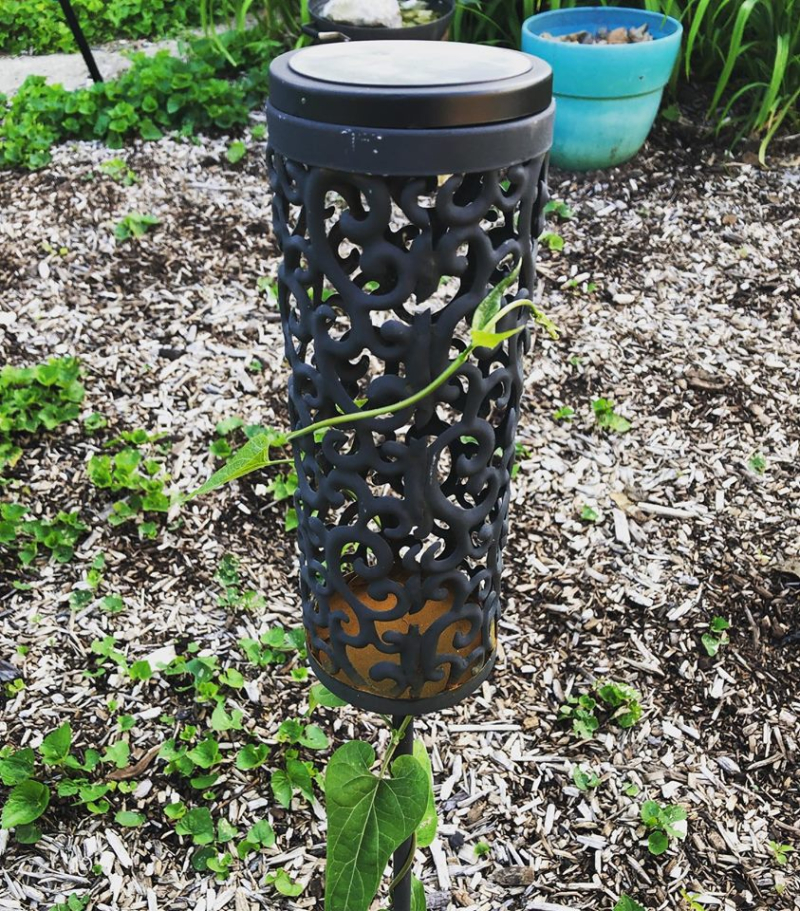 A lot of what we need to do to survive on this planet - and we need those pollinators in order to ensure our future food supply - rests on changing our mindsets about relatively subjective things, like what a garden should look like. If you want your garden hermetically sealed and angled off with a lot of chemicals and gas-powered tools, then have yourself a yard full of plant statues and grass that does nothing for the life cycle other than sit there looking green. But don't you think the vine above is lovely, twining around our solar lantern?

Speaking of subjective viewpoints, we had another so-called weed growing to beat the band this year: cleavers. The Missouri Botanical Garden lists it among their "Winter Annual Weeds," and outlines methods for its eradication. But I'd come across cleavers before, back when I worked at New Dawn Natural Foods, which used to be on Grand Avenue here in St. Louis' Grand South Grand neighborhood, before the regentrification wave changed this funky ghetto into a strip of trendy shops and restaurants. A longtime sufferer of a condition called interstitial cystitis, I took cleavers tea for its known anti-inflammatory properties, specifically related to the bladder. So when we ID'd it coming up in the garden, Anthony gathered a bunch and used it to make a cold infusion. Besides the bladder tonic effect, I noticed the swelling in my feet and hands go down after drinking it. 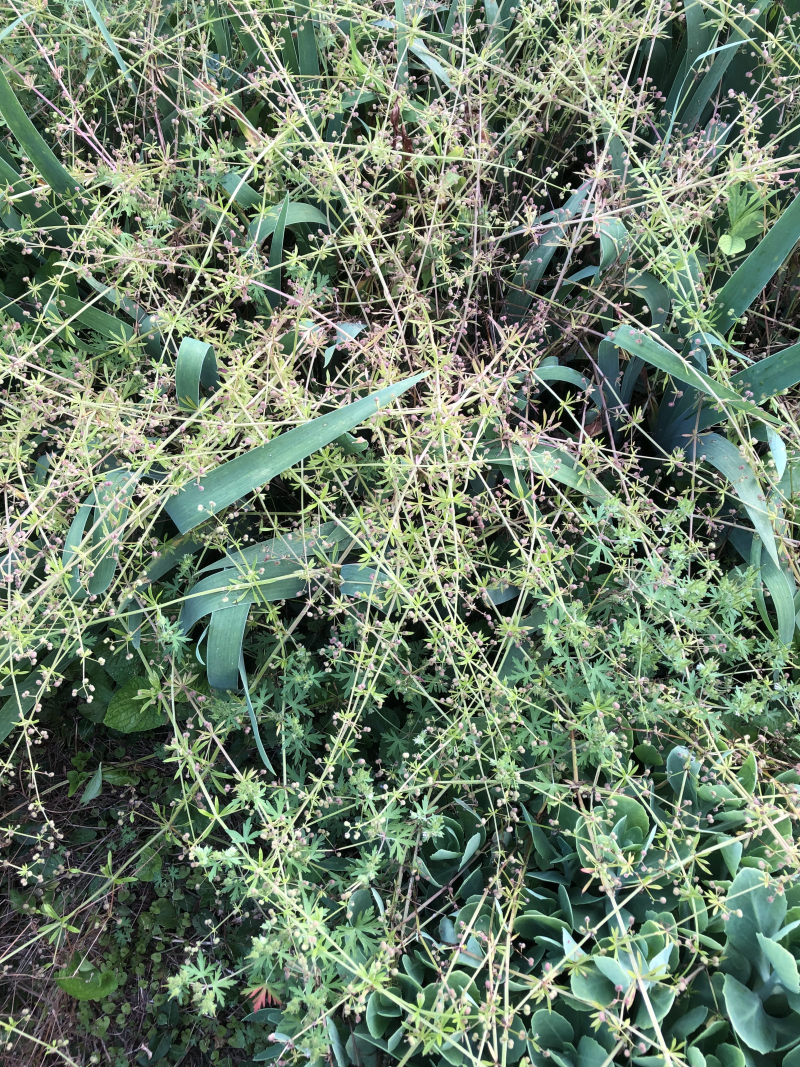 The name "cleavers" comes from the seed-distribution method for this plant, which is via hooked burs that stick to animal pelts, or in this case, human socks. Keep at least a few cleavers around in your garden, if only for the botanical fascination.

We are also blessed with a number of sedums, aka stonecrop, of the variety Hylotelephium 'Herbstfreude' AUTUMN JOY. The genus is native to North America, but what's growing in our yard is a cultivated variety, hence the special name here in all caps. Still, they're known for their great value to butterflies, specifically, and are recommended for fall color and pollinator-friendliness by many.

If you have any doubt about the butterfly population's preference for this flower, come on by the Dragon Flower Farmhouse. In late summer and early fall, it's a butterfly festival.

The violets growing in abundance across Dragon Flower Farm make us nearly as happy as the lilac does - maybe even moreso because Viola sororia is another freebie native. Like the sensitive fern, the violets were only too happy about the mulch situation, and no longer having to compete with turf grass for space, they seeded themselves all over the top of it. 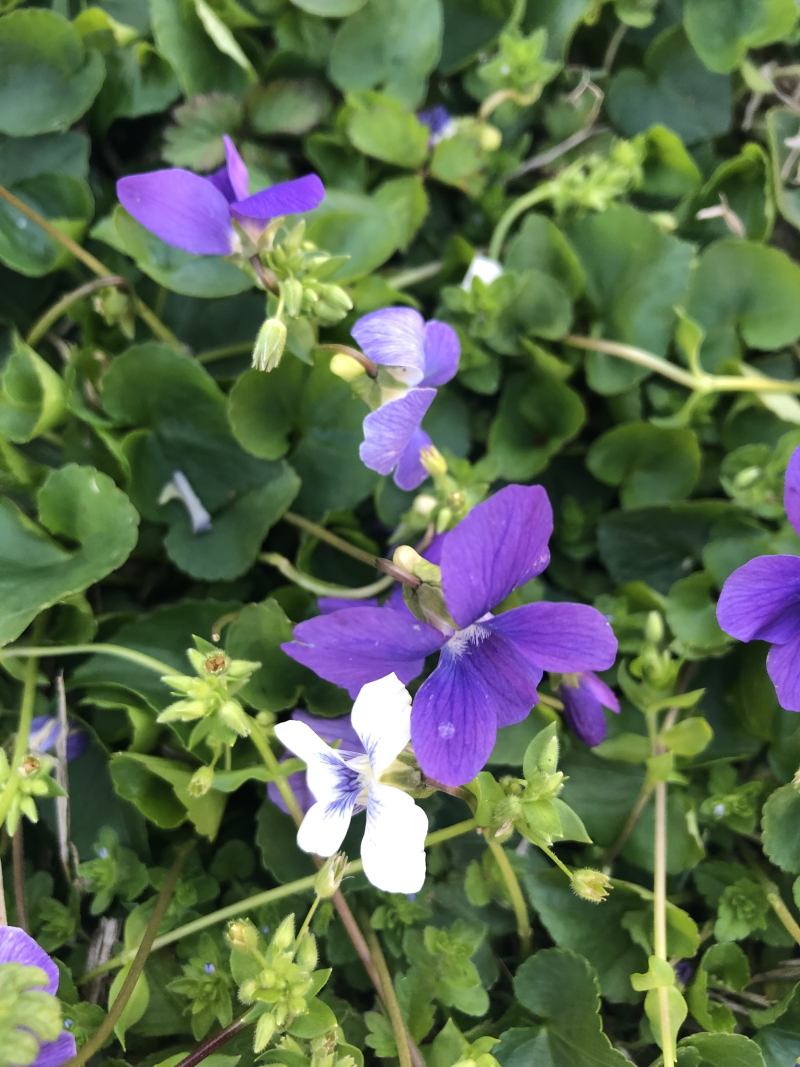 Violet makes a lovely, soft ground cover, and the fritillaries in particular flock to it.

Lastly, we're default-keeping many of our flowering bulbs. I say 'default' because we're not actively trying to dig them up or anything, but we're not going out of our way to save them if they are interplanted with something we really must remove, like winter creeper. (We do put them in pots and give them to friends and family, though. We're not monsters!)

One of the problems with the property is that the blooming was set to all happen in the spring. It's a common problem I've seen in yards planted only with ornamentals. While I will say that we've got a staggered series of blooms throughout the spring, sadly, the only thing blooming any other time of the year is that late summer sedum. This is something we've already started to rectify with our choice of new trees and shrubs, but for now it's heavily weighted toward spring. And what a spring it is! 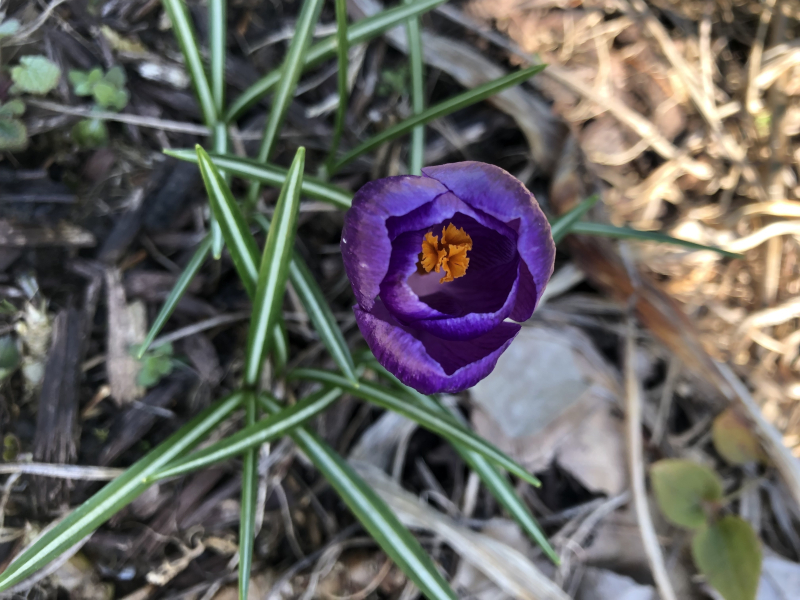 It all starts with the first crocus. 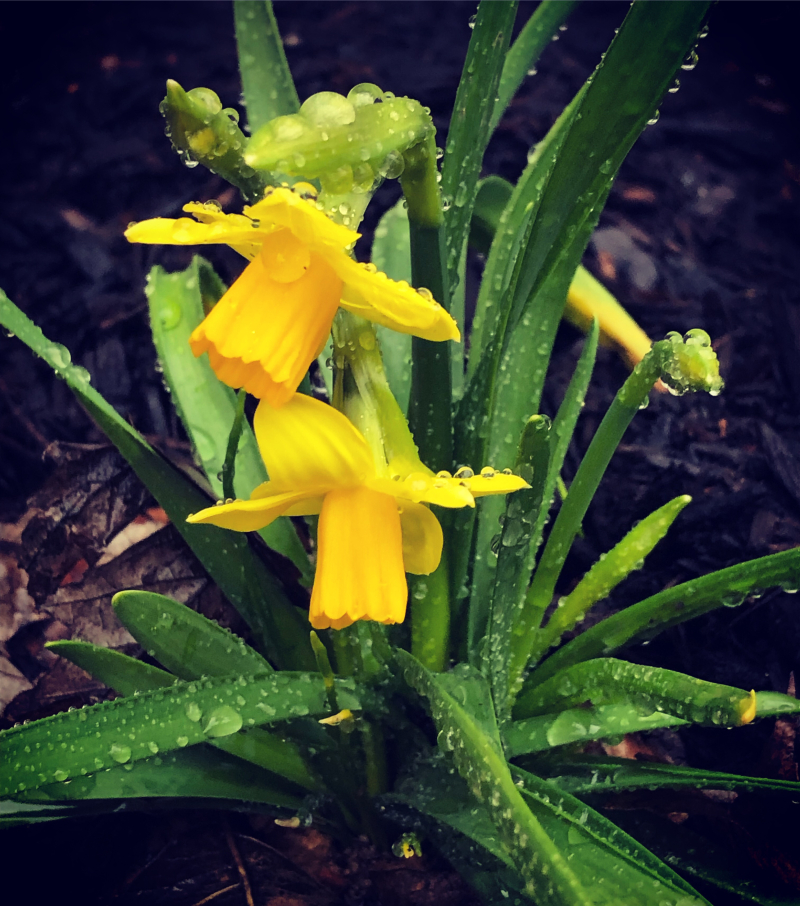 Then the daffodils emerge, trumpeting the arrival of spring.

Oh, did I mention daffodils? If you're paying any attention at all, you know we're daffy about them. This is a double daffodil called Narcissus 'Tahiti.'

After that, it's iris avenue, with three incredible hues on display in succession. 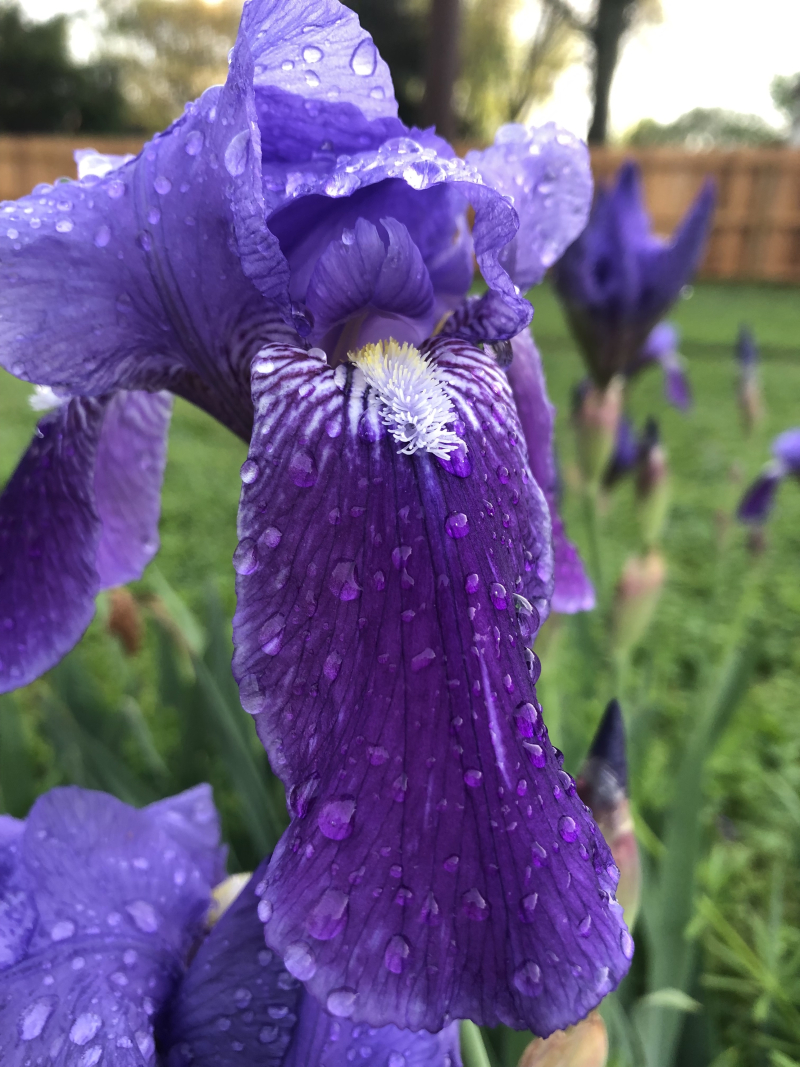 Then a big mess of yellow bearded irises.

There are probably about 100 yellow bearded irises on the property. I love to bring them in the house for cut flower displays, but Chaco ate them and threw up, so they had to be taken outside, as they're toxic to cats. Some were growing up through winter creeper and honeysuckle, so I dug them out, put them in pots, and gave them to my sister to distribute amongst her neighbors. 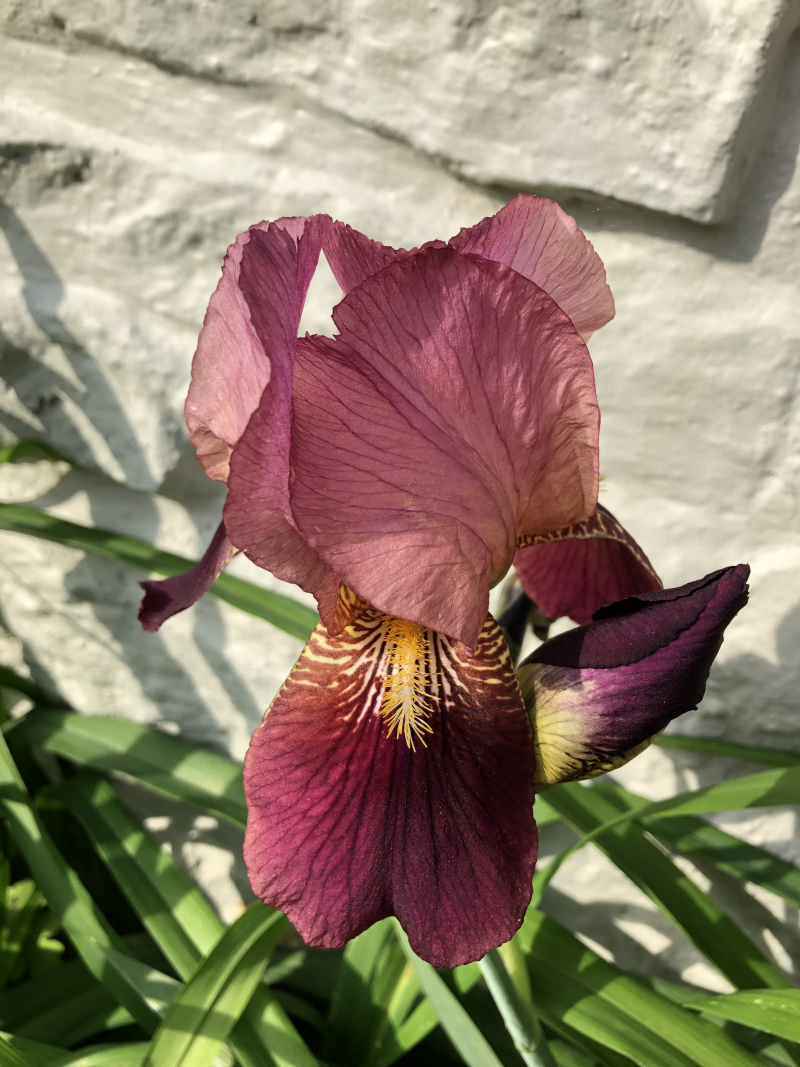 The last iris to bloom is a rarer, wine-colored variety. Definitely a keeper.

Deciding the fate of plants is a heady sort of power, and we don't take it lightly. We've armed ourselves with resources and support from the St. Louis Audubon Society, Wild Ones, Missouri Botanical Garden, the Missouri Native Plant Society, and others. We reserve the right to change our minds and admit to feeling conflicted about some plants. For example, we have ornamental azaleas in the front, and while we wish they were useful Ozark native azaleas, they're not. They'll bloom themselves silly, and not a single flying insect will even take notice. They probably need to go, but who wants to rip out an old, sturdy bush like that?

Thanks for your interest in our Dragon Flower Farm project. By the way, now that I've written this, I'm wondering if we should have called the place 'Viola Sororia' instead. What do you think?