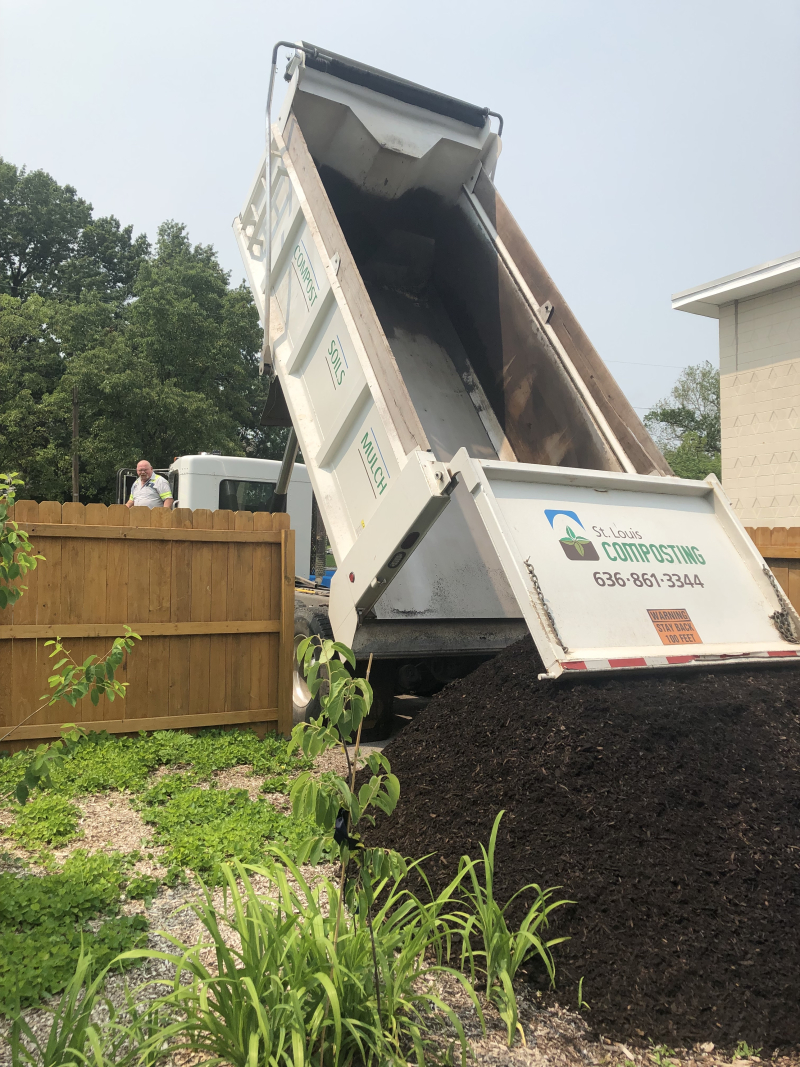 A driver for St. Louis Composting dumps a load of mulch at Dragon Flower Farm. All photos mine unless noted.

Our modern prejudices have turned "dirt" into not much more than a four-letter word. Dirt connotes something of absolutely no value - or else something distasteful, a thing that's been sullied against its more preferred state of pristine perfection. Of course there's also the sexy connotation of "dirty." Still, dirt is hardly ever seen as something good unless it is a subverted turn-on. "Dirt poor" is somehow even less desirable than simply poor; no one wants to be a "dirt farmer," and "hitting pay dirt" is the equivalent of being able to turn worthless straw into gold.

But as with a great many things, we seem to be realizing dirt's true worth just as we're losing it. Increasingly, along with fears about overpopulation and climate change, eroding topsoil is of great concern, more and more people talking about the importance of soil health. "You're nothing but dirt" is never meant as a compliment, but, we're beginning to realize, maybe it should be.

When it comes to dirt and your average backyard gardener, the traditional route to better results is to amend what you've got with fertilizer. But I've always favored organic methods, so I've never added bags of synthesized nutrients to my soil. The closest I've come was in the early 2000s, when I added a substance called TAGRO to my yard in Tacoma, Wash. TAGRO is pasteurized wastewater biosolids. Yup, that's a hefty euphemism for "people poo." But hey, what used to be called "night soil" has been a thing for centuries, and the brilliant folks working for the City of Tacoma have just found a way of making that an awful lot nicer. 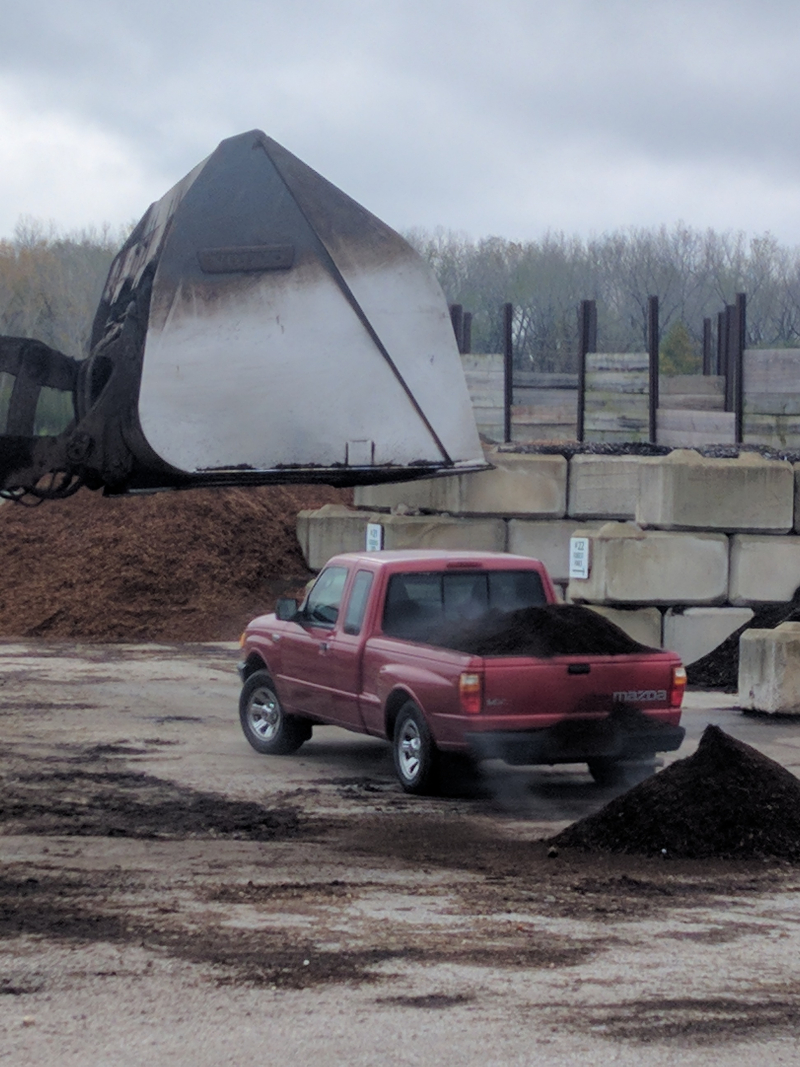 Our pickup truck, getting loaded down with mulch at St. Louis Composting. Photo source: Jason Ives.

Still, it's a shit-ton of work to have a truckload of TAGRO dumped in your driveway and then have to distribute it by wheelbarrow and shovel all over your yard every year or so. And even though that particular soil amendment is environmentally friendly, it doesn't really mimic the decomposition process you see in a healthy ecosystem, such as a forest. So when I stumbled upon The Ruth Stout No-Work Garden Book at a Tacoma Library book sale, my gardening life was forever changed.

A renegade in the gardening world, Stout launched a mulching movement in 1971 with her claim that all you have to do to achieve a no-work garden is keep a thick layer of mulch on your ground year-round. But over the years, this has trickled down as only a decent appreciation for mulch, which almost everyone agrees discourages weeds and helps keep moisture in the ground, minimizing the need to water. But most people stop there, spreading an inch or two of beauty bark or some such thing, believing they've done their mulch duty. Oh, but it's so mulch more.

Stout herself recommended an 8-inch thickness of mulch, and beauty bark, which has often been dyed and treated and is of little nutritive value, probably would have made her scoff. She recommended freely available, natural material such as hay, straw, leaves... as she described it, "any vegetable matter that rots." That whopping 8 inches makes a big difference. Stout claimed that the seeds in hay didn't stand a chance, as the thick layers prevented them from germinating.

Before I read Stout's book, I'd been experimenting around with mulch myself. I tried a very thin layer of hay from a freebie bale, and all of the seeds sprouted, turning my front garden into a scraggly hayfield! I've been off hay as a mulch ever since (probably unfairly), and while I now always lay down at least 4-6 inches of mulch rather than the ideal 8, I can attest to the virtues of a thick mulch layer. 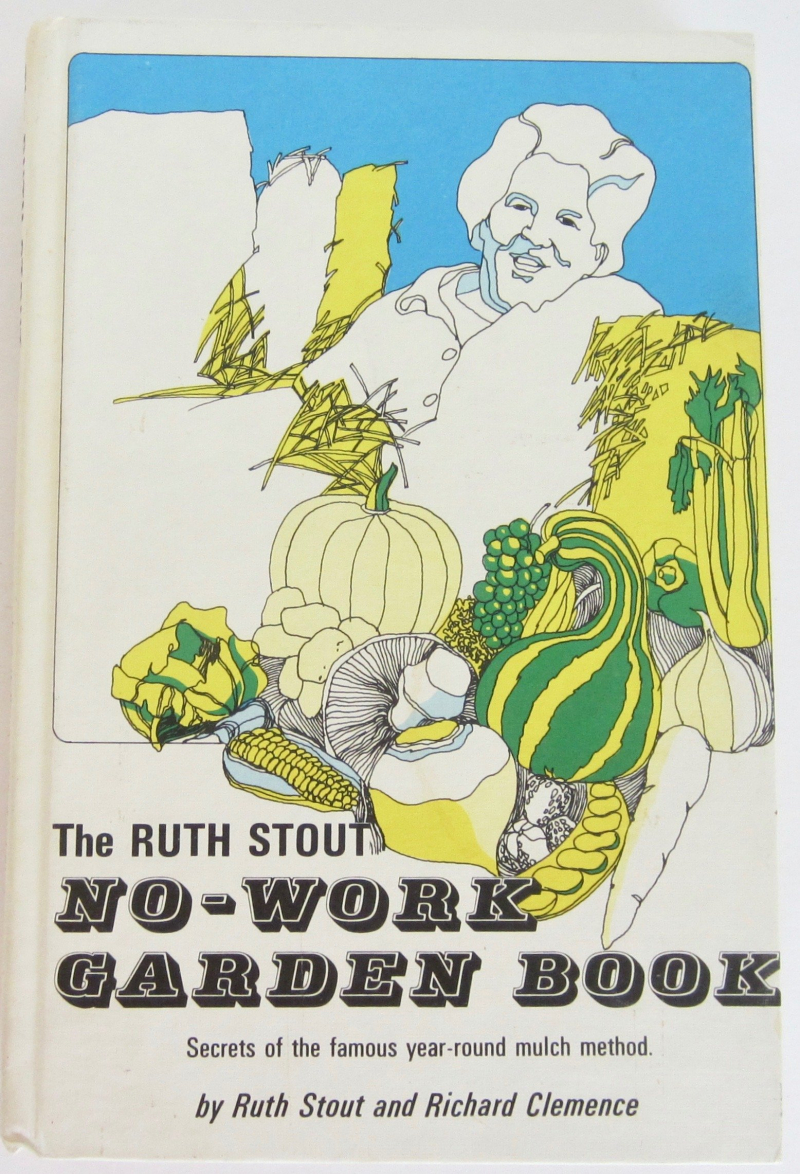 One of the best uses of mulch in my experience is in converting an area of turf grass to nice gardening soil. I use what some people now call the "sheet-mulch method," which is basically a decomposable barrier layer, such as an old wool carpet or cardboard boxes, underneath a thick mulch. I've done this three different times at three different homes over the past nearly twenty years, and the result is always amazing. I can't stress this enough. It's an affirmation of the natural decomposition cycle, proof that nature knows best.

Here's how you do it:

Again, this works so well I can't for the life of me figure out why gardeners still opt to either a) till the soil so deep that you're burying the grass under upended dirt or 2) strip off the turf layer and then place a weed-choking layer of black plastic or cloth over the dirt instead. I suppose if you can't stand to wait just one season, the sheet-mulch method isn't for you, but if you can't plan ahead at least that long, then I have to wonder why gardening is of interest at all. Gardening is all about planning ahead. 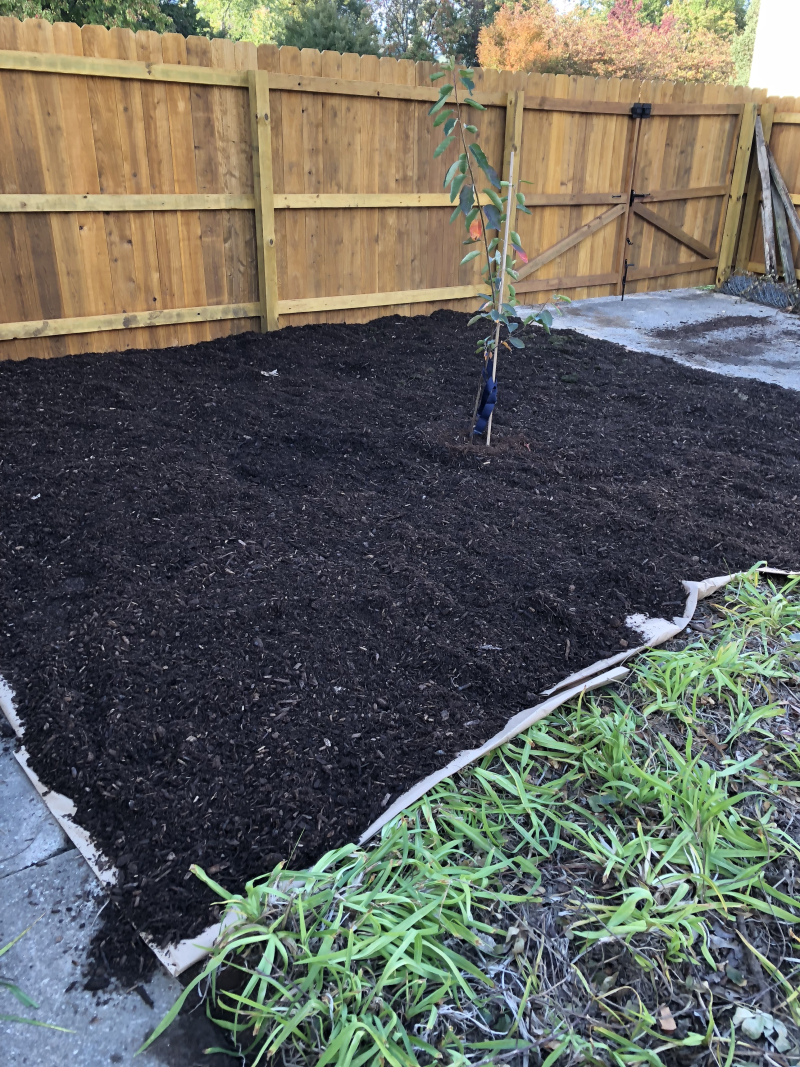 Our first batch of sheet mulch at Dragon Flower Farm.

I've even had otherwise reliable sources such as a prominent conservation group recommend a combination of glyphosate and black plastic to me in order to convert turf, and this just boggles my mind. That method is a lot harder, less environmentally friendly, and in my opinion, it means you're back to square one when you lift the black plastic and find a nutrient-deficient bed of stripped-off, hardpan clay or what-have-you underneath. With the sheet-mulch method, you're turning the undesirable grass into decomposing green matter that feeds the dirt you will later plant with something more desirable.

Now let's talk about weeds. If you follow my instructions above, weeds will not be a problem. I promise! We only had to mildly weed in the spring after sheet-mulching all fall and winter, and once we fill in the space with plants, I bet the weed meter will drop to near zero. Many of the plants that found our non-turf earth weren't weeds at all but desirable volunteer natives: a sycamore tree, a ground cover of violets, milkweed vine, virginia creeper, a lovely flowering spurge, and sensitive ferns. These plants provide exponentially better food and shelter for pollinators than ornamental exotics, so the fact that the sheet-mulched ground provided an encouraging foundation for them is a great sign.

Here's how the back forty looked mid-mulch, with only a portion of the left side covered. 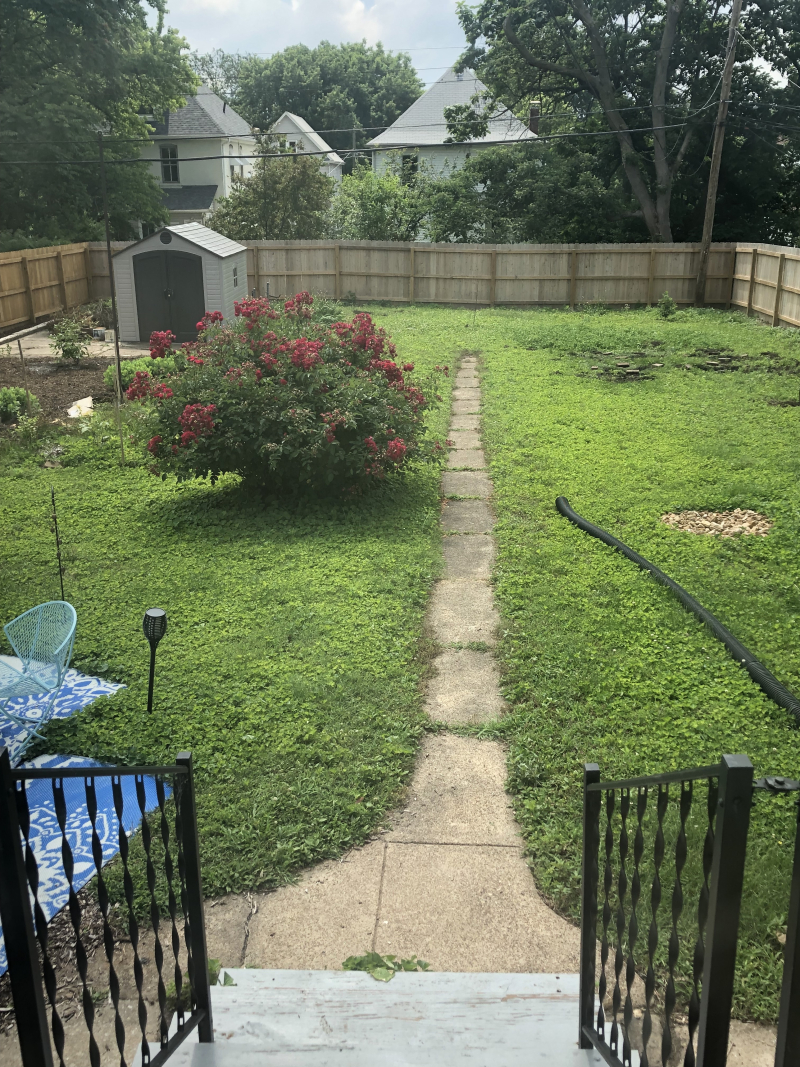 And here's where we are now, the 'almost after' picture. We'll get that final strip... soon. The greenery you see growing through the mulch is Viola sororia, or common blue violet, a Missouri native beloved by butterflies. It's also edible! 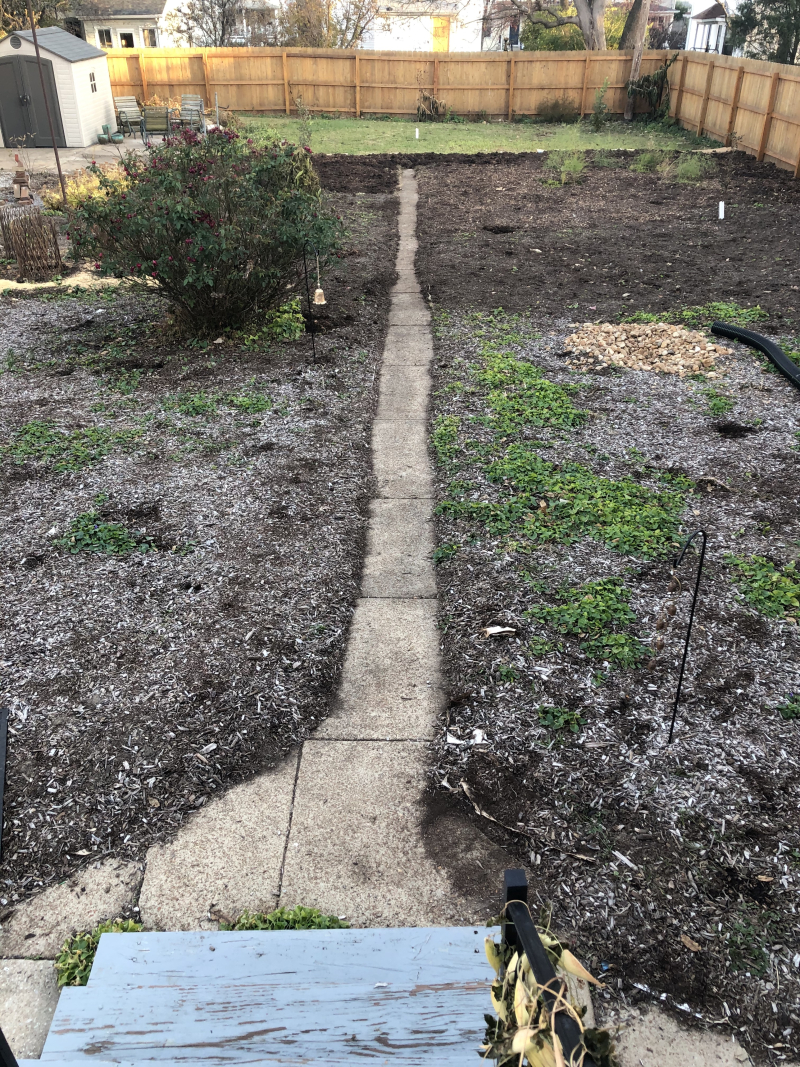 In the Pacific Northwest, where I lived for 15 years, it's common for homeowners to opt to go lawn-free. Here in the Midwest, not so much. I think the case against grass has already been thoroughly made by others, but if you've read this far even though you're clinging to your lawn, maybe you should just try googling, "Why should I get rid of my lawn" and take a trip down that delightful rabbit hole.

It's been a lifetime since Ruth Stout wrote her wonderful book, and while you can still get a copy, and you should - as it's a great read - there's been some exciting discoveries about dirt since then. Soil is on a lot of people's lips these days - yes, sometimes literally. I'm slowly making my way through a surprisingly dense, but not thick, paperback by Toby Hemenway, Gaia's Garden: A Guide to Home-Scale Permaculture. The no-nonsense Midwesterner in me had to look past the Gaia bit in order to give it a try, and I'm glad I did. While Hemenway is way more (seemingly intentionally) provocative on the subject of native plants than need be, like me, he picks up on the way our language has maligned "dirt" in the opening to his chapter on soil. (Maybe we're two minds who think alike, or maybe it's just ridiculously obvious that dirt's been treated like dirt for too long.) His treatise on soil blew my mind as a symphonic description of what exactly is happening after you place that layer of cardboard and mulch. I leave you with this excerpt:

The soil organisms in a properly tended garden will furnish almost all the fertilizer that plants need. As the life in the soil eats, excretes, reproduces, and dies, it works an almost alchemical change on organic matter and minerals in the ground. Through soil organisms, nutrients are broken down, consumed, transformed, rebuilt into body parts and energy-containing molecules, and broken down once more. And during these many-vectored flows of matter, a small surplus of nutrients constantly trickles to the plants. Just as bankers and merger specialists make their fortunes by skimming money from the colossal flows of commerce, so too do plants derive their sustenance by absorbing the surplus nutrients that whirl out of soil organisms' life cycles. Fertility comes from flow. A more vigorous soil life heaves more nutrients into the flux for plants to divert, releasing a surplus of fertility during the cycle from raw material to living body to waste and back again. Here, as in so much of the ecological garden, the process, the activity, the relationship, is paramount. Healthy soil and plants are created not by the simple presence of nutrients and soil life, but by the briskness and depth of their flows and interconnections. Savvy gardeners know this and will do all they can to feed the life of the soil. (72-73)

What's the dirt on your dirt? Share in the comments below.

This post is not sponsored, and we received nothing in return for our references to any of the named products.