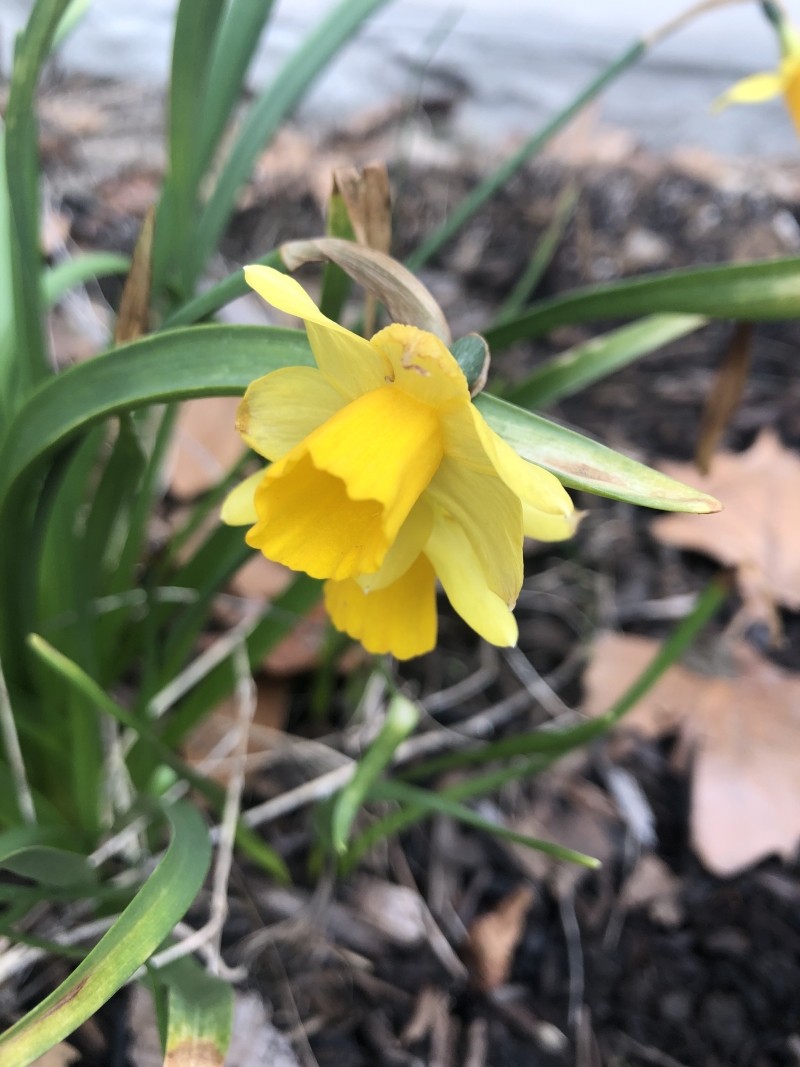 Our first daffodil of the season pops up in a shady corner near the HVAC unit.

The flora is waking up here at Dragon Flower Farm after a long sleep. I wish I could say we're waking up from a long sleep, too, but the truth is we're merely shifting from hard-work-inside to hard-work-outside. It's the same with the fauna. As I mentioned in the post on bird baths, our feeders were super active all winter. In addition to the usual flocks of house sparrows, house finches, and European starlings, we experienced frequent visits from cardinals, dark-eyed juncos, woodpeckers, and even the white-throated sparrow, a treat to watch for its two-footed, back-and-forth dig move in the dirt under our feeders. Like the birds, we're flush with motivation to make the most of springtime; while we marvel at the awakening garden, several projects are keeping us busy during this shelter-in-place.

Daffodils are a traditional harbinger of spring in St. Louis, where they explode in profusion beginning in mid-March. We're still discovering new ones popping up after a few years' recovery from the denuding the property underwent before a developer listed it for sale in 2016-17. As with a lot of the other plants we've kept, they seem much more robust now that we've rehabilitated the damaged landscape by removing invasives and turf grass and adding sheet-mulch to replenish the soil.

A word about ornamental bulbs: They're vastly overused, especially considering how little they give back to the living things around us. Unlike the native plants we're focusing on at Dragon Flower Farm, they are not sources of nectar, pollen, or food for most pollinators and insects, so they're essentially living statues in the garden. Still, from a permaculture perspective, they can serve a purpose, and for us that's to discourage critters from gnawing down our tender seedlings and transplants. We have a tough time keeping the rabbits from decimating our fruit bushes and trees, so we're moving the bulbs to encircle anything we don't want the rabbits to eat. This is working so far; rabbits find ornamental bulbs distasteful. 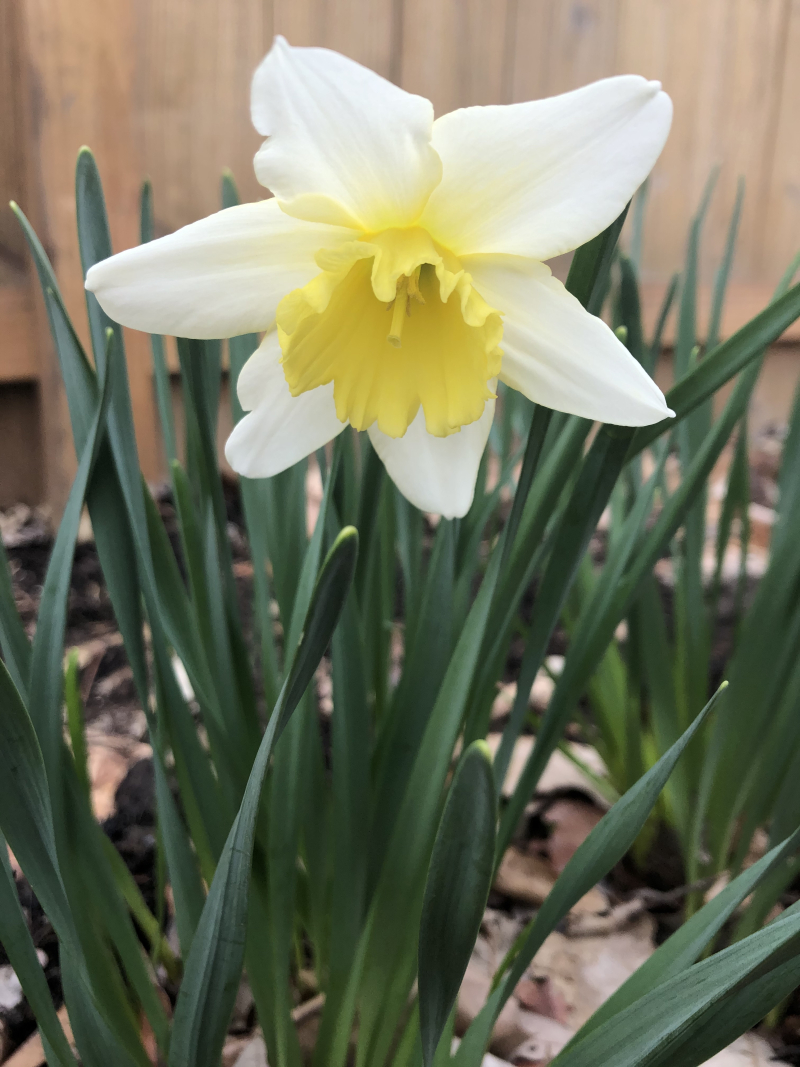 The one's making an appearance for the first time in three years.

Speaking of rabbits gnawing on tender young woody fruit bark... we recently dug a moat around our blueberries. This is not actually meant to keep the rabbits away but to keep water around the blueberries. It's an experiment and part of our ongoing self-education in permaculture principles. I got the idea from watching the entire playlist put out by Midwest Permaculture. In a few of the videos, you'll see a moat around a tomato patch, and there's also an ongoing series of presentations on the importance of retaining water through rain gardens, ditches, and water-loving plants.

Hopefully, this will help reduce the amount of water we need to extract from the county's water supply. I also sowed chervil and lavender around the blueberries - both companion plants that should help create a small guild of supportive interconnections. Still, Anthony and I have to laugh at ourselves. In my best Ron White voice, I turned to him during this process and deadpanned, "I'm spending a beautiful Saturday digging a moat in my backyard, and I don't really know why." 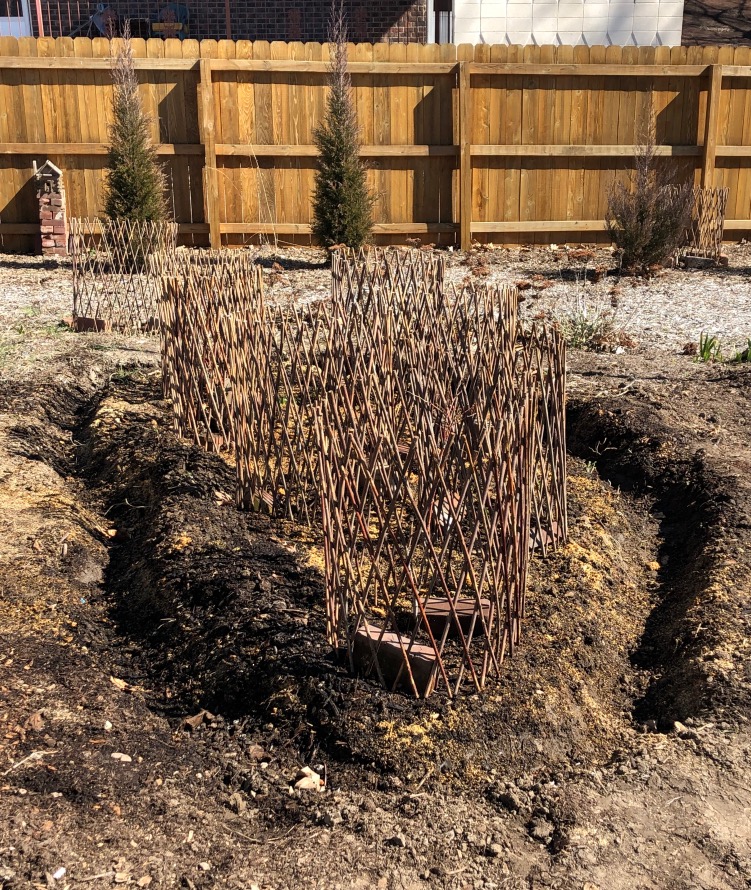 Yep, it's a moat. Around the blueberries.

While we certainly want more water in some areas, we actually have a bit of a water problem in others, mainly our basement. You might remember our French drain from a couple of years ago; well, it hasn't at all solved the problem. Our next least-expensive option was to replace the old, easily-clogged gutters on our house. We did just that in early spring, also taking the opportunity to rig up a rain barrel system, which my brother recently scored for us from his vacating neighbor. Both barrels have pretty much been entirely full since installation, which just goes to show you how much water runs off your property all the time - in our case down toward the damaged, urbanized River Des Peres and out to the Mississippi. 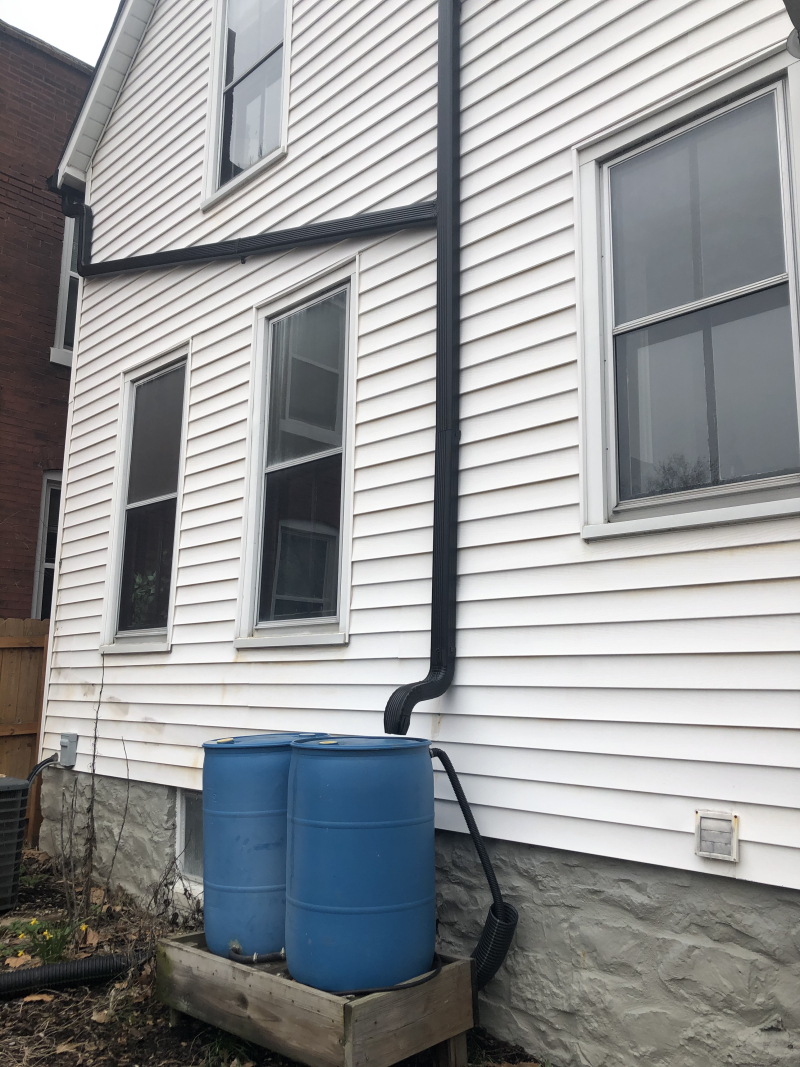 Who knew rain barrels could be so beautiful?

The next thing on our list water-wise is to bury that flex pipe, which isn't very nice to look at. I'd like to have it drain into another rain garden area, joined by the pre-existing French drain pipe that already lets out there. The entire landscape slopes down toward the south, so I'm thinking about a serpentine path that would slow the runoff. We'll see.

A wide variety of sources - from the Missouri Department of Conservation to Wild Ones to the Audubon Society to our native plant hero Doug Tallamy - all recommend delaying your spring cleanup as long as possible. So we left the leaf litter, spent vines, and dried-out perennial stalks all winter and are only tackling it in necessary spots right now. The reason? A great many flora depend on that plant material, whether it's red bats sheltering in dead leaves or insect larva needing a first meal. Besides, decaying plant matter is basically free, organic fertilizer. When we do remove it, like we did around the sedums lining our front walk, we do so gently and repurpose it nearby as mulch, as shown below. 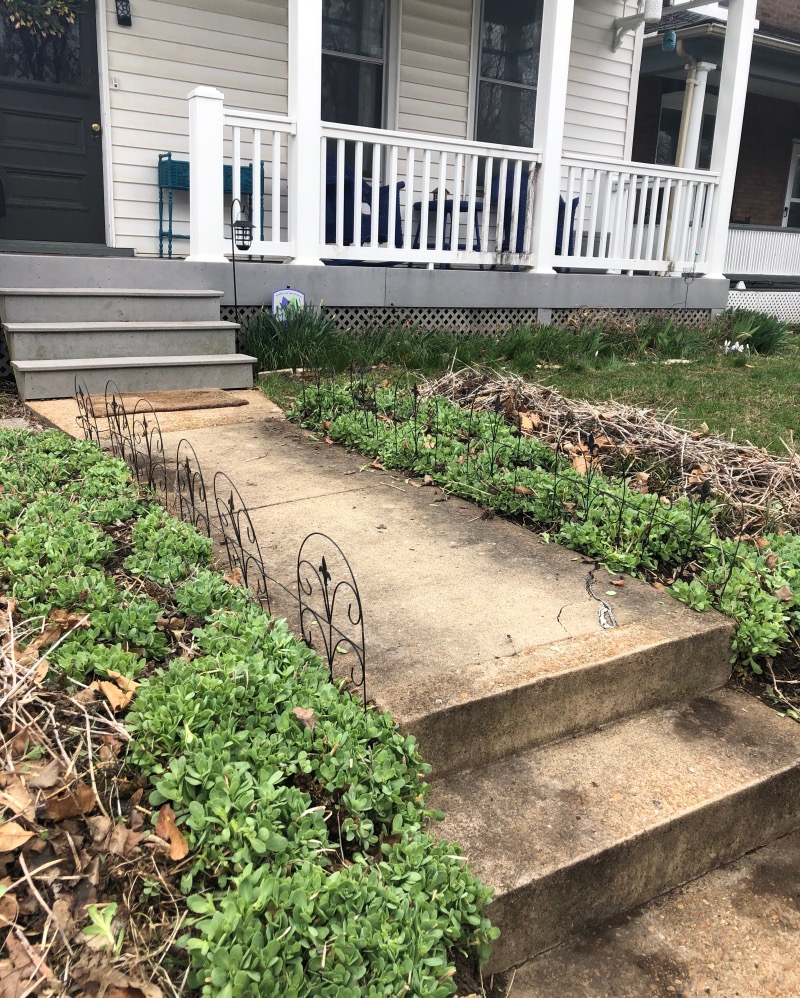 The daffodils aren't the only plants trumpeting spring. Our lilac will bloom out in the next few weeks; alas, the blooms only show themselves for a short time. We hope to harvest as much as we can to dry in bunches, and maybe we'll also have the time to make some lilac syrups, infusions, and other concoctions. It's a terrifically useful flower. 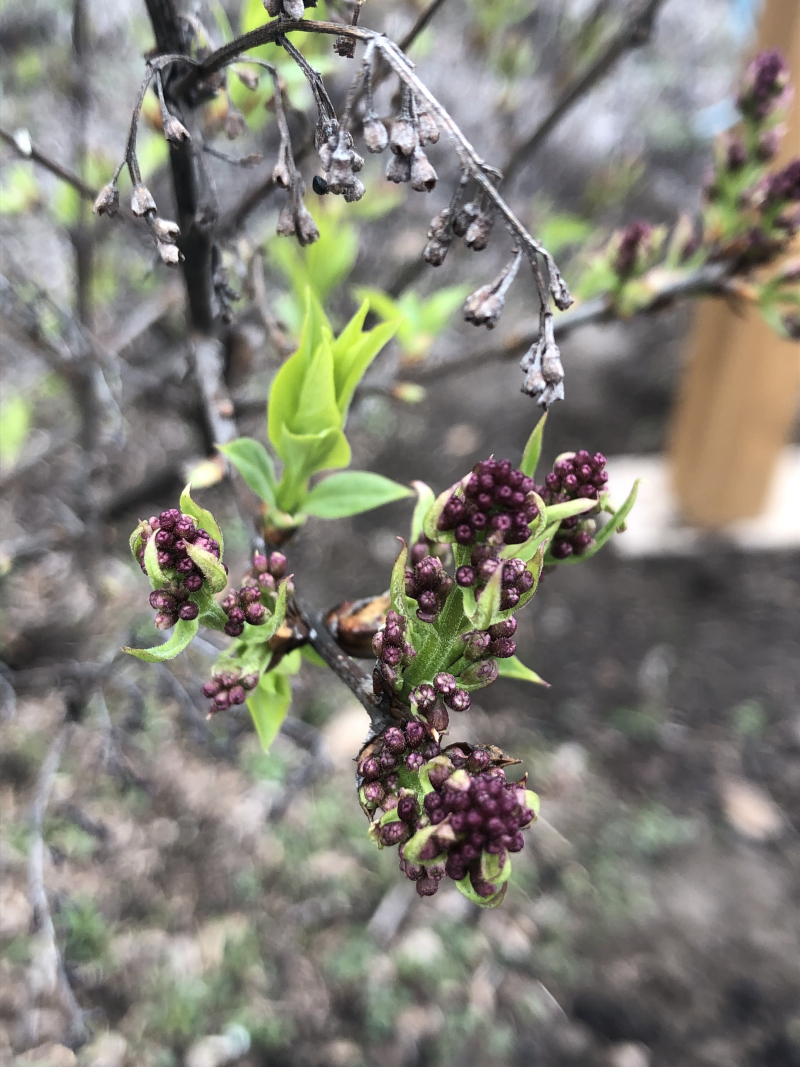 The daffodils and lilacs do point out a flaw in most suburban landscape design. When we moved in, our garden had been designed in the all-too-common mainstream method, which meant exotic ornamentals and invasive plants. Only the volunteers were true natives - the sensitive ferns and violets - and the violets had to be mown, as they were interspersed with lawn. This meant everything bloomed in spring, like one big flower detonation followed by nothing else. Pretty disappointing, in my opinion. I see this in a lot of Midwestern yards, unfortunately. So the spring here is incredible - there's no doubt about it - but the rest of the year could use more bloom.

Last week I talked about what it's like to begin to feel settled enough in a place to plan for the long haul. One of the most thrilling sights this spring is to see the thriving serviceberry (Amalanchier arborea) budding out. We put it in the ground in the fall of 2018 in our first wave of native plantings. 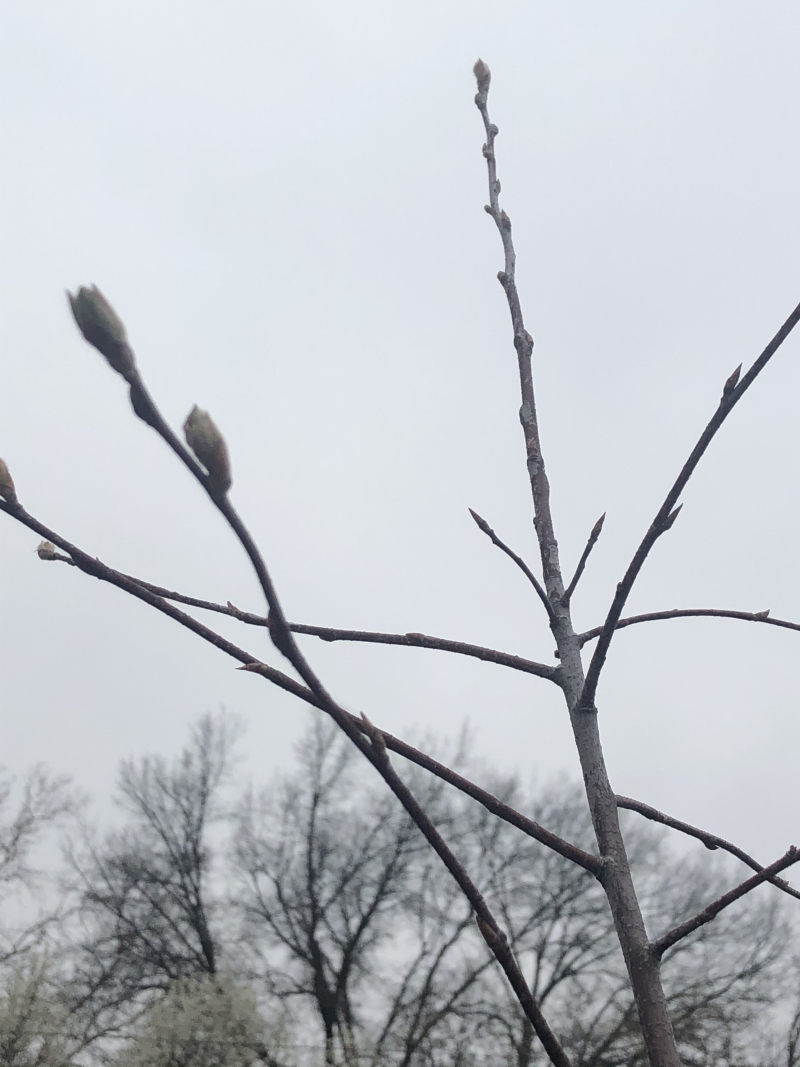 The Importance of Staying Put