The Care and Feeding of Your Skillet
After a Lifetime of Frequent Moves, the Importance of Staying Put

The Skillet Feeding You! How to Cook with a Cast Iron Skillet 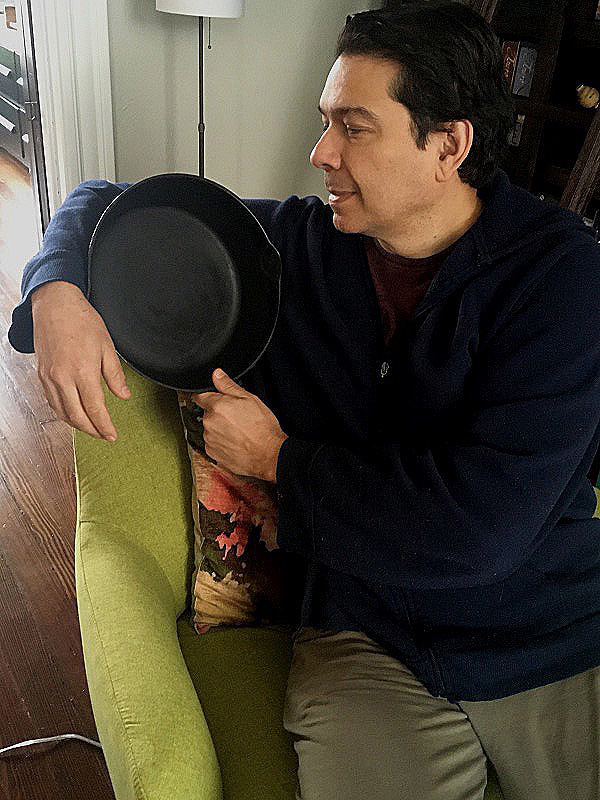 Note: This is part three in a three-part series devoted to cast iron skillets.

If you've read the previous two blog posts in this series (here and here), your pan is well-seasoned, and you know how to care for it. Before you start using it, the first thing you need to do is a bit weird, and it sounds like something out of a fantasy novel, but you need to get to know your pan. Remember, listen to your pan more than you speak.

Cast iron skillets have personalities (no, I don't know what their D&D stats would be1). Some heat up very fast, some more slowly. Some need a lot of oil regularly; some can get by on the oil in your foods. All cast iron pans heat up unevenly. Once they are hot, they give off a nice, even heat that lasts for some time, but as they are heating, you can hold your hand above the pan and feel temperature differentials.

When we first started cooking with our cast iron skillet, it seemed like food was always sticking to it, no matter how well we greased it. After doing some research, the problem became obvious. We were treating our skillet like a Teflon-coated pan. We would put it on the heat, toss in some oil, fat, or grease, and start cooking. As I mentioned above, cast iron skillets heat up slowly. And they need to be hot in order to not have food stick to them. We needed to adjust our cooking process to give the skillet a few minutes to heat up. Generally, I heat up the skillet about one notch on the heat dial above what I intend to cook food at. For example, if I am cooking a hamburger and will cook it at a "5" on the stove dial, I will set the dial to "6" for a few minutes, and then turn it down to 5 when the pan is hot. Then I will add the cooking fats and finally, the hamburger.

Next, you will need to get metal cooking utensils to use with your cast iron. First of all, you can't hurt your pan with a metal utensil like you can a coated pan. And secondly, you will want that metal-on-metal ability to get the pan cleaned of all food. Finally, cast iron can get very hot, and the last thing you want is for a rubber or plastic cooking utensil to leave traces of themselves on your lovely pan. 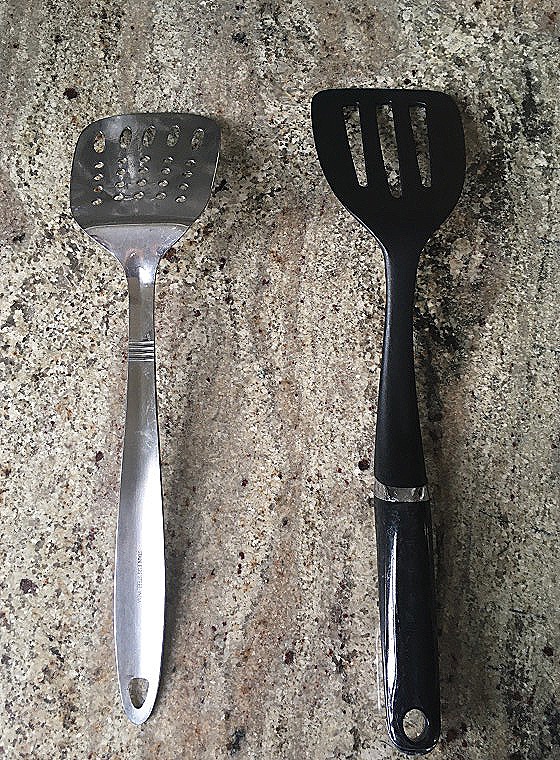 Although it has been mentioned a number of times, it bears mentioning again: cast iron skillets can get very hot. And they will get hot all the way up the handle. You need to remember that and use a good thick oven mitt when handling your cast iron while cooking with it. Also, don't forget that it will be hot and it will stay hot for some time. Don't set it down on the counter to cool, or you will end up with a burnt spot on your counter. If you drop it into your stainless steel sink when it is hot be prepared to hear a loud bang as the hot pan hits and bends (temporarily) the cool sink bottom. A better option is to leave it on the stove on a cold burner to cool down for a 5-10 minutes, and then rinse it with water and clean it out. 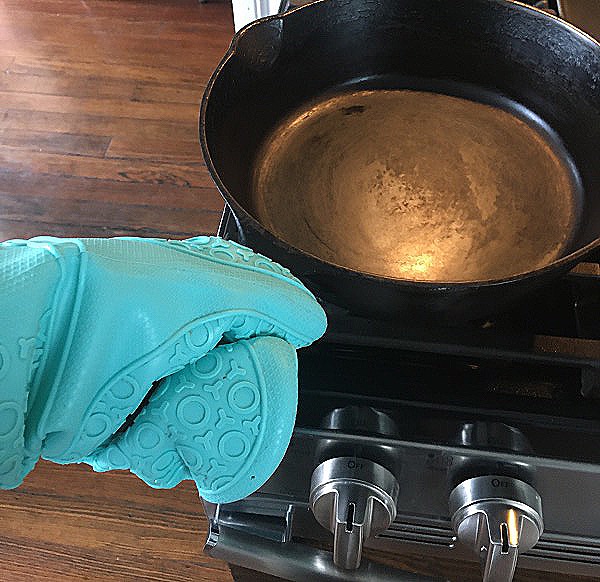 The final point I will make is that while I've been cooking with cast iron for about five years, I don't have a huge variety of personal experiences. I have yet to make brownies or sweet rolls or anything not savory in my cast iron. But the word on the street (the mean streets of the Internet that is) is that one should keep one set of cast iron for sweet cooking and another for savory. Just as your choice of oil for seasoning your pan can impart a small amount of taste to your foods, the theory is that the foods you cook will impart a small amount of taste to the pan and then to other foods you cook. If you have just cooked a savory dish, and you are cooking another savory dish, the taste will likely be so subtle that it will be unnoticeable. But, some people swear that if you cook a sweet dish and then a savory dish (or vice versa), the taste is distinct enough that it can be noticed. I plead ignorance on this one, but it does make some sense. I guess if you had a very sensitive palate, you might choose to have one set of pans seasoned in coconut oil for sweet cooking and another seasoned with a different oil for savory cooking.

With that, I conclude my three-part series on cooking with cast iron. As I learn more, I will put out updated posts. Also, as the Dragonflower Farm investigates other pre-fossil fuel-based technologies, I will post our experiences of those as well!

+1 to your AC if you are wielding it and have no shield. However, due to the nature of the weapon, it is ineffective against heavy armor, which causes a -2 to damage rolls.

The Skill That Goes into a Skillet

The Care and Feeding of Your Skillet

Our Best Antique Mall and Freebie Finds of the Year