Fire! In the Middle of One Apocalypse, We Get Another 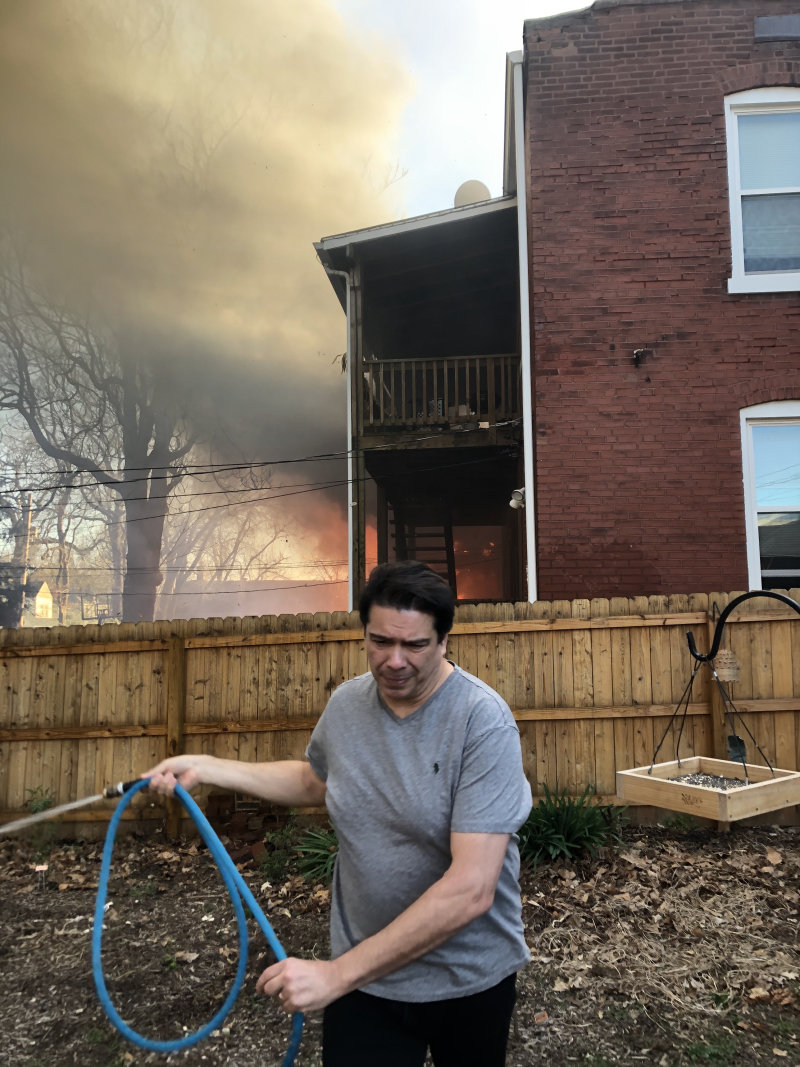 This is the point where Anthony realized wetting down our fence was no longer the move. We'd just been advised to vacate.

It's been three weeks since the fire, but it still smells like smoke at Dragon Flower Farm.

I was sitting on the couch with my cell phone, on hold with a service provider, listening to the recorded Muzak. I had already showered and changed into PJs. It was early Sunday evening, we'd spent the day working on the farm project, and Anthony was in the kitchen, cooking.

I smelled smoke and called out to Anthony about it, thinking it might be dinner. It was a nice day, though, and the windows were open, and suddenly, I heard people yelling. I also heard another sound: like a loud electrical burst. Then I noticed the smoke and got up to look out our back window. The neighbors next door often have bonfires out of a metal fire pit back there, and occasionally those fires have roared a bit too large for my comfort, especially since their pit sits on grass lawn. So I thought at first it was that. But then I noticed heat waves far too big to be caused by a fire pit. 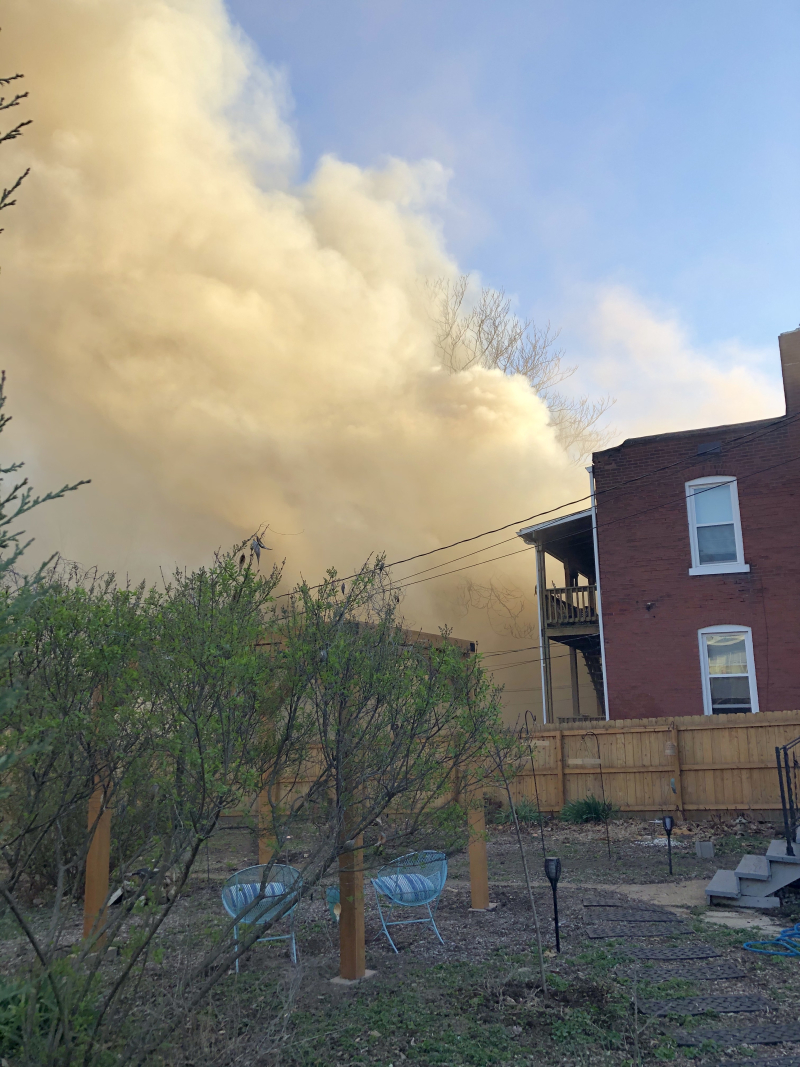 View from our backyard.

My heart pounding, I hung up on my still-on-hold call and tapped in 911. I gave Anthony the phone, as he was still in street clothes, and he walked over to get a closer look at the building where the fire was. I ran upstairs and changed out of my PJ bottoms into the first pair of pants I could find. I threw a jacket over my pajama top.

If you've ever experienced a panic situation, maybe you know what this is like. Some other part of your brain takes over, assessing and prioritizing. It told me I didn't have time to change the PJ top. But then the order of things gets fuzzy for me as I look back now. I remember my heart pounding, a bitter adrenaline taste in my mouth.

At one point I looked outside the upstairs window and saw a huge piece of burning building fly into a pile of leaves. I grabbed the fire extinguisher. My husband was there in the backyard, hosing down our fence. The burning piece in the pile of leaves, thankfully, had gone out. But the fire was engulfing the back side of the house one building over, way too close. If it caught our neighbor's wooden deck, we'd be next, as there's barely a shoulder's distance between our two buildings. Our house is wood frame.

Here's a video taken by our neighbors on the street behind us. You can see they had a better view of just how bad this thing was.

There was a moment when the fire roared and we realized there was nothing we could do to stop its spread. A sickening, helpless feeling came over me. I prayed for the fire trucks, with their lifesaving water hoses. Anthony had not been able to get through on 911. But he'd seen that several other witnesses also had cell phones and hoped that someone got through. Soon the first fire truck arrived, and let me tell you that is the strongest sense of relief I've ever experienced. 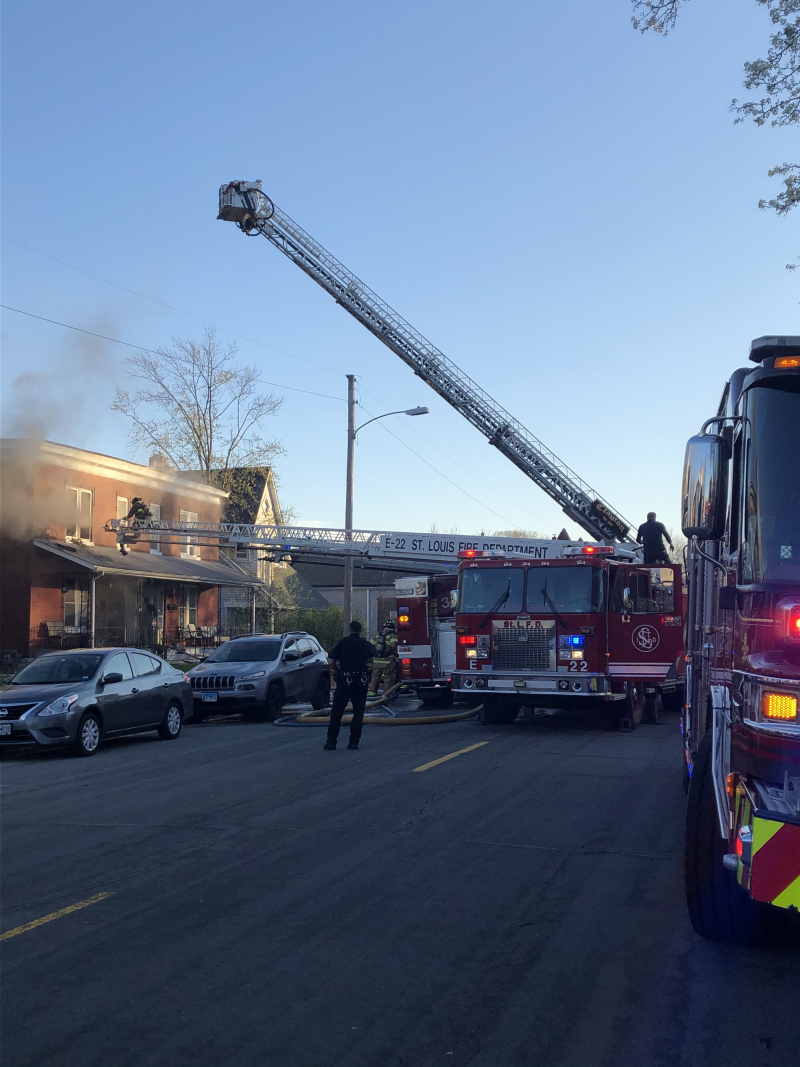 In the time before the fire trucks arrived, I felt helpless, as there was nothing I could do to save my home.

At some point I ran outside and told a police officer on the scene about the string of wooden decks in back, asking him if we needed to vacate. He said, "I would definitely do that, yes."

My lizard brain took over again, and I decided the only priorities were Anthony and Chaco, our cat. I told my husband we needed to leave, which I know was a hard moment for him, captured in the image at the top of this post. I'm surprised I had the presence of mind to snap that pic, but maybe my ecstasy of relief at the arrival of the fire engines had calmed me. Plus, I've always retained a bit of the journalist in me somewhere, so some part of my brain said this was a moment I wanted to get down. 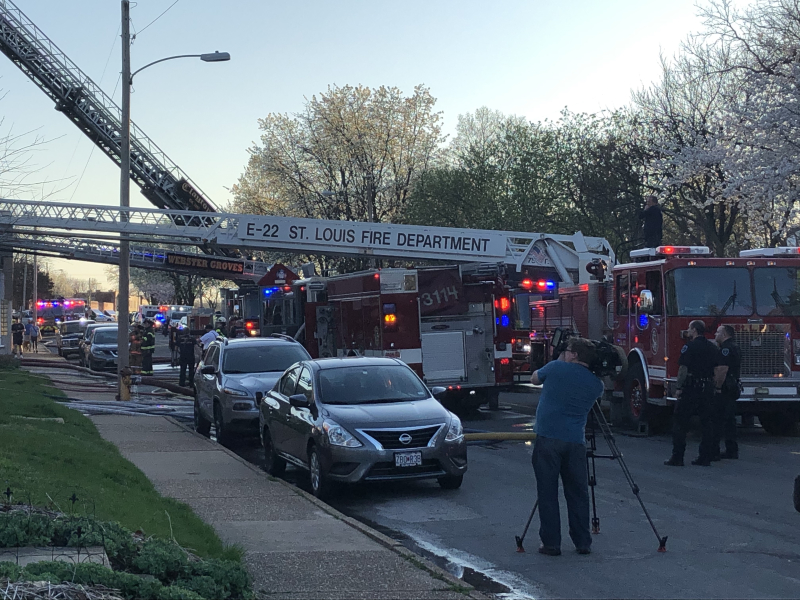 Fire departments from seven different municipalities responded to the alarm.

Getting Chaco meant grabbing my purse for my keys, as I realized we had not taken the time to get him a new cat carrier, and the last time we'd used his cloth one, he had successfully broken out of it at the vet. I would have to get him in the carrier and then into the car. By this time, the street was filled with fire engines from as many as seven neighboring municipalities, and the last thing we needed was for our skittish mini-cat to get lost in the fray.

It took some time to locate the cat carrier and then get him into it and into the car.

Luckily for us, we had the time. While that fire grew to an engulfing, raging size with alarming quickness, the fire departments were on scene and battling it before it could spread. Thanks to them, no one was hurt, and only one building was damaged. 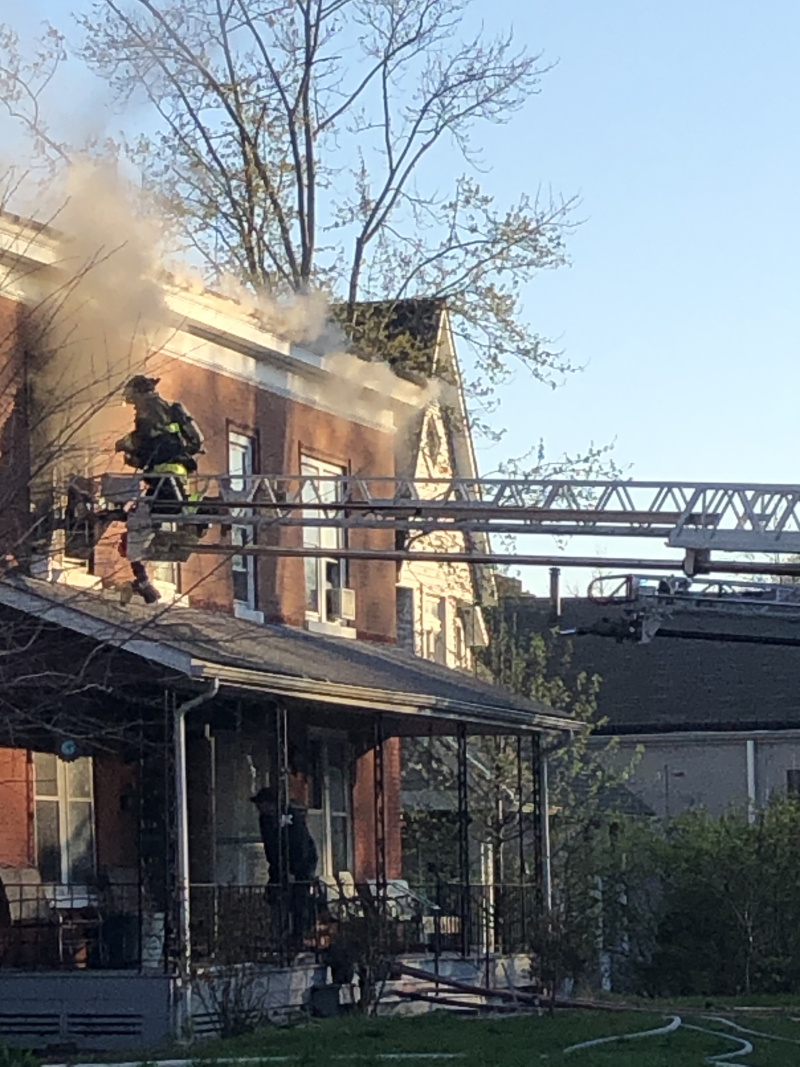 Everyone who lived in the four-family flat escaped unharmed, but the fire gutted their apartments, destroying everything they owned, only the brick structure remaining.

The fire blew out the windows in the building next door to us and melted the siding off the home on the other side. It blistered that wooden deck we worried would catch fire.

That was all just really too close.

Before the fire was extinguished, I worried about how we'd cope with losing both our home and business, since we work out of a home office. My anxiety was pushed even higher at the thought of having to continue to quarantine without a home to stay locked down within. My heart goes out to our neighbors, who've lost their homes during an already difficult time. We're glad to hear they received some emergency support from the Red Cross, and that all of them had a place in town they could go to stay.

In the middle of one apocalypse, they got another. After pandemic and then fire, what's left?

But it's always good to remind ourselves of how fortunate we are, and that goes for many of us in dealing with the pandemic. Anthony and I are very lucky we can continue to work through the quarantine, and are relieved that no one we know has suffered from COVID-19. We're also grateful to live in a place and time in which a formidable fire foe can rear its fearsome fury, and a legion of water warriors arrives to vanquish it... just... like... that. 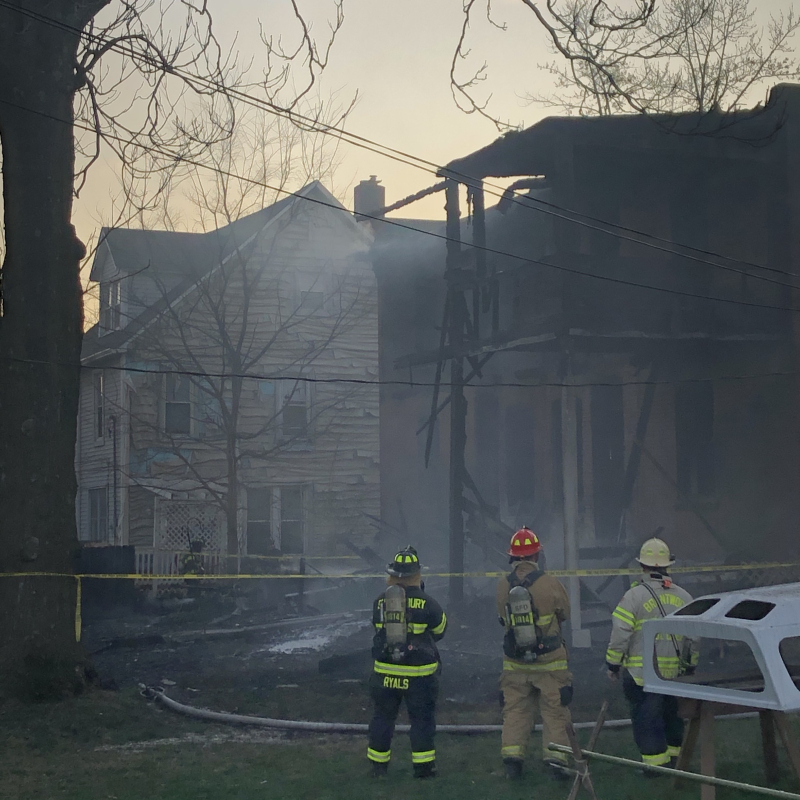 Our neighbors reported the fire was started by an accident with a barbecue grill. The enclosed porch on the back of the flat was reduced to char. Once the blaze was extinguished, firefighters pulled down what remained of the porch, just skeletal burnt debris. Here's how the back of the building looked the next morning. 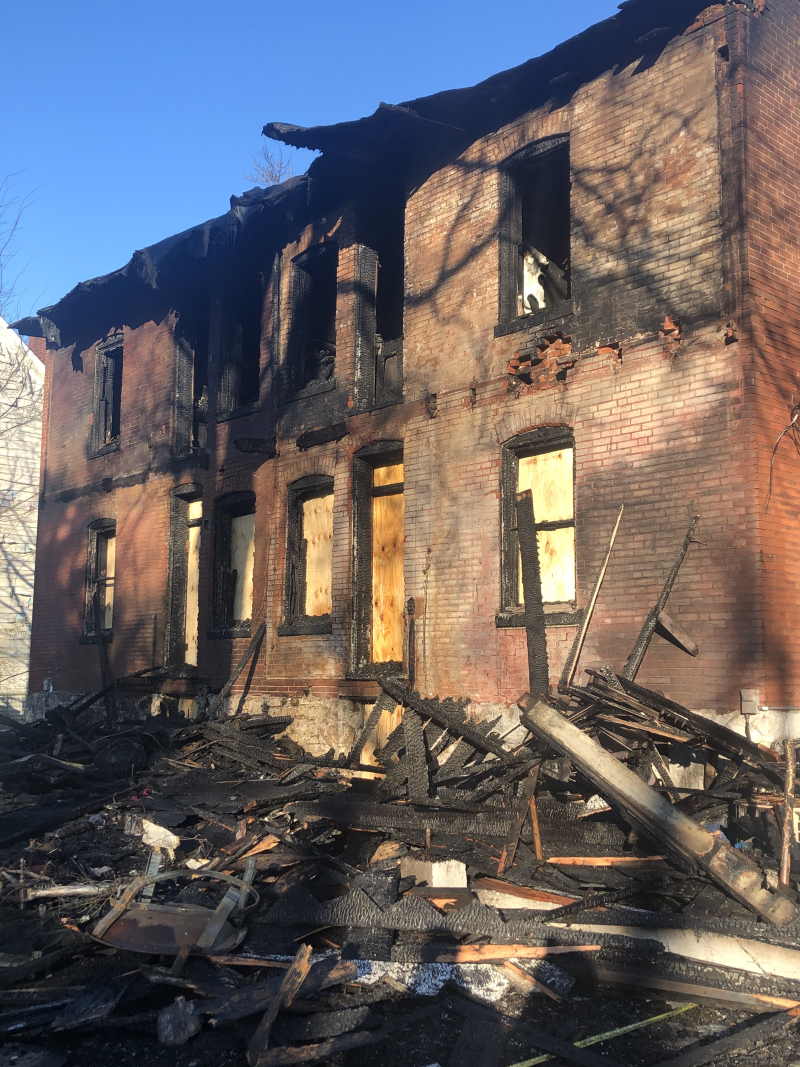 In addition to the prospect of having to rebuild our homes and livelihood if we'd lost it all in the fire, we also hated the idea of losing all that we've done at Dragon Flower Farm - the past three years' work to create something wonderful here we can both be proud of. We're grateful we haven't had to sacrifice that either.

Chaco, by the way, was unharmed. And he did break out of his carrier. At some point during the night, we looked over to see him perched on the dashboard of our car, taking in the whole scene. It was a surreal sight!

We learned through this experience that our disaster preparedness needs some tweaks. We've got a better cat carrier now, and it's in the coat closet within easy reach. We're also working on a "go bag" and other measures. 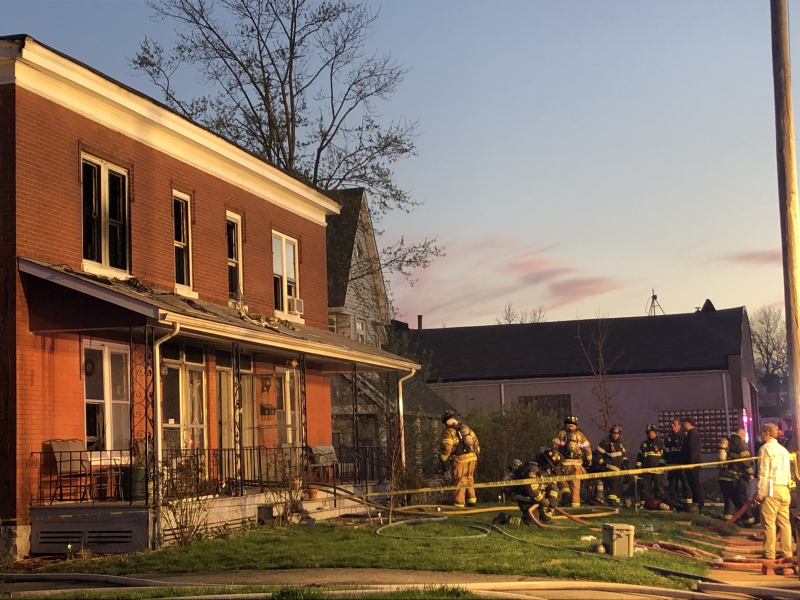 It's worth taking a moment to recognize the people who put themselves in danger in order to help others. It's quite a calling to be a firefighter. The rest of us could only stand on the sidelines - trying our best to maintain social distancing - and watch in awe as they did their swift, expert work to squelch the fire.

I know our local fire firefighters had actually been hoping to pass a measure this spring for increased funding for equipment, but the election has been delayed due to the shelter-in-place order. We reached out to the fire department to see if we could donate, and they suggested we give to The Backstoppers, so we have. Their mission is to provide:

Ongoing needed financial assistance and support to the spouses and dependent children of all police officers, firefighters and volunteer firefighters, and publicly-funded paramedics and EMTs in our coverage area who have lost their lives in the line of duty.

The flat's brick structure is still standing, and there's every indication they will eventually rebuild. But for now, we have this view over our pear tree. It's a reminder of how close we came to disaster. 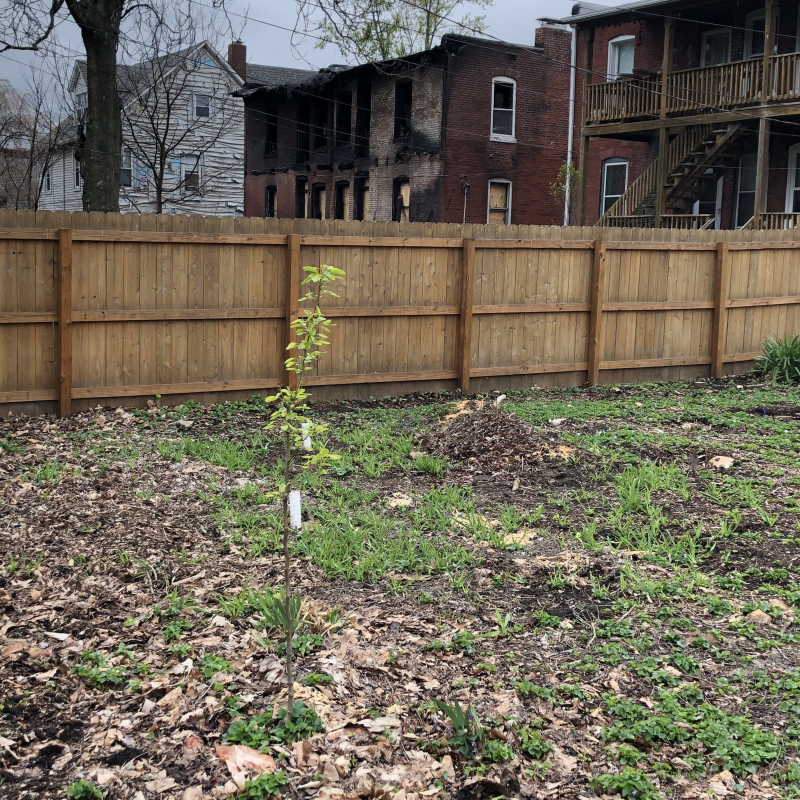 But hope springs eternal here at Dragon Flower Farm. We're counting our blessings this season and looking forward to summer, and all that comes after.

Note: The fire was covered in 40 South News, and a local filmmaker created a short documentary of the event: