Tell Your Friends - Sign Up for the Newsletter, Get a Free Ebook Boxed Set
Chaos Is a Garden 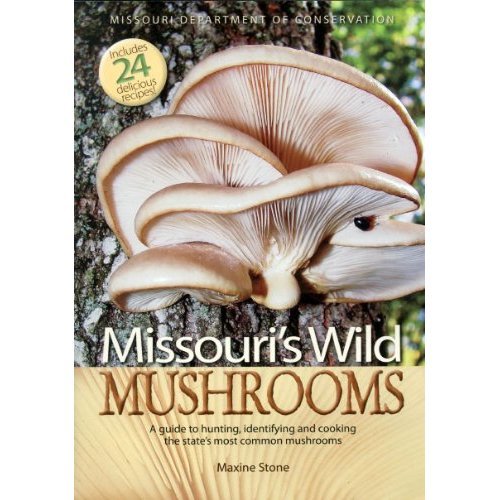 Back in January, I'd asked mystery author and wildlife biologist Ellen King Rice to help me ID some of the mushrooms I'd found growing in the woods, as well as here at Dragon Flower Farm. As you might recall, we ended up turning the post into a series of tips on how to ID mushrooms, which is something no one should take casually, at least if you're looking to eat them.

One of Ellen's tips was to get a good field guide. This spring, I came across the perfect field guide for my mushroom madness: Missouri's Wild Mushrooms, by fellow St. Louisan Maxine Stone. The book is a great reference guide for ID-ing mushrooms, and it includes 24 recipes for using common edible mushrooms found in Missouri - delicious-sounding dishes like barley and blewit salad and candy cap sauce.

Missouri's Wild Mushrooms is published by the Missouri Department of Conservation (MDC), an agency I can't say enough good things about. For one, they do amazing things to help propagate the use of native plants. Through their annual seedling program, I just scored 24 seedlings for a buck a piece - yes, that's only USD 24 for 24 small trees and shrubs - including blackberries, pawpaw, and white fringe tree. They also host a wide range of fun, educational events to teach the public about everything from how to tap maples for syrup to the best spots to catch a glimpse of bald eagles in winter. This is in addition to their ongoing mission to conserve and preserve Missouri's natural world. 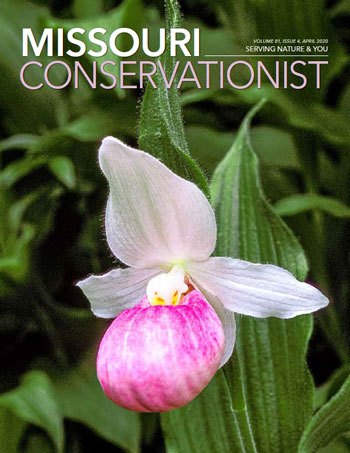 MDC puts out an award-winning magazine called Missouri Conservationist - I read mine cover-to-cover every month - and they also publish a series of books, of which Missouri's Wild Mushrooms is just one. You can order MDC books in-person at conservation and nature centers or online; check out their full offering at the MDC Nature Shop. I use their Nature Notes journal to keep track of our progress at Dragon Flower Farm.

Also on wildlife biologist Ellen King Rice's advice, I've downloaded the iNaturalist app, though again, its value is limited. Now armed with that and mushroom expert Maxine Stone's excellent wild mushroom field guide, I will revisit the mushrooms in the previous post and see if I can't get some closer IDs. 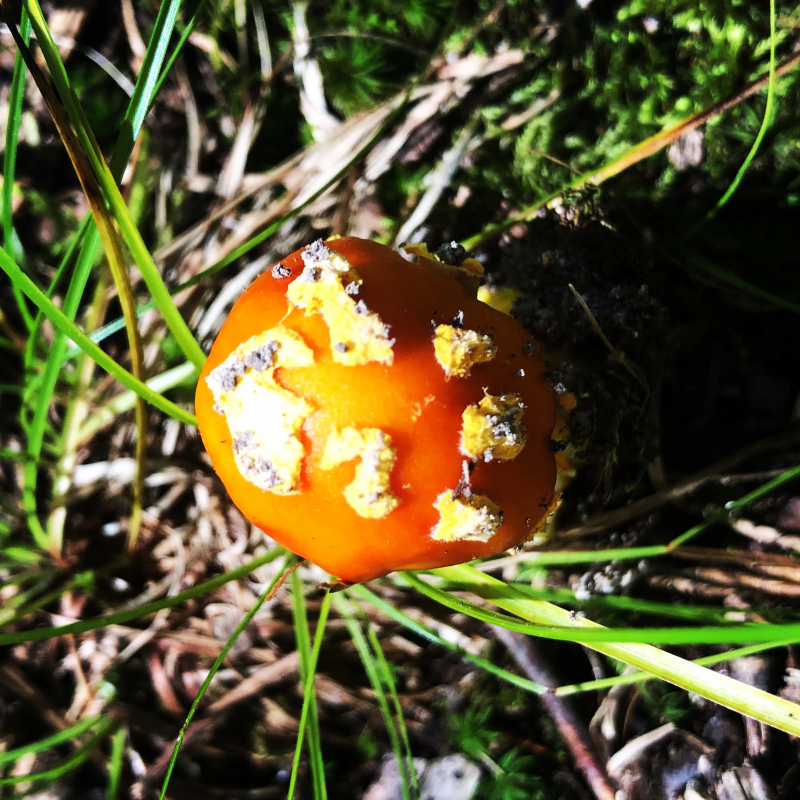 Photo taken in 2019 at a trail near the World Bird Sanctuary.

The first one is an iconic Amanita, most likely muscaria, although iNaturalist says it's Amanita cesarea. Most of the photos I'm finding of cesareas don't have the white flecks of fungus on top, though, so I'm going with Amanita muscaria, or fly agaric. According to the MDC, Amanitas account for 90 percent of mushroom-related deaths. In Missouri's Wild Mushrooms, Stone lists the Amanita bisporigera, or "destroying angel," as the top poisonous mushroom to avoid in Missouri. "Ingesting one cap of a destroying angel can kill a man," says the MDC. 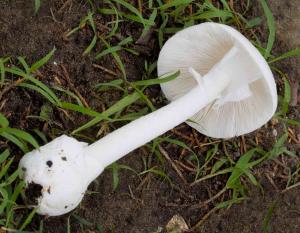 Yeah, so fine to look at and even touch - according to Stone, you can't get poisoned unless you eat them - but I wouldn't even think of tasting anything that looked remotely like either of these - amanitas are a no go.

Stone says the "lookalike" mushrooms are where a lot of people can go wrong, too. She shows which ones to watch out for in particular. She also cautions against eating mushrooms you find in your yard or the wild first without consulting a mushroom expert. Where to find one of those? Here in Missouri, she suggests the Missouri Mycological Society. But lots of states have mushroom societies; here's a full list. 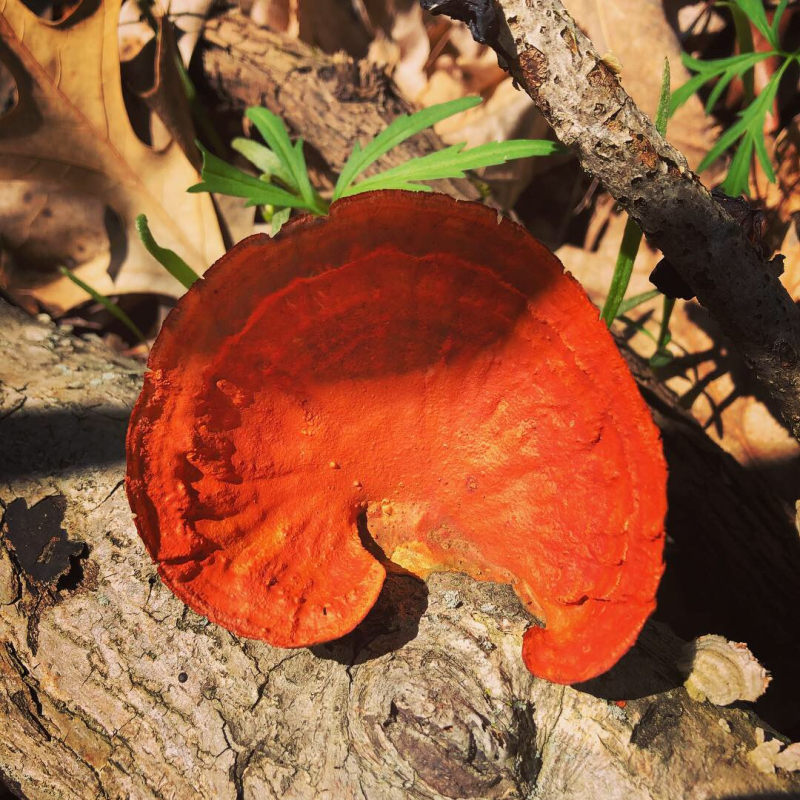 Photo taken in 2019 near the Meramec River.

This specimen looks very much like a cinnabar polypore, Pycnoporus cinnabarinus, judging by the guidelines in Stone's book. It has no lookalikes - which aids in identification. Though beautiful, the cinnabar polypore is not considered edible.

If I had a sample, rather than just this image, I could make a spore print to lock in the ID. Stone walks you through the process in her book, and it's fairly simple - basically setting the cap gills-down on a piece of white paper and waiting anywhere from two to 24 hours for the spores to drop. Plus, as Stone points out, "Your spore print may be a beautiful piece of art and even frameable." I can't wait for some mushrooms to pop up so I can try this! 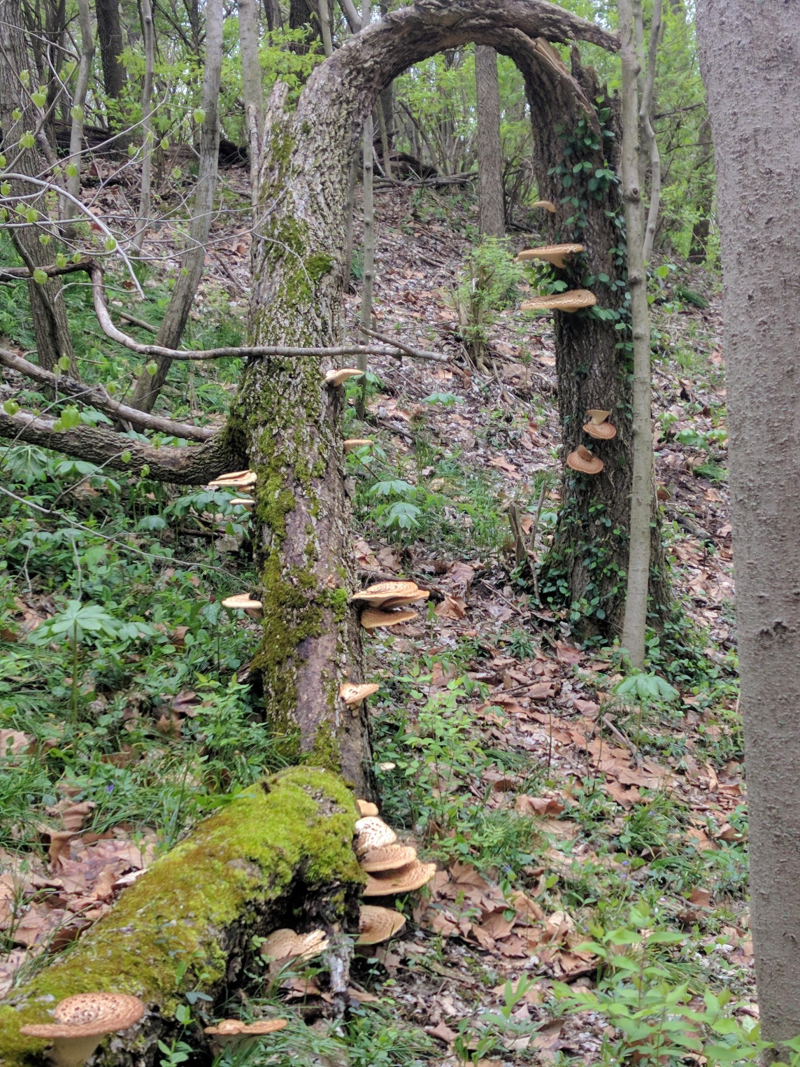 Also taken 2019, near the Meramec River.

Note all 'fruiting bodies' appearing aboveground are technically mushrooms; whereas, fungi grow mainly underground, so what you see in these two photos really are mushrooms. As pictured above, they grew in a large group, or condo, as I called it. Here's a closeup. 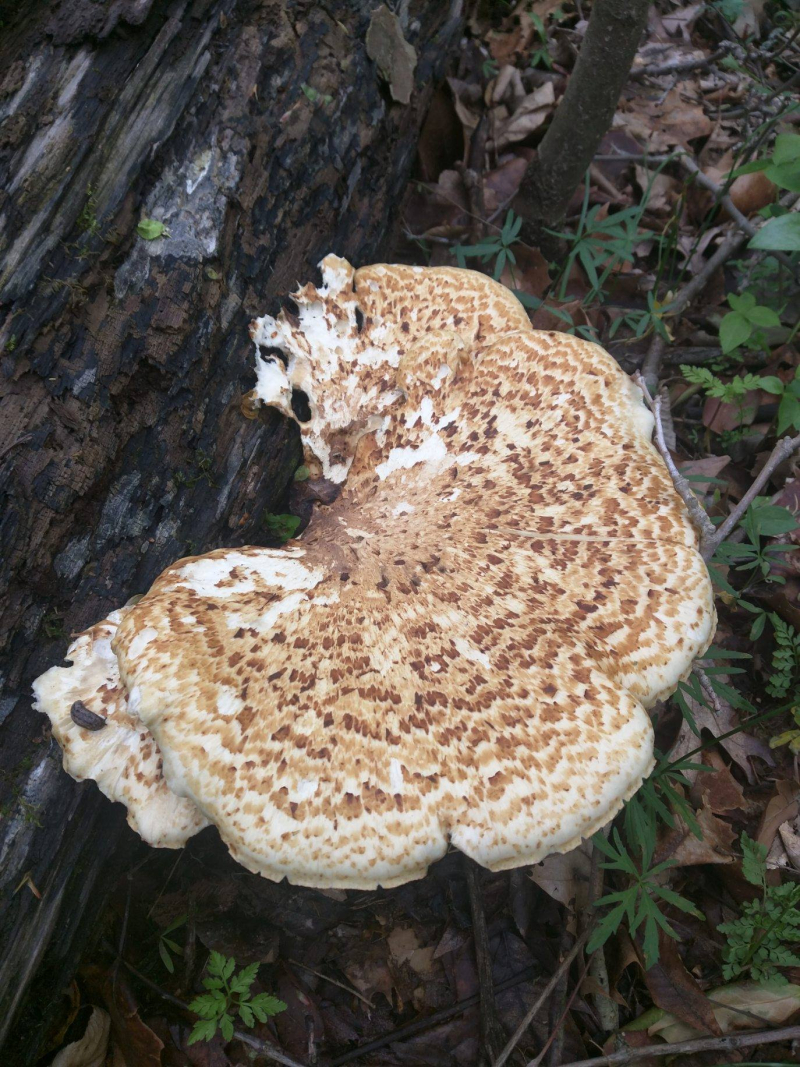 Very likely this is dryad's saddle.

Like the cinnabar polypore, this is another 'pored bracket' type of mushroom. These can grow both singly or in layered groups. This one looks very much like the dryad's saddle, Polyporous squamosus, which is edible. But again, I'll take a spore sample first before cooking this up if I encounter it again. Another good tip from Maxine Stone is to keep a little bit of any mushroom you eat in case you need it for ID purposes in the event that someone reacts to it. Even if they're safe to eat, some people are more sensitive than others.

This last series of mushrooms - which all grew here at Dragon Flower Farm - are obviously the gilled cap-type, or Agarics. 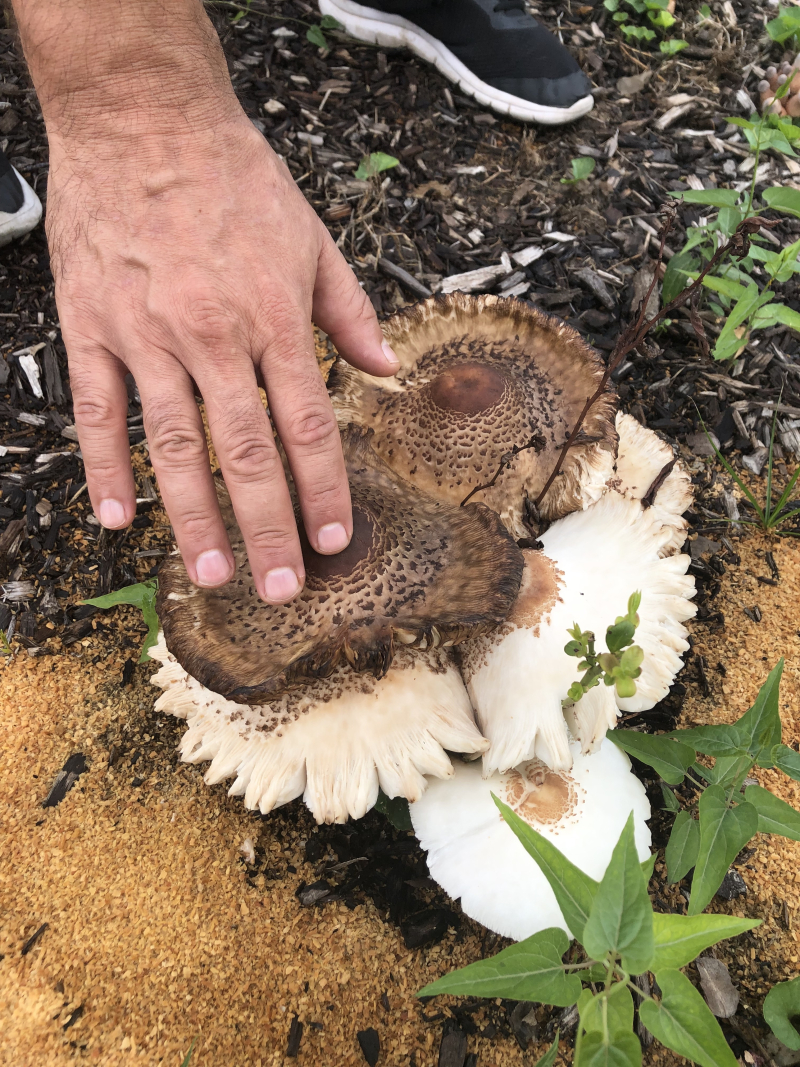 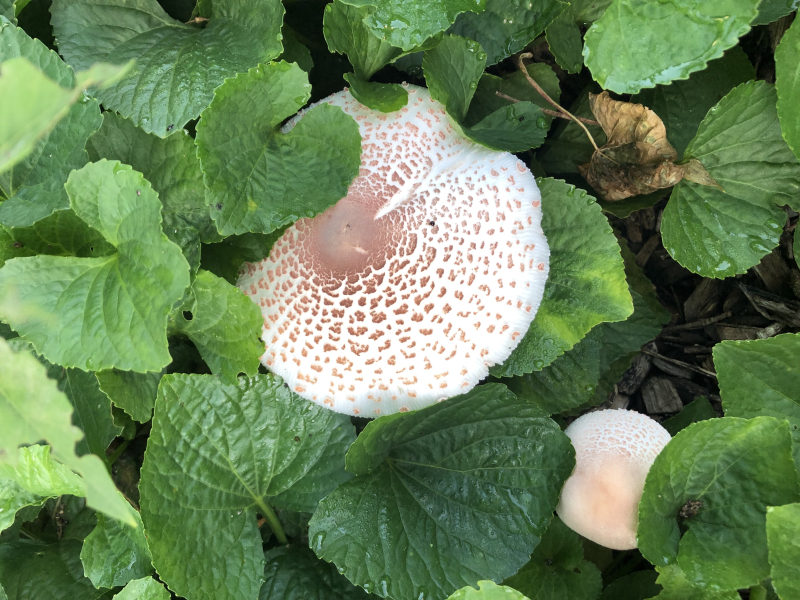 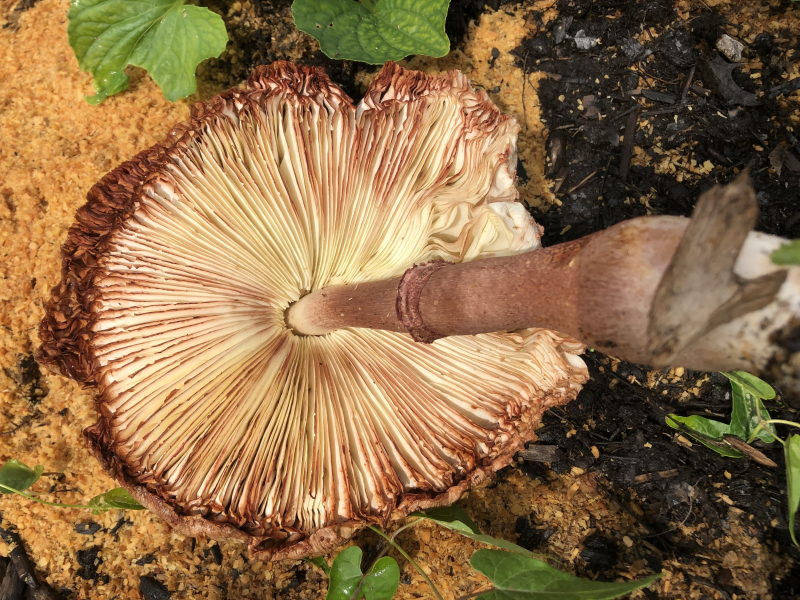 None of the gilled cap mushrooms in Stone's guide look like these, unfortunately. The closest is the edible meadow mushroom, but the cap isn't a good match. iNaturalist says it's in the genus 'Leucoagaricus,' of which there are 90 species. The one native to North America, Leucoagaricus americanus, is edible. Again, I'd have to have a sample and take a spore print to be sure, but that's a likely guess. Maybe I'll also reach out to Maxine Stone and ask... 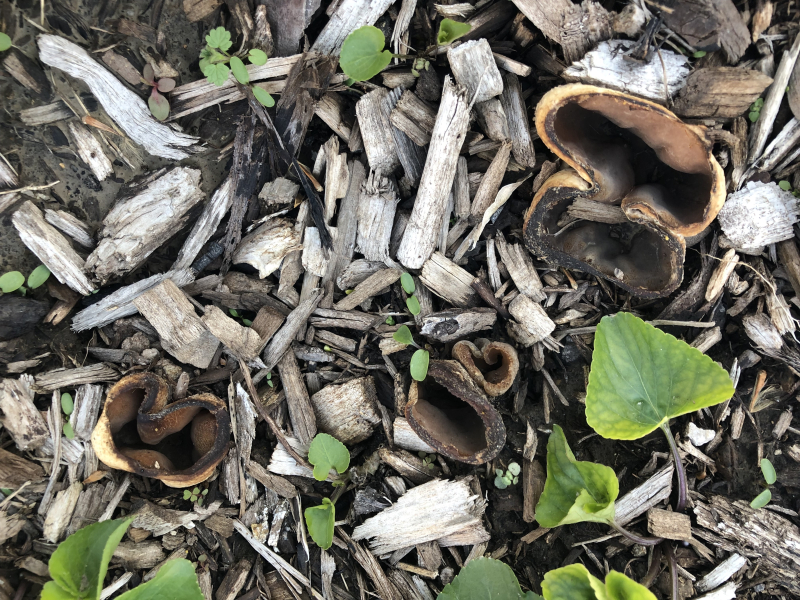 Lastly are the delightful cup and bird's nest fungi, which Ellen ID'd easily in our previous mushroom post. None of these are edible, but Stone agrees they're a treat to find, and I bet if you're on a mushroom hunt with the kiddos, this would be a popular one to ID. 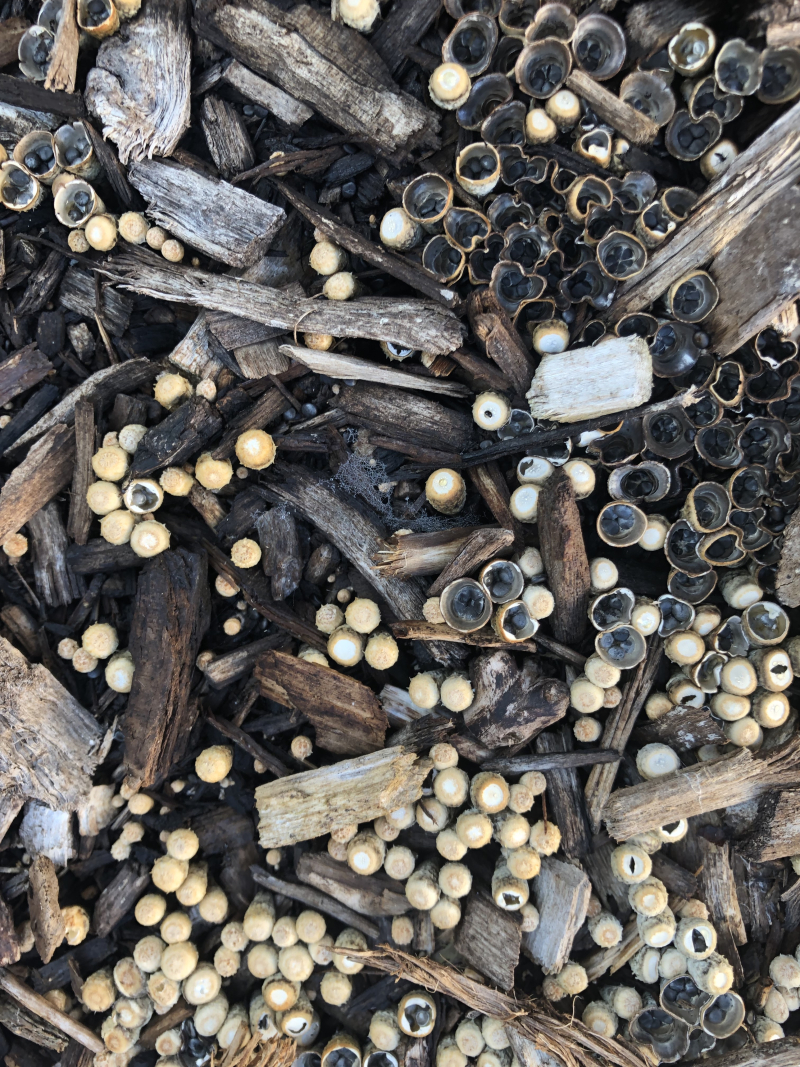 Thanks for sticking with me on this mushroom journey. I'm curious whether any of you are getting out into the woods these days. With the lockdowns now extended to state parks, preserves, and other natural areas, it's been tough for me to find a way. We've had a long spate of dry weather - one day the temperature soared to 88° already. But we're looking at a very rainy week ahead, so maybe we'll get the same mushroom-and-fungi extravaganza we got last year here at Dragon Flower. As Maxine Stone says, "Missouri is a great place to find all kinds of wild mushrooms." What's popping up out of the ground in your state? Tell us in the comments below.