Fire! In the Middle of One Apocalypse, We Get Another
What's Happening Now on the Farm, Quarantine Edition 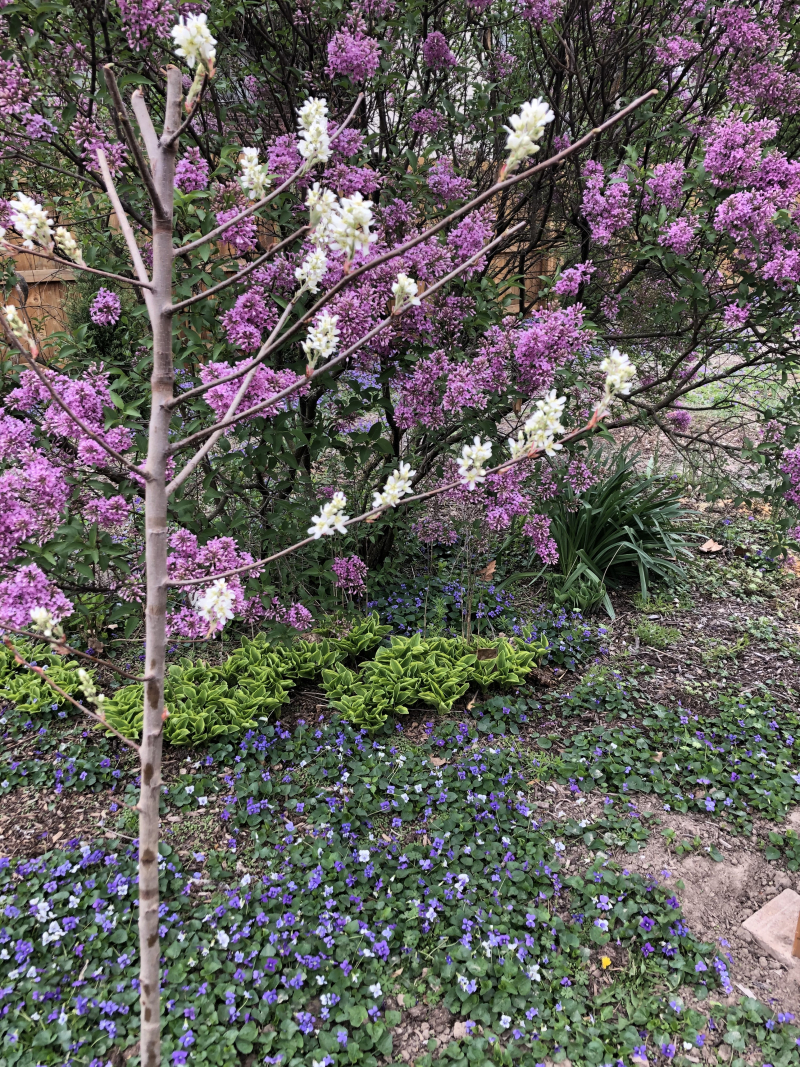 Ye olde farm yarde is exploding with blooms this spring, and the photo above is a good cross-section example. Here you see a native serviceberry in the foreground, with our vintage lilac behind, and a carpet of violets on the ground. Breaking up the floral hues is that smattering of electric-green hostas beneath the lilacs. Those will bloom later in summer, white flutes on tall green stalks. Here's a closeup of those gorgeous lilacs. Our neighbor next door says he gets strong whiffs of their intoxicating aroma clear up to his balcony. The garden area here is also an example of a permaculture technique: to cultivate a layered, diverse ecosystem. That means planting at all levels, starting at below-ground with root crops and heading gradually upward to the highest canopy. Here you see only the middle layers: ground cover (violets), slightly taller vegetation (hostas), woody shrubs (lilacs), and understory trees (serviceberry). But later, a nearby persimmon will fill in the taller tree canopy, at 60 feet or so, and the sycamore and shumard oak, also nearby, will make up the upper tree canopy, at 100 feet. We've also planted seeds for a root crop, carrots growing in dappled sunlight.

The violet ground cover, by the way, is a 100 percent freebie volunteer that began to flourish once we sheet-mulched over the turf grass. We like it much better than grass. 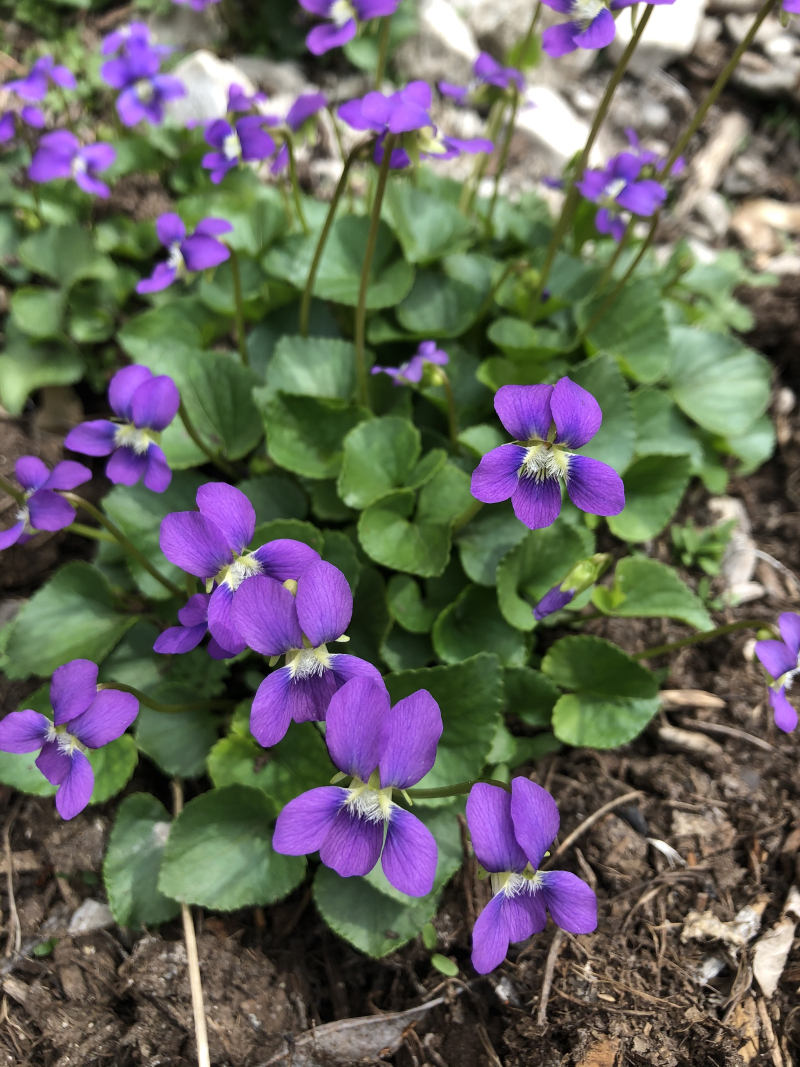 It's prettier than boring old turf and just as durable: You can trample all over the leaves and even the blossoms, and they just take it. Even if you do manage to flatten them down for a spell, they pop back up in no time. The other cool thing about this native midwestern ground cover is that it is the favored food plant of fritillary butterflies, according to the American Violet Society. The butterflies lay their eggs on the leaves, and when the larvae hatch, they eat the leaves.

This makes us feel even better about flipping the established practice that has most people ripping out violets, regarding them as "weeds," and spending time and money trying to grow a patch of grass. Instead, we smothered the grass and let the violets have at it. The violets are edible, too, both the flowers and leaves; we made a salad with them recently, and in an upcoming post we'll show off violets as a natural dye.

Speaking of our culture's strange habit of labeling perfectly good plants as "weeds," I want to introduce you to henbit dead nettle, also now in bloom at Dragon Flower Farm. 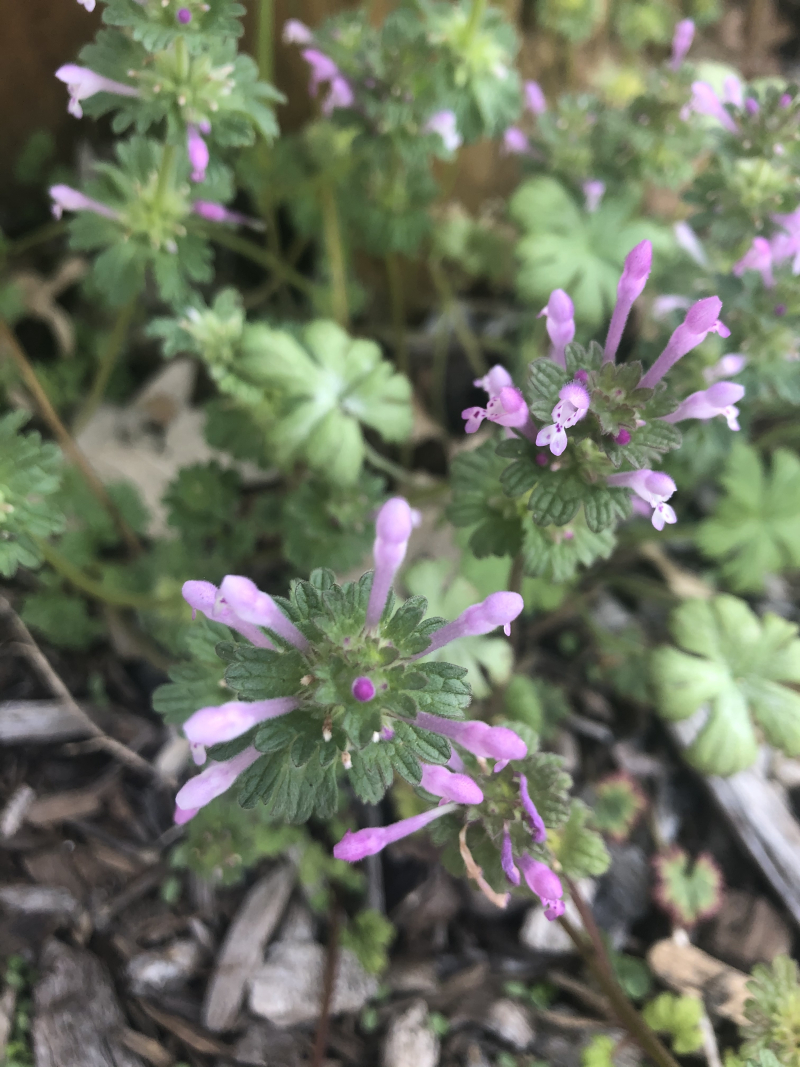 You've probably seen this dozens of times, as it's a prolific grower. But have you stopped to look at it closely? Those orchid-like blooms deserve appreciation. Henbit dead nettle is edible as well. I've snacked on a few while out in the garden, but I haven't had too many because the rabbits love them! This is actually a good thing, as they've distracted the rabbits from other plants in the garden I don't want them to eat. Henbit dead nettle is not native, but it's not invasive either, and it's useful for its edibility to both humans and animals.

I've shown you a lot of cool-hued flowers here, so let's move to the warmer side of the spectrum with some vivid red and yellow tulips. We didn't plant them, and this is the first time they've come up like this in the three years we've been here. Previously, we had one or two struggling red tulips. but now we've got all these. I bet they're thriving in part because we mulched around the tree we planted in the middle of them. 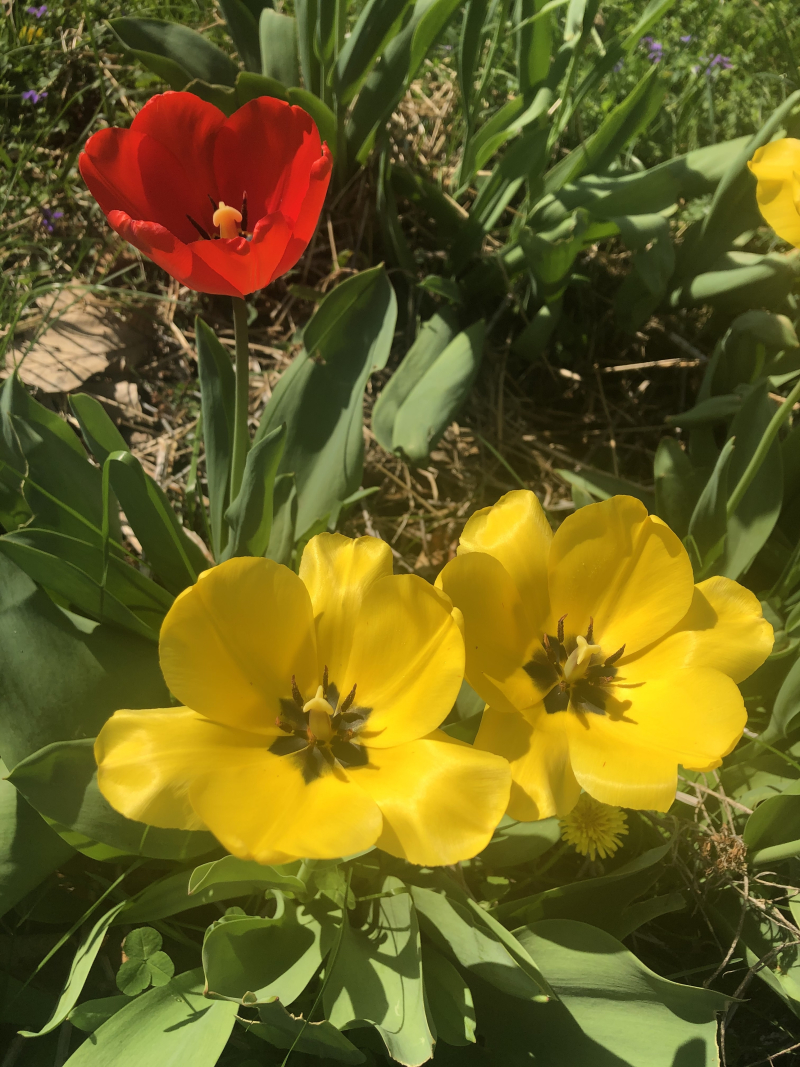 Now let's take a look at all the fruiting tree blooms. We put in a Rome beauty apple this spring, a pollinating companion to our existing Arkansas black apple. They're both semi-dwarf size, flanking one side of our orchard area. The Rome beauty budded out right after planting. 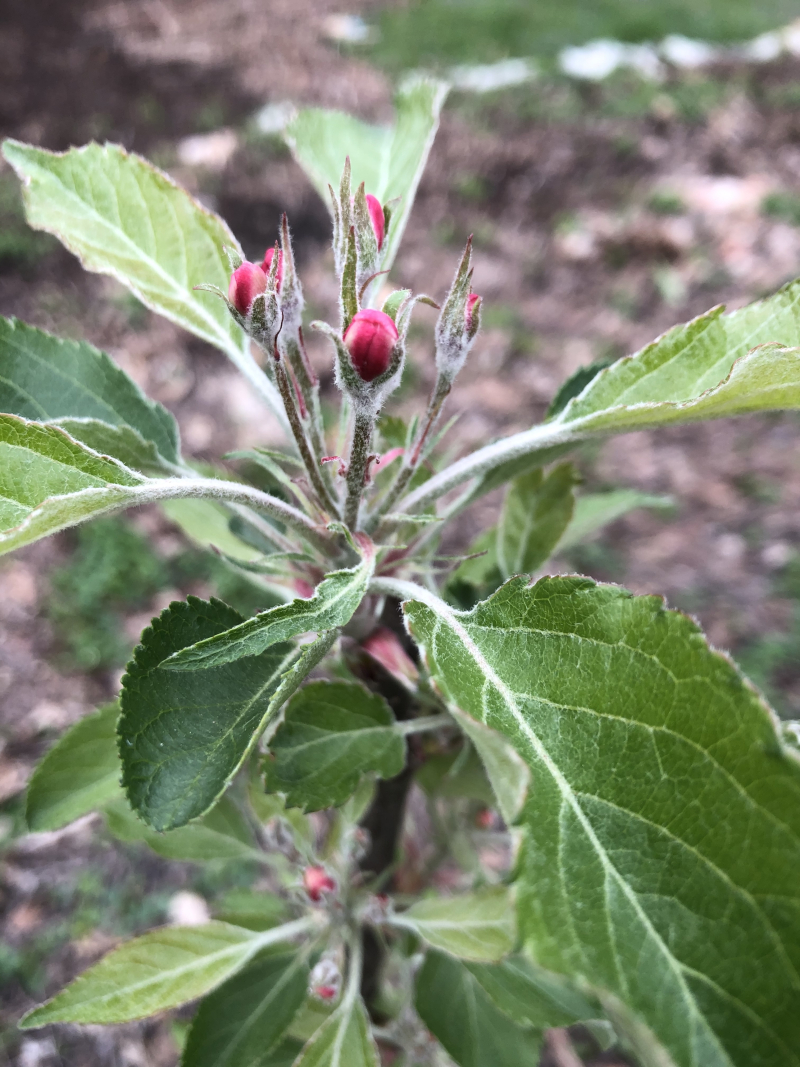 We also put in two Hansen's bush cherries, which bloomed after planting as well. I didn't even know cherries grew on bushes, so this was an exciting find because we can diversify our fruit crop without needing space for a whole tree. 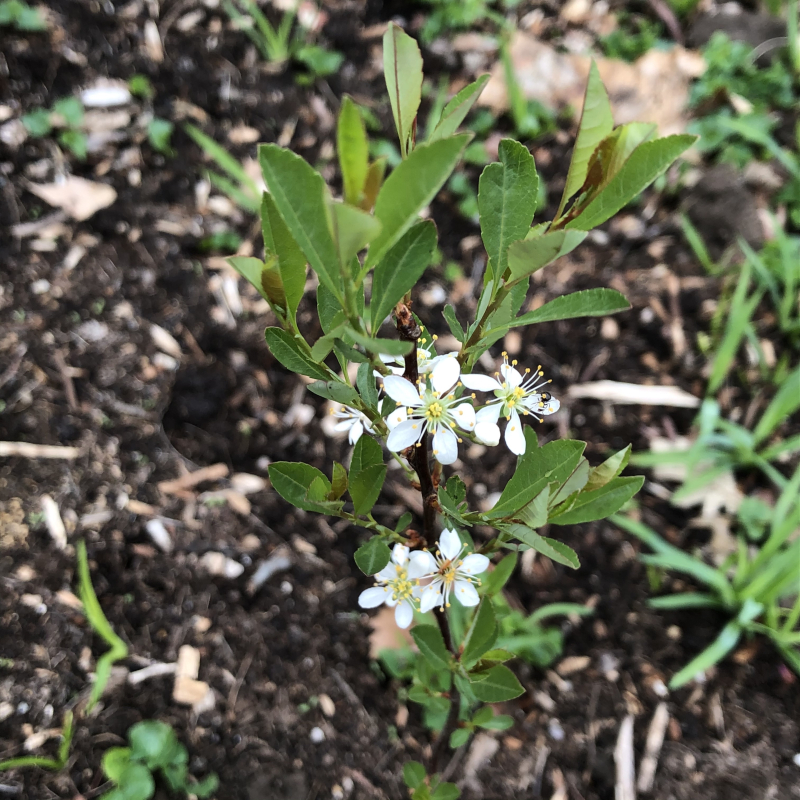 Moving on from fruit to nuts, we added to our hazelnut grove with a nice-sized tree that leafed out right after planting, with husks beginning to show. Hazelnuts have a strange sex life, as this fun post will show you (21 and over only, not because of the nut sex but because it's a distillery site). 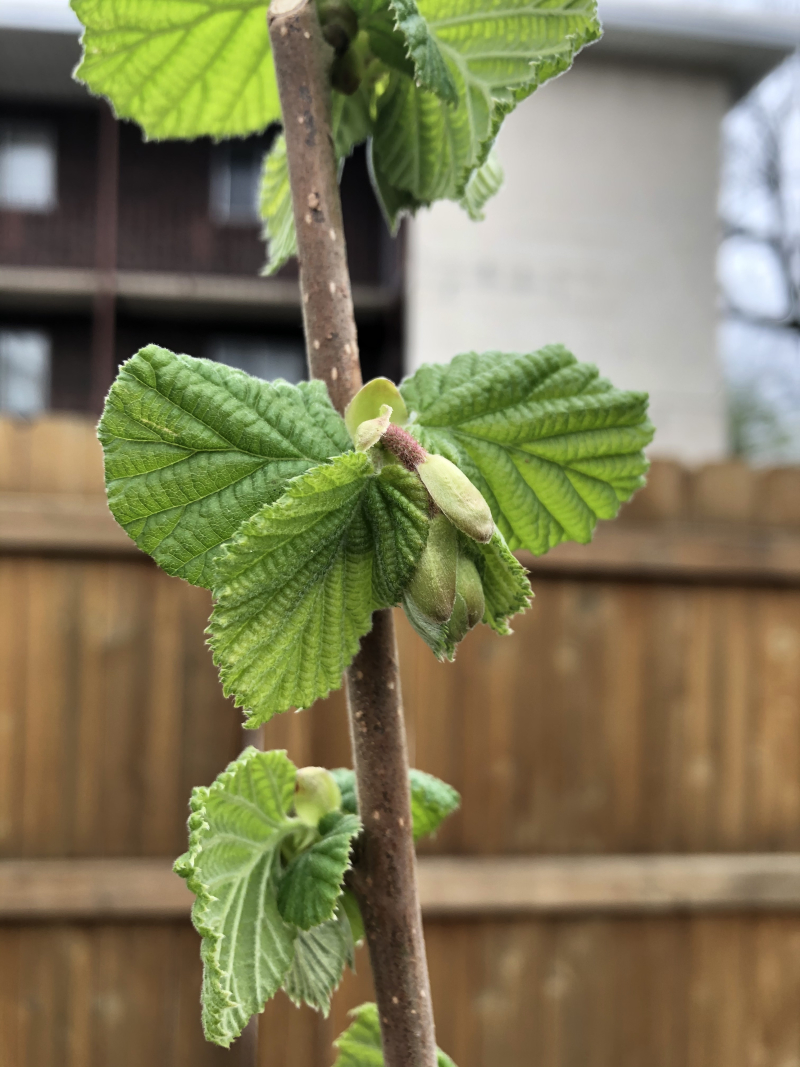 The hazelnut, bush cherries, and apple trees all come from Stark Bros., the world's oldest continuously-operating nursery - located right here in Louisiana, Missouri. I've ordered many of our fruiting trees and bushes from Stark Bros., including natives like this hazelnut, our paw paw trees, a serviceberry, and elderberry bushes, as well as both pear trees and a gooseberry bush. My experience with them has been stellar, with disease-resistant varieties that have so far stood up to challenges like cedar apple rust with no intervention. It's been mulch, water, and prune, and that's it.

We took possession of this property in fall of 2017 and put in the first trees and shrubs in the fall of 2018. One of those had its inaugural bloom this spring: our serviceberry, purchased at a native plant sale sponsored by the St. Louis Audubon Society. It's lovin' life on the northeast side of our house. 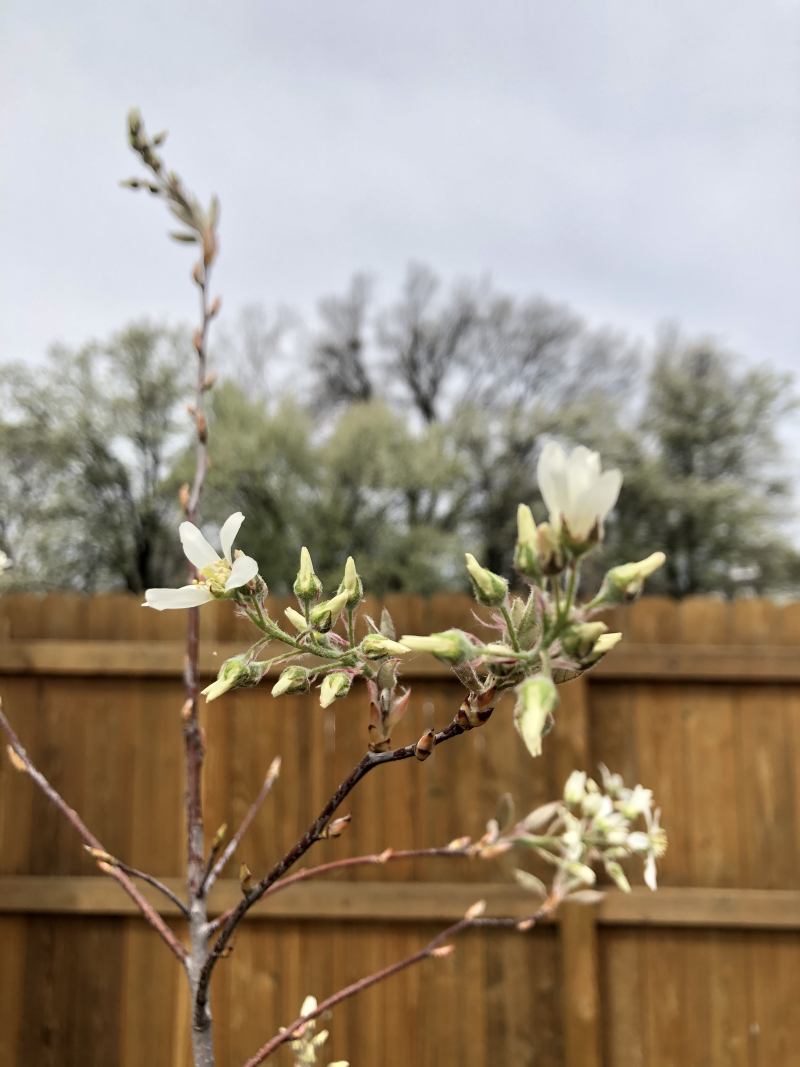 Next is the chokecherry tree, Prunus virginiana, which I picked up at Sugar Creek Gardens back in June of last year. Sugar Creek has been an excellent source of native plants; I've also purchased paw paw and witch hazel there, and this week I gave my brother Jason an idea list for some native wildflowers from Sugar Creek (they are open for curbside pickup during St. Louis County's quarantine). The other day I spotted a tiny native bee, possibly a sweat bee, on the chokecherry's flowering bloom. 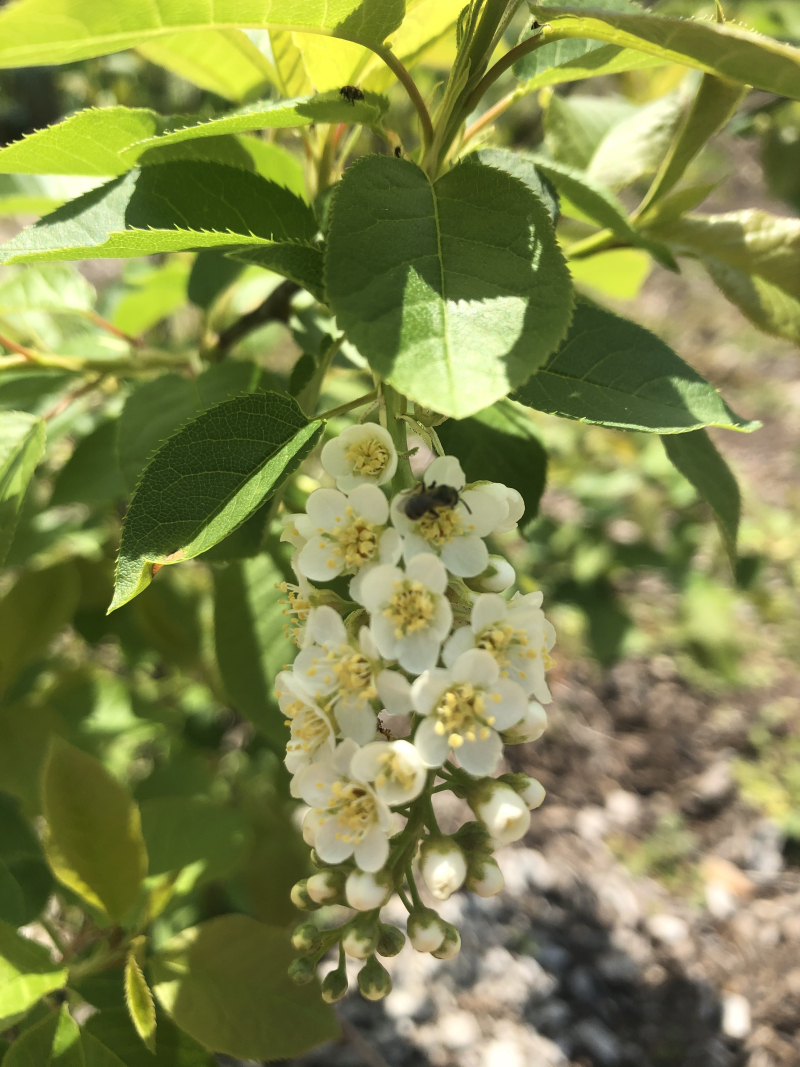 Next up is the success story of a once-diseased peony. I thought it was a goner last year, when it succumbed to peony blight. But I tried to save it with a healthy organic mulch all around, and this year, it's flourishing, with zero sign of blight. It's still in bud form, but I think the buds are really attractive, so here you go. 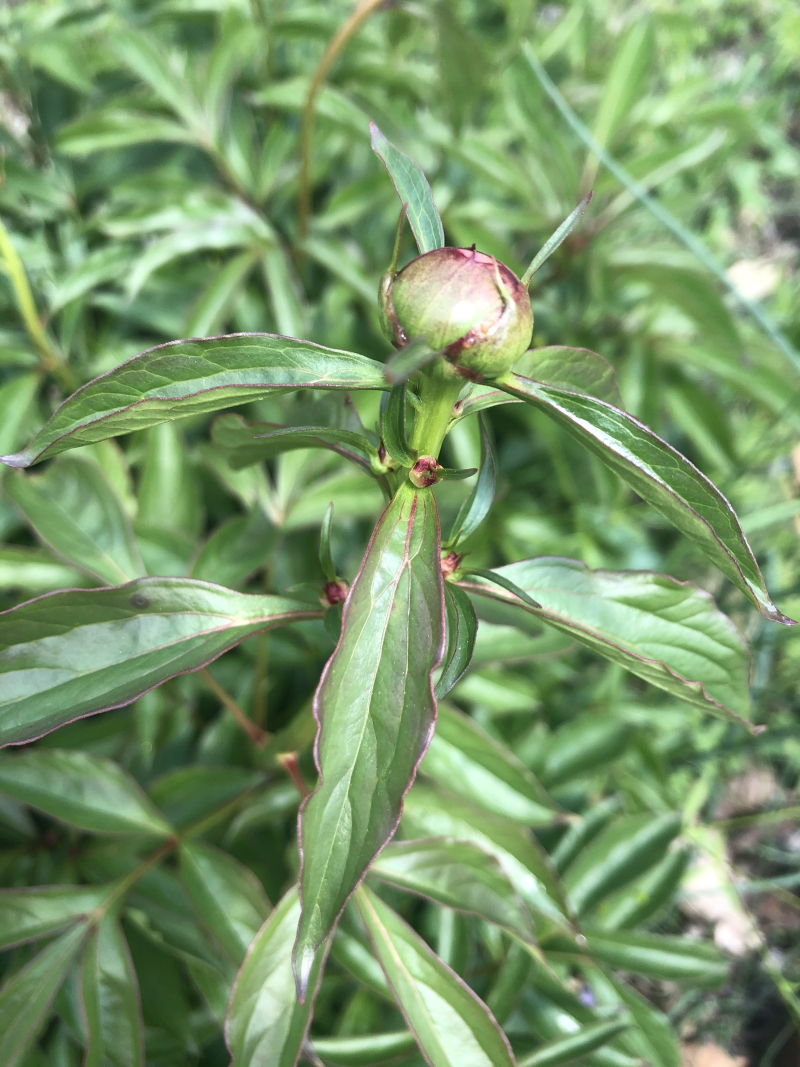 In the 'lovely statue' category are the two azaleas crowded into the bed on the north side of our house. They bloom like mad for a few weeks in spring, but I never see any pollinators around them. Jason asked me why, and the reason is likely because the azaleas are non-native to the Midwest, so the native insects did not have hundreds of thousands of years to evolve alongside them and come to regard them as a source of food. But I guess the domesticated honeybee, native to Europe, doesn't like them either? Who loves you, azalea? Here's the Barbie pink variety. 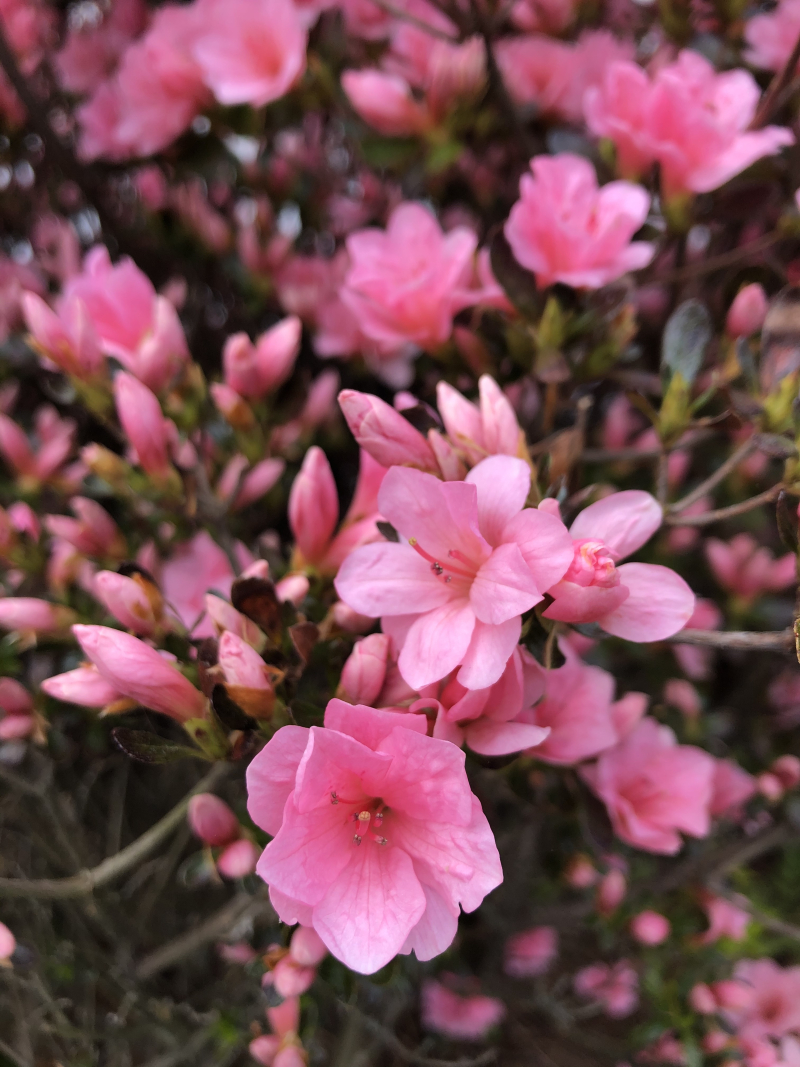 In all fairness, back in the Pacific Northwest, where there are some native azaleas, and overall the rainy climate and acidic soil better suits them, I bet the insects give them more notice. These two are very well established in the shady northern corner. Here's the red one, which at this time of year is more bloom than leaf. 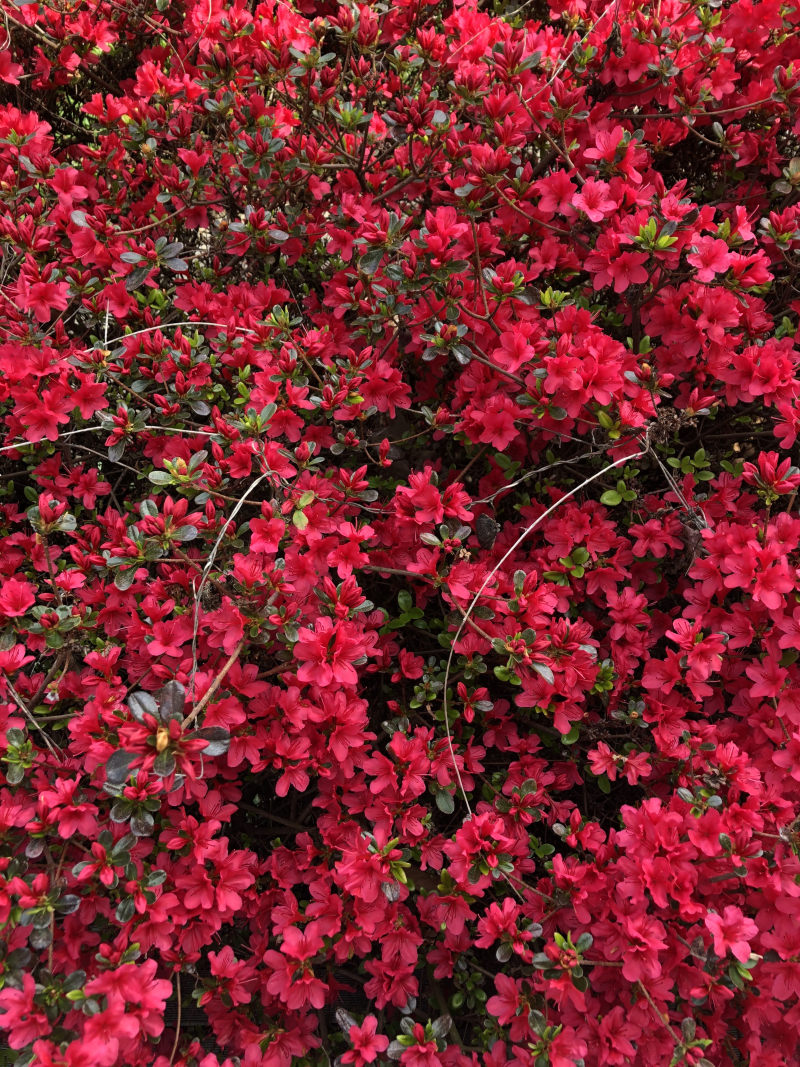 I'm told there's an Ozark azalea native to this area, but I've never seen one to purchase. I'm keeping an eye out for it, though.

Another pretty non-native that insects here in the Midwestern U.S. ignore is this pink candy cane-striped hyacinth, which popped up as a solo act near the azaleas. Anthony says it looks like it was sculpted out of icing, like a cake decoration, but maybe he's just hungry. We haven't had any cake since the lockdown began. 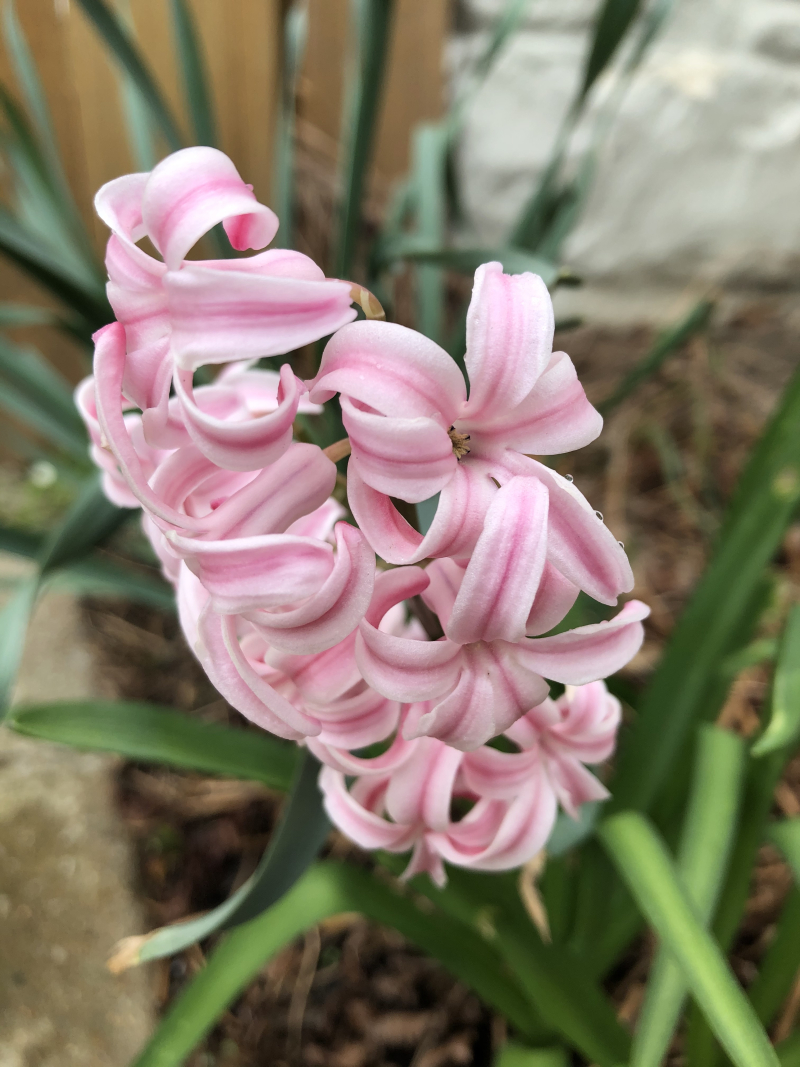 To rest your eyes a bit after those last three gaudy show stealers, here's a white bloom. These also popped up for the first time this spring. I didn't know what they were, but iNaturalist folk pretty unanimously ID'd it as star of Bethlehem, which is totally poisonous. It's non-native and can be aggressive, so it's on our watch list. Though like a lot of non-beneficial flora, it's very pretty. 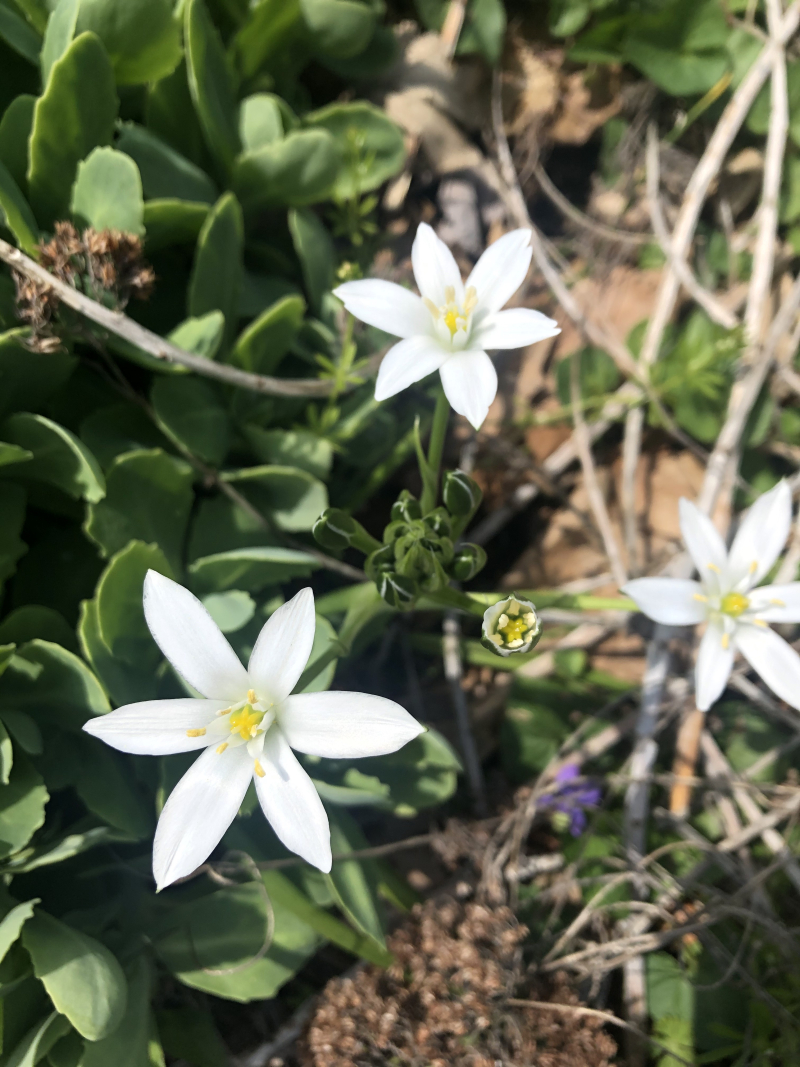 Last but not least is this bloom from a perennial root vegetable: horseradish. We planted it in June of last year, right into the clay soil with no amendments, have done nothing to it but sheet-mulch around it, and it's thriving. 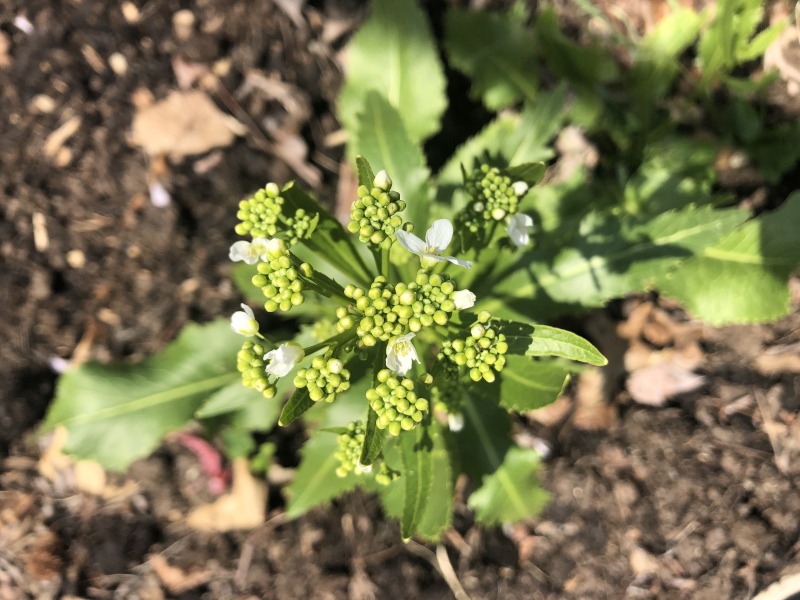 If you've made it this far, thanks for your attention as I've blathered on about the bloom bomb that's detonated on the farm this spring. As always, thanks for reading, and please post your own garden pics in the comments below. What's blooming in your world this spring?