How to Build a Squash Tunnel out of Bamboo - for Almost Nothing! 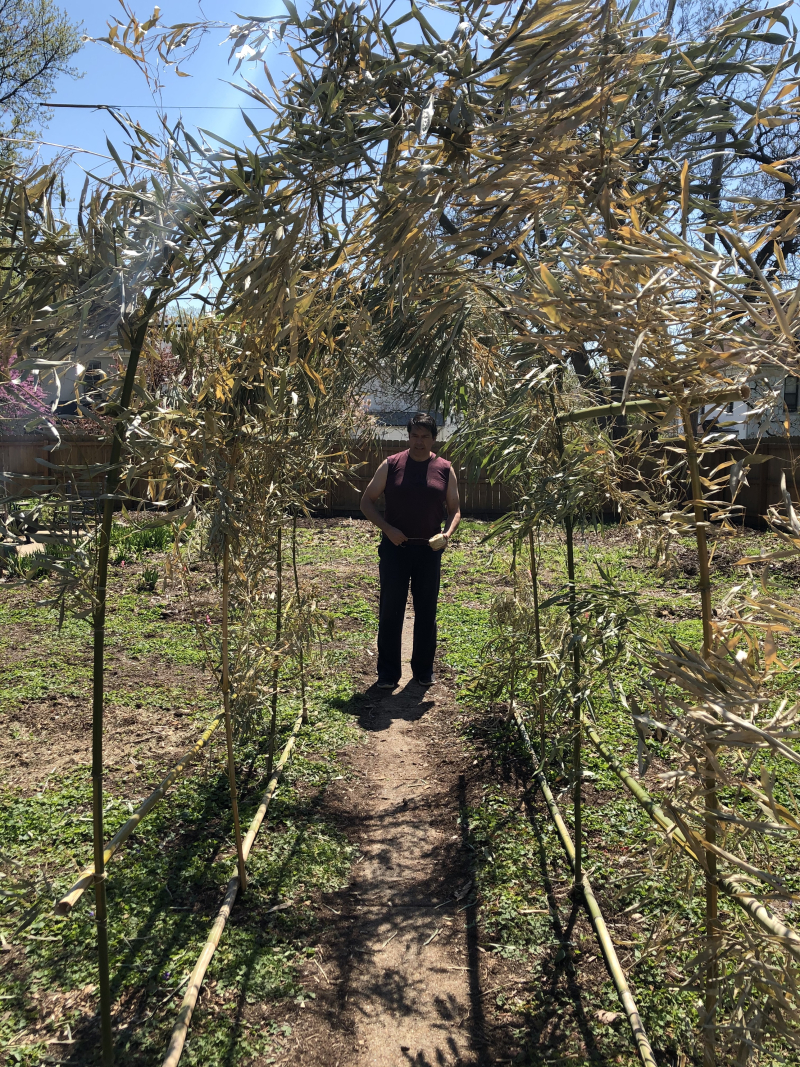 My father is a very handy man. He's the type of guy who sees a brick patio and thinks, "I could do that." And then he figures out how to do it. And actually does it. And it looks awesome. As his son, it is both heartening to see what can be done and discouraging when you see how often your attempts at doing something awesome falls short. But as my grandfather used to say, "It's good enuf fer who it's fer." It took me years to translate that from his Oklahoma twang to my more prosaic American standard into, "It is good enough for whom it is for." I always liked Grandpa's attitude towards life.

So, it is with this familial background that I announced with a casual and cavalier attitude that I would build a squash tunnel for the Dragon Flower Farm. I had no idea how. But we have the Internet, and I undertook some research. These days, however, it seems like there is nothing you can't buy pre-made. 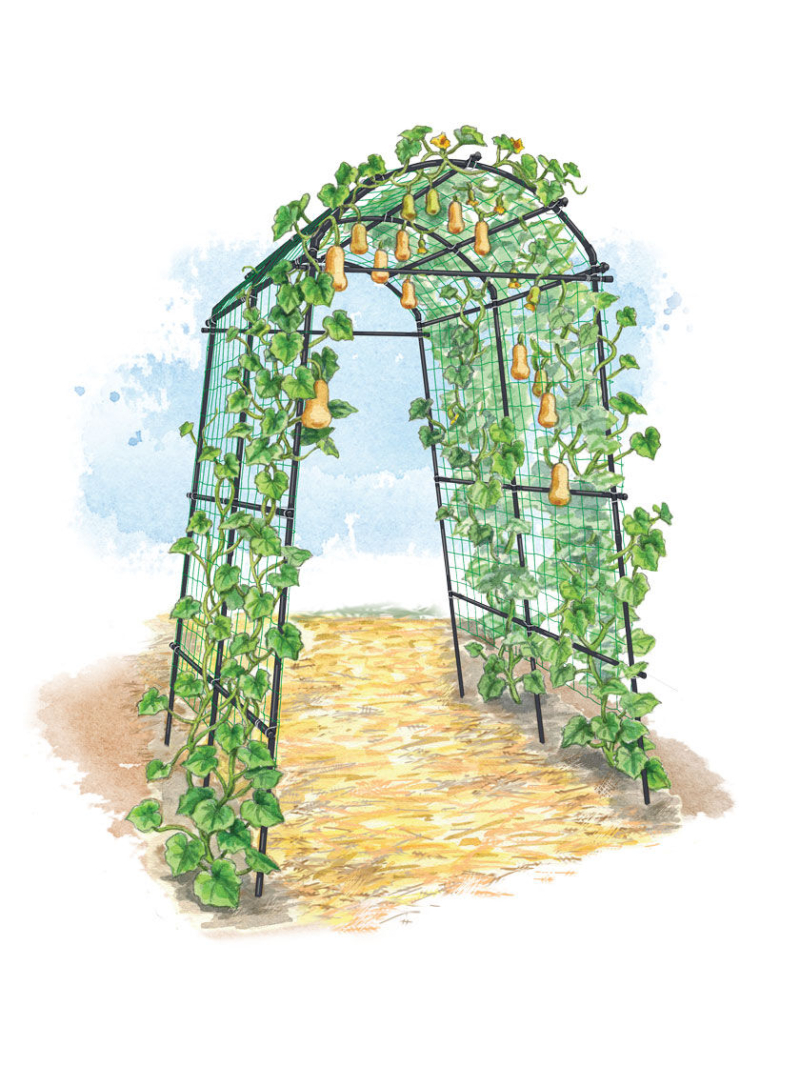 This one is available from www.gardeners.com. No, we don't have any kind of arrangement with them. I'm just offering this as an example of a squash arch that's pre-made.

But with a limited budget, and with a DIY attitude, we decided to forego purchasing in favor of building. Most people build squash tunnels from things like cattle panels. Here's a step-by-step guide for doing that over at Jobe's.

The cattle panel versions seem to be very functional, and we were leaning that direction for some time. In fact, we may have used that method if the shelter-in-place quarantine had not occurred. We were about to pull the trigger and go to our local big box garden/home supply store, buy some cattle panels, and go for it. But once the virus hit, we avoided going out to large, crowded stores, and the whole thing became a bit trickier and more DIY. One solution is the rustic, "let's-tie-some-sticks-together" look.

That one struck me as just a bit too rustic. I was hoping for something in the middle. Lisa and I were out for a walk, and we passed by one of our neighbors, who has a large grove of bamboo growing on the side of his property. Bamboo grows really fast. So, he has to cut it back a couple of times a year. He just has the city come and pick it up as yard waste. We'd already snagged a few of his excess bamboo canes previously, using them as tree stakes. And then the light went on - bamboo is great building material! He has all kinds of lengths and thicknesses. And since the shutdown, yard waste has not been picked up (with reduced staff and more garbage and recycling material being produced by everyone staying home, the city's workers were overwhelmed, and so they temporarily suspended pick-up). Well, talk about your win-win. He was thrilled to have us haul away all of his bamboo, and we got free building material. 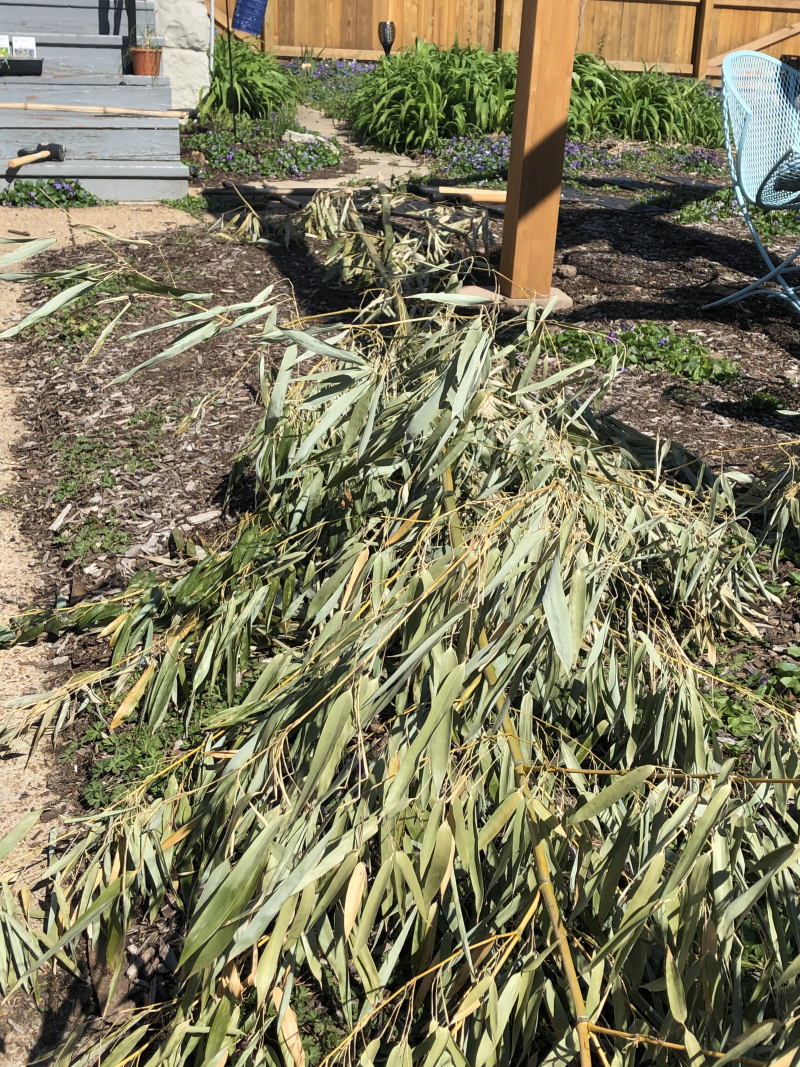 You need close to 30 canes to do this right. Any leftovers can be repurposed as garden stakes.

Now, all I had to do was figure out how to build a squash tunnel using bamboo. No biggie, right? Here is what I came up with. Will it work? I guess we will all find out by the fall. It will either collapse from the weight of the plants on it, be blown away in a storm, or be standing and provide some lovely images. Stay tuned to find out which scenario plays out.

First things first - what tools and supplies did I need? Well, other than the bamboo itself, this is literally all I needed. 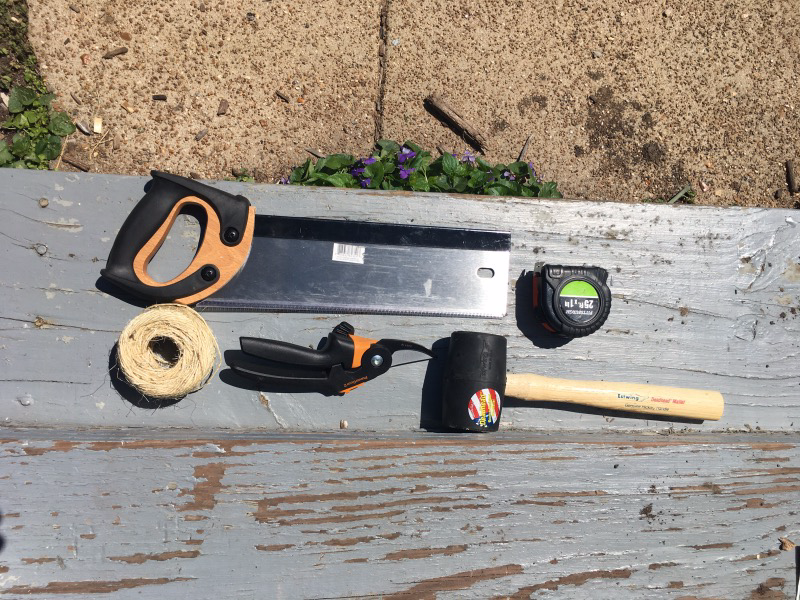 So the arch, all total, can be had for the cost of twine, provided you get the bamboo for free and already have these tools. Now here's how I built it.

I laid out two bamboo rods that were going to be my base supports to get an idea on the length of the tunnel. 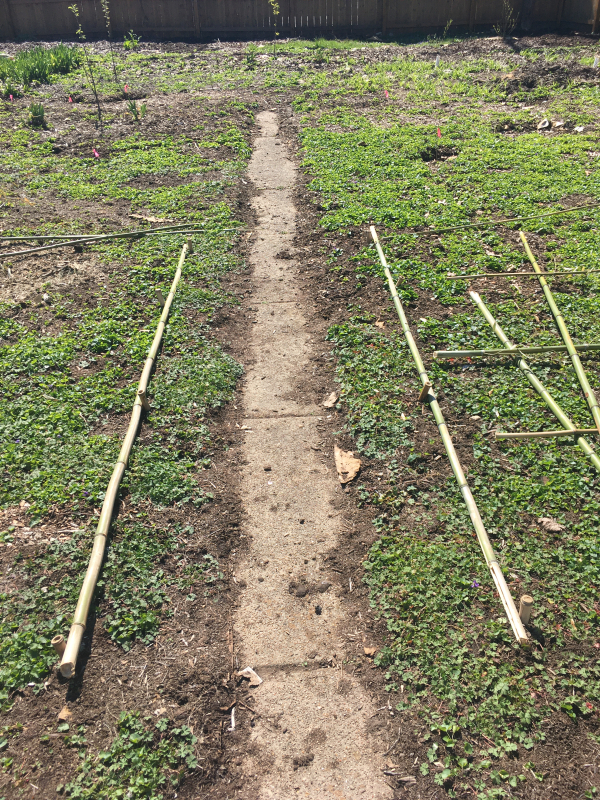 I then cut 6 pieces of bamboo into one-foot lengths, with a sharp 45-degree cut. 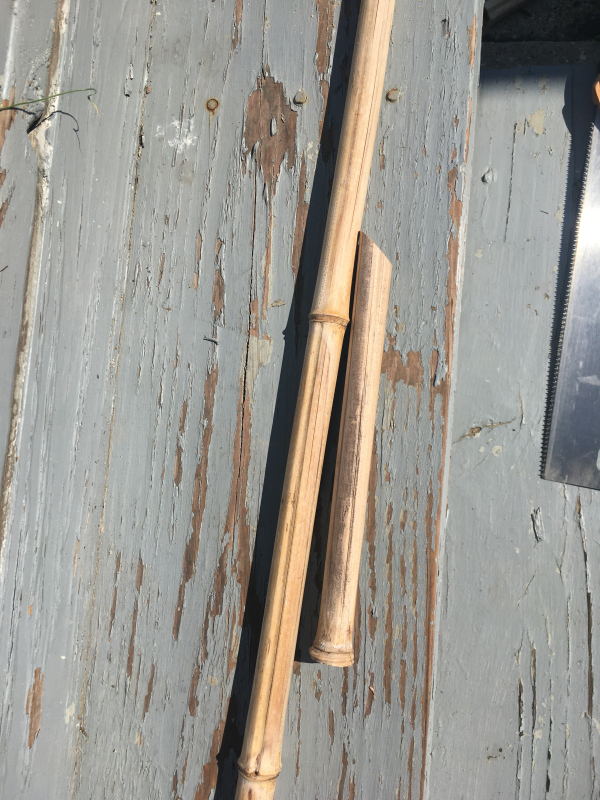 These were going to become my stakes. They were surprisingly easy to drive into the ground. Using my hand and bodyweight, I could push them 6 inches into the ground and then use the rubber mallet to drive them down until about 2-3 inches stuck up above the ground. I then lashed the base supports to the stakes with the twine. 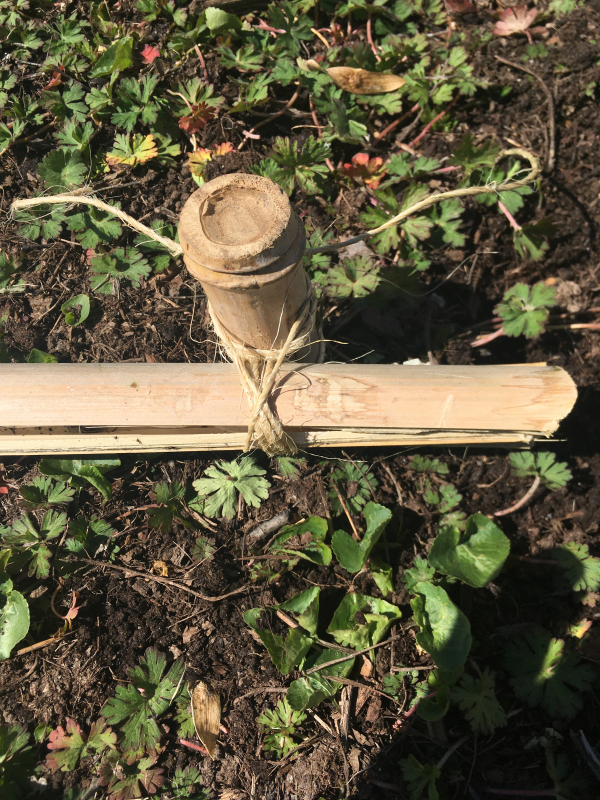 Then I cut the side vertical supports the same way I cut the stakes - with a 45-degree end. This allowed me to drive them into the ground using just my bodyweight next to the stakes. 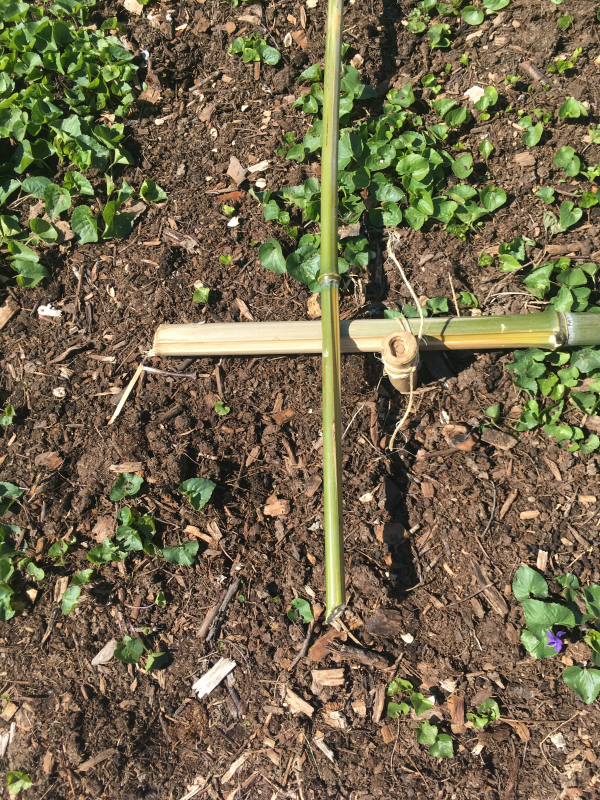 Overhead view - the sharp end will be driven into the ground next to the stake. 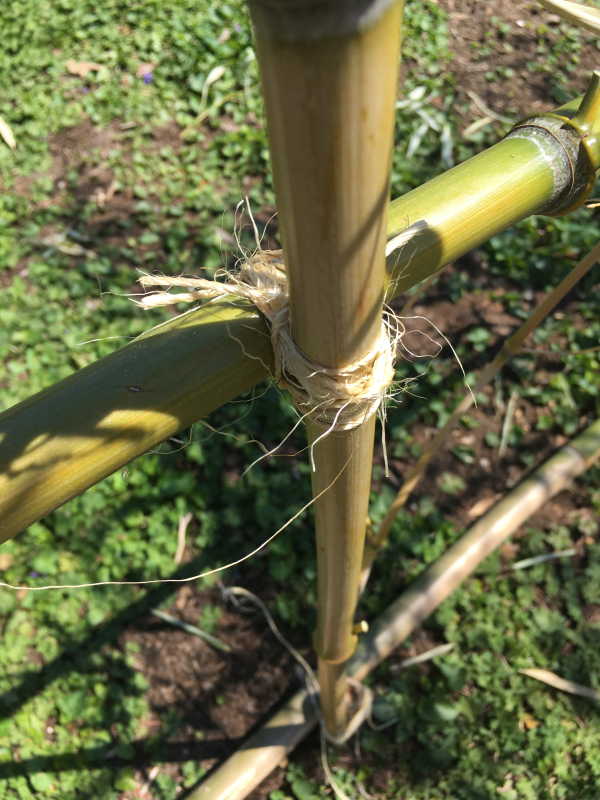 Here you can see the vertical support driven into the ground and tied to the stake at the bottom and the horizontal support lashed to higher up.

All that was left to do was to bend the vertical support bamboo to form the arch and tie them together. If there is a place where this falls apart, it is here. I wish I had started this project as soon as I had the bamboo when it was still green and very supple. But I waited a few days and the bamboo had begun to dry out and become more brittle. It still bent, but I think it might be more likely to break. 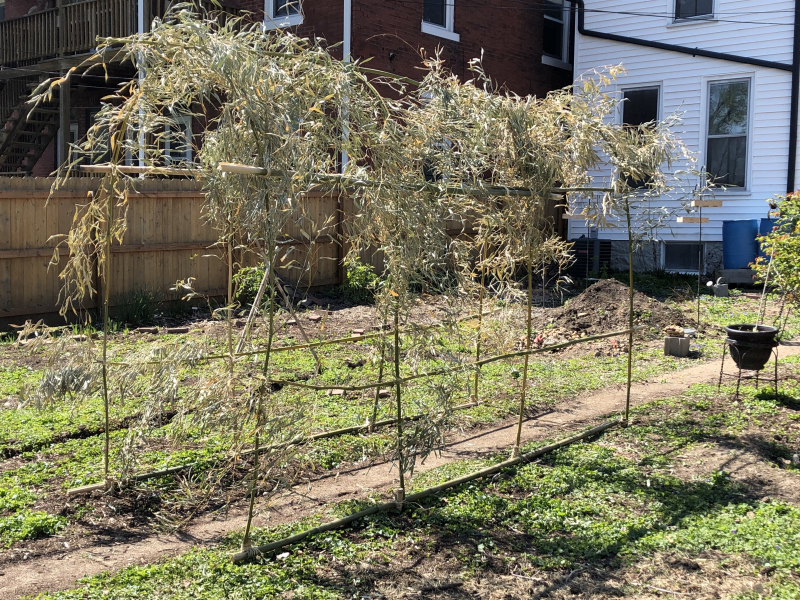 The full arch. I put another horizontal brace at the very top where the two sides of the arch meet for more support. We chose to leave some of the leaves on because we thought they looked nice. But as the bamboo dries, they may just fall off or be stolen by birds for their nests. We'll see. The real question is... will it support our squash? That is unknown. It also might be that the horizontal bracing is too high off the ground for the squash to reach, and there may just need to be more bracing on the sides for the squash to grow on. But that will be an easy addition if needed. 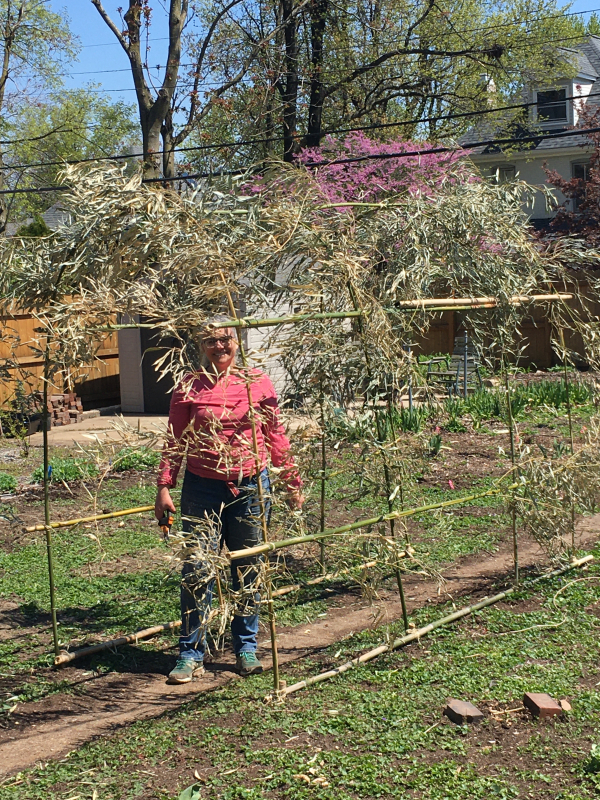 Lisa inside the tunnel. This clearly shows the first horizontal brace might be too high up. It is about thigh-high on Lisa. We may need to put another one below it about halfway to the ground. And perhaps one above it as well. Stay tuned!