Information Is Good, Even If the Results Are Not - Spring 2020 Growing Season Report Card
The Secret to Our Six-Pack Marriage 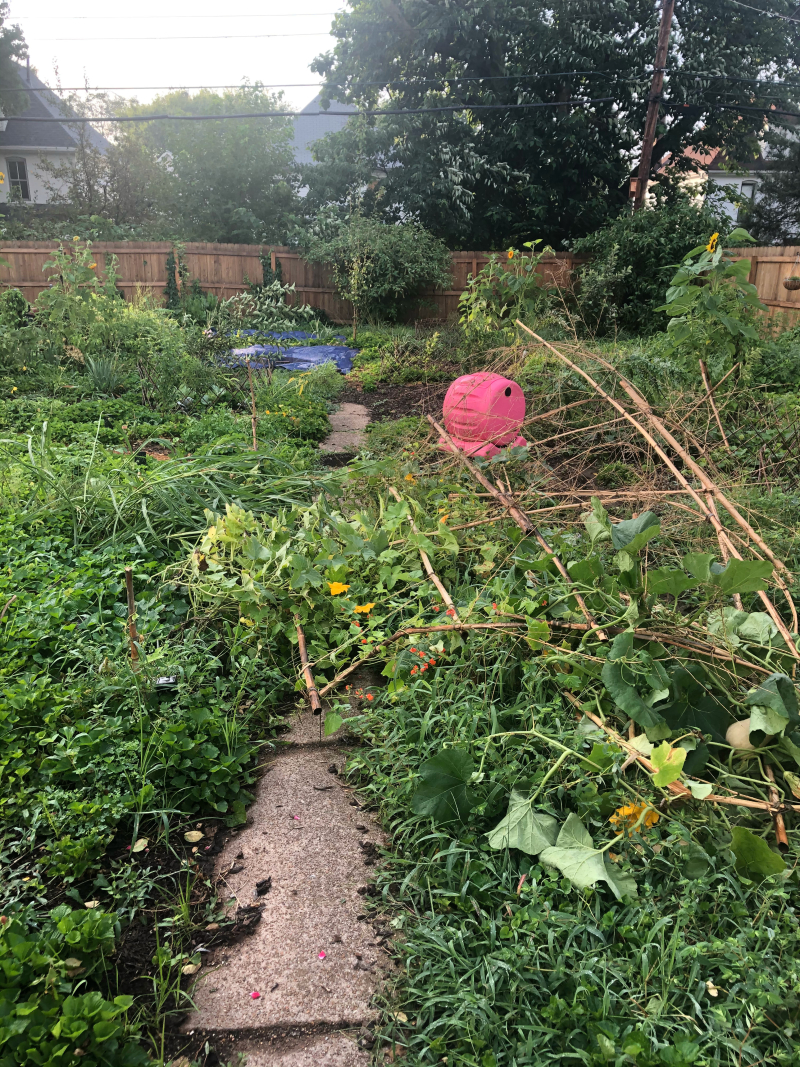 Yes, that is the tragic remains of the once... well, "glorious" might be a bit strong, squash tunnel (which included beans and cucumbers as well). Regular readers might recall the post about the construction of the tunnel - How to Build a Squash Tunnel out of Bamboo - for Almost Nothing. Ah, yes, those were times of innocence. As one can see by the above image, the squash tunnel is no more. The Midwest weather decided to toss us one of its regularly occurring storms, and the high winds did in the bamboo. I know, I know, you're thinking, "Isn't that the point of bamboo? It's supposed to bend in the wind?" Apparently, even bamboo has its limits. Ironically, before the storm hit, I was about to put together a post critiquing my own design. I'll do that briefly just in case someone else wants to tilt at this windmill.

The first mistake I made was in scavenging the bamboo and leaving it out for a week before starting the construction. When bamboo is green, it bends very easily. And if one bends it when it's green and then lets it dry, it holds its shape pretty well. But if you wait until it has started to dry and then bend it, it becomes brittle. And then when weight (or a strong breeze) is applied to the bamboo, it is in danger of splitting. 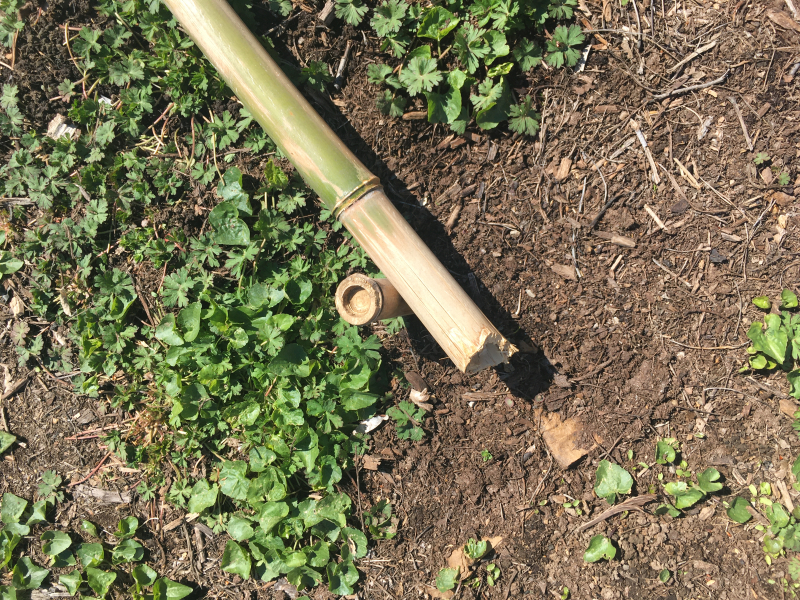 As one can see in the above photo, the bamboo was changing from green to yellow/brown. In other words, I was using this bamboo "too late."

My second mistake was attaching the side poles too far apart. I think the correct way to do it would be to have the first side pole about 6 inches above the ground. And then double the distance for each additional pole. So, the second one would be a foot above the first pole, the third two feet above the second, etc. 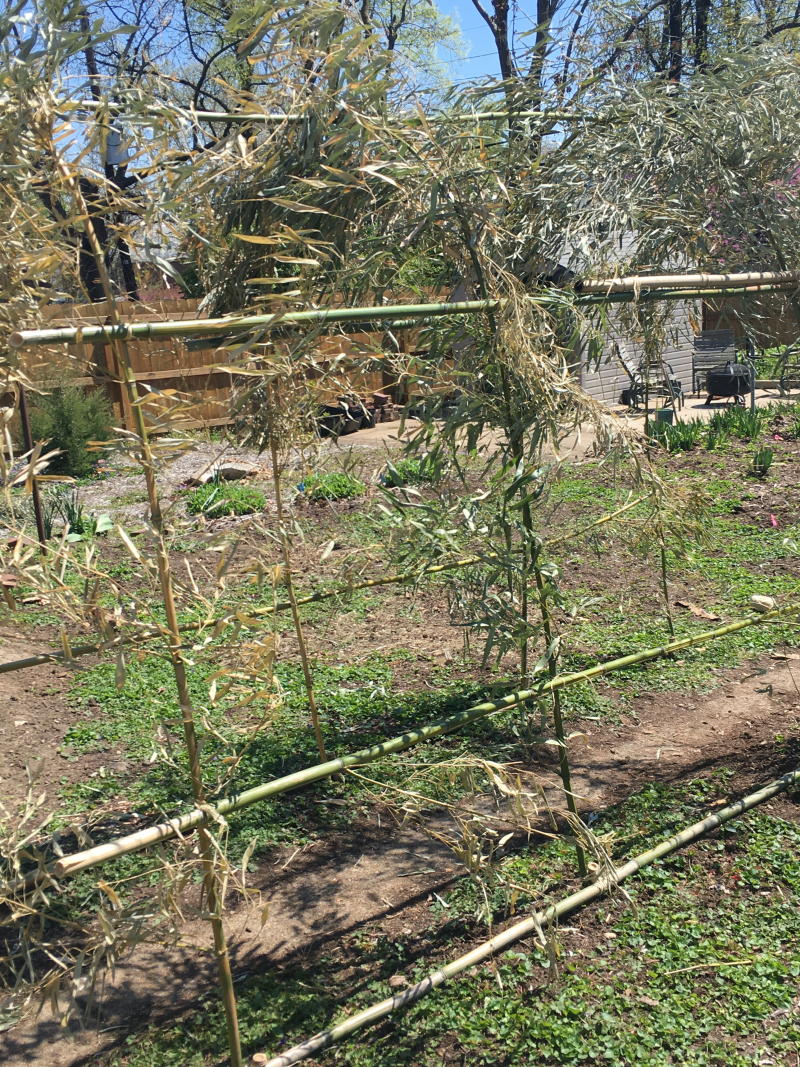 As you can see in the above photo, the first pole is about two feet above the ground, and the second four feet from the first. This wide distance meant that the plant vines struggled to reach up the sides of the tunnel. When they did reach up, they often tangled in the small shoots that were left on the poles. Which brings us to my third mistake, leaving the small shoots and leaves on the bamboo poles. My thought was that this would be both attractive and practical in that the vines from our squash would have more to which they could attach. 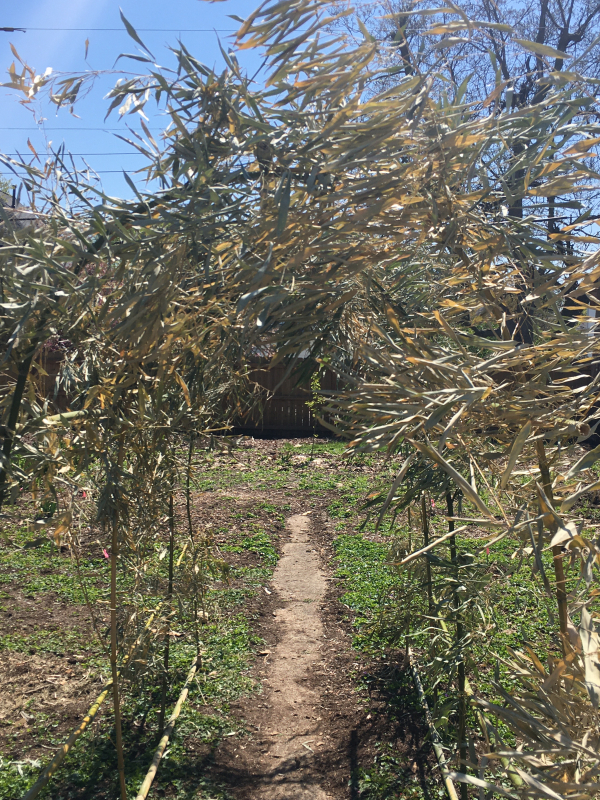 The leaves on the tunnel are attractive in the above photo. However, they are ephemeral. In a couple of weeks, they will dry and fall off, leaving only the twig-like shoots coming off the bamboo poles. This would be fine, but there was an additional problem. The vines would attach to the twigs, but rather than the vines pulling themselves up, they pulled the twigs down. the result is that the vine would grow back towards the ground, rather than up the sides of the tunnel.

Even with all of those mistakes, we did have some success. 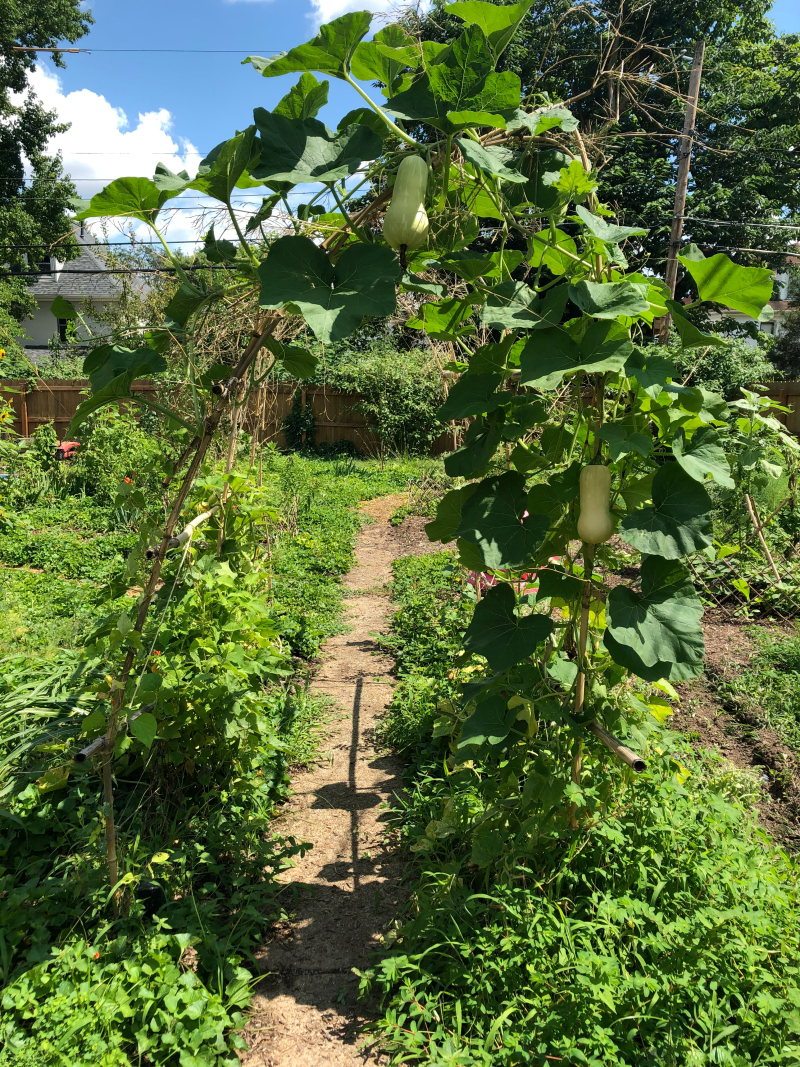 Look at those gorgeous butternut squashes hanging in the air! It wasn't perfect, but it still had some great visual appeal. And in the end, we've concluded, that is the main value of squash tunnels - they look cool as heck. Oh, sure, they do create a bit more growing space. After all, the tunnel is over a cement path. But really the amount of room saved is pretty slight.

After the devastating collapse, my very smart and resourceful wife quickly scavenged the bamboo scraps and set up small tripods for the vines to grow on. 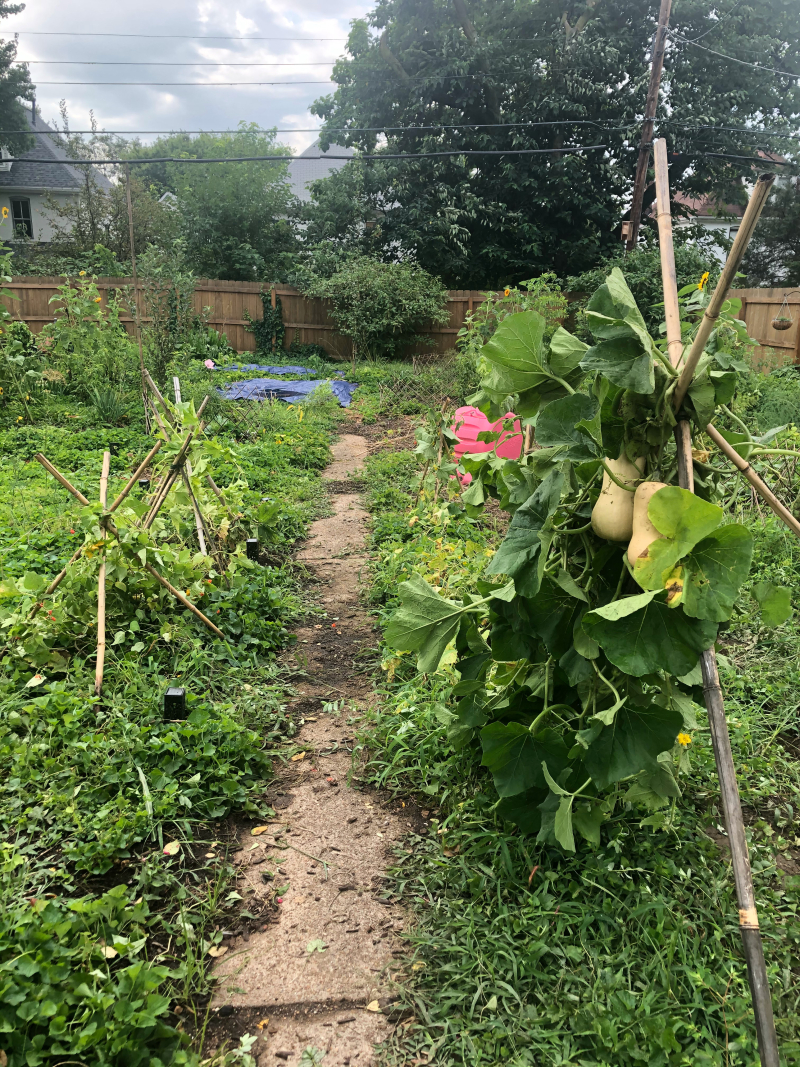 Not as fabulous, but guess what? The squash did just fine on these tripods. In fact, the beans and the cucumbers seemed to prefer them. I don't think we will do another squash tunnel. Midwest storms are just too strong and too common. But we still think bamboo is a great building material for a garden. Especially if you have a neighbor who needs to regularly get rid of poles, and you can get them for free. But next year I think we will focus on smaller, more practical designs.

Information Is Good, Even If the Results Are Not - Spring Growing Season Report Card