The 'COVID Cabana' Might Just Save Us All
The Garden in Winter, 2021: Pruning Trees, Just Noticing

The Cast Iron Egg Test: Does It Slide?

We've been meaning to post an update to the cast iron series for some time, as we ended up modifying our care and maintenance just a bit, and the result is pretty much the perfectly seasoned cast iron skillet. One way to test this is to fry an egg in the skillet and see if it can easily slide around on the skillet surface, as in the video above.

You can see the surface of the skillet has a lovely sheen. The egg doesn't stick. Neither does other food, such as these greens I cooked up right after the egg.

I'm taking part in an online permaculture education program, and I've just earned my first step toward a badge in food preparation and preservation by being able to demonstrate the above egg slide. But how did I get there? By taking the advice of permaculture author and educator Paul Wheaton as detailed in this cast iron how-to. For us the big takeaway was to just use a lot less water in the cleanup stage.

That was something to wrap my mind around at first, for sure. I mean, I'd already come a long way from my weird American phobia of germs enough to forgo soap when cleaning the cast iron cookware. That's important because soap strips away that 'lovely sheen,' which is in fact a hardened layer of grease and oil. But as Wheaton points out, it's not that you can't ever ever use soap, it's that you're really better off if you can avoid it.

So when I researched enough to see that we were probably using way too much water when cleaning the cast iron, I had to again quiet down the voice that worried the pan somehow wouldn't get 'clean' enough. Kind of silly when you think about it, since the pan is constantly getting heated enough to kill off any 'germs.' Besides, studies have indicated for years that we're probably screwing up our immune systems by killing off perfectly good microbial flora in our environments.

What really sealed it for me is this interesting phenomenon: I found that the less water we use, the cleaner the pan is. Why? Because the surface became truly non-stick, so food just slipped right off of it. Here's our typical cleanup now: simply wipe with a paper towel!

So that's our latest advice: Just wipe out the pan after cooking if you can. If you need to scrub, use a non-abrasive scrubber*, with just a little bit of water to loosen the food bits. If you do this, it's a good idea to set the pan back on the heat for a bit to evaporate the water, and then rub the pan with oil before storing. 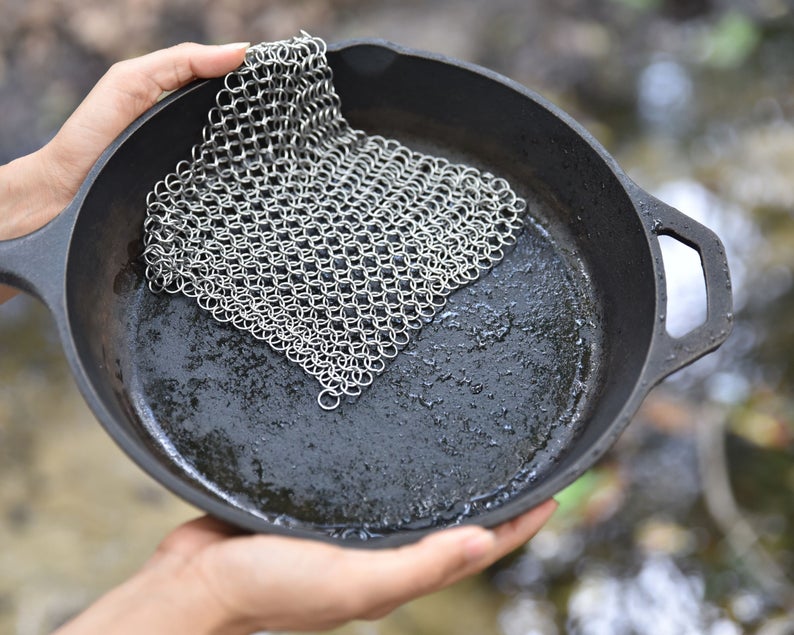 *Some people use rock salt, though we have not tried this. We have also not tried these chain mail cast iron pot scrubbers available on Etsy, though it's on our list. (That's our affiliate link, by the way, so if you buy one using the link, we might get a commission.)

So much more about cast iron here.

Or go directly to The Skillet Feeding You: How to Cook with a Cast Iron Skillet