Now's the Perfect Time to Start That Sourdough A sourdough starter is a thing of beauty and seeming magic. All it takes is a bowl of water and flour, and you can 'catch' wild yeast from the atmosphere, claiming it as your own to use in everything from a simple loaf of bread to pancakes and pizza dough.

If you've never done this before and are relying on commercial yeast packets for your baking projects, you don't know what you're missing. I highly encourage you to give wild sourdough a try. Not only is the flavor and texture far superior, but it's a lot healthier for you, too. As someone who suffers from Mast Cell Activation Syndrome, I can tell you that wild sourdough is pretty much the only bread I can eat without triggering symptoms. Since I love bread, creating my own sourdough has been more than worth the effort to bring bread back into my life. As it turns out, the process is also thoroughly satisfying.

Spring is a great time to start sourdough because the yeast thrives in the mildly warm temperature range of 65 to 85°F (18-29°C). Any colder, and it can be tough to capture that yeast; any hotter, and the flour/water mixture can quickly become acidic. I captured my culture last spring - over a week in late May to early June during relatively mild weather for my region at that time of year. I've nurtured it over the course of the past 12 months, baking with it, letting it go dormant, and then reactivating it to bake again for what I like to call MY YEAR IN SOURDOUGH. Now I can confidently report back to you on what works and what doesn't. This is a four-part series starting with... what else? The start. 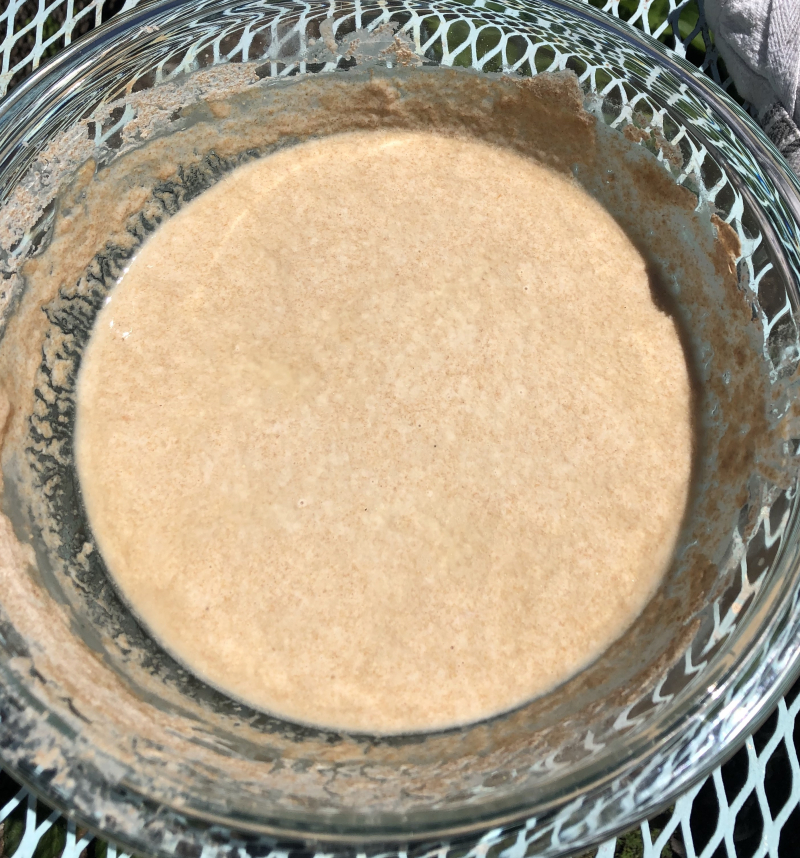 What didn't work for me? YouTube videos. Unfortunately, in this case, the algorithm's highest-ranking videos all tell you to do things in kind of silly ways, using methods that at best fail to rely on the collective historic wisdom of true sourdough artisans and at worst just don't work at all.

What brought success in spades? Following (and modifying) the advice laid out in Ed and Jean Wood's excellent book, Classic Sourdoughs: A Home Baker's Handbook. We inherited this book from Anthony's mother, A. Grace, when she passed in 2011, and it's just a pity I hadn't cracked it open sooner. We don't get anything in exchange for this endorsement, but here's the book if you want to check it out, with a link to where you can buy it used without involving the almighty 'Zon in the purchase. 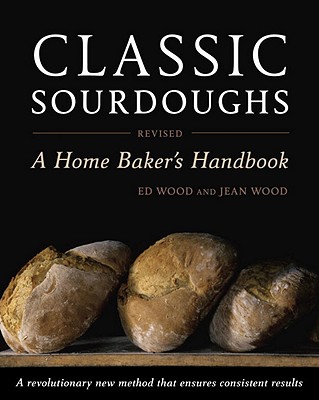 One of the best things about Classic Sourdoughs is that it doesn't present a one-size-fits-all approach but rather educates you on the nature of sourdough so you can adjust and adapt to your own environment. And that's crucial.

I live in a Midwestern river town, and even by late May, our air gets steamy, the humidity index high. But luckily, the temperature stayed under 85°F for that week or so that I successfully captured a sourdough culture. If you're in a more northern area, you might need to create a proofing box, which you can do with a standard Styrofoam cooler and socket light. This is outlined in Classic Sourdoughs, but I have not done it myself.

Another option is to capture the culture in the candle warmth of a (solar) Sun Oven set up inside, which is on my list to try as soon as we can. Cat in the Flock might receive a commission if you purchase a Sun Oven through this link, at no extra cost to you. Sun Oven is doing important work to promote solar energy and bring sun ovens to villages that dearly need them. 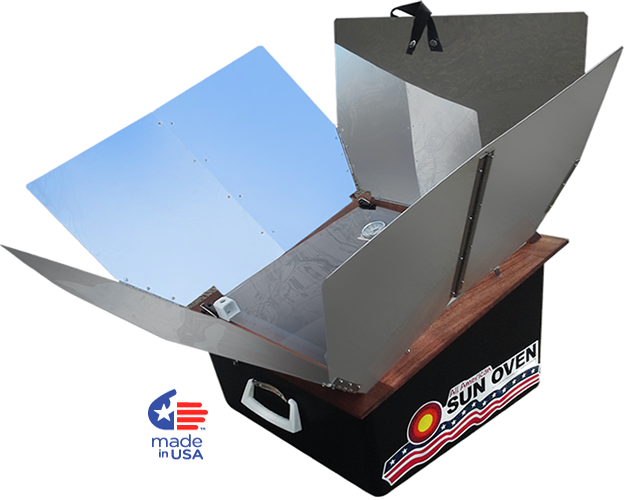 But if you've got a lovely springtime range of 65-85°F (18-29°C), you should have no problem starting your culture. I strongly recommend doing this outside, as indoor air can be drier, less biodiverse, and laden with household contaminants, especially if you don't have the windows open. We tend to wait until the last minute to turn on the A/C, so our windows were open last year in late May, but I started the culture outside anyway.

A note about flour: I've used both unbleached all-purpose white flour and whole wheat flour, as well as a mix of both. You might have to add more water for whole wheat once you get to the dough stage, something you can sense if the dough is too hard and thick instead of a nice doughy mound you can easily knead. In all cases, I prefer organic, non-GMO if I can get it.

Vigorously stir the flour and water together, introducing enough air into the mix. A sourdough starter consists of both bacteria and yeast, and they need air to thrive. Don't freak out that I said "bacteria." Some bacteria is good for you, and in this case, it's what gives the sourdough its flavor. The yeast provides texture.

You shouldn't cover the bowl with a lid or plastic or anything else that will prevent the organisms from finding your flour and water. If you're worried about insects getting into it, cover with cheesecloth or another fine-mesh screen. I used a splatter shield held down with a rock to keep both insects and critters out. Now, you wait... 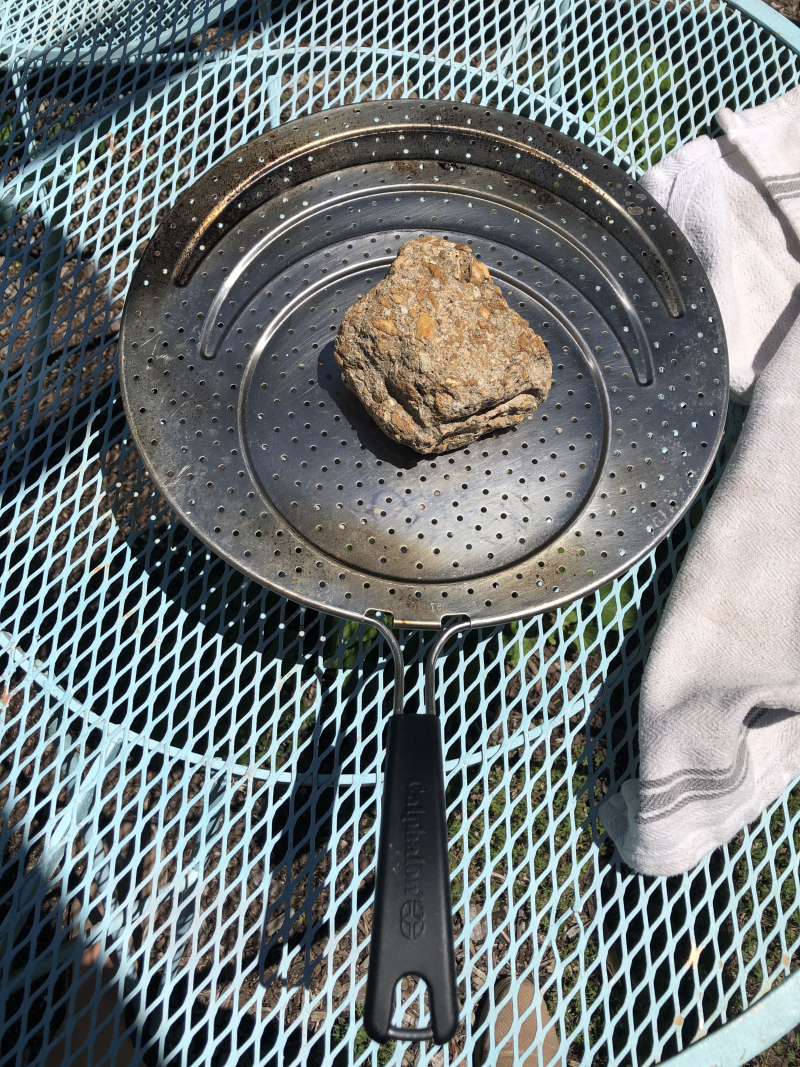 Give the mixture a good stirring at least twice every 24 hours. During this time I checked it occasionally, eyeing its consistency and sniffing to make sure the odor was right. If the odor heads south, that means it's been taken over by undesirable organisms, and in that case, you'll need to start over. This happened to me once; actually, what happened was I had a great start pretty much right away but didn't understand that's what I had and left it out too long, at which point it went bad.

The mixture should begin to bubble a bit after 2-3 days. At this point, add 1 cup (140 g) of flour and enough water to maintain consistency. I had to repeat these "feedings" a few times before I got a fully active culture on my second round. Let this take the time it takes, even if you go beyond the four or five days recommended in Classic Sourdoughs. As long as the culture's trending toward activity and doesn't look or smell bad, you're on the right track. A fully active culture will look spectacular and alive. To some this means "bubbly," but to others it means "foamy." Here's an example. 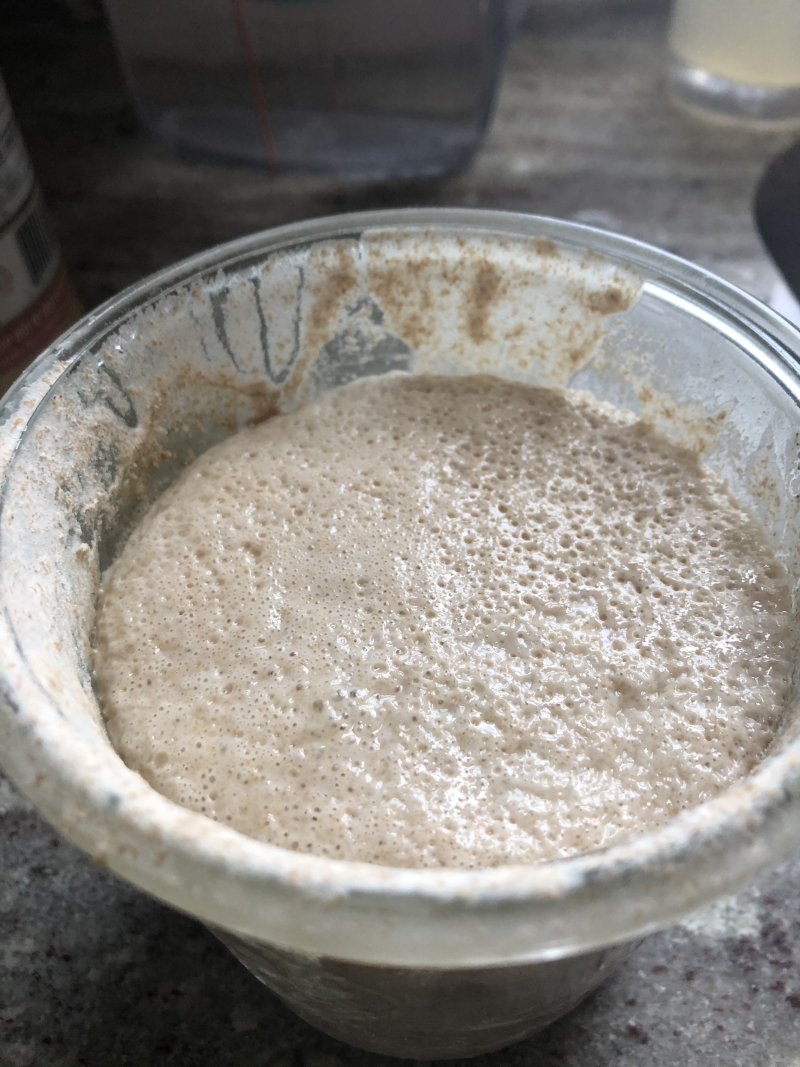 You might experiment with different locations, too. While the photos above show my culture mix sitting on top of a garden table, because it wasn't protected from rain in that location, I eventually moved it to under our back porch, in the walk-down stairway to our basement, where it seemed to thrive, out of both rain and sun.

Once you've got a nice, active culture, you can bake with it immediately, but definitely reserve some of the original for future baking. You can also store it in the fridge to use later. I recommend labeling it as sourdough starter and including the date. This is now your start, your buddy, your friend; it will stick with you through life if you keep feeding it. The Woods recommend doing this every couple of months even if you're not baking, and I concur. I had two starts, one of which I baked with every two months. It's still my winner. The other one went four months' dormant in the fridge, and I opened it this spring to find it had gone bad: black fuzz and a terrible smell. I had to pitch it.

But the good one! Oh, the things I've baked... I'll tell you all about it in a future post.

Our Series on Cast Iron Care and Use

Posts on the Topic 'Food Medicine'

How to Cook a Perfect Pot of Rice Every Time