Poppies and Whimsy on the St. Louis Native Plant Tour 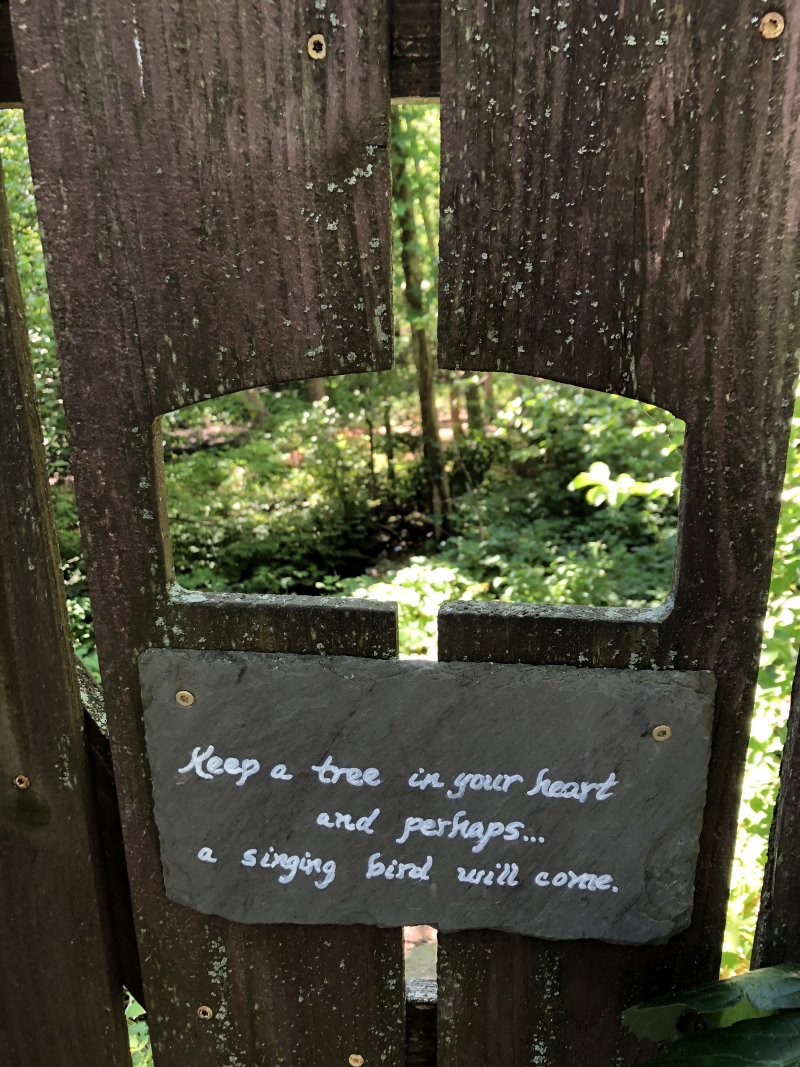 View of a woodland bubbler in the garden of Dan and Mary Terpstra, also featured in Doug Tallamy's book, Nature's Best Hope.

Anthony and I attended the St. Louis Native Plant Tour for the first time this year. It was a masked, socially-distanced, outdoor (of course) affair in early June, with a wide range of gardens to view. A joint offering by both the St. Louis Audubon Society and Wild Ones St. Louis, this year's tour included nine residential gardens located across the St. Louis metropolitan area, on the Missouri side of the Mississippi River. We made it to six of the nine. 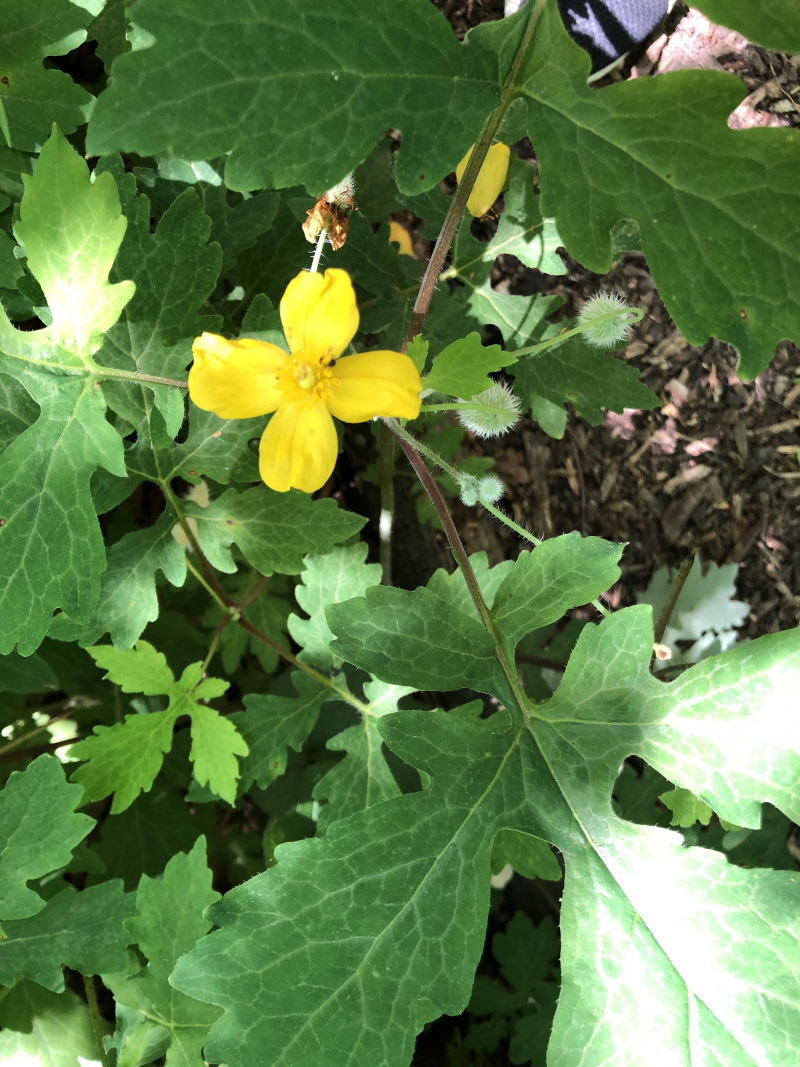 Celadine poppy growing in the garden of Dan and Mary Terpstra.

I've talked about the Audubon Society's Bring Conservation Home program on the blog before - most recently when we scored platinum status for our own garden. Many BCH gardens were included in the tour, with a nice smattering at every level, from silver through gold and up to platinum. One of our favorites on the tour was Dan and Mary Terpstra's woodland oasis. It's easy to see why this .62-acre property has achieved platinum status - and why it attracts so many birds - 150 species and counting. 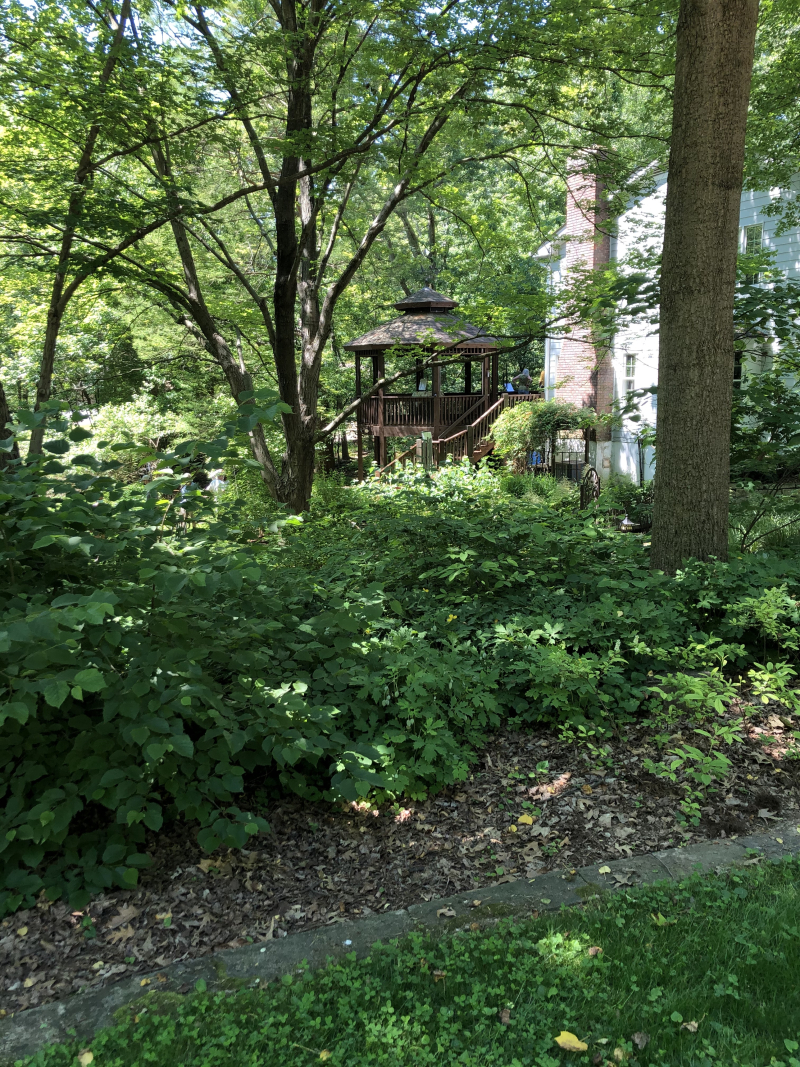 View across the woodland toward the gazebo in Dan and Mary Terpstra's garden.

Here's a video of their pond, which features a bubbling cascade into a naturalized area for native water-loving plants.

While the Terpstras obviously take conservation seriously, they haven't neglected the whimsical aspects of gardening. 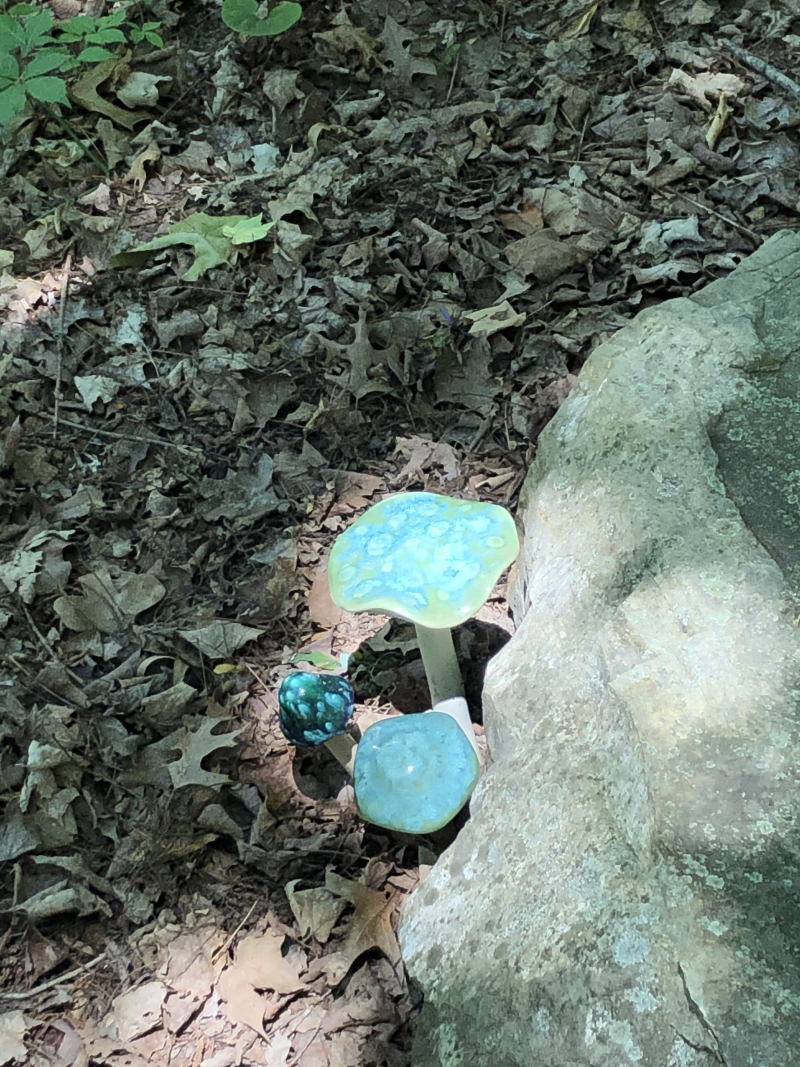 Garden art tucked into a rock in Dan and Mary Terpstra's garden.

Speaking of garden whimsy, while the Terpstra's property offers a stunning example of what can be done, my favorite of the tour was actually the garden of Christina Rutz and Mark Hrabovsky, which had whimsy in spades. 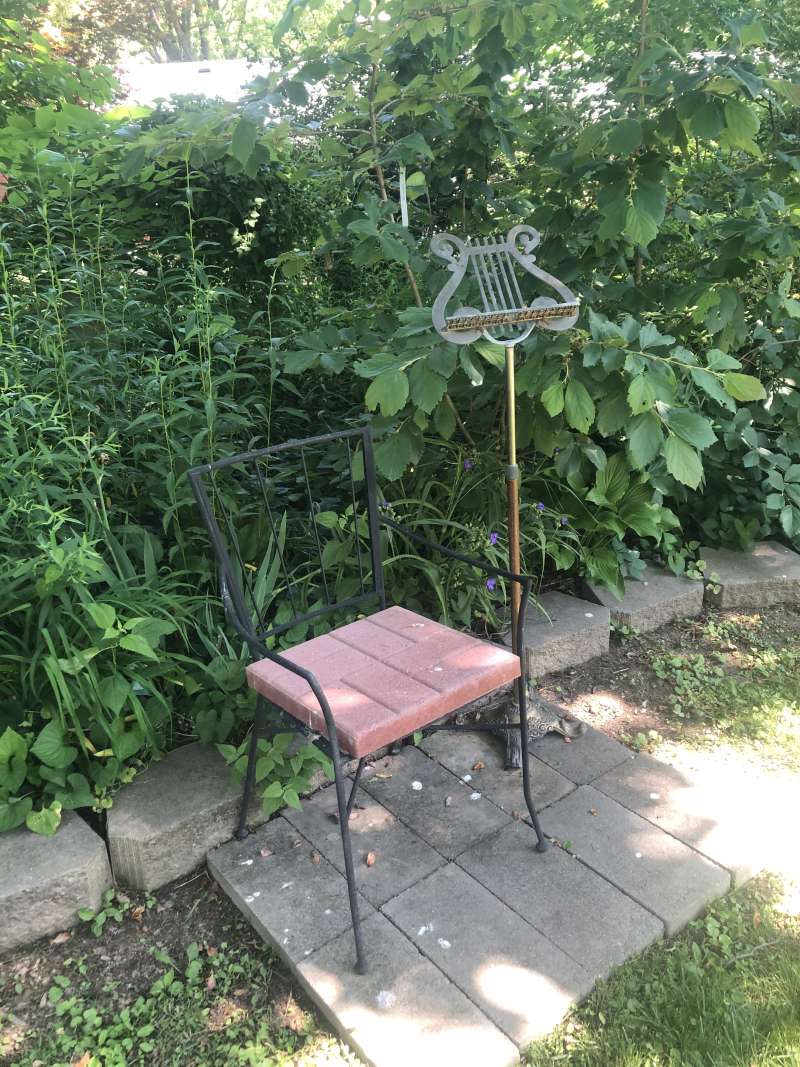 In the garden of Christina Rutz and Mark Hrabovsky.

This garden clocks in at the BCH gold level and comes with a wonderful personal story, to quote the tour brochure:

Established in 2010, Carolyn's Garden is a living memorial to Christina's mother, an avid gardener. Diagnosed in 1996 with stage 4 breast cancer and given six months to live, she proved doctors wrong, living with the disease until 2011... a testament to being a lifelong gardener.

Many of the plants in the Rutz/Hrabovsky garden were transitioned there from her mother's garden over in Illinois. 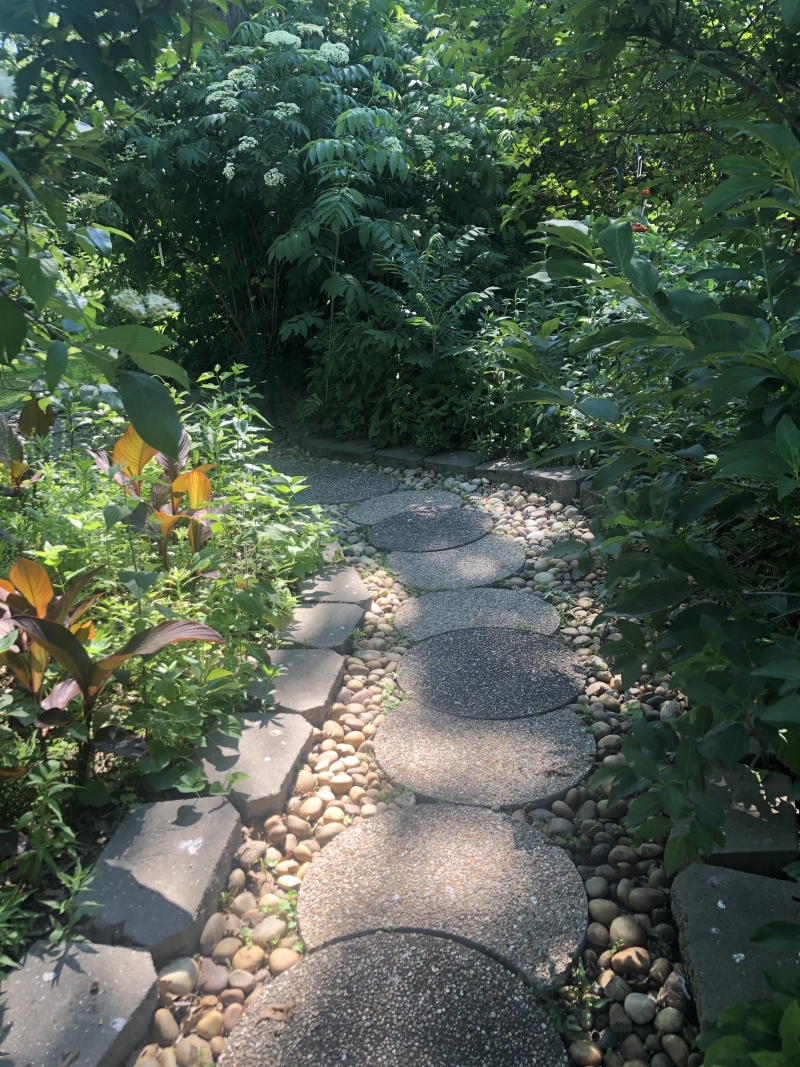 A pathway beckons in the Rutz/Hrabovsky garden. 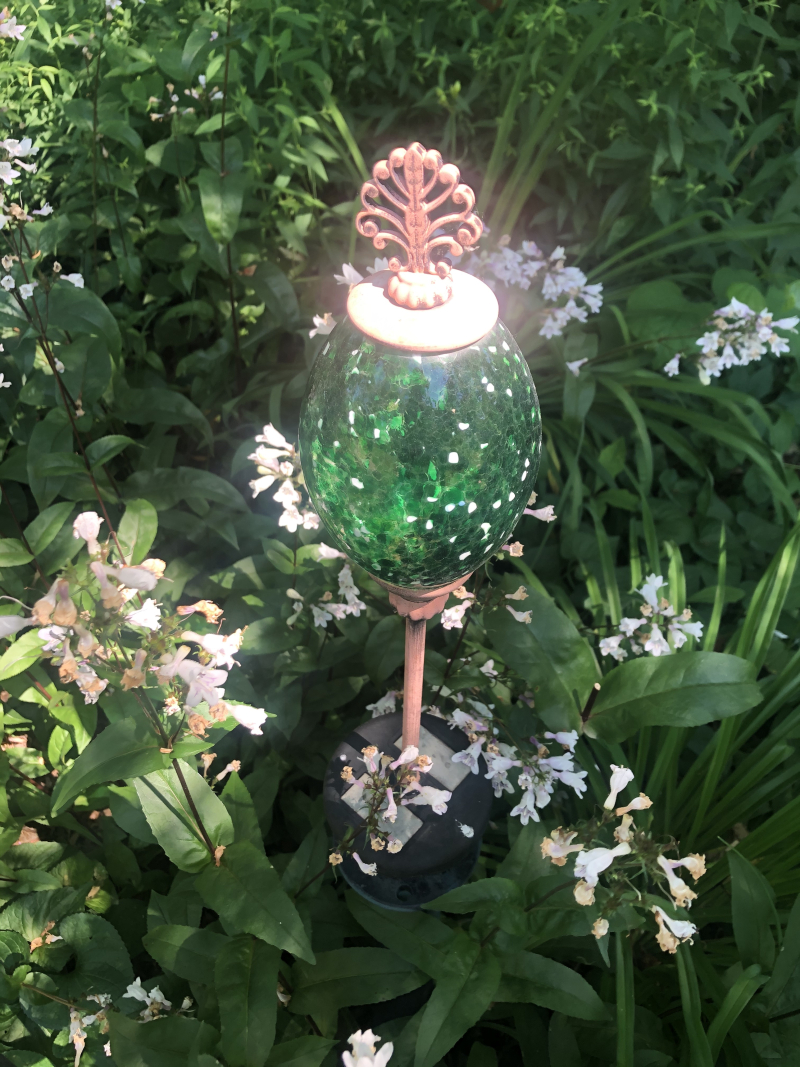 A glass ball emerges from penstemon in the Rutz/Hrabovsky garden.

Another highlight was getting to tour the garden belonging to Robert Weaver, editor of The Gateway Gardener, which features this lovely water bubbler.

Now, a note about these bubblers, though: You don't need them. While it's true that birds are attracted to the sound of bubbling water, the problem with bubblers is they need a power source in order to, well, bubble. And that means a) you have to be able to afford to install (or have installed) an electrical bubbler connected to your home's power system and b) you're adding to your home's draw on the electric grid, not the best option, eco-wise, unless it's also solar-powered. Our garden achieved platinum status without a bubbler; as mentioned previously, we have four bird baths, all fashioned out of repurposed items and not costing a dime. 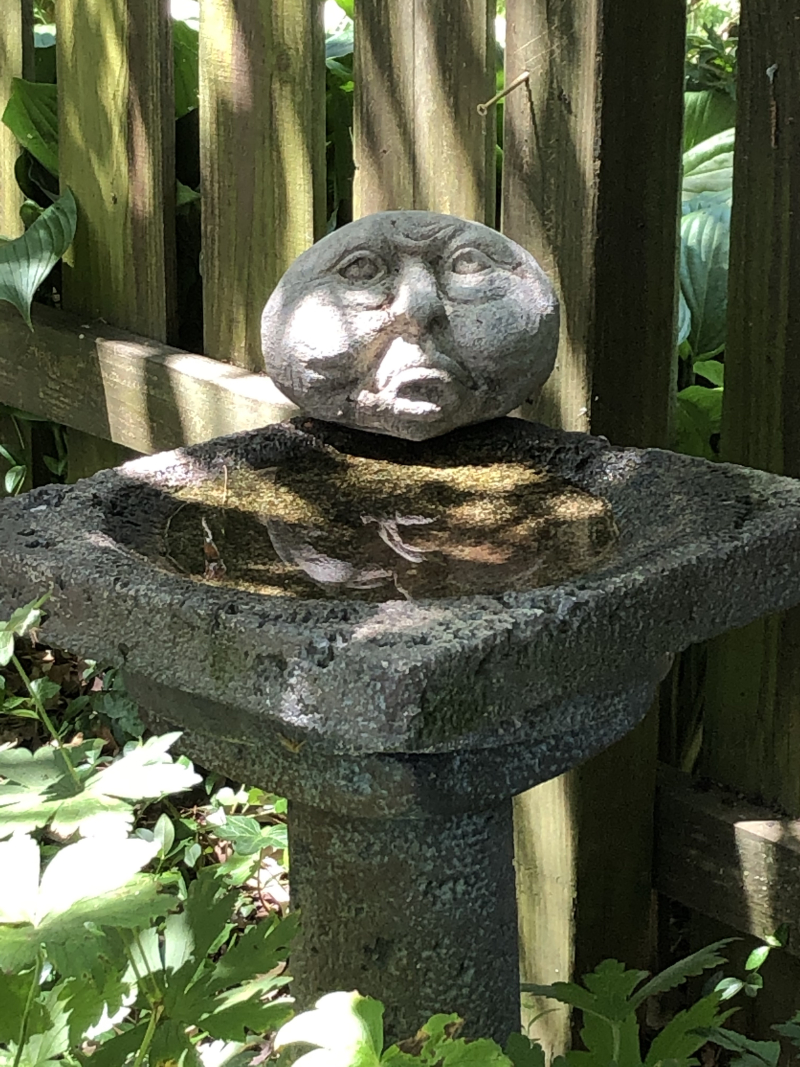 In the Weaver garden. 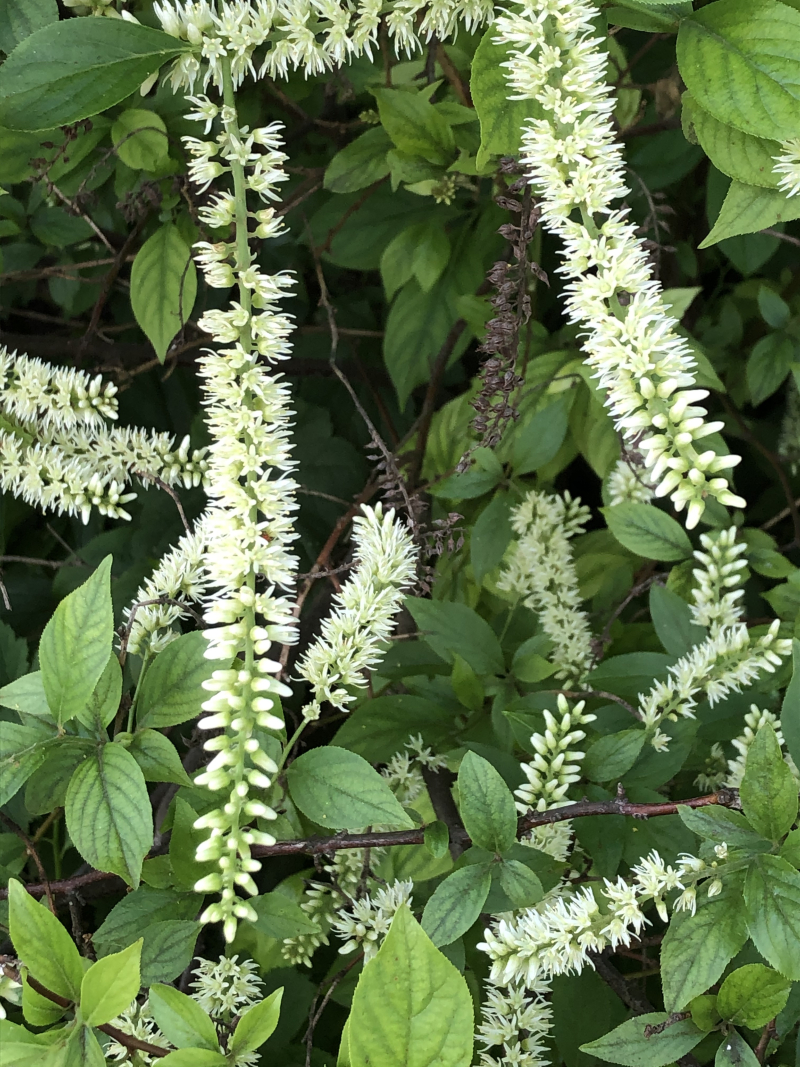 One of the best aspects of garden tours like this one is you get to see first-hand fine examples of plants that thrive in challenging areas, such as deep shade (above) or intense sunshine, like these native prickly pears. 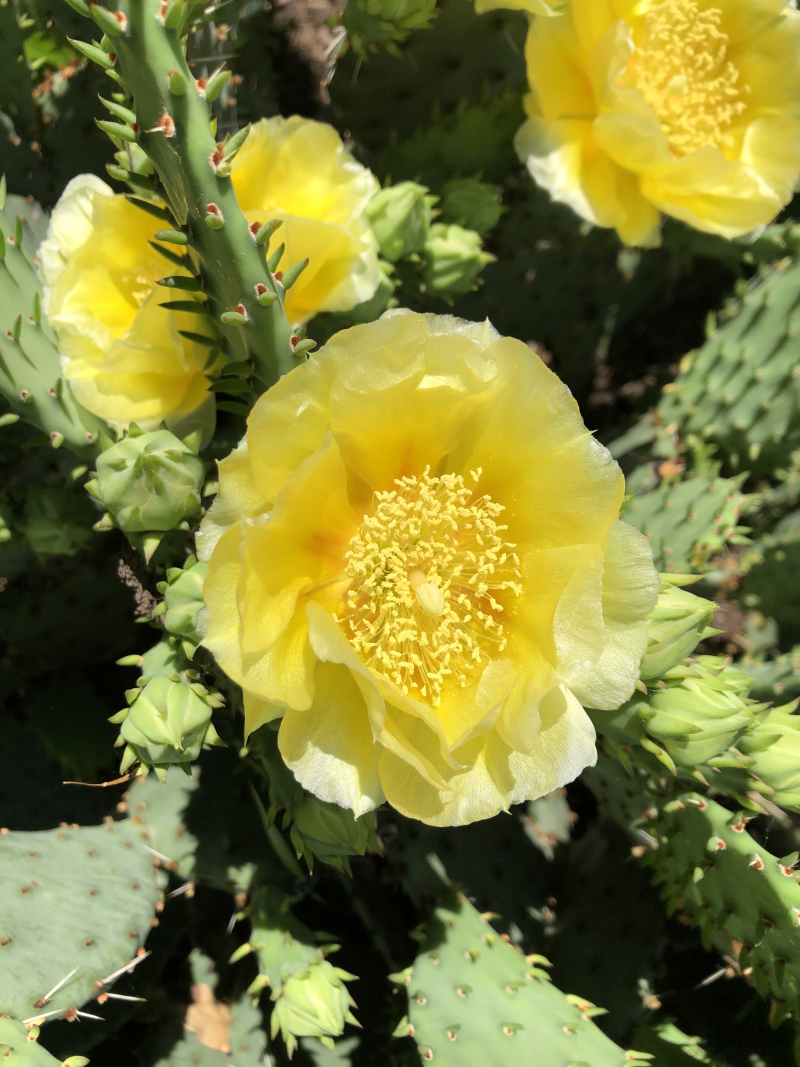 In the garden of Susan and René LaVoise.

While honeybees are not native to North America, it was cool to spot these beehives in the garden of Jim and Judy Stroup, where we started our tour. 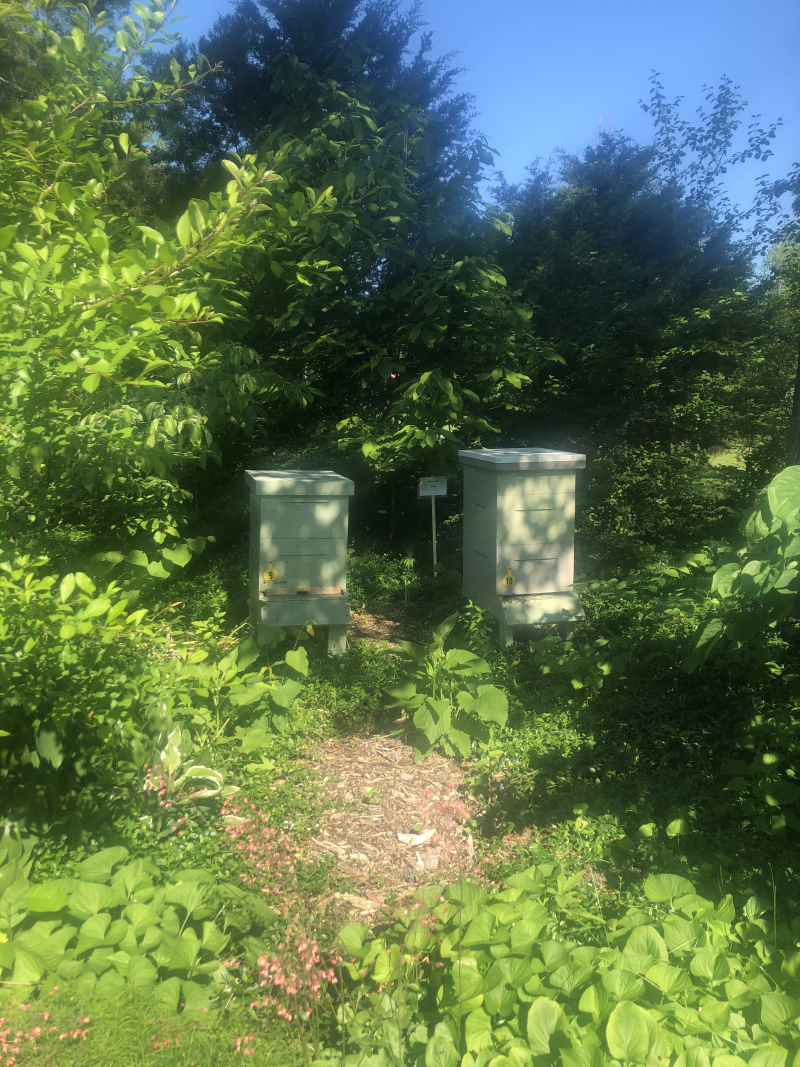 Beehives at the Stroup garden.

And last but certainly not least was the garden of Dave and Karen Tylka, avid conservationists whose gold-certified property features many a bee hotel in addition to bird bottles, bird and bat houses, and more than 30 woody native plant species and 95 wildflower species. A stunning array of bee hotels in the garden of Dave and Karen Tylka. 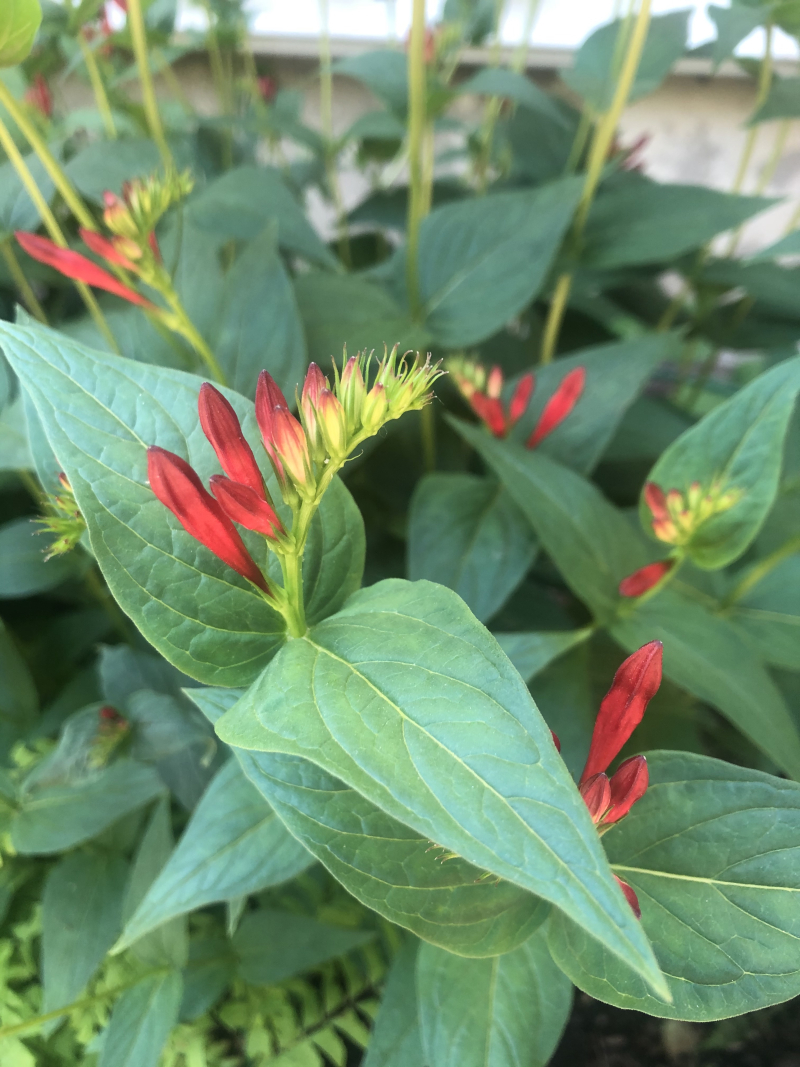 The common name of this native plant is 'Indian pink,' though it's neither pink nor from India! 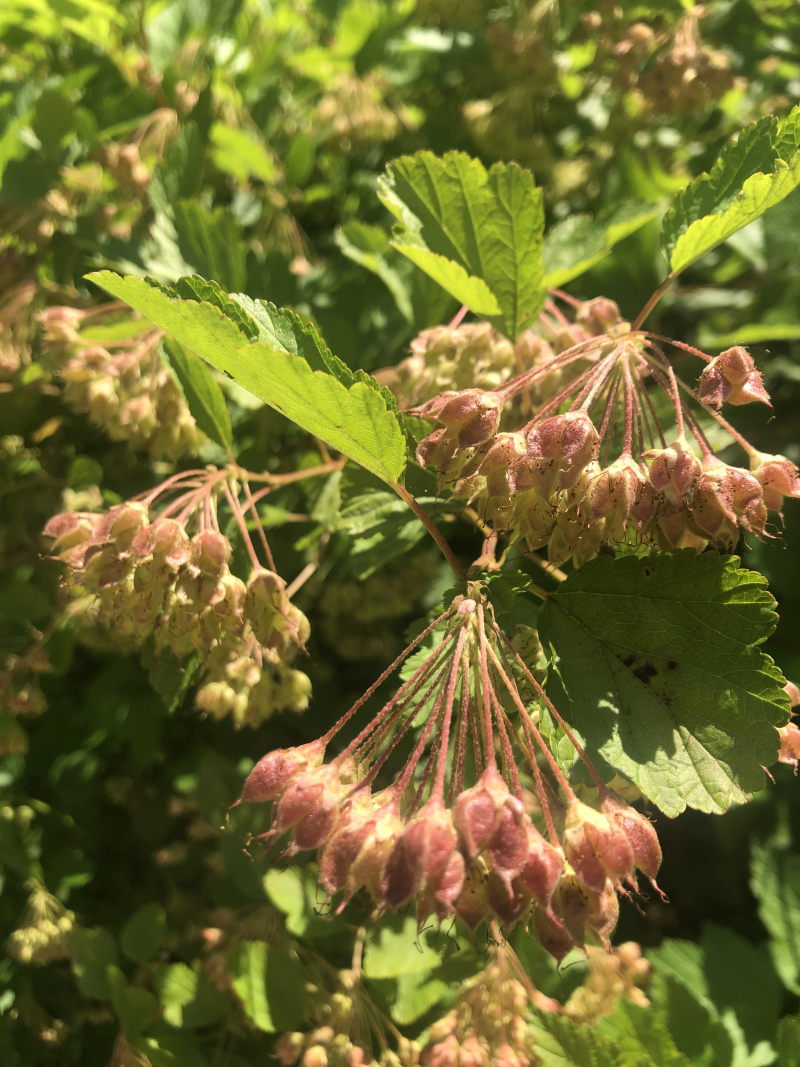 Ninebark growing in the Tylka garden. 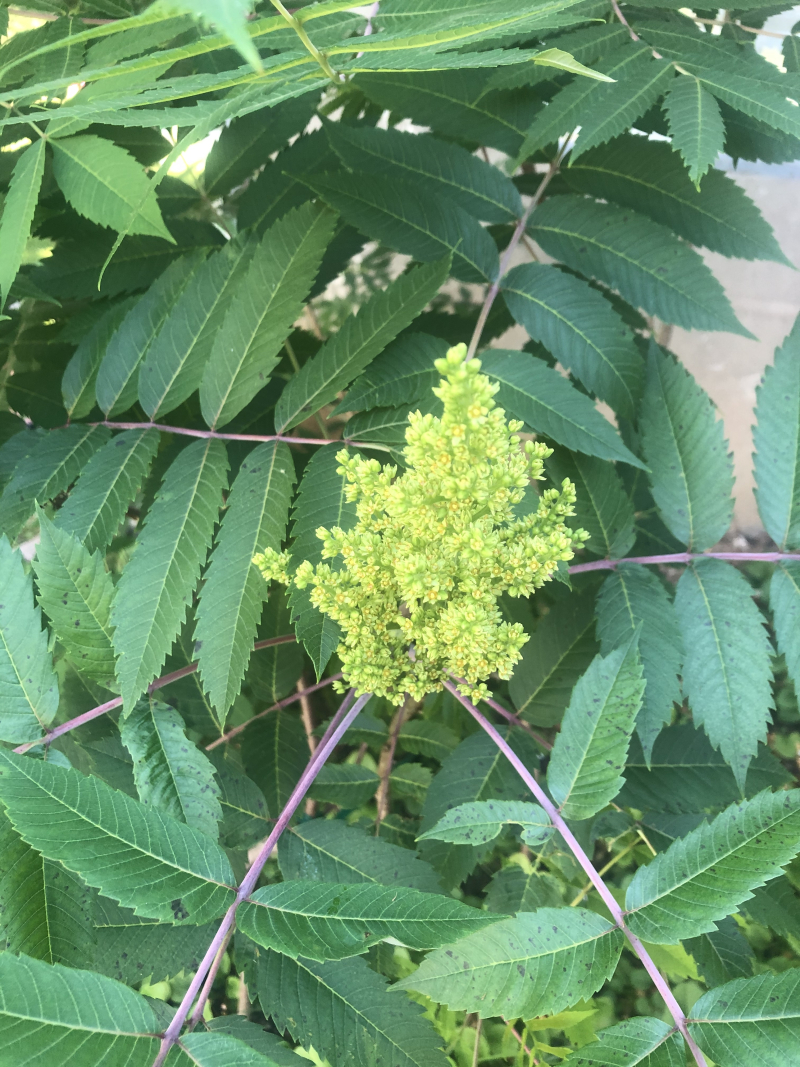 This smooth sumac grows in part-shade in the Tylka garden.

The Cat in the Flock Farm Goes Platinum!