The Trials and Triumphs of Sowing from Seed 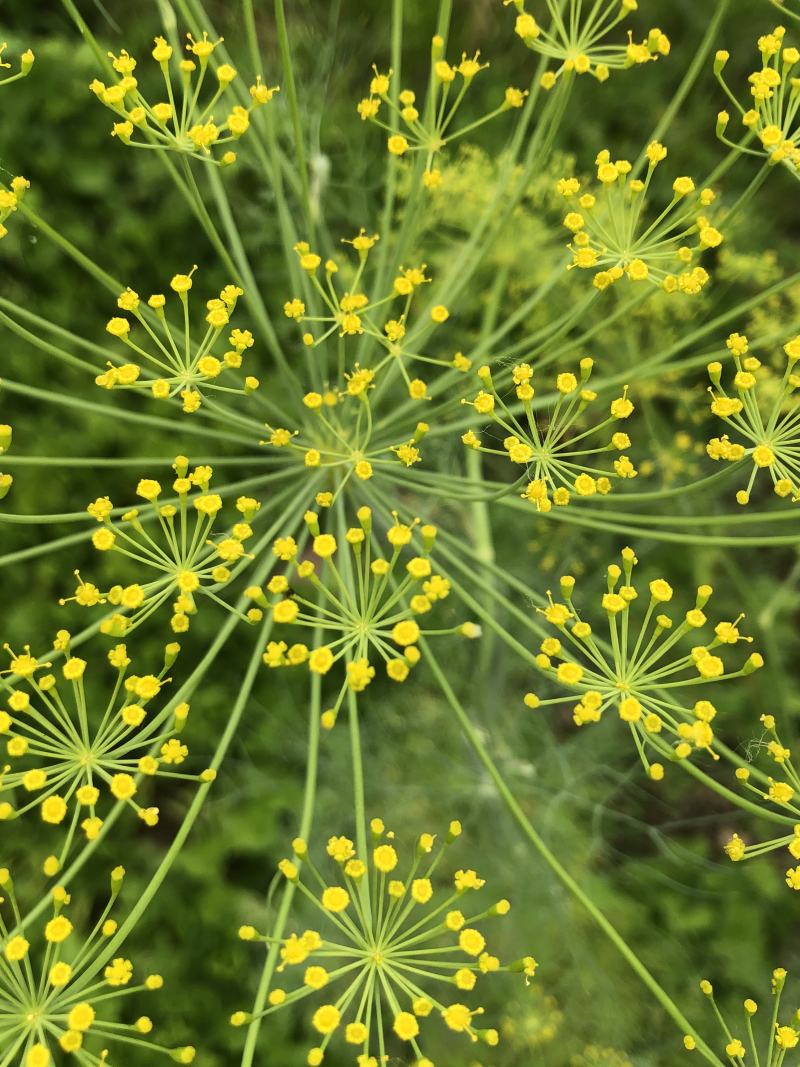 The umbels of dill flowers.

Every food plant you see pictured here in this post was grown from seed. Unfortunately, for every one of those, there's another plant that was supposed to have grown from seed but did not.

One of our bummers this summer is that only about half of the seeds sown this spring germinated. It's a good thing our survival didn't depend on the success of those seeds, or we'd have more than a pandemic and a constant stream of social outrage to worry about here in 2020.

Still, we're pretty thrilled with the Dragon Flower Farm all the same. We've had a bumper crop of kale from just one packet of seeds, and before the arugula bolted, it was mighty tasty. 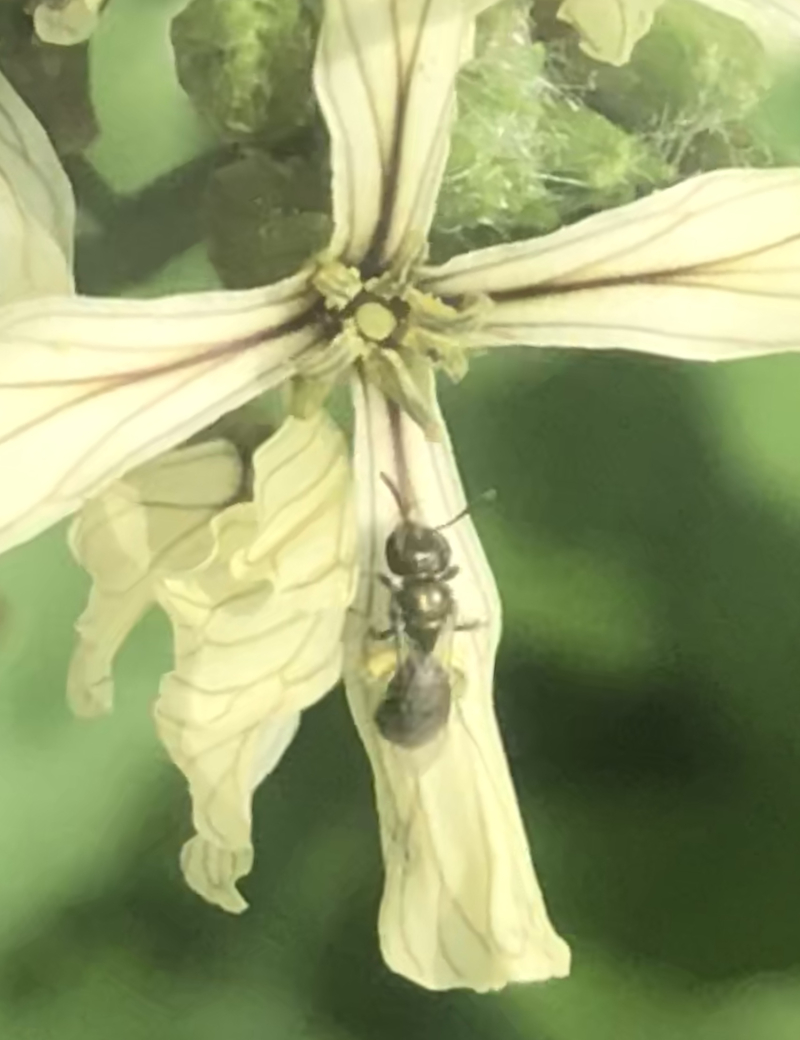 Seed sowing is a bit of a roller coaster ride. It's a thrill-a-minute to watch seedlings sprout up where you did nothing more than place a bit of fluff in the dirt. It seems audacious and incredible, and you wonder why everyone isn't putting seeds in the ground everywhere, every day. But when only maybe a few out of a whole packet germinates, it can feel like when you go on one of those rides that's so short, it's over before it even began. Is that it? You wonder. What did I do wrong? Even worse is when you carefully place a whole packet of seeds in the ground and get nothing, as if you waited in line for an hour only to have the ride shut down once you hit the turnstyle. 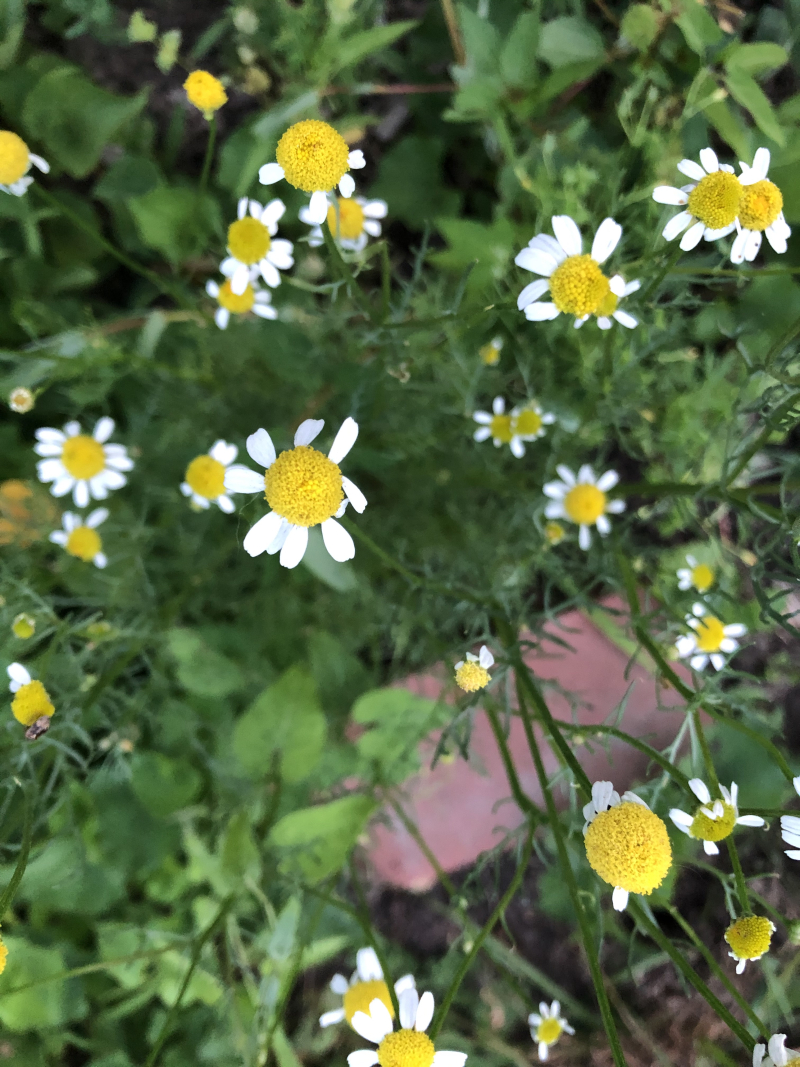 This was the first year I've ever set out to grow a substantial kitchen garden. All of my past gardening forays were either rehabilitative (I'm pretty good at rescuing f'd up landscapes) or cut short, as I left the gardens just as I was getting started (read about my lifetime of frequent moves here). I'm also doing things differently by fusing the native plant garden approach with permaculture techniques. So I expected to make a lot of mistakes, and to largely learn by doing. While there are a lot of books out there, for both native plant and permaculture gardening, so much of what you do is site-specific and theoretical. You're working with nature, too, and she's got a mind of her own. 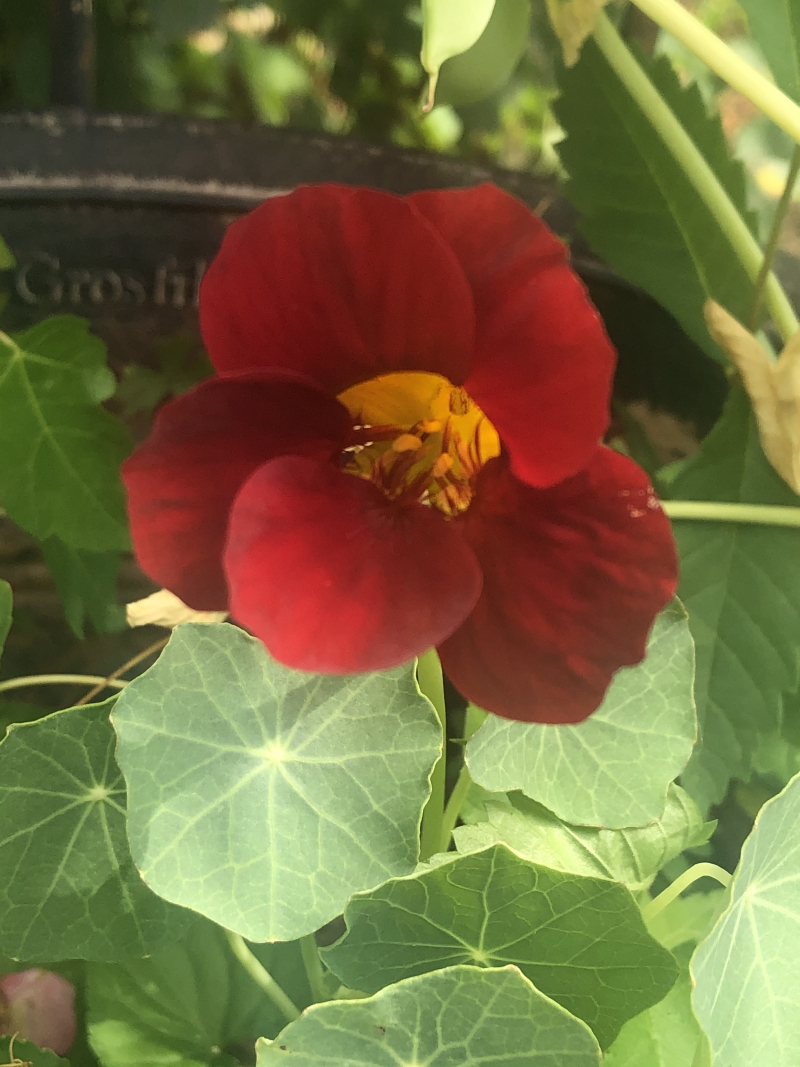 I've been puzzling over what went wrong and have a handful of lessons learned that I'll share here, as I still think sowing from seed is the move, in so many ways. It's tons cheaper, and if you get into seed saving, you pretty much have a continuous food loop without having to buy new seeds or plants. Don't let my dismal 50 percent success rate dissuade you; I'm not giving up by any means! But here's what I'm thinking about. 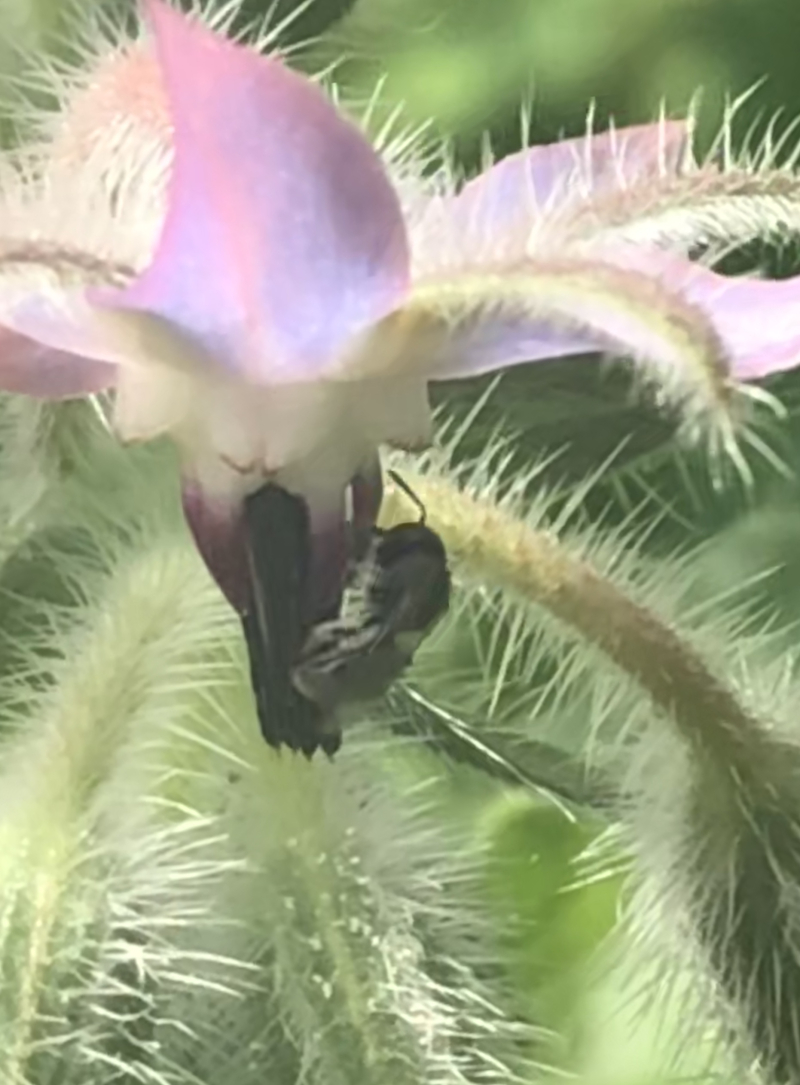 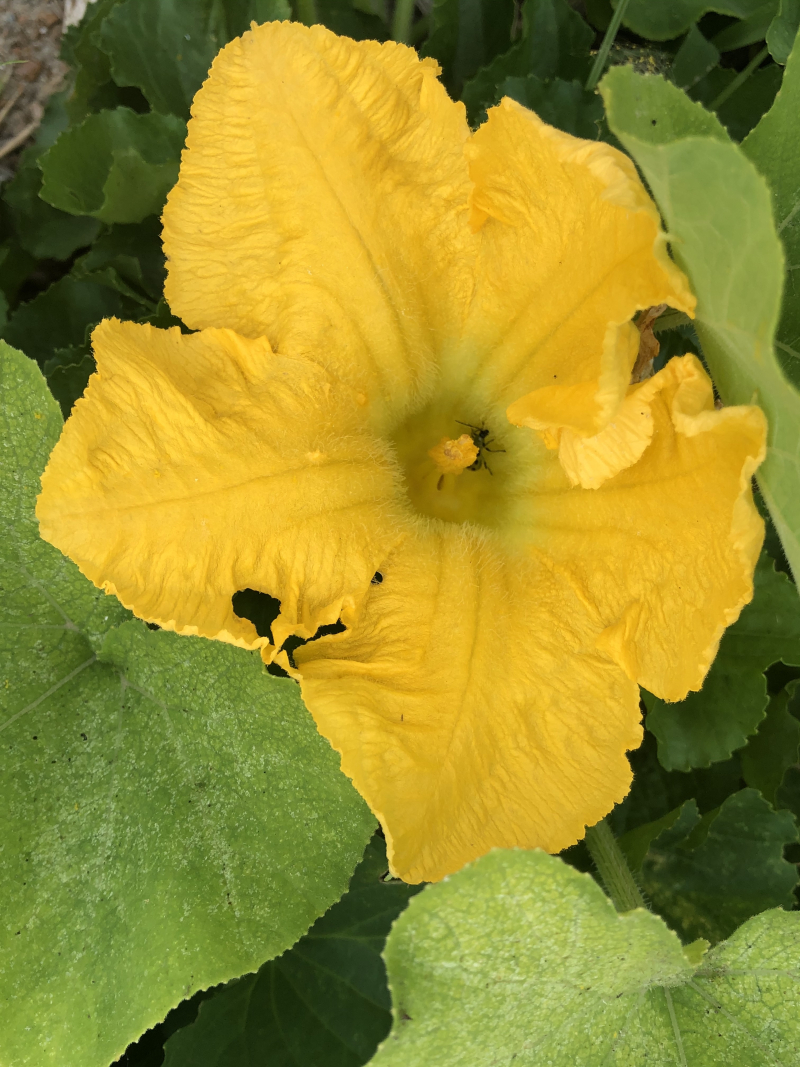 Sure, blame it on the cat, he says.

But the cool thing is, here in USDA Zone 6a, I've got another chance at the broccoli and carrots, starting... now. I've got more seed packets coming, my friends, and I know just what to do with them... At least, I think so? 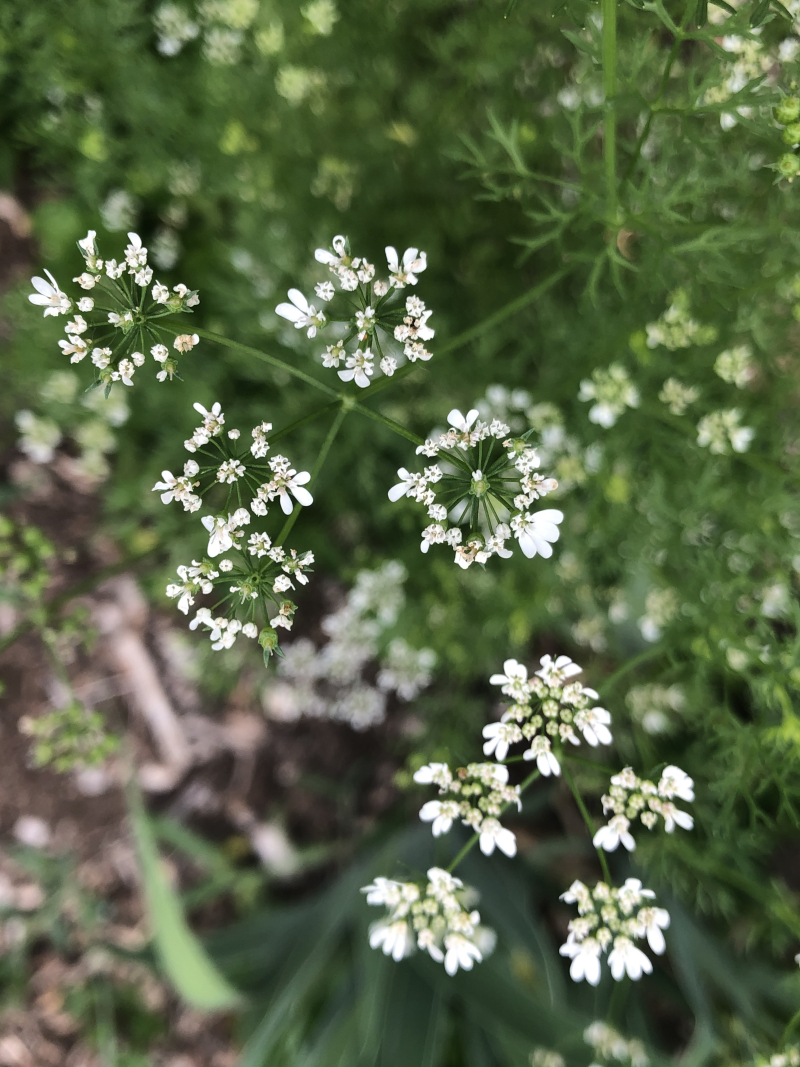 Want to Help Bees? Grow Your Own Food

How the Right Foods Can Help with Springtime Moods 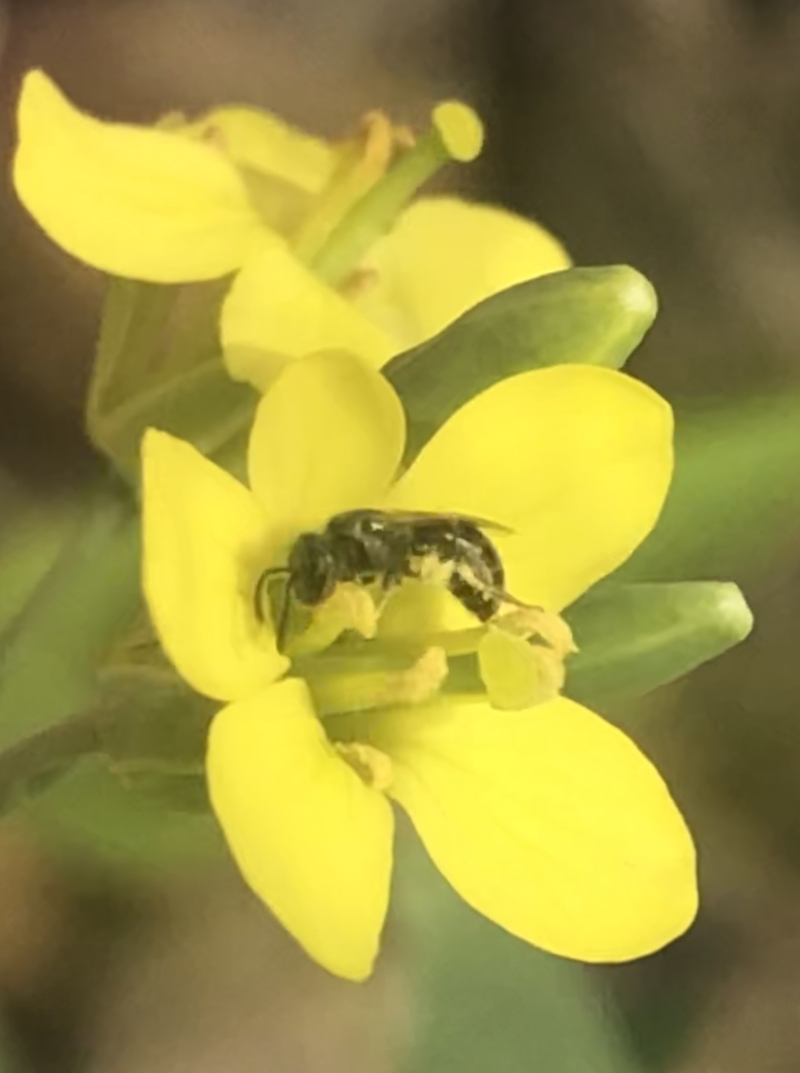 Anthony and I have considered carefully how much of the garden we want to allocate to native plants that aren't a direct food source for ourselves vs. traditional orchard and vegetable plants that do feed us. So far we've tried to learn as much as we can about native edibles and have designed the garden to include them.

But it was exciting to learn through the Shutterbee program (read more about that here) that native bees can make great use of traditional vegetable and herb flowers as a pollen source. That's right: As part of my training as a citizen scientist conducting bee studies in my own yard, I was instructed not to overlook the vegetable patch and herb garden. 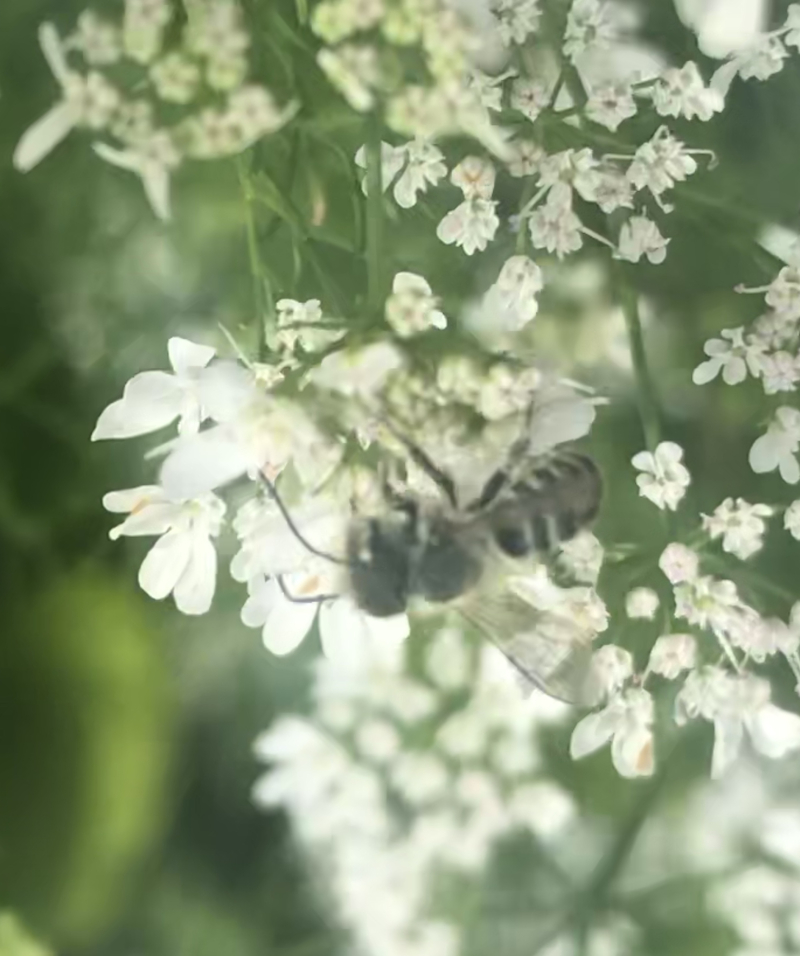 A bee on cilantro flowers

Most efforts to promote pollinator habitats focus on native flowers such as milkweed and coneflower, which are terrific additions to the garden that we've definitely incorporated. But this is the first I've heard that food plants could support native bees! That's an exciting finding because it means the annual vegetables we're growing get an added "stacked function." In permaculture, that means it has more than one use in the garden - here as both food source for us and a pollen and nectar source for bees. There's even a specialized 'squash bee' that is so-named because it prefers the flowers of squash plants.

For my first official foray into the farmyard to record bees, I was pleased to find that indeed, native bees were busy taking advantage of the flowering vegetable plants. I'd left the arugula standing when it bolted in the summer heat, and it's popular with tiny sweat bees. 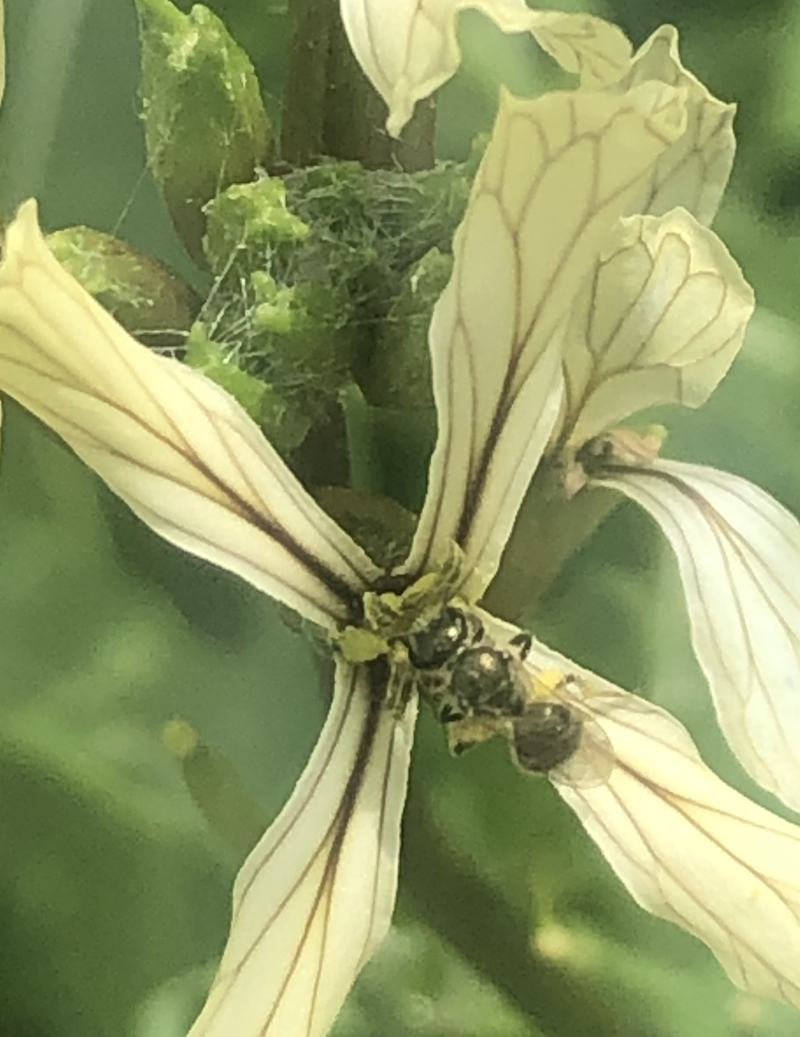 So that's one more compelling reason to grow food in your yard. The list was already pretty long, but here's what we've got now. By growing your own food, you will: 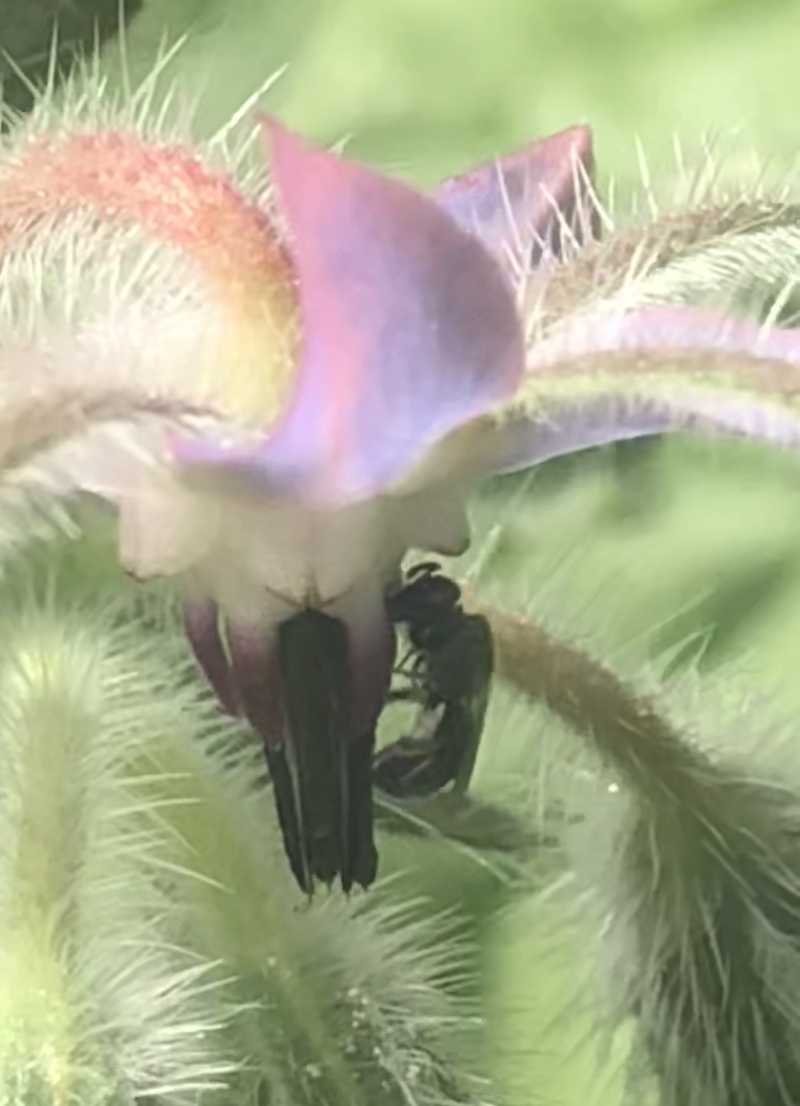 Bee on borage flower, an edible bloom that tastes like cucumber - I use it in salads and to flavor water

Of course, if you want pollinators to take advantage of the flowers, you need to leave them there. The broccoli I started from seed indoors mostly faltered, but a few took off, and then quickly bolted (next year, we try a different approach). The flowers are pretty, so why not let them go? Ditto the chervil and arugula, both of which love cool weather and are pretty much done now that it's 90+ degrees here in June. That reminds me, the arugula is about to go to seed, so I better get out there and snag the remaining leaves... 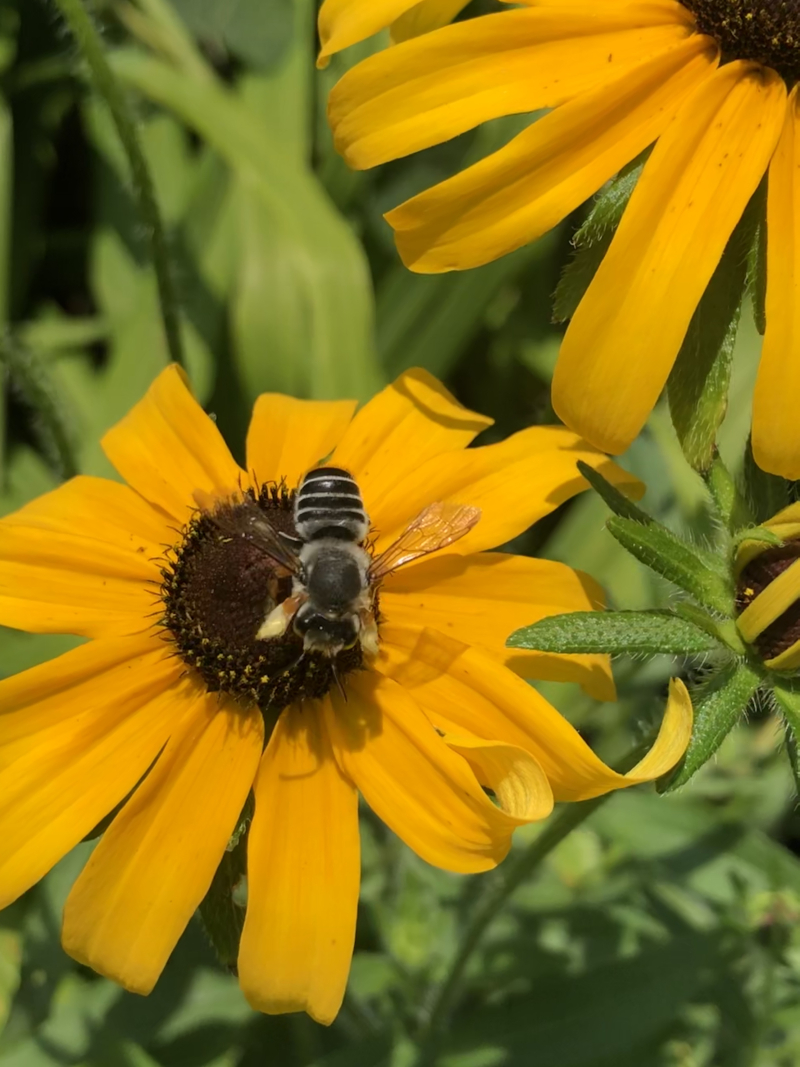 A leafcutter bee on our yellow coneflower.

This spring I joined with 186 other participants in a research project called Shutterbee. Without needing to meet in person, we will conduct a study of the bee populations in our gardens. It basically works like this:

I've already gone through the two-stage training sessions, about five hours of education and practice spread over two weekends. Due to COVID-19, the trainings were held online, making this low-touch research project even less-touch. Researchers at Webster University and Saint Louis University are trying to determine whether non-invasive photo surveys can adequately take the place of traditional netting. Normally, bee researchers head out into the field, capturing bees with nets for study. This project explores whether or not photo surveys by citizen scientists can take the place of netting, or at least contribute to it. This bee on wild garlic is still awaiting ID.

The answer to that seems to lie with us, the program participants. Based on previous years, what researchers have seen is that while the richness and diversity of bee recordings carries across to the citizen scientist findings, we amateurs in the field often miss the rare bee sightings. So Shutterbee has asked us to keep an eye out for bees that seem to break the bee mold, so to speak. For me, being a good citizen scientist means learning as much as I can to think and act like an ecologist, getting to know the bees in my garden and the plants they prefer. 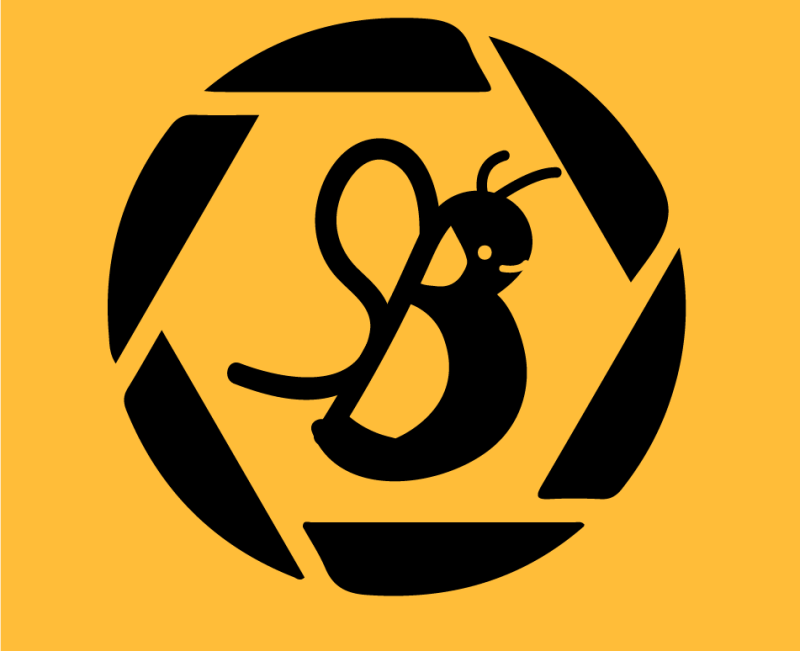 The Shutterbee logo, designed by students at Webster University.

The focus of this study is native bees, not the honeybee, which is a non-native, domesticated insect considered by many to fall into the livestock category. While colony collapse disorder in the European honeybee population is of concern to agriculture, it's the decline in native bee populations that fuels this research project. Native pollinators are important because: 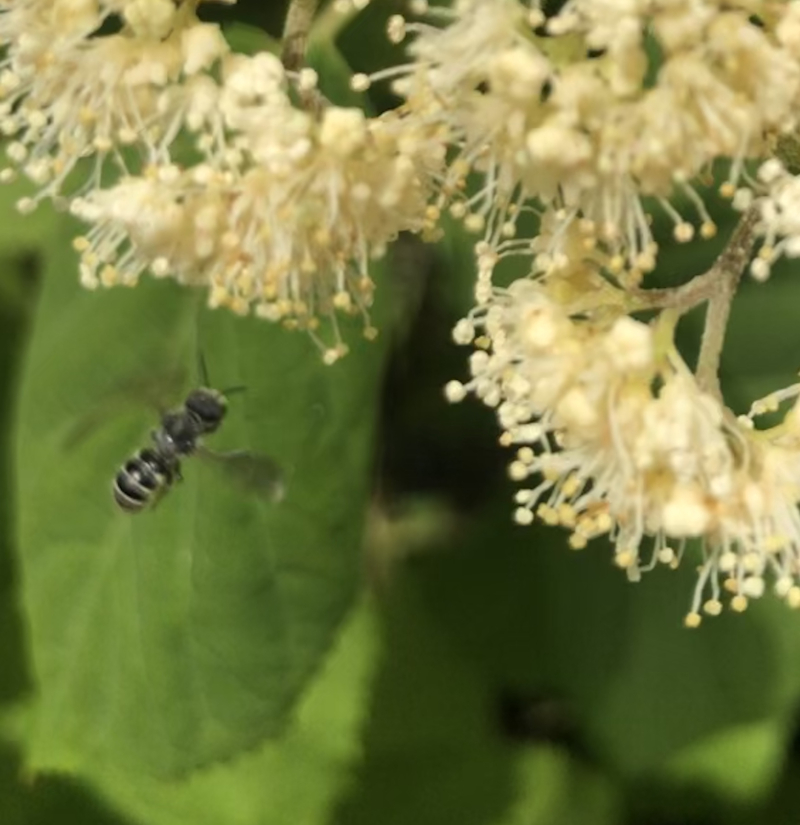 A native bee in the family Megachilidae, on wild hydrangea.

I've already learned a lot from this study, such as how to tell bees from flies or wasps. You might think that's a simple task, but you should think again. Many flies have evolved to mimic the look of bees as a defensive mechanism. 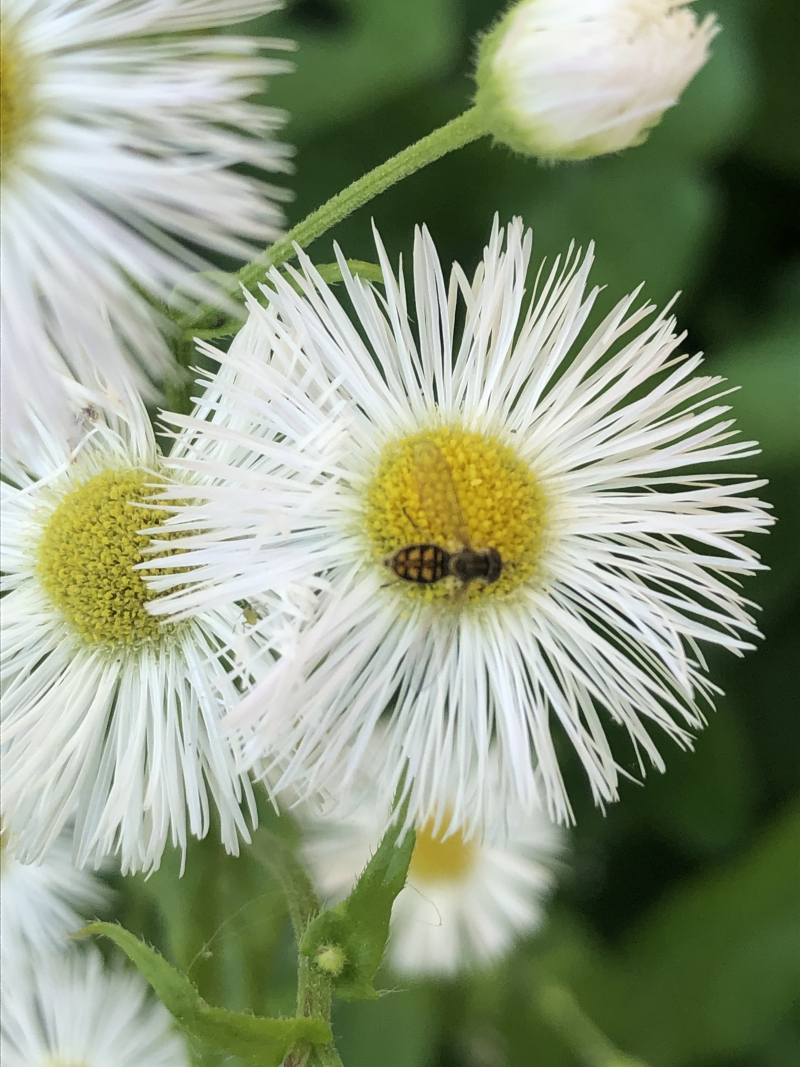 Looks like a bee, but it's a hoverfly called 'margined calligrapher,' here on daisy fleabane growing in our wild patch.

After a few test-walks through the garden, I've also learned that all the work to remove invasive plants and exotics and replace them with native plants is worth it. During my surveys, it was the flowering natives that drew the bees for me to photograph, as shown in all of the photos on this page.

I'm excited to take part in this program, offered jointly by Webster University and Saint Louis University. I served as visiting professor in the game design department at Webster during the 2017-18 school year, and one of my students was our first full-time hire at Brunette Games. Not only is Saint Louis University my undergrad alma mater, but we also recently hired two more students from SLU's English department to our Brunette Games staff. 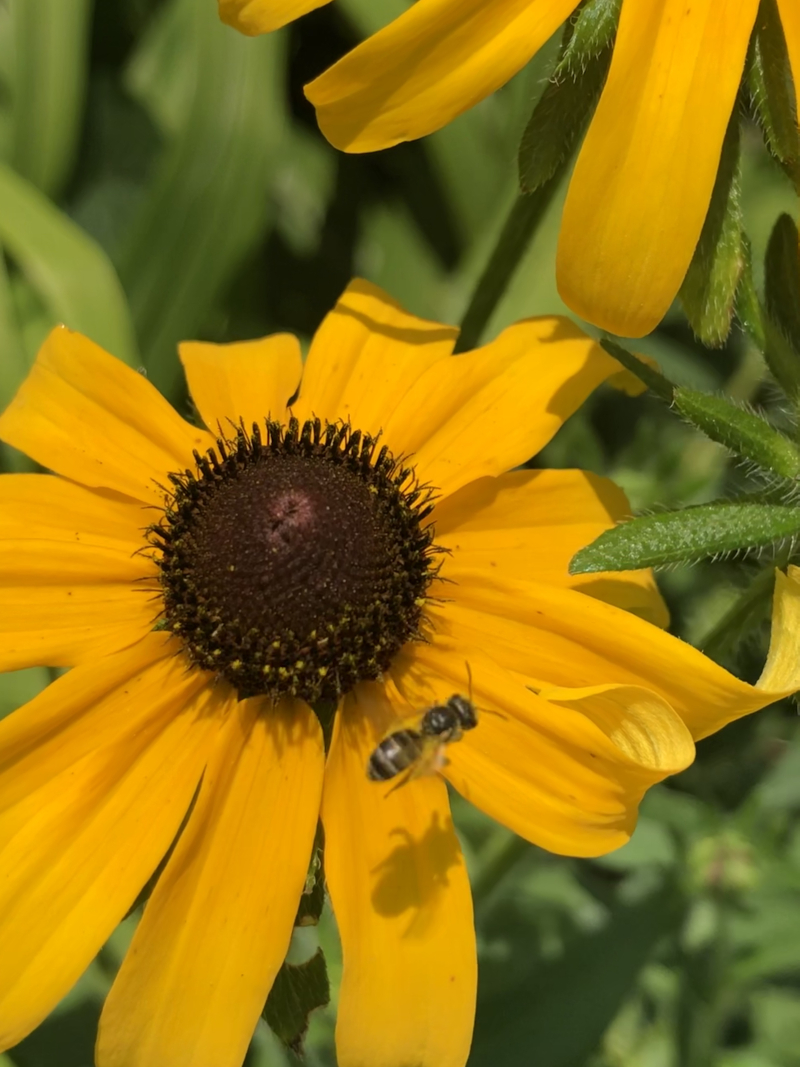 The yellow coneflower is popular. This visitor is a ligated furrow bee.

Professor Nicole Miller-Struttmann has been an awesome educator and evangelist so far in her leadership of Shutterbee, and I look forward to meeting everyone in the program in person, hopefully, in the future. If you're in the St. Louis area and interested in participating, you still can next year. While the program is at capacity for now, it's a multi-year study, and Shutterbee plans to train more people in 2021.

What's buzzing in your garden? Post your bee pics below!

* According to educational materials distributed by Shutterbee.