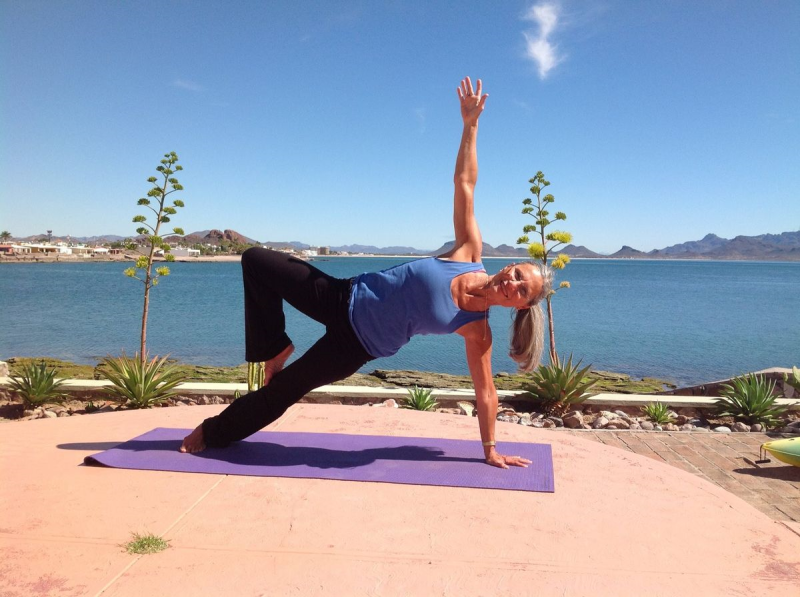 Cherie Althauser, teaching yoga with the Sea of Cortez as backdrop. All photos courtesy of Cherie. Video by me.

I named the Granny Grace Award for Outstanding Women Over 40 after a trailblazing character in my Dreamslippers mystery series. Cherie Althauser could play her in the movie version.

Like Granny Grace, Cherie is an accomplished yogi who's committed to a spiritual path. I met Cherie when she taught a class called "Chair Yoga" at Embody, a gem of a studio in my adopted new locale. The inspiration for Chair Yoga came from Cherie's study of Iyengar yoga, which pioneered the use of props to help students get into postures correctly and safely.

As an experienced yogi, I was deeply impressed with Cherie's use of the chair to give students support--without sacrificing challenge. I took the class because I'd sprained my ankle. I made it through the class without any pain but left sweaty and feeling invigorated. It was especially fun to practice wheel pose using the chair.

Something Cherie said that day stayed with me: "All movement with intention is yoga."

Cherie's focus on movement began in childhood with ballet. She maintains she was never interested in the performance aspects of ballet, but she practiced it as a child and then returned to it for exercise as an adult. Now she applies her ballet training to teaching yoga. She explains: "In ballet, you learn that a movement can express itself from the core of your body out through the hands and feet. It's the same with yoga." 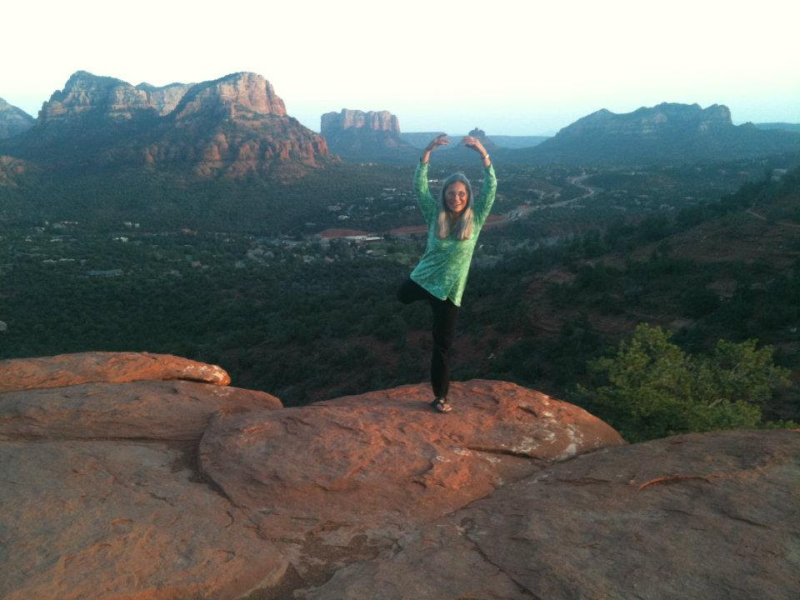 Cherie in arabesque on the edge of a cliff near Sedona, AZ.

It's clear that Cherie brings diverse movement experience and training to the mat. In addition to Iyengar, she has studied a little Rolfing and Feldenkrais, both methods that focus on movement in order to heal or retrain the body. "I'm interested in how the body moves through life," she explains. "Yoga is the platform."

But movement alone would not be enough to sustain Cherie's path, which is also a spiritual one. In 2004, she came to a fork in the road that lead her to engage in spiritual research. "My whole life turned upside-down," she says. "I had a quantum change experience. I had a vision." She read books on religion and spirituality, reaching out to the authors when she had questions.

Eventually, this brought her to a guru, Paramahansa Yogananda, and provided structure for her spiritual path in the form of the Self-Realization Fellowship. Cherie, who strikes me as level-headed and practical, says she was highly skeptical at first, wary of being drawn into a "cult." But she learned to meditate, which she and her husband do together now twice daily, and she returns to the Yogananda center in Los Angeles each year to check in with others on the spiritual path.

Cherie has taken up playing the harmonium and is committed to learning all of Yogananda's songs. She sometimes ends her yoga classes with a short concert.

In the U.S. the term "guru" can often have a negative connotation, as someone who exploits his position at the helm of a community of slavish followers. In stark contrast is the way that Cherie herself conducts class: with a sense of humor, as well as humility. She never takes herself too seriously. "Let's do...whatever that pose is called, something in sanskrit; I forget," she'll say. Or this: "You might want to grab onto your chair, as I'm going to, since I'm the one losing my balance." Her teaching reminds me that at its root, "guru" simply means "teacher," or better yet, "guide."

Undoubtedly her yoga instruction is grounded in her longtime career as a teacher and then program manager for the Child and Family Studies department at Centralia College, where she worked for more than 15 years. "The divine has always placed me in the role of teacher," she explains. But this role didn't come naturally. Cherie describes herself as intensely shy, admitting that this call to teach pushed her outside her comfort zone, again and again.

Her first encounter with the Child and Family Studies department came after she gave birth to twins and found herself feeling unsure as a mother. She tried to remember that when she taught, and then again when she supervised other teachers.

At 65, Cherie is an inspiration for anyone looking for such an age to be filled with vitality and well-being. She shares this gift with others, both in Centralia and when she winters in San Carlos, Mexico, where she teaches English to underprivileged children, as well as yoga to retirees. 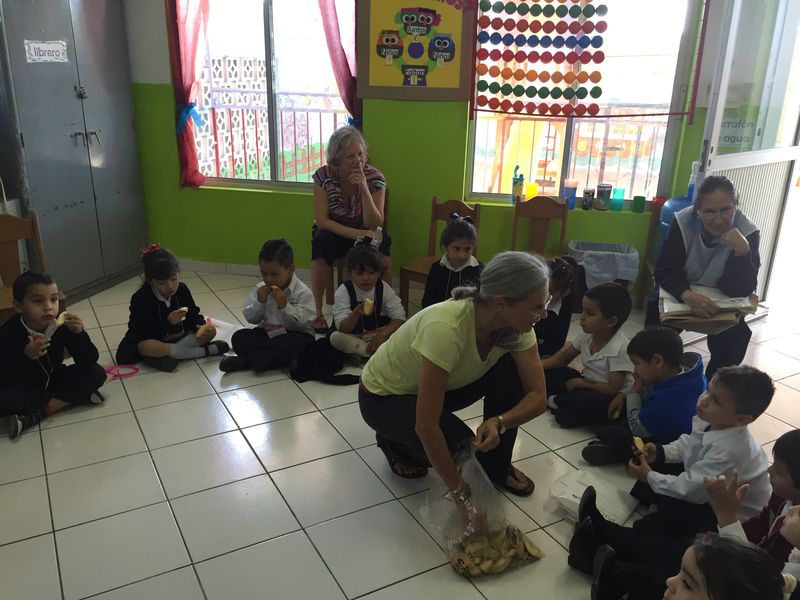 When asked what advice she'd give to others, Cherie answers, "Learn how to nurture your intuition. Learn how to hear it. Cultivate a close relationship with the divine, whatever that means to you. It's speaking all the time. You don't want to miss it."

Introducing the First Winner of a "Granny" - the Granny Grace Award for Outstanding Women Over 40! 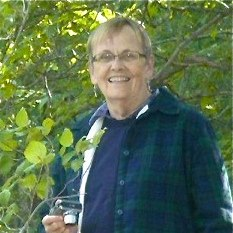 We often obsess over youthful achievement in our society, but I think it's more important to recognize what a person accomplishes over the long haul. Not everyone has the opportunity to publish in their twenties, for example, and some choose motherhood first or the responsibilities of working and paying off student loans before they feel they can follow their dreams. This is especially true for women, who even today more often have to make the choice to put their creative endeavors on the back burner.

My first "Granny" recipient is fellow mystery writer Karen Musser Nortman. She's the author of a clever series of campground mysteries that deliver murder and mayhem along with helpful camping tips. The Frannie Shoemaker series is at Book No. 4 and counting, and Nortman received an indieBRAG medallion for all four. Book No. 2, The Blue Coyote, was a finalist in the Chanticleer 2013 CLUE awards.

I reviewed Book No. 1, Bats and Bones, here. It's a must-read for anyone who loves to camp, especially if you're interested in "glamping," or glamor camping. For those of us who enjoy learning new skills best when they're wrapped around a compelling story line, this is the perfect book. And mystery fiends will enjoy the well-crafted whodunit.

Frannie Shoemaker is a great heroine. Neither detective nor cop, she nonetheless has a mind for motive and can't help being drawn into solving whatever case presents itself to her on the hiking trail.

And Karen hasn't stopped there: Her recent endeavor is a time-travel novel. The most amazing thing about Karen is that she launched this--her third career--entirely as an indie. Her craft, quality, and professionalism as a self-published author stand out as best-in-the-business and no doubt come from a lifetime of experience.

Her first career was as a social studies teacher, a job she held for 22 years. She says this is the hardest thing she's ever done. "I am by nature more introvert than extrovert, and those first years were a real challenge. I was very lucky that my first class was an outstanding group and not out for blood. Writing a book by contrast was a walk in the park."

For another 18 years, she was a test developer. The two of us first struck up a conversation, as a matter of fact, over a case Granny Grace pursues in Cat in the Flock, when she investigates a fraudulent ACT test. (Thankfully, my research passed Karen's muster.) But retiring from test development didn't mark the end of Karen's working life. "I knew I couldn't be done yet, because in fourth grade, I had decided to be a writer," she says.

Her lifelong dream to be a writer hitched up with her passion for camping, and a series was born. She explains:

A love of mysteries combined with our avocation of camping provided the inspiration for the Franny Shoemaker campground mysteries. My husband Butch and I originally tent camped when our children were young and switched to a travel trailer a few years back when sleeping on the ground lost its romantic adventure.

Karen has been especially pleased with how her books have reached a wider audience. She got a note from someone in Australia who heard about her books in an Australian campground, and she's built a network of friends around the U.S., fellow campers who sought her out after reading her books. She says, "One is always pleased, of course, to have friends and family read one's books, but it is uniquely gratifying to hear from complete strangers."

What's the most amazing thing that's ever happened to Karen? Her family. "Even though our children went though lots of teenaged and twenty-something turmoil, they are all now caring, responsible adults and have given us eight delightful grandchildren, four of whom are also adults," she says. "I am especially proud that they are all active volunteers in various causes."

Congratulations to Karen Musser Nortman, and happy trails to all her readers.