Take a Cue from the Spanish Lifestyle

Imagine a daily lunch that isn't spent eating microwaved food at your desk or rushed at a fast-food place but instead unfolds over the space of two hours, between 2 and 4 in the afternoon, spent in the company of friends and family. This lunch includes wine and good, local food made from scratch, and it ends with fruit for dessert and the most amazing espresso you've ever sipped. No one's rushing or checking their watches. Everyone's laughing and talking and taking their time.

Before this 2 pm lunch extravaganza, you might have had a sandwich snack around 11 at a local street cafe, with that glorious coffee, or maybe a pastry. Maybe that was the second time you ate that day, depending on when you got up, which didn't have to be early. 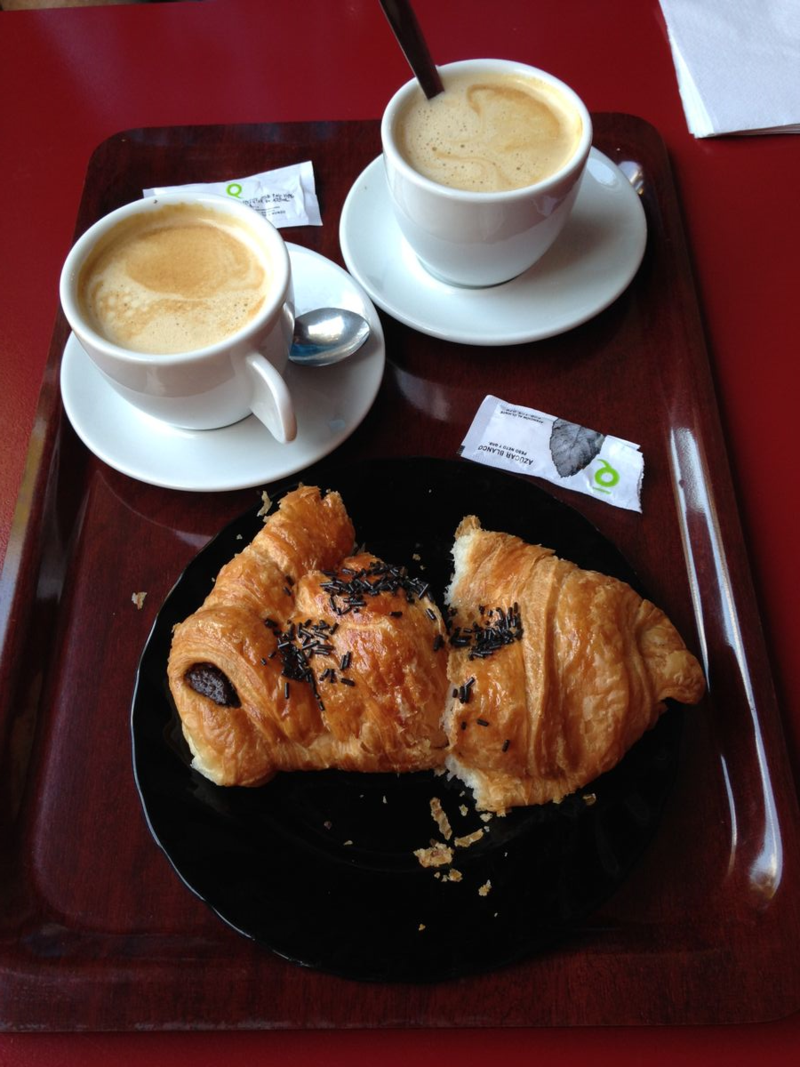 After this 2 pm lunch siesta, you go back to work for another two or three hours, heading home around 6 or 7, when you might have a snack. Dinner then is as leisurely paced as the lunch was, maybe even more so, and it doesn't start till at least 9.

Adding the Spanish work day up, I'm getting about 5 hours of actual work. To Americans, this probably sounds appalling. But after working like a dog for 25 years, the Spanish work/life balance seems much more civilized to me.

And so is what they eat. It's hard to find a fast-food place in Barcelona; they're all clustered around tourist attractions for a reason. Most of what you find to eat in Spain came from a farm or ranch nearby, and is presented in its close-to-original state, like the famous Iberian ham, carved right off the shank. 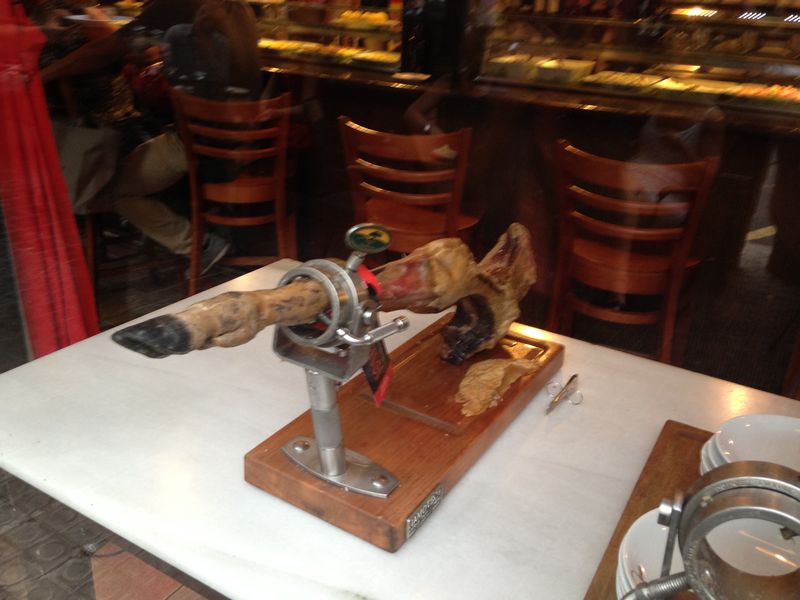 During my recent trip to Barcelona, all of my admittedly low-grade, not-serious-but-annoying digestive issues entirely cleared up. Sure, it was in part due to the fact that I was away from daily work stress, walking every day, and breathing in warm, Mediterranean breezes, but I happen to think the food - and a radically different food culture - had something to do with it.

For one thing, it's hard to argue with black squid ink paella...

Or seafood soup. (And in the background, there's a right-sized dish of homemade ravioli. Next to it, a bottle of wine, which came with the meal, all for far less than we'd pay in Seattle.)

For another thing, the amazing artisanal yogurt pictured below seemed to heal my gut in the space of a week. We imagined it was made from milk gently and humanely harvested from Pyrrenese cows who enjoy daily massage and are sung to by maidens playing lyres. 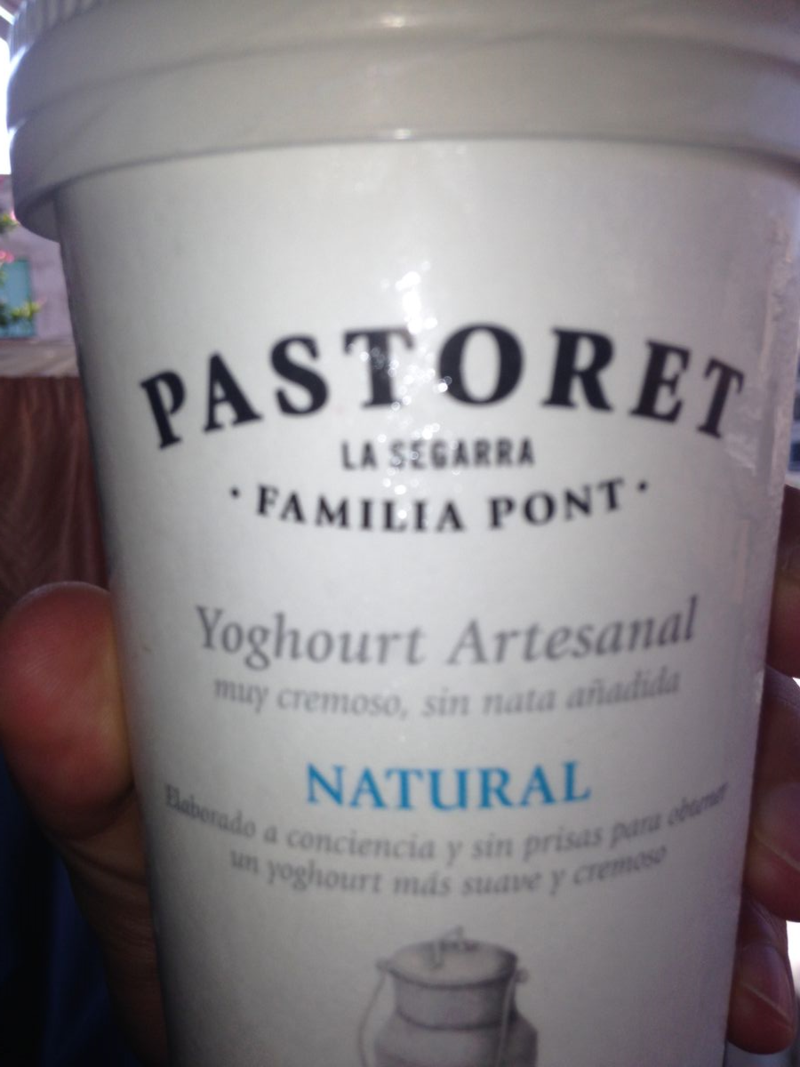 Next door to our apartment was one of many fresh food markets throughout the city, which is where most people shop. The procuring of food is not a chore done in one large mega-trip to a mega-store but rather woven into the fabric of your life, so that you're stopping in for fresh produce, meat, dairy, and bread as part of your daily walk route, and taking the time to chat with the vendors. There are small stores resembling the grocery stores in the States, but even they have barely any processed foods. For bread, you go to a bakery. For toiletries, you visit a farmacia.

In the U.S., we're too prone to taking the quick route, turning our fad-food-of-the-moment into something packaged, with a long shelf life. Just think about the section now devoted to "gluten-free" packaged food in a lot of stores lately. As detailed in this New Yorker piece, gluten-free does not usually mean healthy.

Unless you have a true food allergy or celiac disease, restrictive diets like the gluten-free one probably won't cure all that ails you. Believe me - I've tried them. I was a vegetarian for 13 years, and about half of that included stints of true veganism. I tried the wheat-free thing back in the 90s before the word "gluten" was used by anyone but nutritionists. I've gone fat-free, egg-free, and paleo. These diets might make you feel better for a short time, as you tend to be more mindful of what you're eating and avoid gut triggers like fried food and alcohol, but they inevitably lead to further restrictions, frustrations, and failure.

In Barcelona, we cooked frequently, used fresh ingredients, didn't eat anything processed, and were the better for it. We also spent less money on everything, but especially cheese and meat, than we do in Seattle. We ate everything, and we still lost weight. 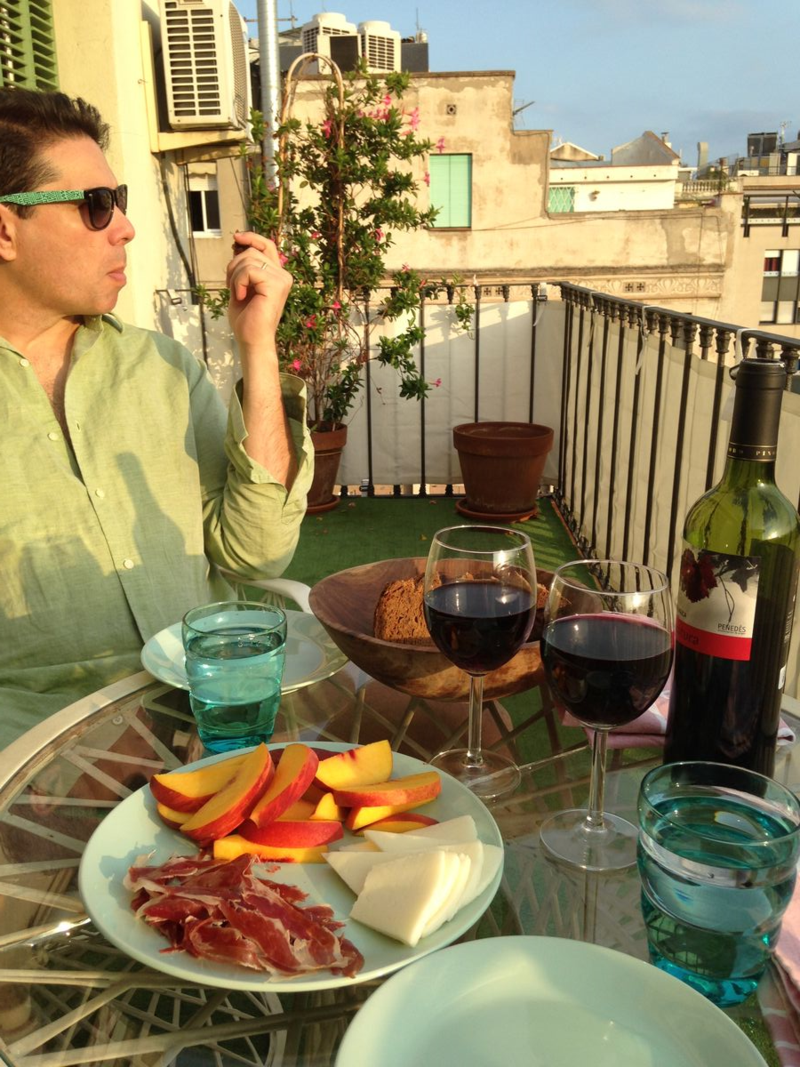 What seems to be the key is admittedly harder than simply cutting out a particular food, and that's eating as a truly healthy omnivore. Supporting that would be a less stressful culture and much better work/life balance.

Good, local food and dishes made from scratch, eaten at a leisurely pace in the company of friends and family, and a working lifestyle that supports it. I know some of you are probably thinking right now about Spain's economy and saying to yourself that their lifestyle is to blame, but I'm not convinced of that. I don't believe it's necessary to sacrifice our personal health and well-being for the sake of the health and well-being of our economy. That doesn't seem like a logical correlation.

It's no accident that one of the chief tourist attractions in Barcelona is La Boqueria, an incredible food market where local food artisans have been hawking their goods for centuries. 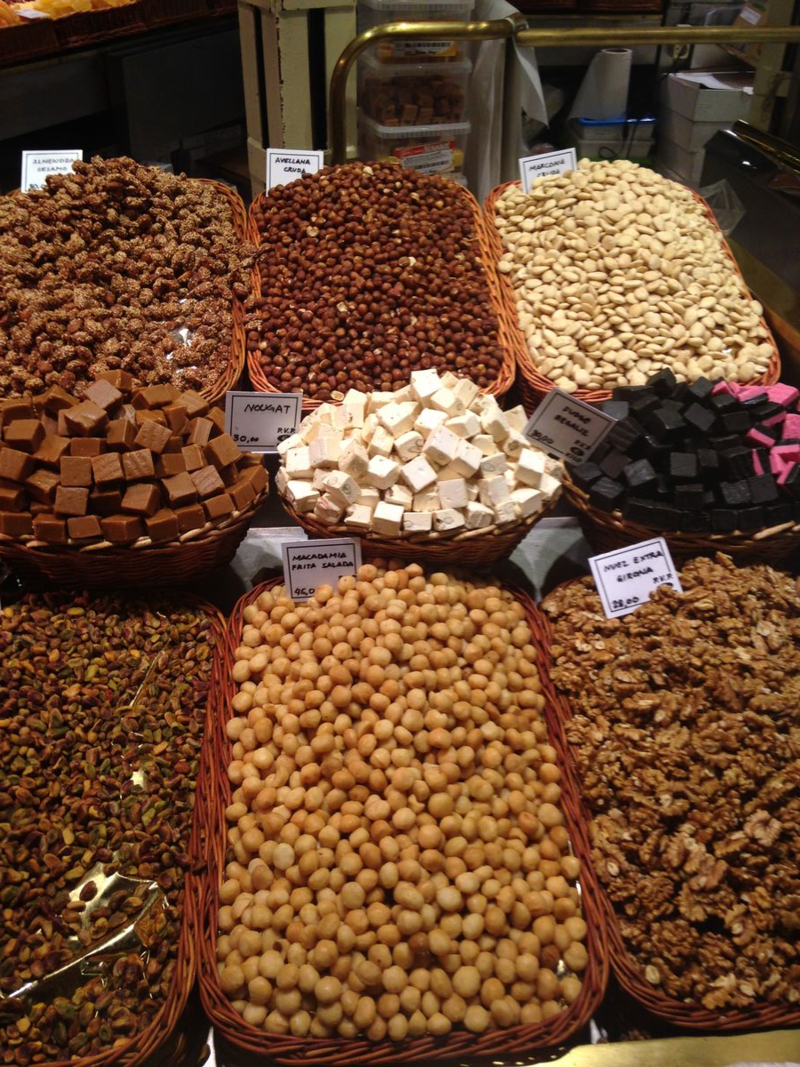 Since I've been back in the States, I've tried to replicate the Spanish way of eating, with mixed success. It requires carrying a lot of food with me for the long work day, and I still eat at my desk, which is the only way I can fit in a workout. And yesterday the organic farm we subscribe to delivered its last box of the season. Since I didn't have the time to can, dry, and freeze the summer's bounty of foods, I'm trying not to panic.

What's your food story? Tell me all about it.

Quite possibly the most frightening thing to see in Barcelona.

Does the reflection of my foot in the window make it better... or worse?

Things That Should Never Be Localized

I'm starting a new series to showcase items that haven't been "localized," or further translated from their rough versions into something natives, or those local to the language, wouldn't find either hilarious or just plain confusing. (As in, "All your base are belong to us.")

Some things are just too precious in their rough versions, like this shirt I almost bought in Barcelona: 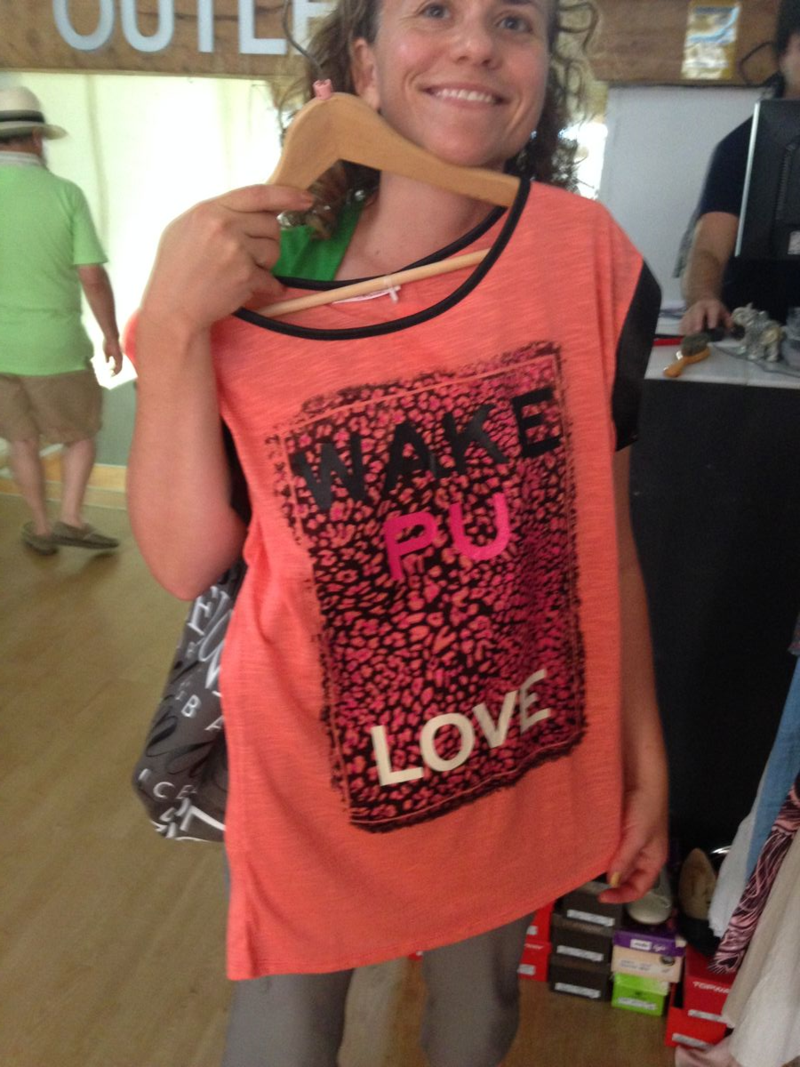 Now I know what to tell my guy in the morning. It works, right? I mean, before his morning constitutional?

What All Teachers Need

The world's most appropriately named drink. 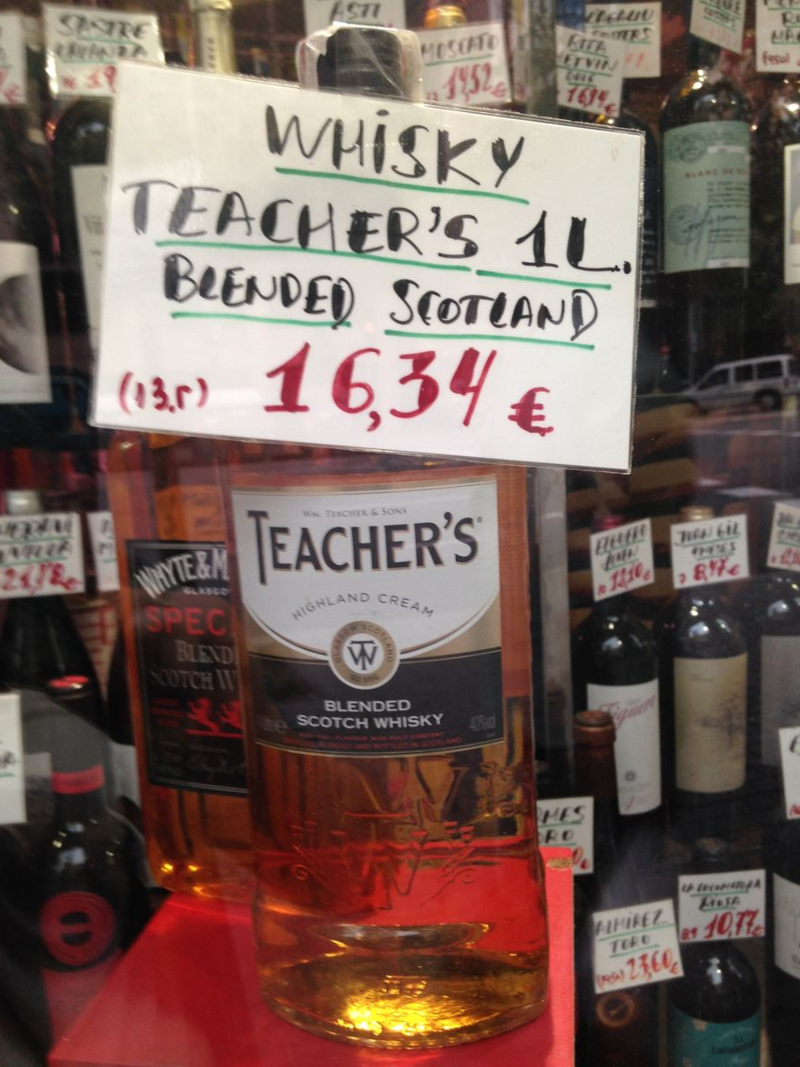 The selfie has got a lot of attention lately (look, they're even doing it at the Hajj!), but what about this much more serious phenomenon: the couple's selfie. As evidence, I present you with this gallery of shame, all taken in Barcelona, Spain.

Here we are at Park Guell:

And at the Picasso Museum:

Next, a couple of couple's selfies taken on a bus tour, adding further shame to the shame. We're even wearing headphones! And that window reflection shot... I can't ever be forgiven for that one. 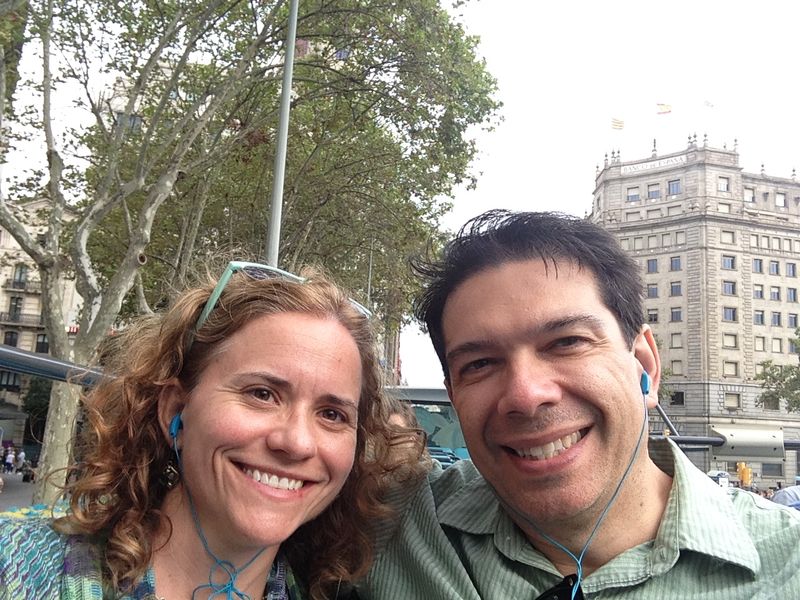 Finally, there's the obligatory beach bar shot. Look, everyone! We're at the beach! On our honeymoon! 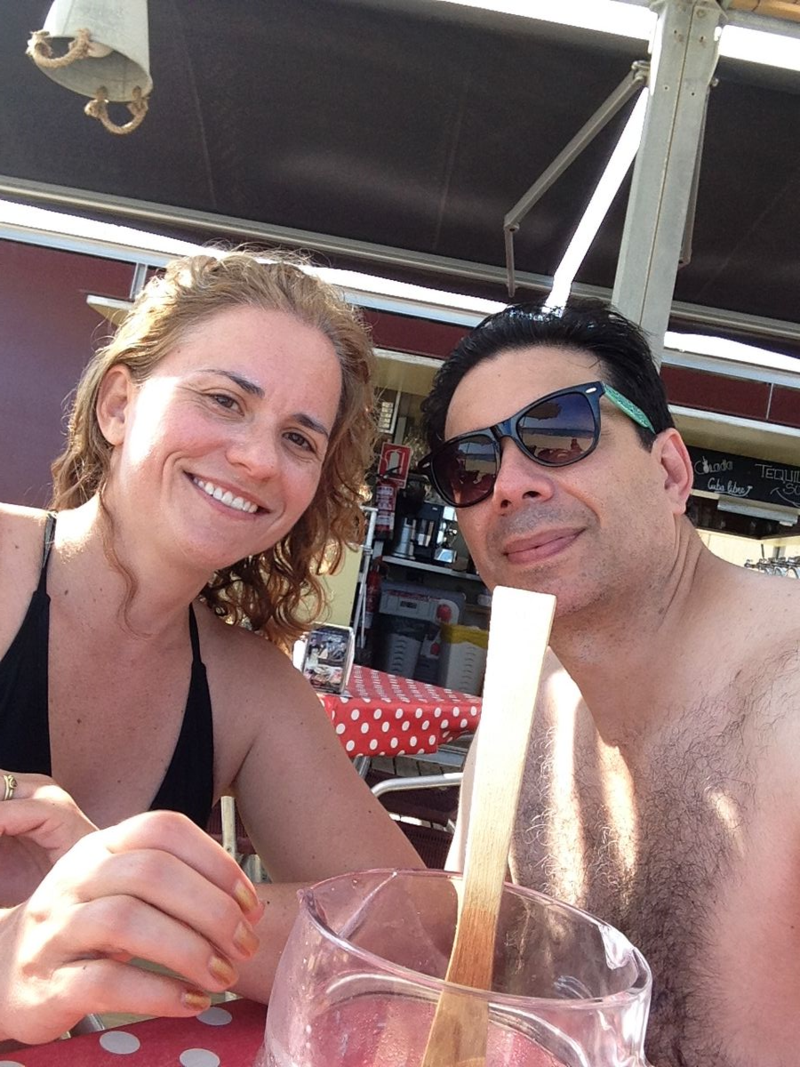