If you're in Barcelona, and you need a sleuth...

Call on this guy. 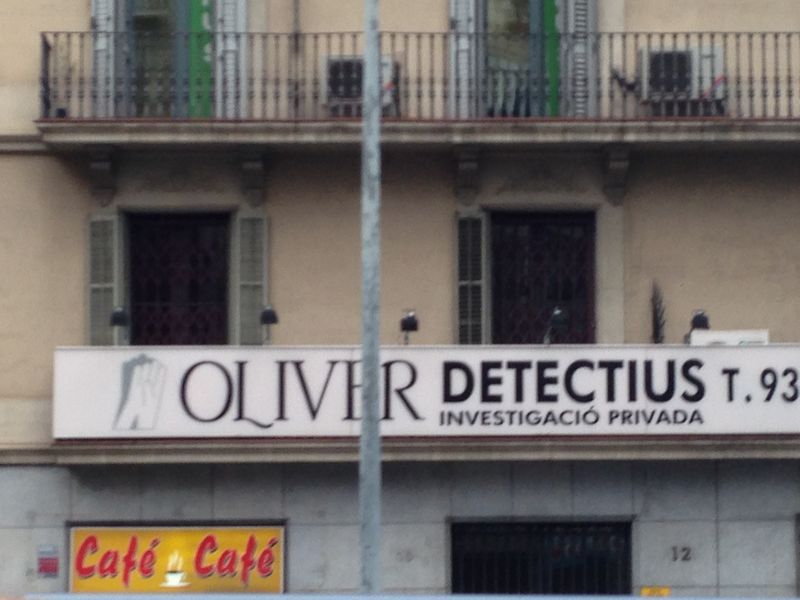 I've never seen a PI in the States advertise so prominently. Then again, maybe this guy isn't very "private."

Maybe I missed something in fashionista-land, but I was a bit bewildered to find that every woman in Barcelona was wearing harem pants, and every store was selling them.

Yeah, I'm talking about the 1980s, M.C. Hammer, drop-crotch variety. You know, the kind that are flattering on exactly no one. And by no one, I mean me. I was only too glad to see harem pants fall by the wayside in like, oh, 1992. But not Barcelonans! They're bringin' 'em back, baby! 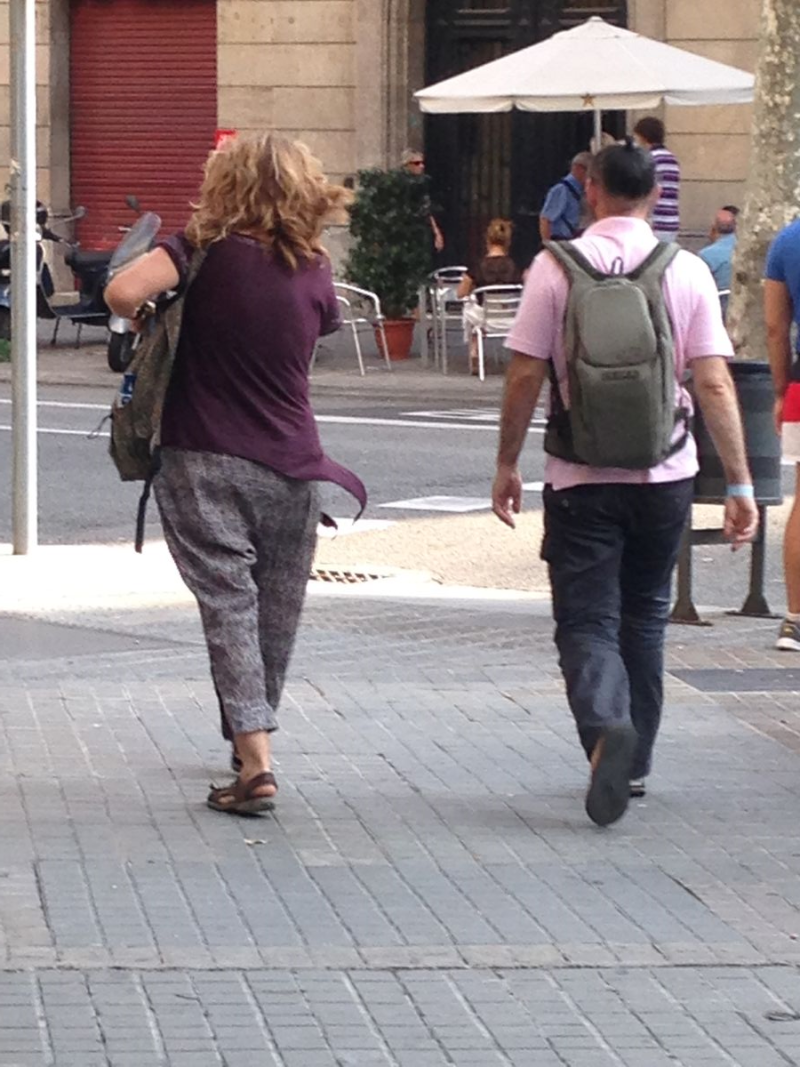 And harem pants apparently go with any type of footwear, including Chuck Taylors.

Another strange thing about being in Barcelona is that everywhere we went, we heard early 1990s music, especially Enya. You remember Enya. What? You don't? Well, this should refresh your memory.

Between the harem pants and Enya, I kept flashing back to my 20s. Which is a weird thing to have happen on your honeymoon, when you're, um, a long way from your 20s.

OK, maybe the harem pants are kind of cute. At least on the hanger. Look, pretty colors! And patterns, wow.

And I bet you can't resist these twinsies.

Protest in the streets of Barcelona! We were hanging out on our balcony in Barcelona, taking in the nighttime view, when we heard chanting from the streets below, and not the kind that comes from monks. So of course we threw on our shoes and went downstairs to see what was up.

Around the corner, a protest was in full swing. 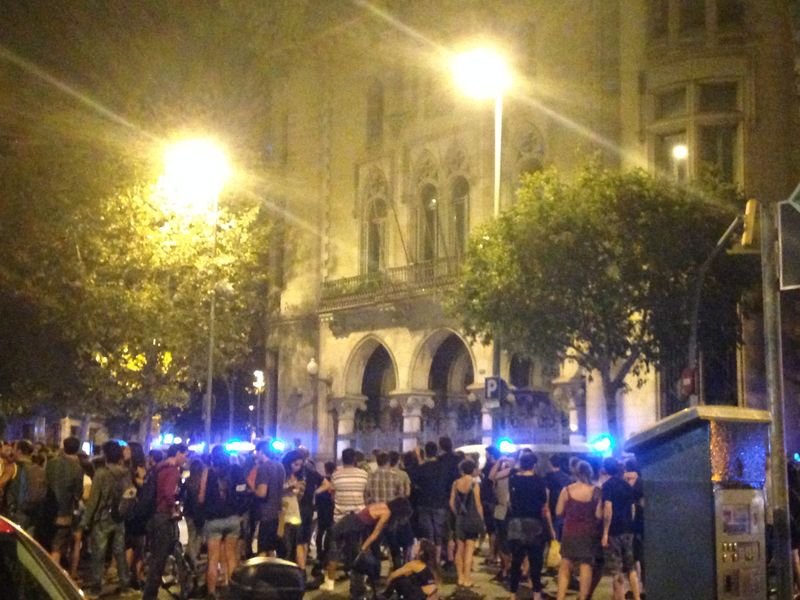 A crowd of students marched the streets and stopped in front of a Barcelona city government building, at which they threw eggs and detonated explosive canisters. The mood was angry at the center of the protest, but social and congenial on the fringes. Many of the protesters walked their bikes as they marched.

At nearby street cafes, Catalonians went on with their coffee conversations, affecting blase glances at the commotion in the street. We asked a man sitting on a park bench right next to the protest, "What's going on?"

He shrugged. "They're students."

"Do you know what they're protesting?" we asked.

He shrugged again. "Who knows? They're students."

La policia was in full force but seemed to be providing protection for the protesters as much as they were making sure they didn't get out of hand. They were several SWAT-style vans in the troupe. 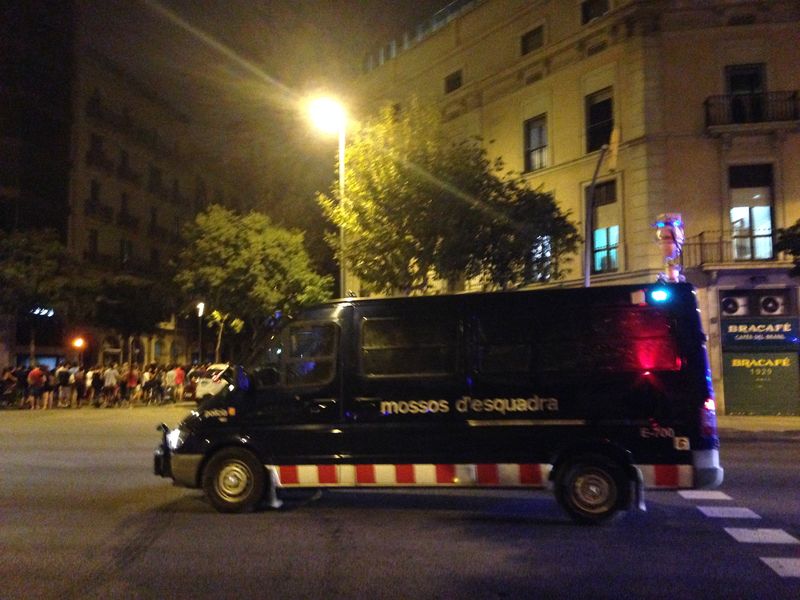 The next day, we discovered that the students had left graffiti behind. They're written in Catalan, which most certainly is not just a dialect of Spanish, but some of the sentiments should be crystal clear even to the uninitiated. 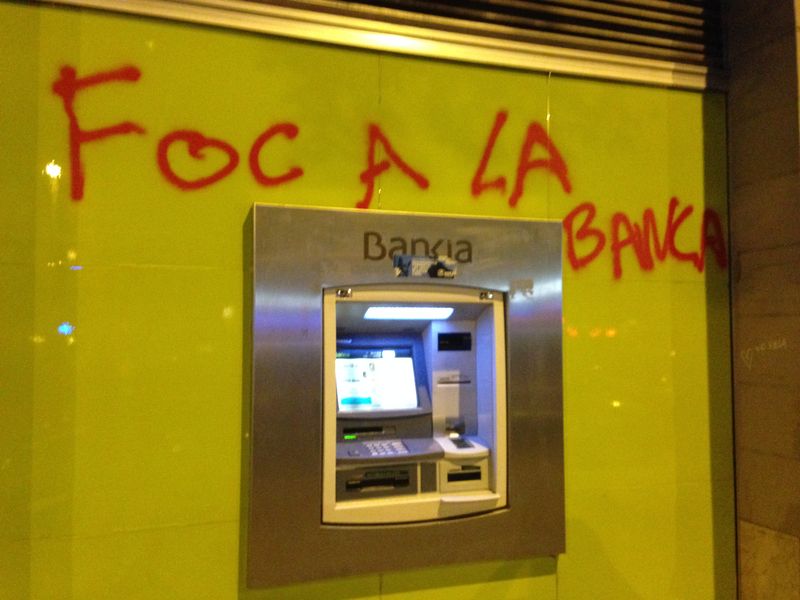 This symbol, which we found out later is tied to the anarchist "occupy" movement internationally, was common.

It turns out the students were protesting policies that make it harder for squatters to occupy vacant buildings and public spaces. You can see by the related articles below that this was a pretty tame protest, compared to the violence that occurred in Barcelona back in May of this year, when a building that had been occupied by leftists for 17 years was cleared out for redevelopment.

So for us, it was a moment of honeymoon adventure. For some Catalonians, it's a matter of liberty.

A few days later, we saw this apartment graffiti in what looks like an activists' flat punctuating the city view at Park Guell. The "okupa" for "occupy" is a strong message across the top of the roof on the lower left: 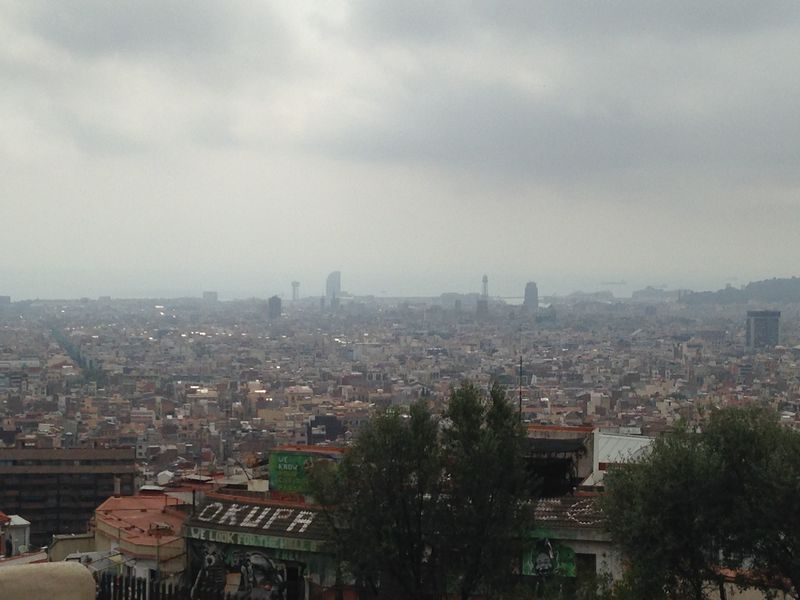 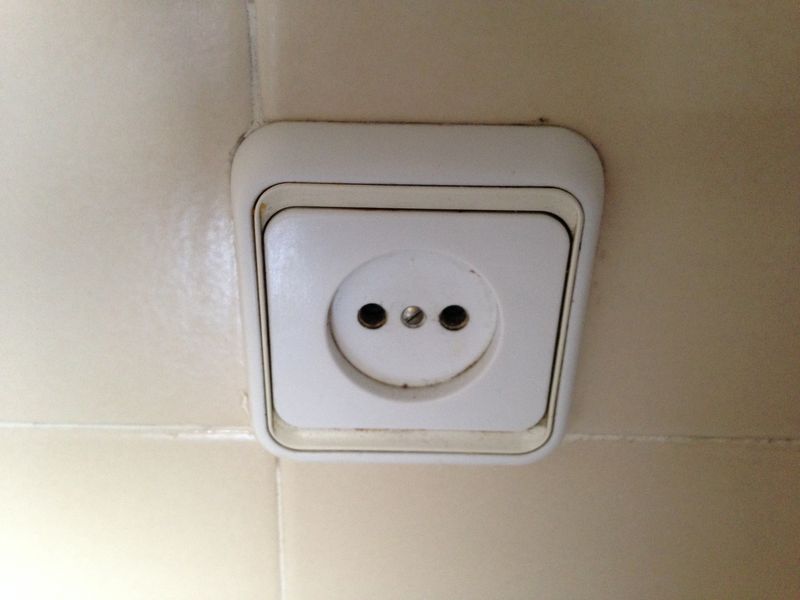 For those of you who've never been out of the U.S., news flash: Electricity apparently has evolved differently in other countries. This is what the outlets look like in Barcelona. Weird, huh?

So if you go over there, and you want to take your phone with you and plug it in, you have to buy one of these.

This message brought to you by the Foundation for the Mundane Aspects of Travel in Other Countries, which also brought you this message.

Why You Should Always 'Keep Looking Up' 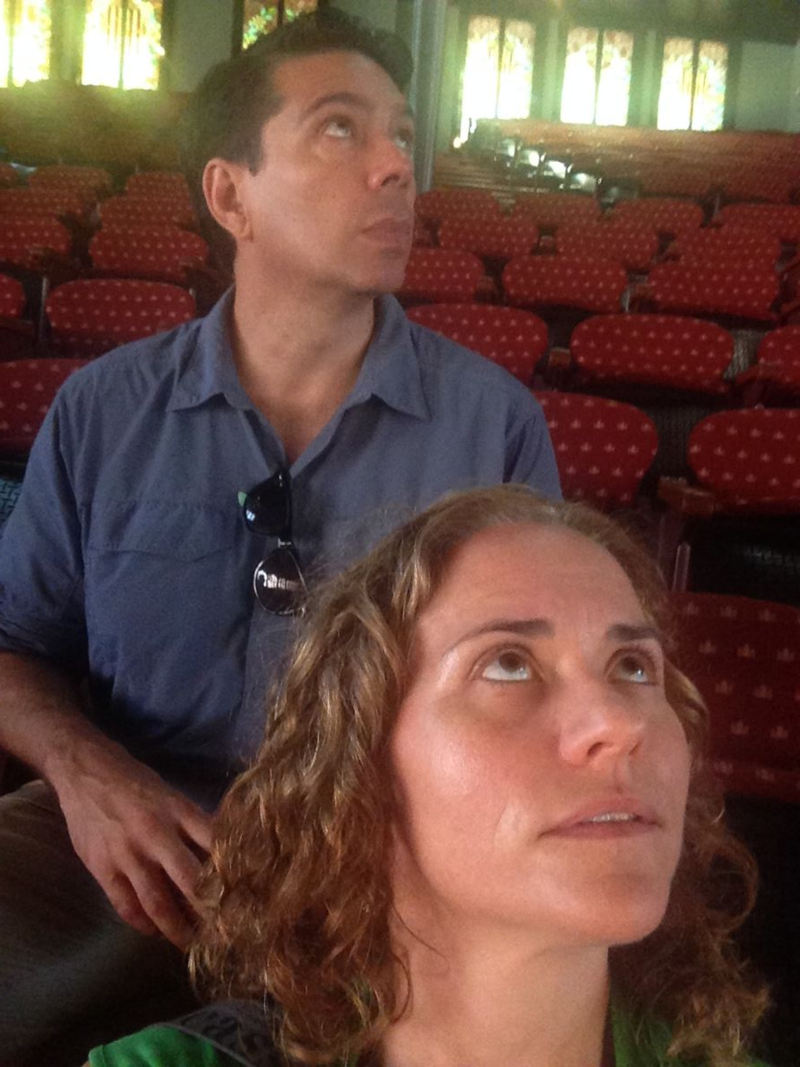 After battling jet lag and a formidable language barrier, conquering a few annoying ailments, getting scammed at an ATM, being yelled at by an indignant Catalan waiter, and finding ourselves in the middle of a street protest, we could have called our honeymoon a disaster. We could have moped around like a couple of Mericans, wanting our money back or cutting our trip short. But we didn't.

Instead, we kept looking up.

It's a valuable and simple message, "keep looking up." PBS' Jack Horkheimer, AKA "the star hustler," used to sign off every episode of his show with that mantra. The man could rock a Members Only jacket AND knows his Betelgeuse from his Van Allen Belt, so he's worth paying attention to, even posthumously.

It's a good thing we took ol' Jack's advice, or we would have missed the Palace of Catalan Music. Or in the local tongue: Palau de la Musica Orfeo Catalan.

I was twice moved to tears by sights in Barcelona, and this was one of them.

Especially for a structure as old as the Palau, which was finished in 1908, it's full of whimsy, as if a pastry chef dancing to the music of "Fantasia" were let loose in a concert hall with a bag of icing. Life-sized pegasus horses emerge from the corners. Chandeliers tilt at jaunty angles. A row of musicians are rendered half in bas relief and half in 2D on stage, as if the drawings have somehow come to life. Those who perform here describe hearing these musicians behind them. 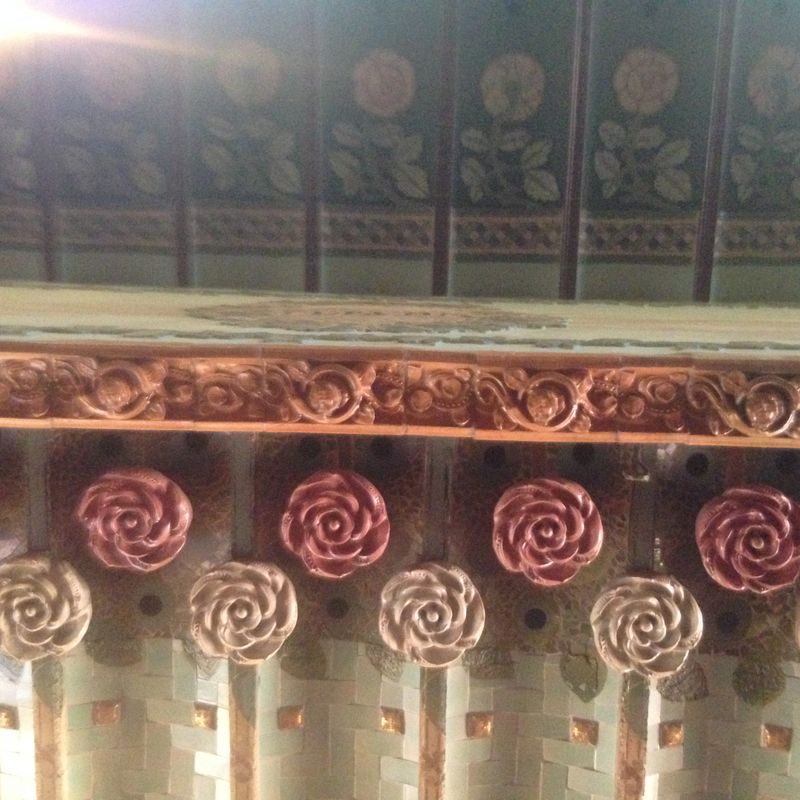 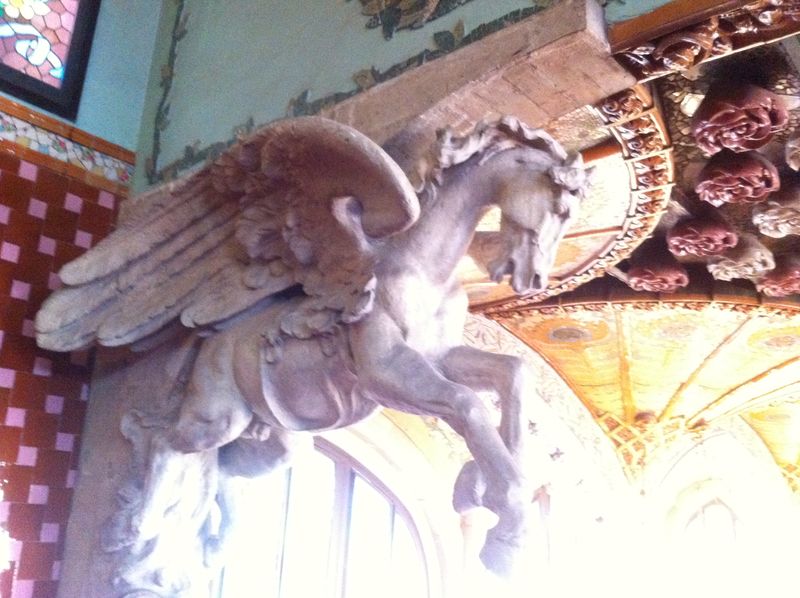 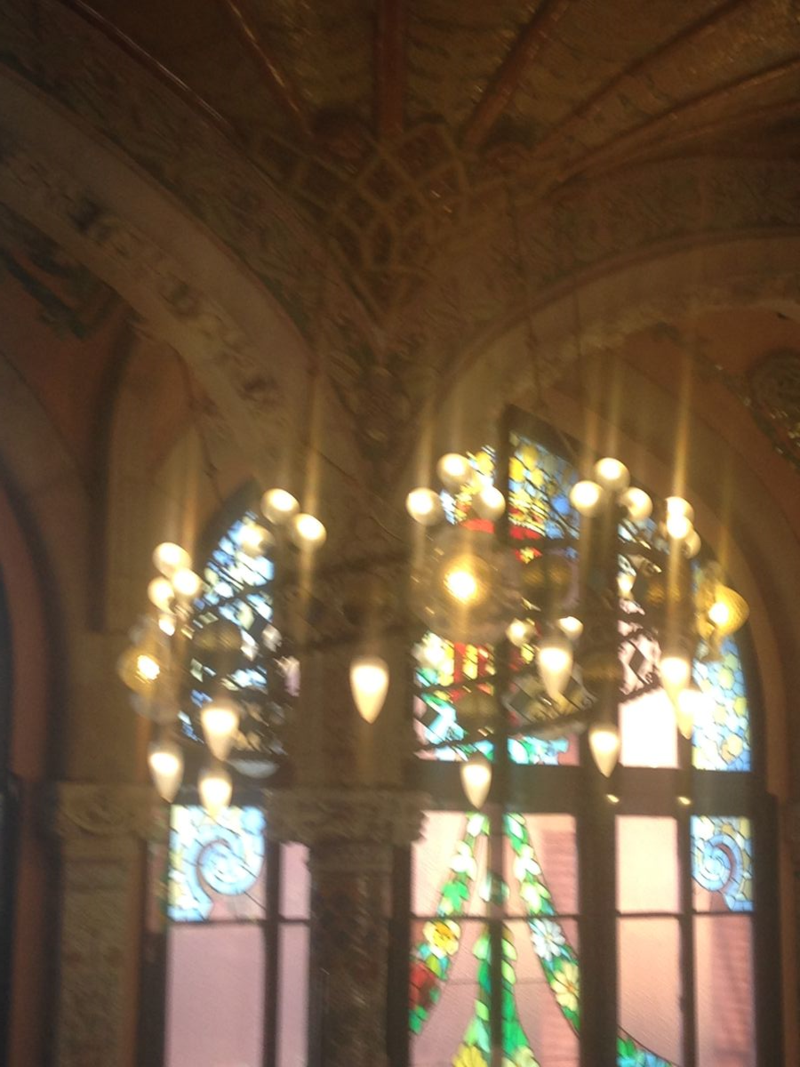 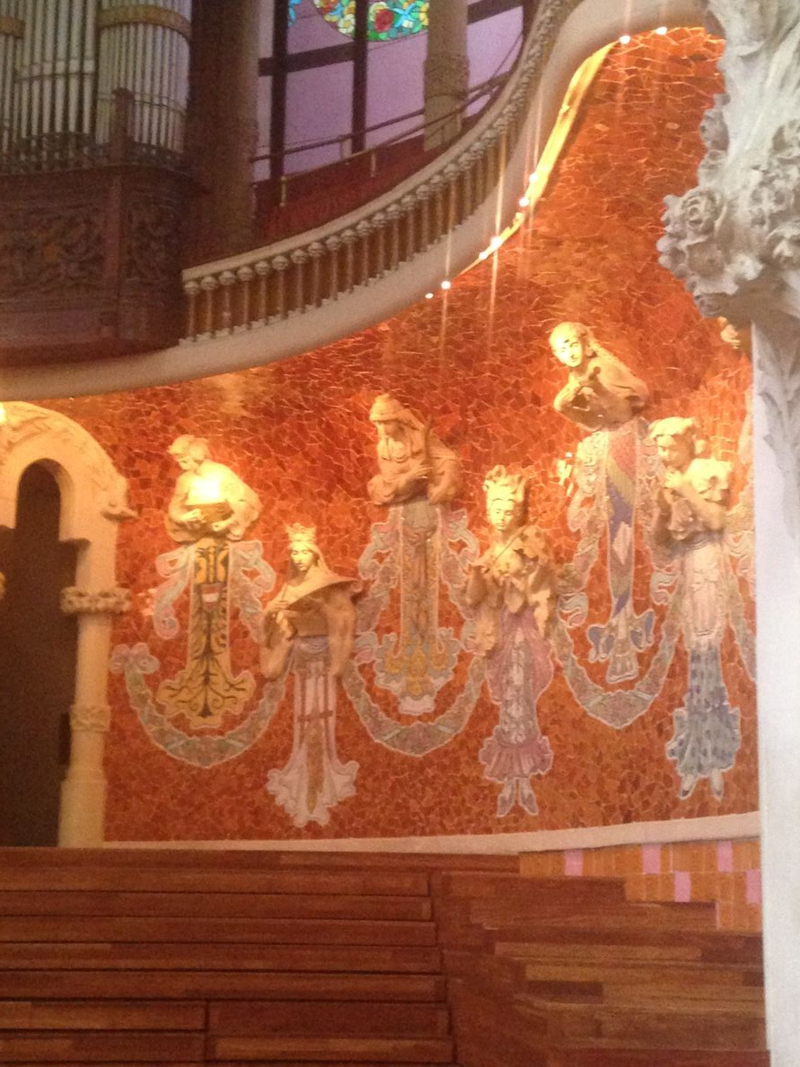 And above it all, a globe of stained glass, like a giant sun, illuminates everything, allowing natural light and color to make the theater glow. 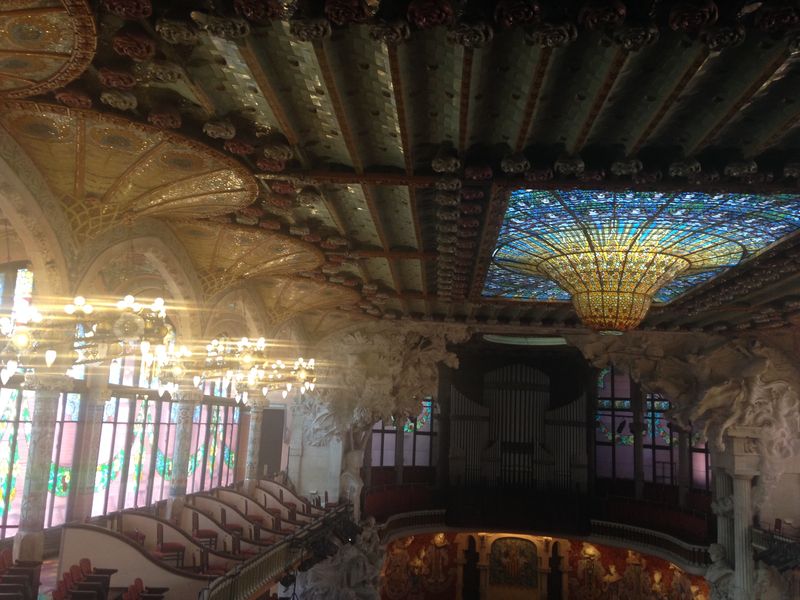 Like La Segrada Familia, the Palau exists solely on private donations, and also like Segrada, it is an example of the cultural pride and passion for the arts that exemplifies Catalonia. The grand choirs of the turn of the last century were the inspiration for its creation, and a roster of world-class performances continues to fill the space with sound befitting its visuals.

I'd go back to Barcelona just to see a concert there.

By the way, I once saw Jack Horkheimer, the star hustler himself, in person. I lived in Miami at the time, and he was the director of the planetarium there. I'd noticed his Member's Only jacket in front of me in line at the Winn-Dixie, and when I walked outside, there he was. It was nighttime, and you know what he was doing?

Standing there in the parking lot, looking up. 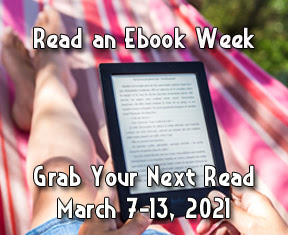